Germany said today it has ‘unequivocal proof’ that Russian dissident Alexei Navalny was poisoned with the nerve agent Novichok.

Tests carried out at a military laboratory found evidence of the Soviet-era chemical weapon that was used to attack Sergei Skripal in Salisbury in 2018.

Navalny remains in a coma in a Berlin hospital nearly two weeks after collapsing on a plane in Siberia which made an emergency landing when he suddenly fell ill.

Germany today condemned the ‘alarming’ poison plot and demanded an urgent explanation from Moscow, which has denied any involvement in Navalny’s illness.

Russian opposition leader Alexei Navalny – pictured, centre, shortly before he fell ill on August 20 – is in a coma at a German hospital after allegedly being poisoned

Germany says it will inform its partners in the EU and Nato about the test results and consult with them ‘on an appropriate joint response’.

Russia’s ambassador in Berlin will also be called in to hear about the test results – after the Kremlin played down preliminary findings that Navalny was poisoned.

In an initial response, Kremlin spokesman Dmitry Peskov told Russian media that Moscow had not yet been informed of Germany’s findings.

Friends of Navalny have suggested his tea was spiked in an airport cafe in Tomsk where he was pictured shortly before boarding the flight.

A former Soviet scientist separately suggested that assassins could have broken into Navalny’s hotel room and sprinkled poison on his clothes.

After Navalny fell ill, the aircraft made an emergency landing in Omsk and the Putin critic was initially taken to hospital in the Siberian city.

The following weekend he was transferred to Berlin, where doctors have been treating him with the antidote atropine.

Berlin’s Charite hospital said in an initial statement last week that clinical tests ‘indicate poisoning with a substance from the group of cholinesterase inhibitors’, which are used in medicines and insecticides but also in nerve agents.

‘The specific substance involved remains unknown, and a further series of comprehensive testing has been initiated,’ the hospital said.

Putin’s spokesman Dmitry Peskov said last week that allegations of Kremlin involvement ‘absolutely cannot be true and are rather an empty noise’.

Peskov accused the German medics of ‘rushing’ to use the word poisoning, saying: ‘For the moment, all you and I see is that the patient is in a coma.’

‘We don’t understand why our German colleagues are in such a hurry. The substance hasn’t yet been established,’ he told reporters.

But Germany’s announcement today said that toxicological tests at an army laboratory had found ‘unequivocal evidence’ of a nerve agent in the ‘Novichok family’.

The military specialists were called in at the instigation of Charite hospital medics, government spokesman Steffen Seibert said.

Angela Merkel and her top ministers discussed the findings this afternoon and the government says it ‘condemns this attack in the strongest terms’.

‘You can’t buy this drug in store. Russian authorities stand behind this. Those responsible for such a cynical crime must face consequences,’ he said.

Navalny’s wife Yulia, who has visited him every day in hospital without making any public comment, has also been informed of the test results.

Navalny’s allies have pointed the finger at Russian president Vladimir Putin (pictured) after the opposition leader fell ill, but the Kremlin has dismissed the claims 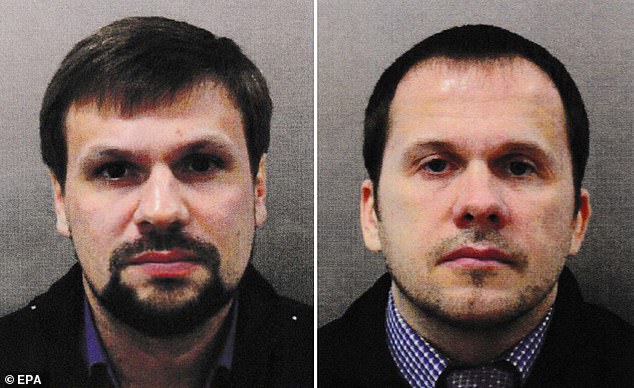 Uglev, 73, said Russian secret service operatives could have broken into Navalny’s hotel in Tomsk to leave a minuscule drop of poison in his luggage.

He said a dose of toxin less than one-thirtieth the size of a drop of water might have been enough to poison Navalny.

‘They put this substance on his underwear, his underpants, socks, or his undershirt, and that was it,’ said the retired scientist.

‘In the morning Alexei woke up, showered, got dressed and went to the airport.

‘And since the substance acts slower via the skin than say through the digestive system, time passed [before it had an impact].’

Uglev ‘categorically’ denied that Novichok was used to hit Navalny, saying that more people would have suffered poisoning if it had been.

Uglev has previously spoken of his role in creating Novichok, the nerve agent believed to have been used to poison Sergei and Yulia Skripal in Salisbury.

The former double agent and his daughter were found slumped on a park bench in March 2018, causing a sensation when their identities were revealed.

Russia denied involvement but the poison plot sent Britain’s relations with Moscow to their lowest point since the end of the Cold War.

Both Skripals survived and their current whereabouts are unknown, but a British woman later died after accidentally handling the discarded nerve agent. 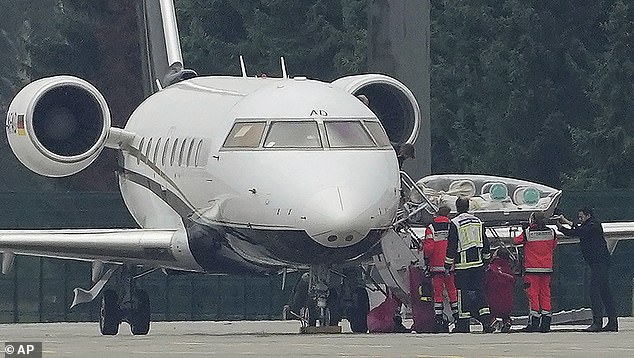 Navalny arrives at Berlin’s Tegel Airport last Saturday after he was airlifted from Russia. He remains in a medically induced coma at the German hospital

Alexei Navalny, pictured with his wife Yulia, has been a thorn in the Kremlin’s side for years 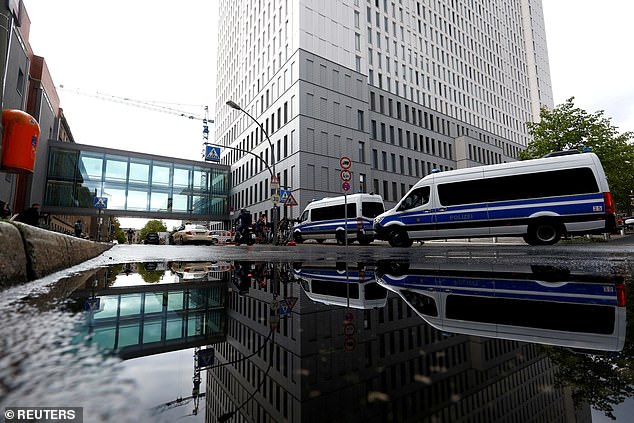 German medics have also asked for assistance from authorities in the UK and Bulgaria, both with experience of previous poisonings.

Russian foreign minister Sergei Lavrov yesterday rejected claims that Russia was failing to investigate how Navalny fell into a coma.

‘We are being accused of not investigating this situation. This is not true,’ he said.

A full probe would begin once it is determined what happened, he said, while adding that German medics were also uncertain how Navalny became sick.

Navalny has been a thorn in the Kremlin’s side for more than a decade, exposing what he says is high-level corruption and mobilising protests.

He has been repeatedly detained for organising public meetings, sued over corruption investigations and barred from running in the 2018 presidential election.

The 44-year-old has also served several stints in jail in recent years for organising anti-Kremlin protests.

The European Court of Human Rights has ruled that Russia’s arrests and detention of Navalny in 2012 and 2014 were politically motivated.