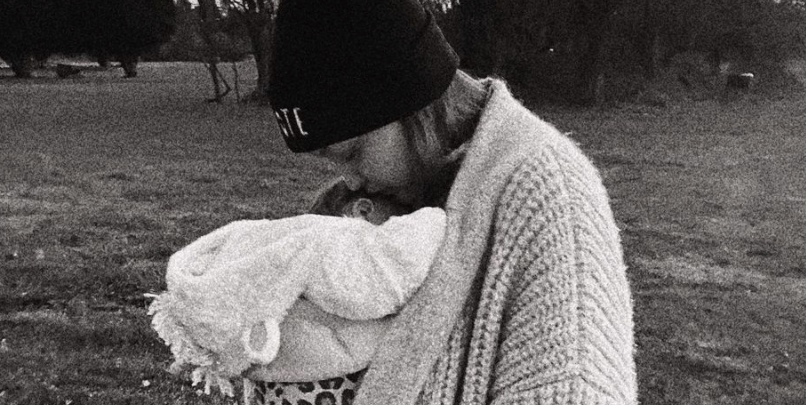 Gigi Hadid Steps Out With The Freshest Winter Haircut

NEW YORK, NY – JANUARY 09: Model Gigi Hadid is seen walking in Soho on January 9, 2018 in New York City. (Photo by Raymond Hall/GC Images)
Gigi Hadid is officially the latest celebrity to jump on the curtain-bang trend. The model and new mom shared a selfie on Instagram showing off her new cut while welcoming the sudden winter weather in New York. “Fresh snow, fresh cut,” Hadid captioned the selfie, posted today. In the photo, she wears her hair up in a bun, with her new curtain bangs soft and wispy around her face. Hadid attributed her new look to hairstylist Alie Hernadez, who reposted Hadid’s photo to her own Instagram Story with the clever caption, “Banging.”
Hadid’s curtain bangs are a happy medium length for the trend, which ranges from brow-grazing fringe to chin-length layers. The long, wispy bang has become popular with countless celebrities lately, likely because it’s a versatile style that looks great on everyone. No two sets of curtain bangs are exactly the same: You can easily opt for a subtle fringe just above the eyes or highlight a different feature on your face such as your cheekbones, à la Gigi Hadid. View this post on Instagram A post shared by Gigi Hadid (@gigihadid)
The ’60s-inspired look, which has repeatedly seen surges in popularity over the years, was brought back into fashion earlier this year, thanks in part to TikTok. As far as bangs go, the curtain style is more low-maintenance because they won’t show growth quite as quickly as bangs going straight across your forehead. If you’re tempted to try the cut for yourself, there’s no shortage of inspiration to bring to your hairdresser. “There’s never a wrong time to get a fringe,” celebrity hairstylist Mark Townsend told Refinery29 back in August, when it seemed like our For You Pages were flooded with stunning curtain-bang transformations.
So, if you were looking for one more reference photo of curtain bangs to show your stylist before you finally took the plunge, consider this a sign.
Like what you see? How about some more R29 goodness, right here?Britney Spears Just Brought Back Her Iconic CutDoes Blonde Hair Mean New Music From Zayn Malik?Moody Blue Hair Is The Coolest Shade For Winter