A shock new report has ‘significant concerns for community safety’ on the Gold Coast with future bushfire seasons set to be even worse than the last.

The new fire officer’s report comes as the state-funded Queensland Fire and Emergency Services (QFES) refused to extend its contract with the Gold Coast City Council, which is set to expire in June 2022.

The Gold Coast City Council now has to find a new contractor capable of providing the same level of professional service as the QFES, which could take years.

This will leave the Queensland Rural Fire Service, which is the QFES volunteer branch, alone in battling bushfires in just over a year if no replacement is found. 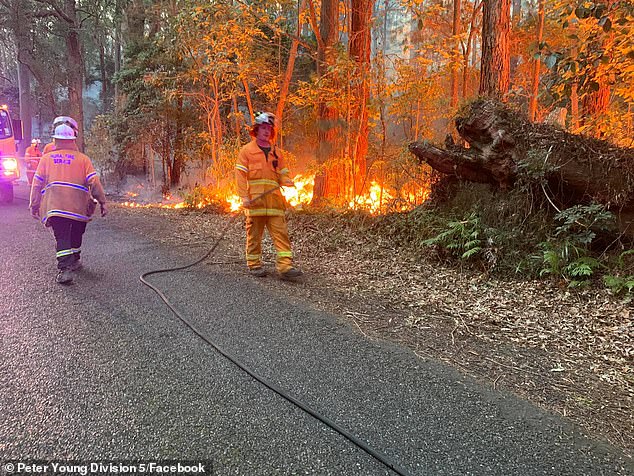 Gold Coast councillor Peter Young took pictures of his fellow volunteer firefighters battling a blaze in Springbrook in August. Mr Young has seen a new officer’s report that has a ‘very bleak’ outlook for the future of bushfires in the region

The new officer’s report has been discussed privately by city councillors but is yet to be publicly released.

Councillor Peter Young, who is also a volunteer with Guanaba Rural Fire Service, said he was concerned by the report findings.

‘There is absolutely no doubt whatsoever the conditions are worse, and worsening. The information I’ve seen within the brigade is very bleak (about weather, fuel loads and wind),’ he told The Gold Coast Bulletin.

Councillor Young recently fought an ‘intense’ fire with the Guanaba Rural Fire Service in Springbrook, one hour southwest of the Gold Coast, on August 28.

‘We were backburning. Some guy had lit a fire on his property and it got out of control. It was erupting in flames, really hot and moved relatively quickly. I expect there are huge areas in a similar condition,’ he said.

Having spoken to experienced firefighters, Councillor Young said they also believe the threat will only increase due to vast bushland next to homes and global warming. 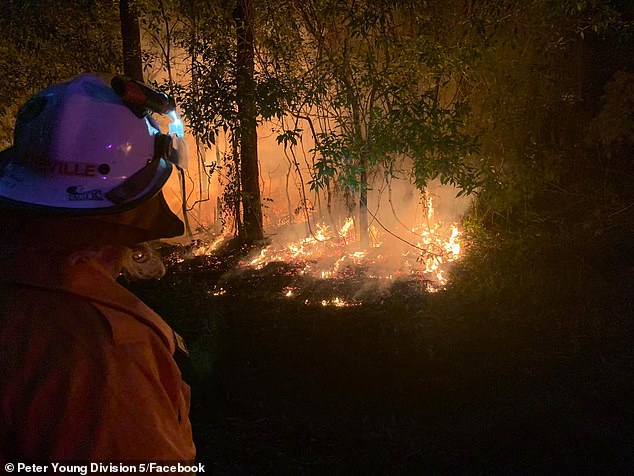 Another picture taken by Councillor Young of the Springbrook fire. Mr Young is a volunteer with Guanaba Rural Fire Service and says it was an ‘intense fire’ 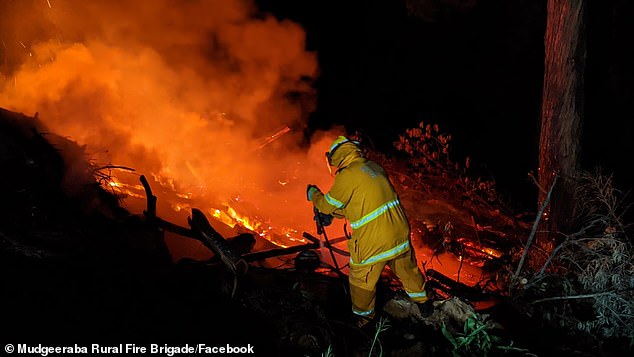 The Gold Coast City Council has so far refused to introduce a levy to fund rural fire services but brigades and residents are concerned there won’t be enough funding.

Mr Young said the future of bushfire management should be a huge issue in the next state election, which is set for October 31.

Gold City Council and the Queensland State Government have run a joint-hazard burn reduction program since 2007.

Firefighters attack around 25 per cent of hazard areas, much of bush it near homes, by conducting 10 to 14 burns each year.

But many joint initiatives, which take two to three years to implement, have been stalled due to the contract dispute between the council and the state government.

Two burn teams working during the winter, improving access for fire trucks, increasing the number of water tanks, updating technology and community education are just some of the initiatives that have been stalled. 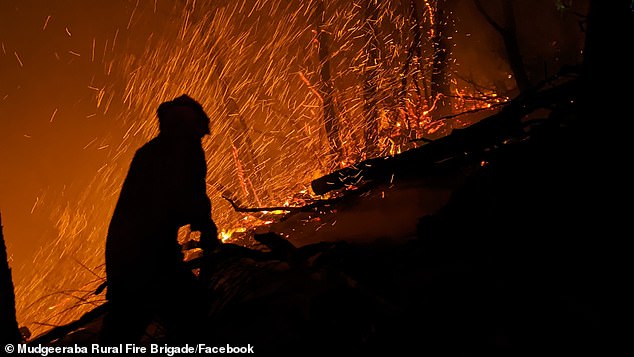 A volunteer battles a blaze as embers are blown with the wind at the Springbrook fire. Rural fire brigades on the Gold Coast could be on their own once the QFES contract ends in 2022 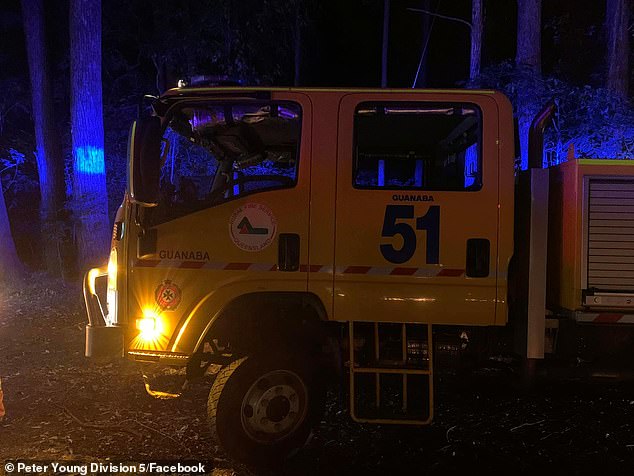 The Guanaba Rural Fire Service truck. There are concerns rural fire brigades, which are run by volunteers, do not have enough funding to battle bushfires

During the previous bushfire season, blazes burnt across 2,500,000 hectares and destroyed 48 homes in Queensland.

In the Gold Coast hinterland, a bushfire destroyed 11 homes, the historic Binna Burra Mountain Lodge and its surrounding cabins in September 2019 – months before bushfires peaked in NSW and Victoria.

While the Queenland fires were devastating, bushfires in NSW burned across more than double the amount of land, totalling 5.4 million hectares.

A total of 2,439 homes were lost and 25 people were killed in the NSW blazes.

The last fire of the season was in Lake Clifton, Western Australia, in early May.

In total, the bushfires burnt across 18.6 million hectares of land, destroyed 5,900 buildings, including 2,779 homes and killed at least 34 people. 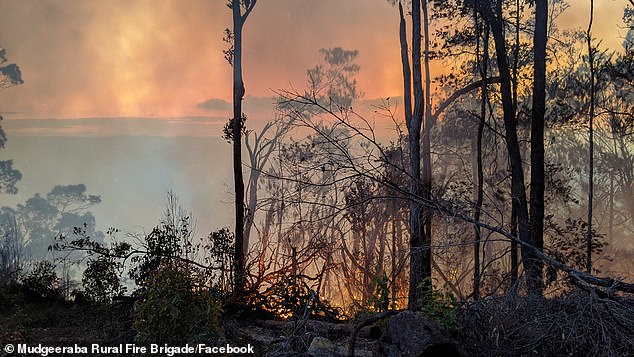 Smoke in the air during the Springbrook fire. Officials warned that failure to act will result in another ‘catastrophic’ bushfire season like the most recent one, which began in June 2019 and lasted until May 2020 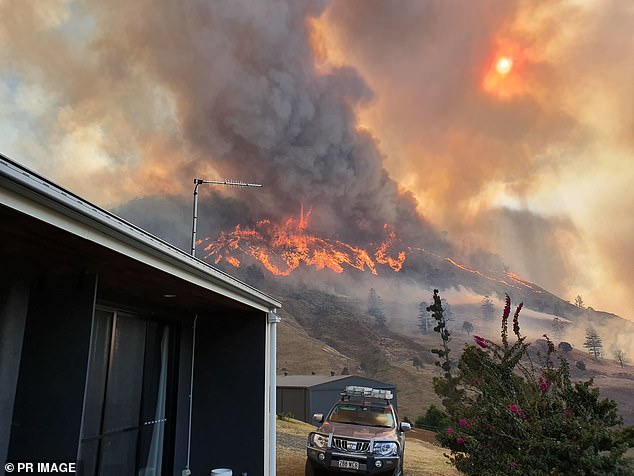 A fire burning in Illinbah, Queensland in September last year. During this bushfire season, blazes burnt across 2,500,000 hectares and destroyed 48 homes in Queensland

Council mapping estimates that 37 per cent (51,051 hectares) of the Gold Coast region is at medium to very high hazard of bushfires.

In July, the United Firefighter Union Queensland pleaded for $100million of COVID-19 funds to diverted to employ 350 emergency staff ahead of the bushfire season.

Officials warned that failure to act will result in another ‘catastrophic’ bushfire season like the most recent one, which began in June 2019 and lasted until May 2020.

‘There is an immediate need for a significant increase in the number of full-time professional firefighters in Queensland,’ fire union boss John Oliver said in a parliamentary proposal.

‘In short, the Queensland Government’s COVID-19 response efforts are, without doubt, at risk of being significantly hampered by what is clearly a trend of natural disasters increasing in both frequency and intensity.’

This week, the Queensland state government announced it would budget a total of $47 million to rural brigades in 2020-21. 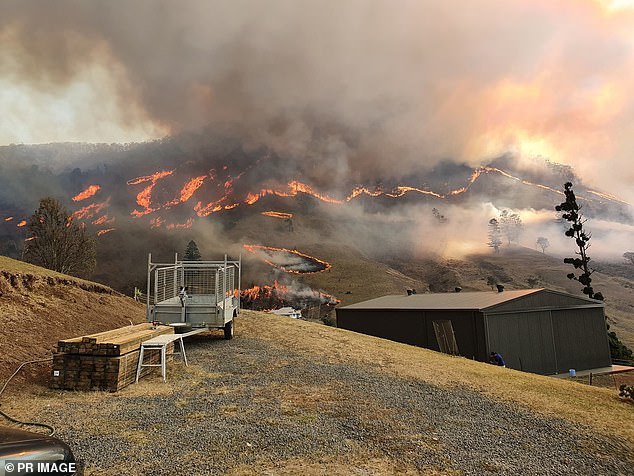 Another view of the Illinbah fire. In total, the bushfires burnt across 18.6 million hectares of land, destroyed 5,900 buildings, including 2,779 homes and killed at least 34 people across the country during the 2019-20 season