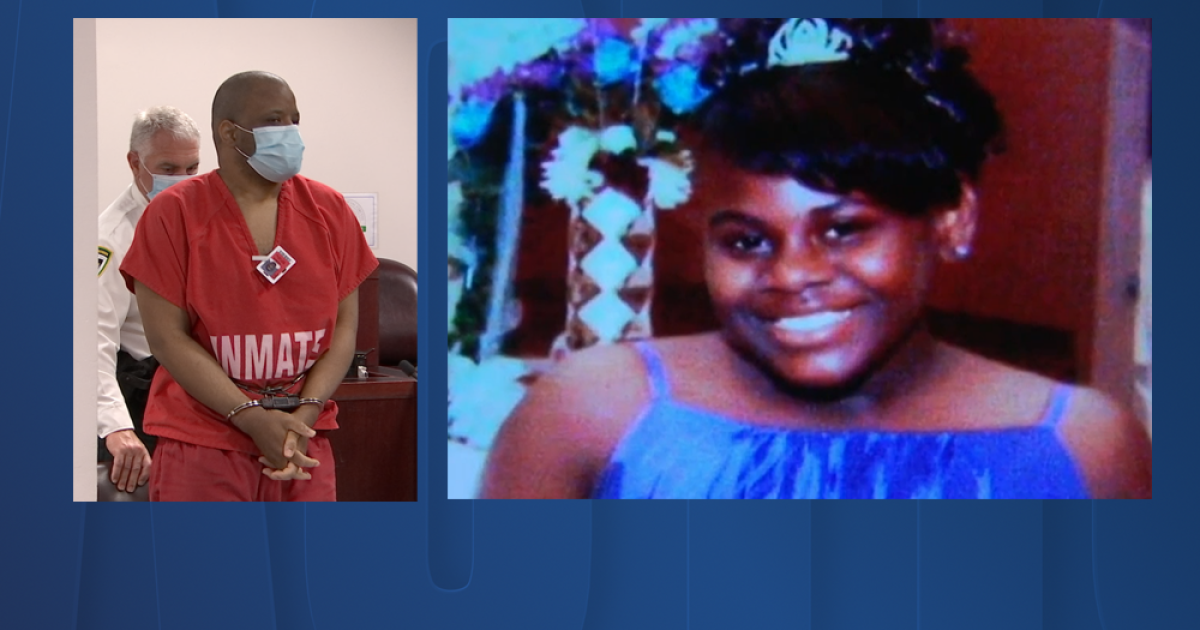 HILLSBOROUGH COUNTY, Fla. — Granville Ritchie will face death for the rape and murder of 9-year-old Felecia Williams, a judge decided on Friday.

During the sentencing hearing, several family members of Williams spoke including her mother, grandmother, father and older sister.

“I’ve waited 2,310 days for this day to come,” said Felecia Demerson, Williams’ mother, “I am here to stand as a wounder mother. I’m here wearing all black because I’m here to bury [Ritchie] today.”

Demerson showed a blanket she carries with her daughter’s picture on it. She says she wraps herself in it whenever days get tough. On her shirt, she had a Hello Kitty pin, her daughter’s favorite.

“I wake up I think about her. I lay down and I think about her,” Demerson said. “The only thing I regret today is I cannot ask for his fate and that would be for him to be hung. For him to feel what my daughter felt over and over again.”

Williams’ older sister, Shakeila Givens, cried during her impact statement and said, “She meant the world to us and he discarded her like she was nothing. Every dog has their day and your day has come. God has you now.”

In a stunning moment in court, Williams’ father, Jerome Williams, told Ritchie he forgave him.

“I forgive you bro, that’s how strong my God is. I come here and smile with no ill will. You are my brother. You made a mistake. You’ve got time to make right with God.”

After handing down the sentence, Judge Michelle Sisco addressed Ritchie.

“If you do ever pray to a higher power, either now or at some point before the date of your death is scheduled to occur, and you truly seek forgiveness, and redemption for the sins and the crimes you have committed, I hope that you are granted it,” Sisco said. “May God have mercy on your soul, Mr. Ritchie.”

In September 2019, the jurors unanimously agreed Ritchie should face the death penalty. Per Florida law, the jury had to be unanimous, otherwise, Ritchie would have spent the rest of his life in prison.

In 2014, the body of Williams was discovered off the Courtney Campbell Causeway.

An investigation revealed family friend Eboni Wiley brought Williams to Ritchie’s apartment on May 16, 2014. She testified that she left the little girl alone with him to go buy marijuana. When she came back, she says Williams was gone. Wiley testified that Ritchie told her he let the child walk to CVS to buy candy, but there was no sign of her there.

Wiley faces her own trial next month for her role in lying to police.

Prosecutors say evidence showed Ritchie strangled Felicia and used a suitcase to dispose of her body leaving her naked and battered by rocks along the mangroves.

Ritchie’s lawyer argued his brain scans show “abnormalities” and did not have a serious criminal record before he killed Williams.

Prosecutors called on its own doctor who argued Ritchie’s brain was normal and provided a psychiatrist who testified Ritchie has anti-social personality disorder making him more prone to deceit, manipulation and lack of empathy.

A key piece of evidence helping to sway the jurors toward a guilty verdict and later a death penalty sentence was the 911 call the little girl made when she was inside the Temple Terrace apartment with Ritchie.

“In Florida, we reserve the death penalty for the worst of the worst offenders and if the brutal rape and murder of a 9-year-old doesn’t meet that definition, I don’t know what does,” he said.

Ritchie’s sentence will now be automatically reviewed by the Florida Supreme Court as is required by law in all cases with a death sentence.

The victim’s father believes Ritchie will have to answer to a higher authority.

“You get on your knees and pray because the journey you got ahead of you, you’re going to need God.”