Channel 4 has unveiled the 12 home-bakers competing in the eleventh season of The Great British Bake Off, due to hit screens on September 22.

The new batch of hopefuls boasts are as diverse as ever, with the line-up including a pantomime producer, a radiographer, an armoured guard, and an amputee who uses baking as a form of therapy.

This year’s edition will see Matt Lucas make his debut as he replaces Sandi Toksvig to host alongside comedian Noel Fielding and judges Paul Hollywood and Prue Leith.

The upcoming series took place at a private location in Essex after five years of filming at Welford Park in Berkshire, with all cast and crew members undergoing regular COVID-19 testing in an isolation bubble amid the pandemic. 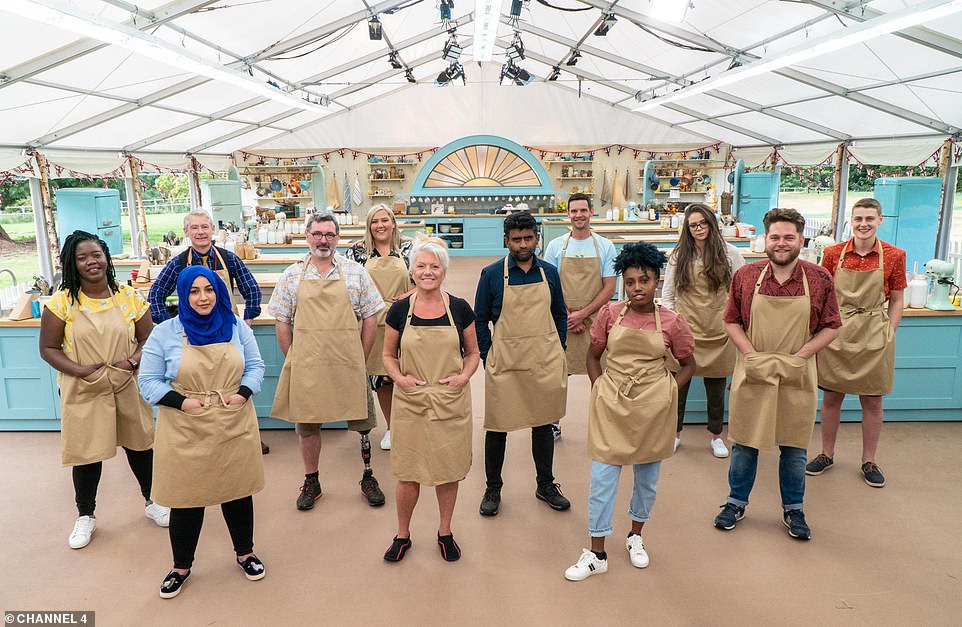 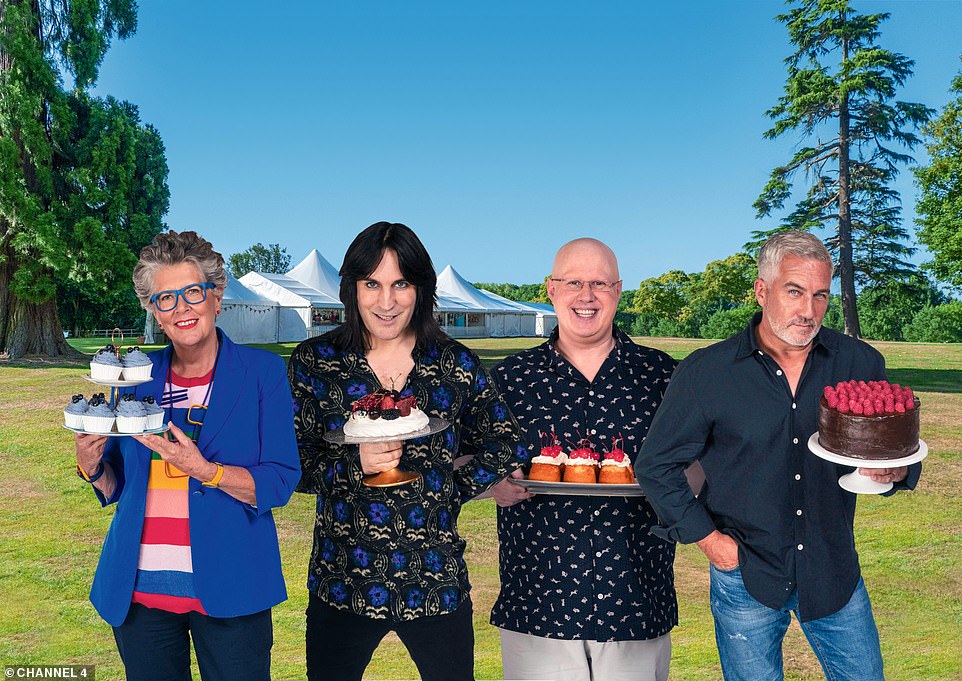 Fantastic four: This year’s edition will see Matt Lucas make his debut as he replaces Sandi Toksvig to host alongside comedian Noel Fielding and judges Paul Hollywood and Prue Leith

Marc, 51, from Cornwall, joined the series in a bid to defy the odds after losing his leg in a motorbike accident in 2016.

The bronze resin sculptor credits baking cakes and pastries for healing the mental strain of his injury, after spending his youth climbing mountains across the globe.

Supported by his daughters, the single parent – who became a landscape photographer once he settled back in the UK – has managed to take up the sport again, four years after the incident.

‘I was incredibly excited, happy and very very nervous’, the support worker said of his time in the famous Tent. ‘[A special memory was] being surrounded by 11 other great people, all in the competition with me, and I just remember feeling the very positive and exciting energy in the tent.’ 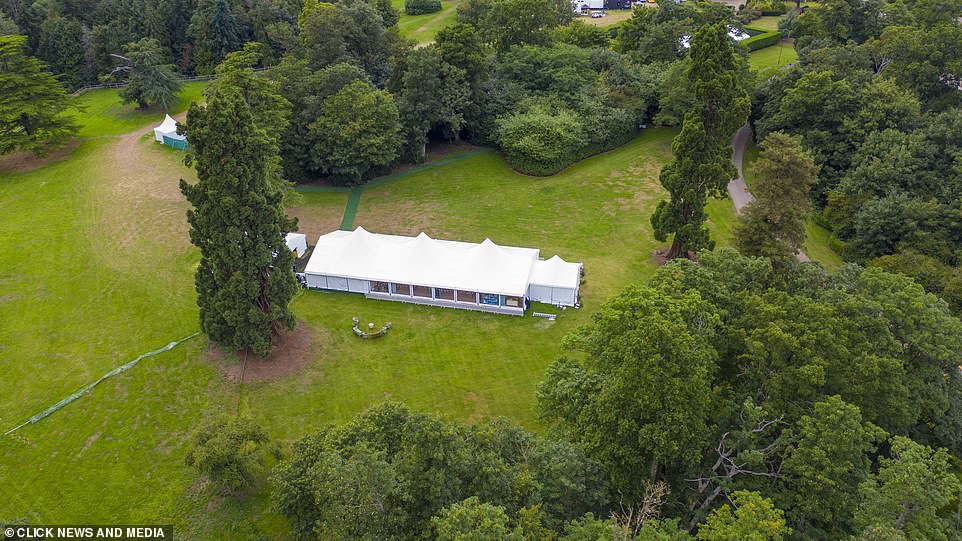 In with the new: The upcoming series took place at a private location in Essex after five years of filming at Welford Park in Berkshire 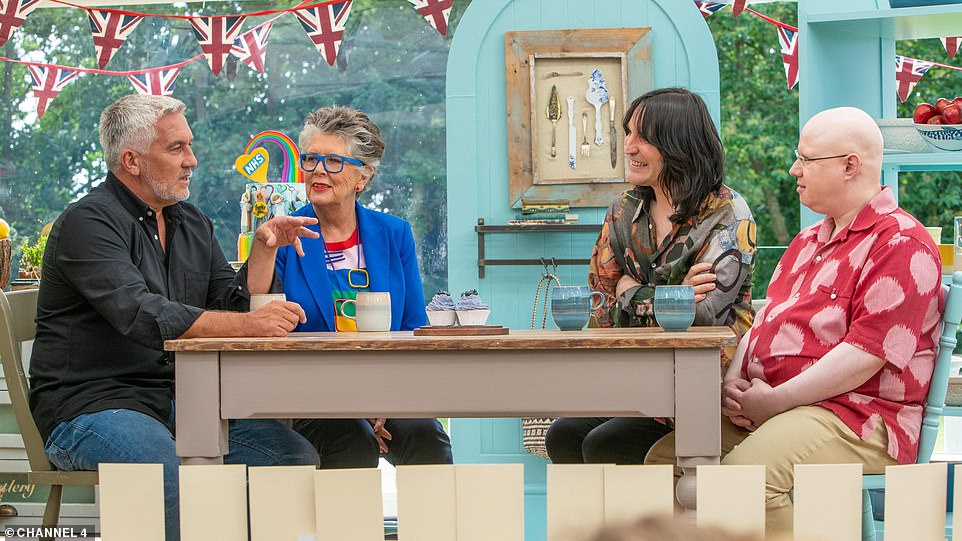 Strict rules: All cast and crew members undergoing regular COVID-19 testing in an isolation bubble amid the pandemic

Panto producer Lottie, 31, from West Sussex, has branded herself a ‘perpetually frustrated perfectionist’ who believes she’s inherited her love for baking from her Lancastrian great-grandmother.

While timing and decoration are her downfalls, the yoga enthusiast prides herself in being a fast-learner with refined skills.

Detailing her experience of working in the Tent, Lottie said: ‘Coming straight out of lockdown into another lockdown was weird but totally worth it and that first morning was utterly terrifying! As soon as I saw the tent it all started to feel a bit too real!’

The show will also see diagnostic radiographer Loriea, 27, from Durham compete for the top prize. Born and raised in Jamaica, the brainbox moved to the UK when she was 15 and started baking 10 years earlier with help from her grandmother. 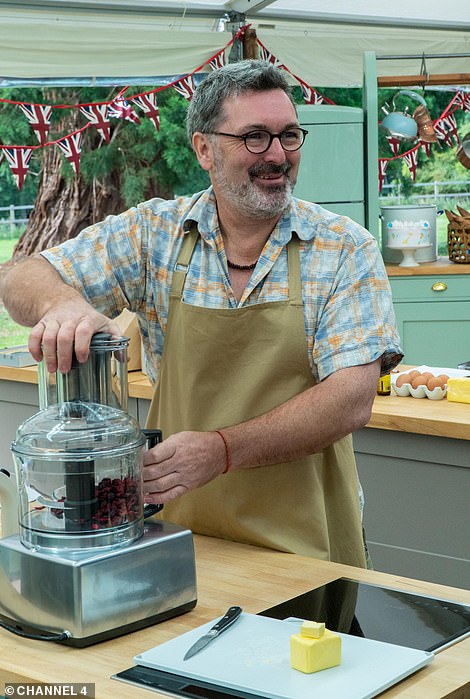 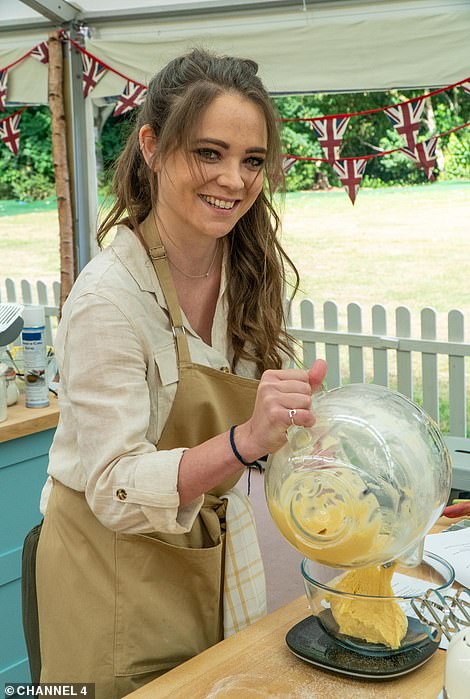 Diverse: (L-R) Marc, 51, from Cornwall, joined the series in a bid to defy the odds after losing his leg in a motorbike accident in 2016, while panto producer Lottie, 31, from West Sussex, believes she’s inherited her love for baking from her great nan

The macramé-loving contestant uses baking as a way to express her appreciation for her Caribbean background, and often puts a spin on traditional recipes by infusing her creations with chillies, coconut and cinnamon.

Commenting on how well the competitors have got on, Loriea – who ‘struggles to think simplistically’ when it comes to her cooking – explained: ‘What stands out the most is the close bond we had made already, as well as how supportive we all were to each other, despite coming from various backgrounds. Basically, it was like catching up with long lost friends.’

Dave, 30, developed a love for the art once he moved out of his family home, after years of depending on his mum’s food.

The armoured guard – who now lives with his girlfriend in their first home in Hampshire – splits his time between work, DIY projects and looking after his pets when he isn’t cooking up a storm in the kitchen.

Describing the competition as a ‘dream come true’, Dave said: ‘I’m very pleased. It felt like a long build up and that there were many hurdles to overcome first.

‘My strengths are the ability to learn from mistakes, take criticism and use it to improve, while my weaknesses would be feeling overwhelmed when mess builds up and struggling with some baking jargon…. And French words!’

Joining them will be Hermine, 39, an accountant who moved from Benin to the English capital in 2001 to pursue further education, digital manager Laura, 31, from Kent, who focuses on mastering ‘pretty and dainty’ creations, Rowan, 55, a music teacher from Worcestershire with an ‘ostentatious’ baking style, and London-based pharmacy dispenser Sura, 31, who is an expert at balancing fragrant and floral flavours.

Also in the Tent will be retirement living team leader Linda from East Sussex, who at 61 is this year’s oldest contestant, as well as the youngest in the line-up – accounting and finance student Peter, 20, from Edinburgh.

The line-up is completed by Northern Irish project manager Mark, 32, who began experimenting with baking during his time at university, and Makbul, 51, an accountant from Greater Manchester who first took on cooking as a means to support his mother.

GREAT BRITISH BAKE OFF 2020: WHO ARE THE CONTESTANTS? 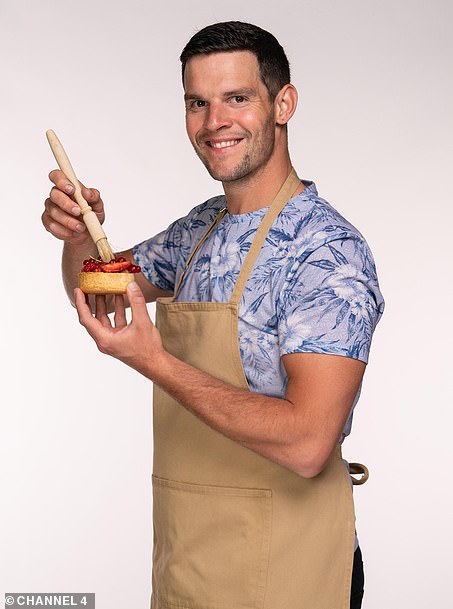 Amateur: Dave only started baking once he left his family home, after years of relying on his mother’s food 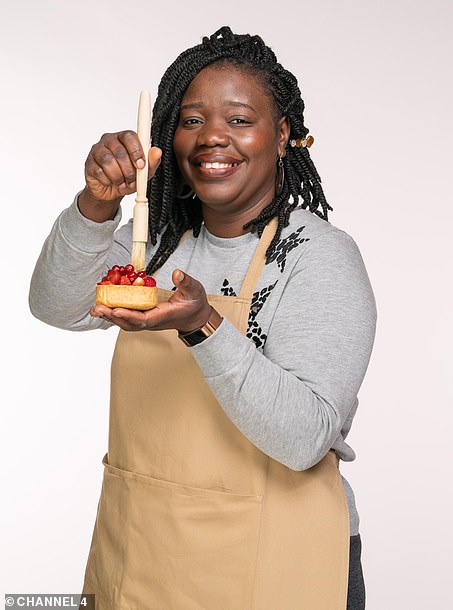 Impressive: The French influence in Benin-born Hermine has instilled in her a love of high-end pâtissérie

Why Bake Off? Dave first tried his hand at baking once he left home, after years of relying on his mother’s food. Now living with his girlfriend in Hampshire, his kitchen is filled with Bake Off-inspired appliances and his strengths lie in bread.

Why Bake Off? Born in Benin, Hermine moved to London in nearly 20 years ago to pursue further education. She made her first cake at the tender age of eight after helping her mother bake for large family events. The French influence in Benin has instilled in Hermine a love of high-end pâtissérie. 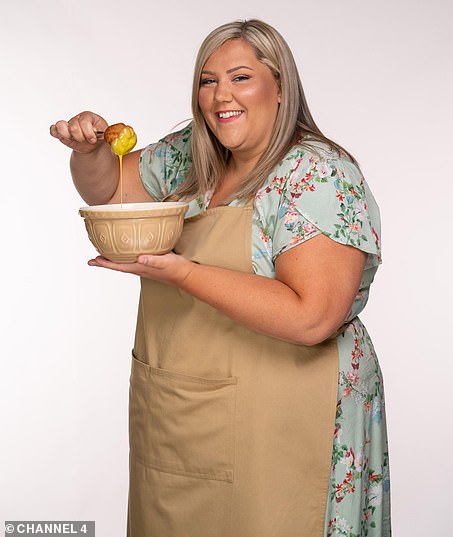 All in the details: When it comes to her masterpieces, Laura focuses on mastering ‘pretty and dainty’ decorations

Why Bake Off? Laura started baking as a child and returned to the art a few years ago. The Kent native credits working under pressure for being a strong hopeful in the competition. When it comes to her masterpieces, she focuses on mastering ‘pretty and dainty’ decorations. 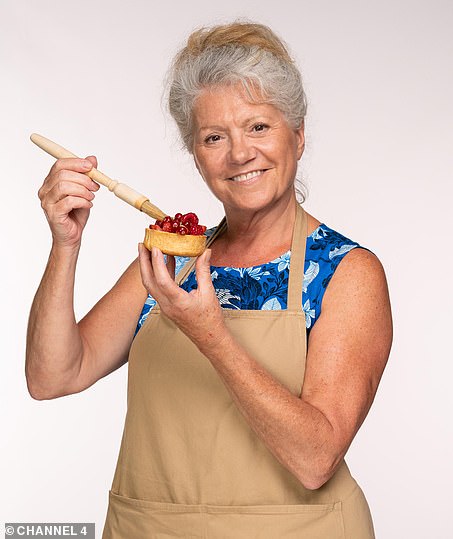 Natural: This year’s oldest contestant only uses homegrown produce in her cooking after growing up in the countryside

Why Bake Off? Linda picked up the hobby from a young age, after frequently visiting her aunt’s dairy farm. As a lover of the countryside, she believes her strengths lie in home-comfort cooking and only uses homegrown produce in her cooking. 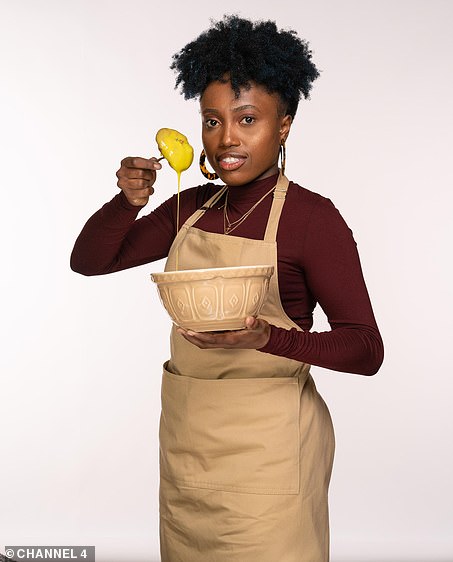 There’s no stopping her: Jamaican-born radiographer Loriea often works under pressure due to the nature of her job

Why Bake Off? The Durham-based chef infuses Caribbean flavours into her food, having lived in Jamaica for 15 years. She learnt how to bake from her grandmother and is used to working well under pressure. 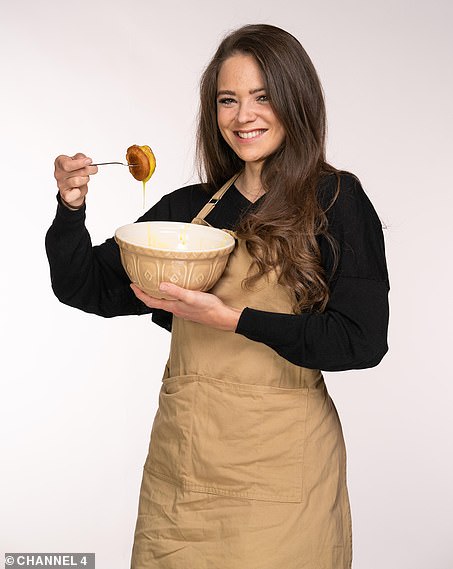 Passionate: Lottie has branded herself a ‘perpetually frustrated perfectionist’

Why Bake-off?  Lottie from West Sussex believes she’s inherited her love for baking from her Lancastrian great-grandmother and often swapped toys for cookery books as a child. 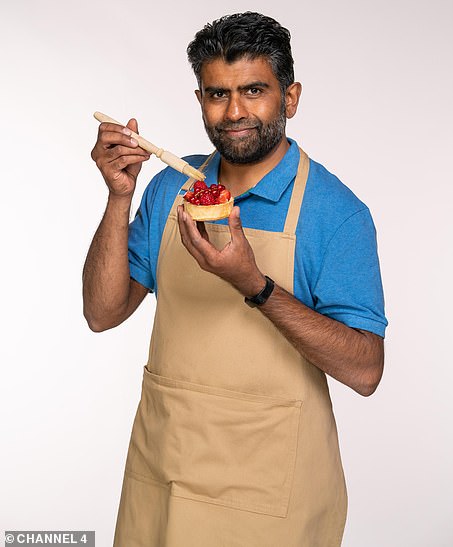 Hands-on: Pastries are Makbul’s speciality, which he usually creates for special occasions like Eid

Why Bake Off? Self-taught baker Makbul from Greater Manchester refined his baking skills through TV shows and famous chefs after cooking as a means to support his beloved mother. Pastries are his speciality, which he usually creates for special occasions like Eid. 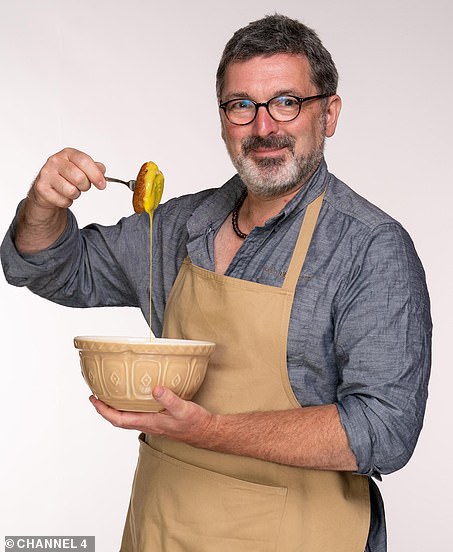 Healing power: Baking is therapeutic for amputee Marc, who lost his leg in a motorbike

Why Bake Off? Marc from Cornwall, joined the series in a bid to defy the odds after losing his leg in a motorbike accident in 2016. The bronze resin sculptor credits baking cakes and pastries for healing the mental strain of his injury, after spending his youth climbing mountains. 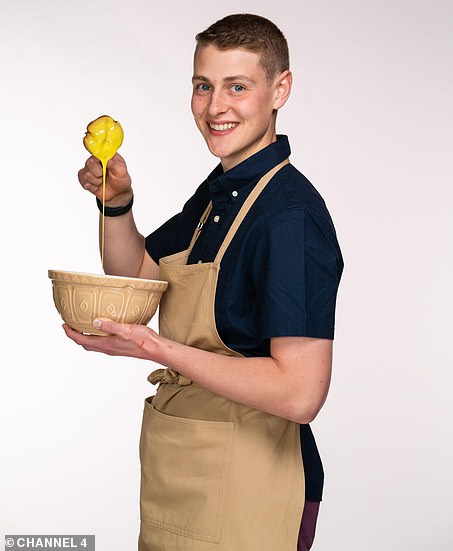 Fan: The competition’s youngest hopeful has loved the show since its inception in 2010

Why Bake Off? Peter started baking when he was 12 and has watched the series since its inception in 2010. Born in Edinburgh, the student ensures he incorporates his cultural background into his cooking and is the competition’s youngest hopeful. 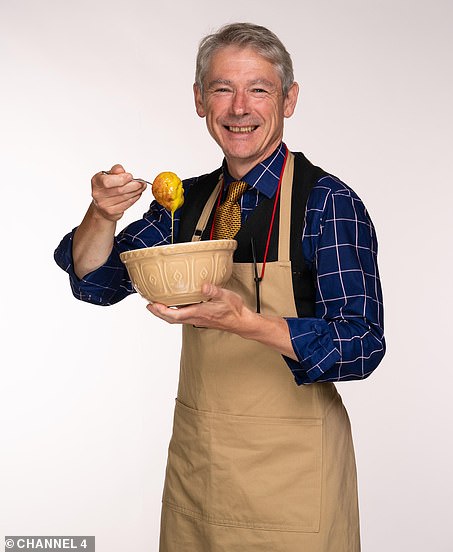 Why Bake Off? Rowan from Worcestershire is completely self-taught and specialises in French pâtissérie. The teacher also enjoys updating Georgian-inspired recipes with his own take on the 18th-century and enjoys decorating his masterpieces with flowers from his garden. 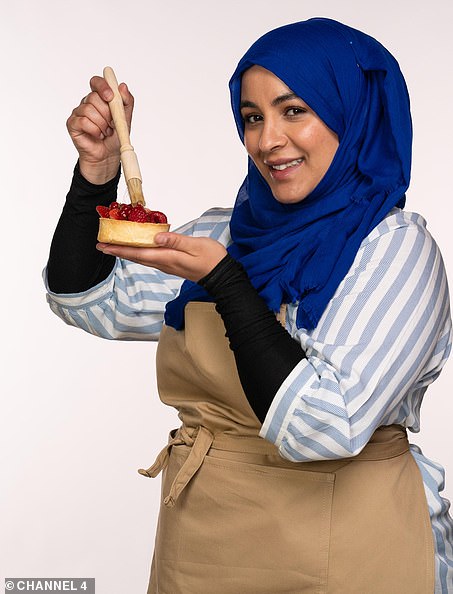 Why Bake Off? Sura from London pays homage to her Turkish, Iraqi, Iranian, Syrian and Indian heritage by experimenting with a wide range of seasoning in her cooking. An improviser by nature, she particularly enjoys balancing fragrant and floral flavours. 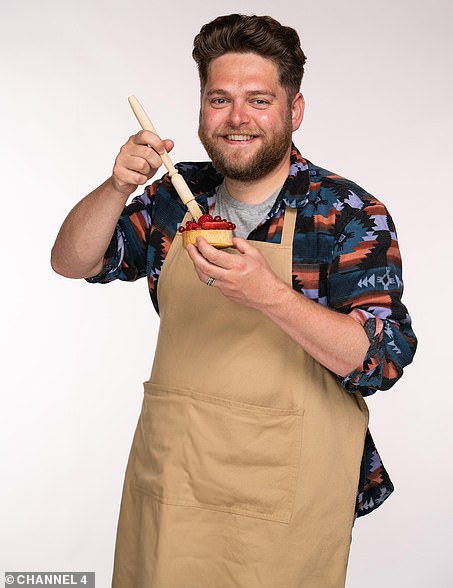 Cooking up a storm: Mark began experimenting with baking during his time at university

Why Bake Off? Northern Irish contestant Mark began experimenting with baking during his time at university. As a project manager for public health research programmes, he tends to experiment with flavours of Africa and Asia after visiting the continents for work.

Filming for the upcoming season kicked off in late July in the Essex countryside, just a stone’s throw from celebrity chef Paul’s £1 million Grade II listed farmhouse in Kent.

The popular show had been scheduled to go into production back in April, before the pandemic, and subsequent lockdown, scuppered all plans.

However, Sky Studios CEO Gary Davey brought all hopes for the show’s return back to life in July, when he revealed that filming is ‘going very well’.

It was also reported that the shows judges and presenters went into quarantine in the run-up to filming, to allow for close interaction on the set. 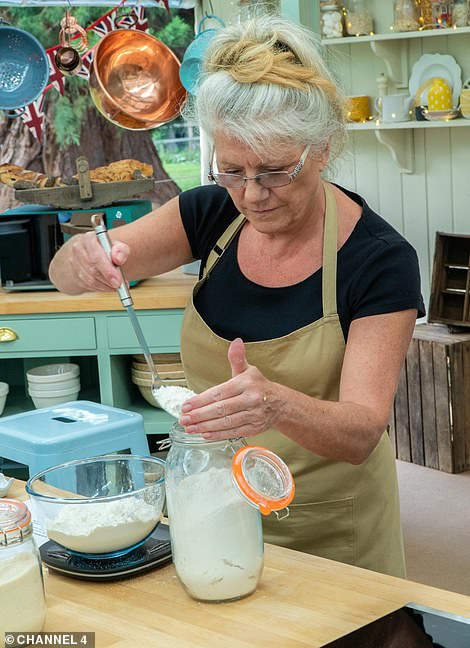 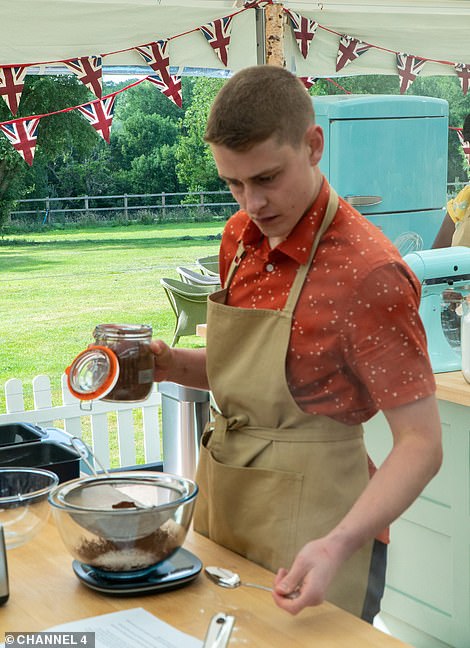 Wide range: (L-R) At 61, retirement living team leader Linda from East Sussex is this year’s oldest contestant, while the youngest in the group is accounting and finance student Peter, 20, from Edinburgh

Despite being considered a high-risk candidate for coronavirus at 80, Prue decided to make a comeback to the much-loved series.

TV sources previously claimed producers banned older contestants who are considered vulnerable to the virus. An insider told The Sun: ‘There’s a real sense of urgency to get the next series of Bake Off in the can, considering it’s one of Channel 4’s biggest draws.

‘That means the nation’s baking grans and grandads have been deemed too high risk. Bake Off’s wizened contestants are often the heart of the show.

‘Val, who would ‘listen’ to cakes to work out if they were done, and rapping septuagenarian Flo became favourites.’

Kelly Webb-Lamb, deputy director of programmes and head of popular factual for Channel 4, recently admitted it was an ‘enormous’ feat getting the show back on air. 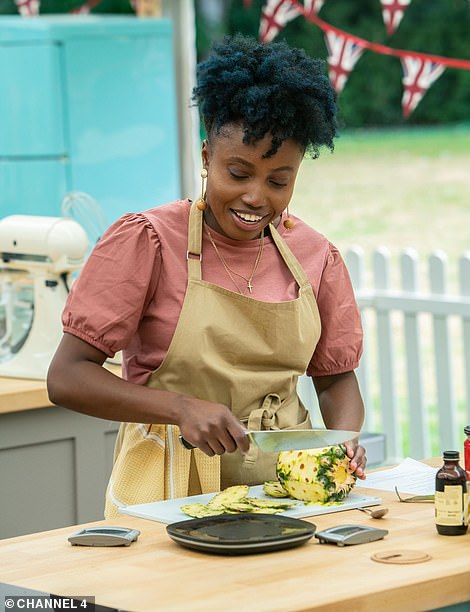 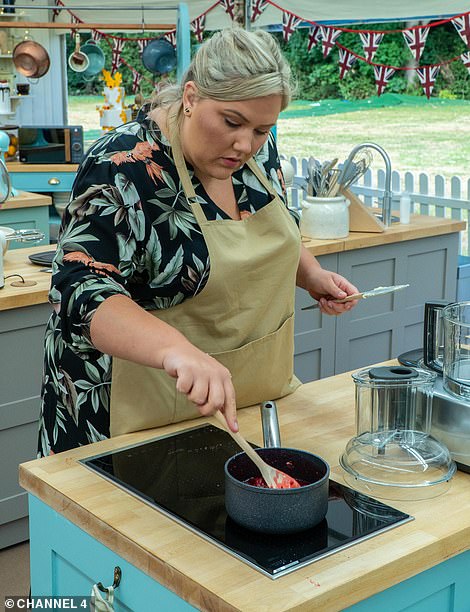 Passionate: (L-R) Loriea, 27, from Durham started baking 10 years earlier with help from her grandmother, and digital manager Laura, 31, from Kent, focuses on mastering ‘pretty and dainty’ decorations with her masterpieces

The TV executive credited stringent health and safety measures, testing and quarantine regimes for the return of the baking hit.

Media personality Paul, 54, reportedly wants to continue using his trademark handshake in the upcoming season, despite fears of spreading the virus.

The food expert’s handshake is widely regarded as the golden ticket for bakers who aim to meet his high expectations or win Star Baker of the week.

The first time fans witnessed his congratulatory move was in series three of the former BBC show. The program was relaunched on Channel 4 in 2017 and saw him dish out another seven handshakes in just one run.

Channel 4 has clarified they will follow strict safety protocol so that all parties are free to handshake to their heart’s content.

The new series of The Great British Bake Off will begin on Channel 4 on September 22 at 8pm. 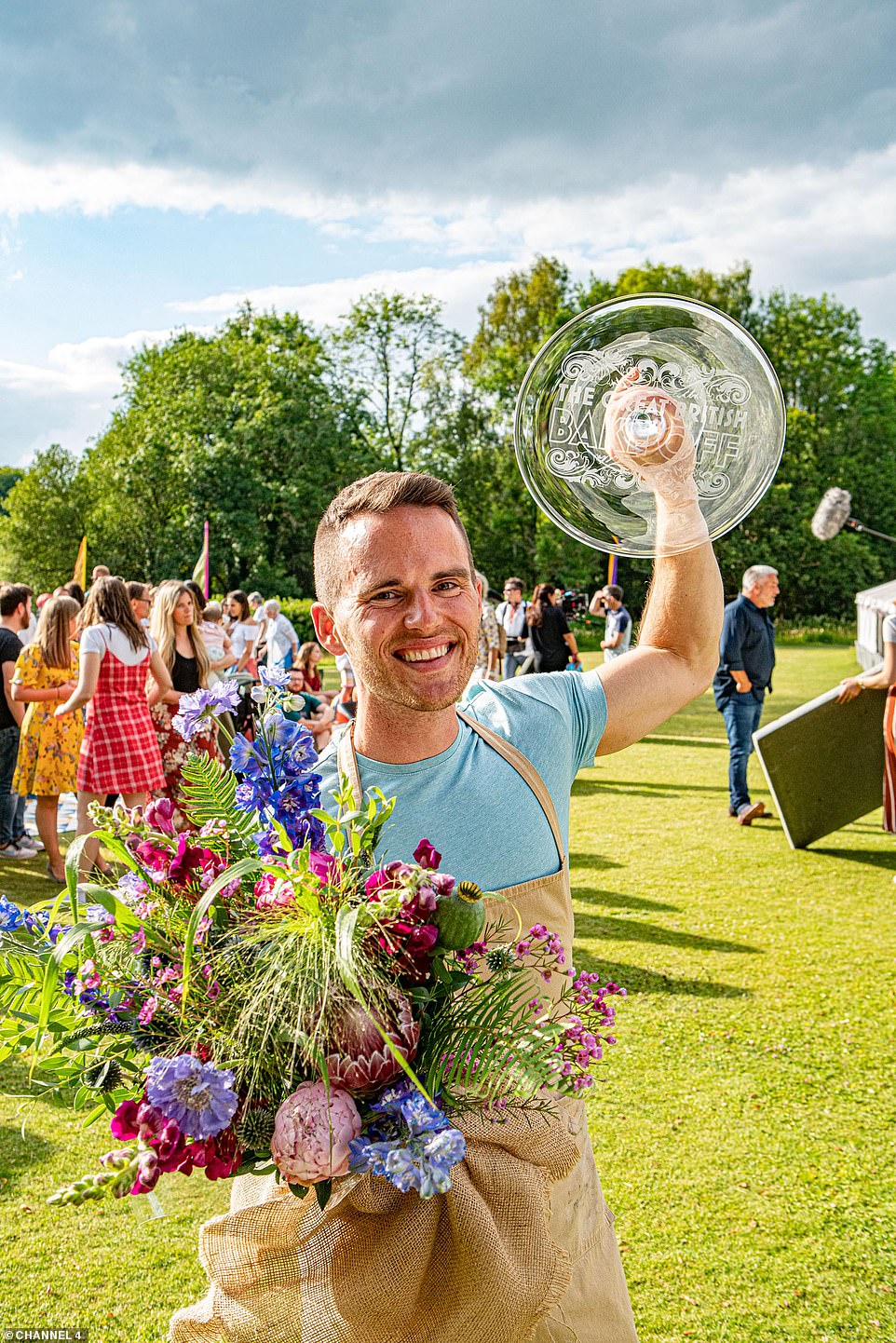 Reigning: One of 12 hopefuls will take home the desirable title of Bake Off champion, won last year by David Atherton (pictured)