Ministers have given green light for grouse shooting to be included on a list of sports that are exempt from coronavirus restrictions.

The new ‘rule of six’, which came into force yesterday, bans gatherings of seven or more people in England.

But government guidelines provide an exemption for shooting – including hunting and paintball that requires a shotgun or firearms certificate licence – as an organised sport that can be done in groups. 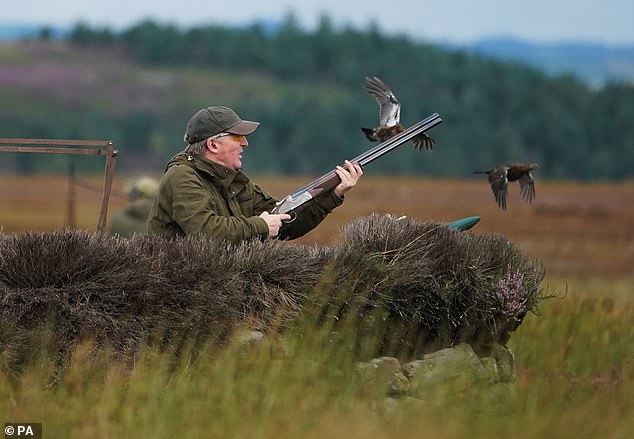 Other physical activities that can be done in with five or more others include team sports such as football, hockey and netball, as well as sailing, angling and polo.

The guidance states: ‘When participating in organised sport or licensed physical activity, you must not gather in groups of more than six before and after the activity.

‘You must also ensure you socially distance from people you do not live with (or have formed a support bubble with) wherever possible.

‘When playing sports informally with people you don’t live with, you must limit the size of your group to six. It is illegal to do so in a larger group and you may be fined.’

The government last night faced criticism from opponents of hunting, but received praise from those who had warned that a ban would impact the rural economy.

Tim Bonner, chief executive of the Countryside Alliance, said well-organised shooting and hunting meets posed ‘no serious risk’ to the spread of the disease, as both activities take place outdoors where organisers are able to implement social distancing.

Mr Bonner said applying the rule of six to country sports would have been a heavy blow to rural communities, which have already been hit hard by the loss of much of the tourist season.

‘Both hunting and shooting are intrinsic parts of the countryside, both economically and socially,’ he said.

‘Many areas of the countryside have suffered economically during the lockdown… In some areas, hunting and shooting are the main drivers of tourism in the winter months.’