A Gucci heiress has accused her stepfather of sexually abusing her for 16 years and blamed her mother and grandmother for allegedly covering up the abuse.

Alexandra Zarini, the granddaughter of late fashion supremo Aldo Gucci, claims that her mother’s ex-husband Joseph Ruffalo would climb naked into her bed and fondle her when she was a child.

In a lawsuit filed in California, Zarini, 35, alleges that her British-born mother Patricia Gucci and grandmother Bruna Palombo knew of the abuse and threatened her in order to keep it quiet.

She also released a video statement via the Alexandra Gucci Children’s Foundation, saying she believed it was her duty to ‘expose the misconceptions’ surrounding child sexual abuse. 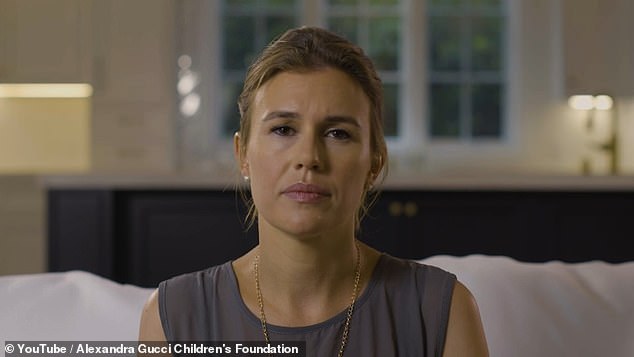 Zarini, the granddaughter of late fashion supremo Aldo Gucci, claims that her mother’s ex-husband Joseph Ruffalo (pictured above) would climb naked into her bed and fondle her when she was a child 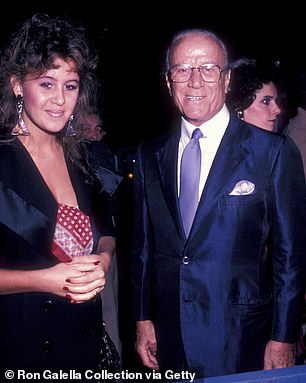 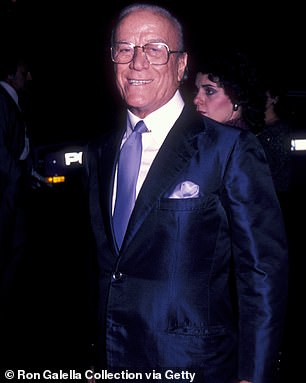 Gucci heiress Alexandra Zarini has accused her stepfather of sexually abusing her for 16 years and blamed her mother and grandmother for allegedly covering up the abuse. Aldo Gucci and daughter Patricia Gucci pictured in 1982, left, and Aldo Gucci, right

Ruffalo denies the allegations, while Patricia Gucci says she only learned of the alleged abuse in 2007 – leading her to divorce Ruffalo.

Patricia Gucci was born in London on March 1, 1963 and is the only child of Aldo Gucci and Bruna Palombo. She was educated in England, Italy and Switzerland.

The lawsuit filed by Zarini in Los Angeles alleges that the abuse started before her mother married Joseph Ruffalo, her second husband, when she was just six years old.

She claims that she would find Ruffalo with his hand on her genitals when she woke up after climbing into her mother’s bed when she had nightmares.

Zarini also alleges that Ruffalo would take off his bathrobe and climb naked into her bed before ‘reaching underneath her clothes’ to fondle her. 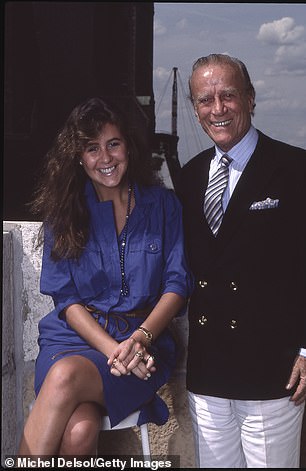 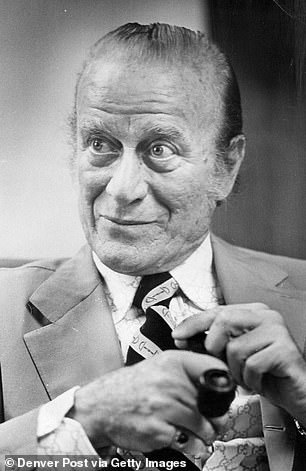 Court documents state that Ruffalo is a music manager who has worked with household names including Prince and Earth, Wind & Fire.

According to the court documents, when Zarini was around 16 years old, her grandmother asked her if her stepfather was molesting her.

When she said that he was, her grandmother instructed her to keep it ‘secret and not tell anyone about the assaults.’

The alleged abuse continued when Zarini was a teenager and attending boarding school in the UK, the lawsuit claims, with an old school friend claiming that Zarini had confided in her at the time.

After she finished school, Zarini moved back to California and lived with Ruffalo.

Ruffalo continued to sexually assault Ms. Zarini and ‘encouraged her to use drugs’, the lawsuit alleges. 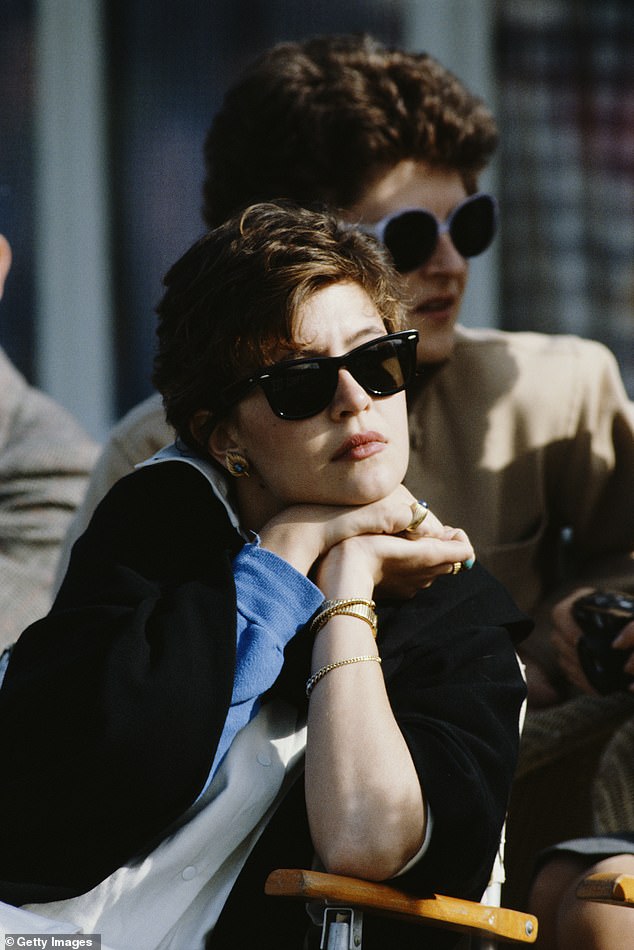 The New York Times reported that Patricia, Zarini’s mother, and her grandmother allegedly knew about the abuse for years and Patricia had allowed Ruffalo to videotape Zarini while taking a bath.

Speaking to the publication, Zarini said that her mother and grandmother had threatened her with disinheritance if she ever spoke out, and when she first broached the subject in her 20s, her mother allegedly advised her against it as it would bring ‘shame’ and ‘scandal’ to the family and ‘no one would believe her’.

‘I don’t care. I just want to stop this … I just don’t want this to happen to anyone, like my child or any child,’ Zarini told the New York Times.

The Gucci family: A fashion dynasty

Aldo Gucci was born in 1905 to Aida and Guccio Gucci – the company’s founder.

He was the visionary responsible for developing Gucci beyond its Florentine roots and turning the company into a global luxury brand, opening its first store in Rome and then launching in New York in the 1950s.

His pioneering spirit led to a string of stores across the US and beyond, establishing Gucci and the Made in Italy brand like no other before him.

He was married to Olwen Price when he embarked on an extra-marital affair with Bruna Palombo.

Patricia Gucci was born in London on March 1, 1963 and is the only child of Aldo Gucci and Bruna Palombo.

She was educated in England, Italy and Switzerland before moving to New York to study acting, despite her father’s wish that she dedicate herself to the family business.

In 1982 after a year of study her father’s wish prevailed and she was appointed to the board of Gucci and roving Ambassador in the US and Asia until the sale to Investcorp in 1987.

She has three daughters – Alexandra, Victoria and Isabella.

She added that since coming out of Sierra Tucson rehabilitation center in Tucson, she has been financially independent from her family and gave birth to her first child four years ago.

The Beverly Hills Police Department confirmed that Zarini had filed a report about the alleged abuse she had suffered at the hands of Ruffalo last year, and that authorities still had a file open.

Zarini believes no one in her family would speak to her again if she went through with the lawsuit, but she was prompted to move forward with it after learning that Ruffalo was volunteering at a children’s hospital in Los Angeles.

Ruffalo’s lawyer has reportedly denied claims his client had volunteered at a children’s hospital.

In a video statement released by the Alexandra Gucci Children’s Foundation, Zarini said she decided to speak out because ‘there needs to be accountability for those people who look away and who don’t stop child sex abuse from happening.’

In a emailed statement to The New York Times, Patricia Gucci said she immediately began divorce proceedings after learning of the alleged abuse her daughter had suffered.

‘I am deeply sorry for the pain Joseph Ruffalo caused Alexandra. What he did to her is inexcusable and I was devastated when she disclosed everything to me at our family doctor’s office in London in September 2007.

‘I immediately initiated divorce proceedings against Mr. Ruffalo and set about healing my family through counseling.

‘I am equally devastated by the allegations against me and her grandmother, which are completely false.’

Ruffalo’s lawyer, Richard P. Crane Jr., said his client had not read the complaint but ‘what he has been informed of, he vehemently and categorically denies.’

Alexandra Zarini is one of three daughters of Patricia Gucci, the only child of Aldo Gucci and Bruna Palombo.

Aldo Gucci, who died in 1990, was the son of company founder Guccio Gucci and turned his father’s leather goods firm into a global fashion giant.

He was already married and had three children by the time he met Patricia’s mother, Bruna Palombo.

He opened the company’s first American store in New York City in 1953 and brought his sons Giorgio, Paolo and Roberto and his nephew Maurizio into the firm’s top ranks.

In 1986, he pleaded guilty to evading $7million in taxes and was later implicated in a corporate tax evasion scheme.

The family no longer has any ownership of the firm after Maurizio Gucci sold his remaining shares in 1993.