Two high school football players were suspended after carrying Thin Blue Line and Thin Red Line flags onto the field to honor first responders who died on 9/11, after being told they were forbidden to do so.

Brady Williams and Jarad Bentley, students at Little Miami High School in Ohio, were suspended from the team Monday, after the pre-game incident on Friday, September 11.

The two students had asked permission to display the flags before the game, and were warned not to do so. But they displayed the flags anyway.

School superintendent Gregory Power said he had concerns that some see the flags as symbols of a political point of view. 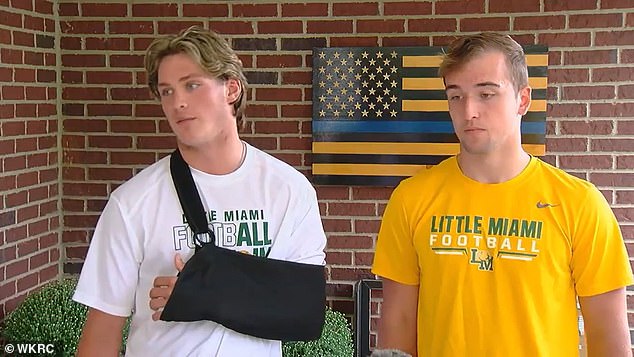 Brady Williams (left) and Jarad Bentley (right), students at Little Miami High School in Ohio, were later reinstated to the team after the pre-game incident on Friday, September 11 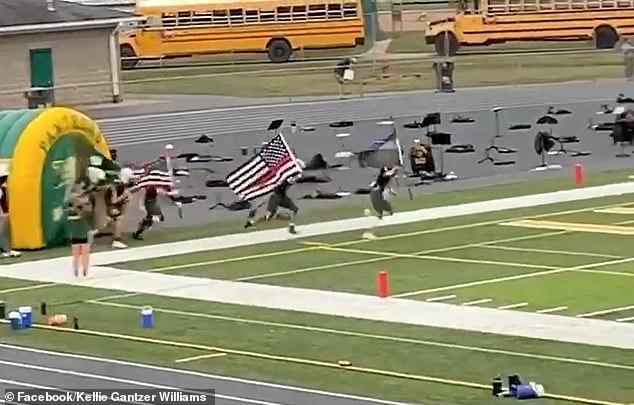 In an interview with WKRC-TV, Williams denied that the flags were meant as a political statement, saying: ‘Not at all. I was just doing it to honor the people that lost their lives 19 years ago.’

The boys were later reinstated to the team by the school board after public outrage.

Williams, whose father is a police officer, said he wanted to honor all the cops who lost their lives trying to save others during the terror attacks on September 11, 2001.

‘I was all for it,’ Bentley told the station. ‘Because my dad is a firefighter, and if it had been him killed on 9/11, I would have wanted someone to do it for him.’

Of the 2,977 victims killed in the September 11 attacks, 412 were emergency workers in New York City who responded to the World Trade Center.

But Superintendent Power said he didn’t want to set a precedent for allowing any flags at games aside from the school flag and the American flag. 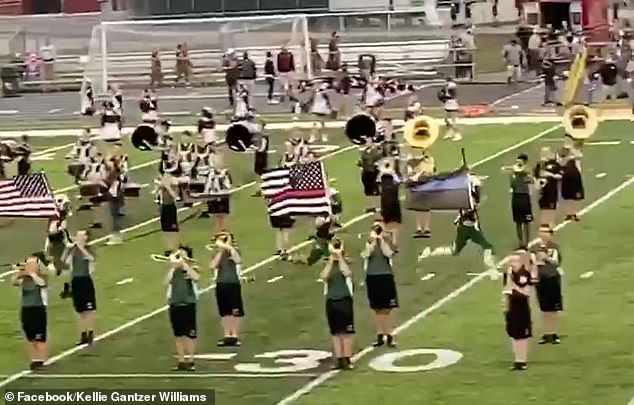 The two students had asked permission to display the flags before the game, and were warned not to do so

‘We did not want to place ourselves in a circumstance where another family might want a different flag to come out of the tunnel, one that maybe many other families may not agree with from a political perspective,’ Power said.

The two students were informed of an indefinite suspension from the team on Monday, but on Tuesday the school board overturned the suspension and allowed them to return to active status.

In a message from the Little Miami Board of Education, President Bobbie Grice said the superintendent and the administrators had completed their investigation. 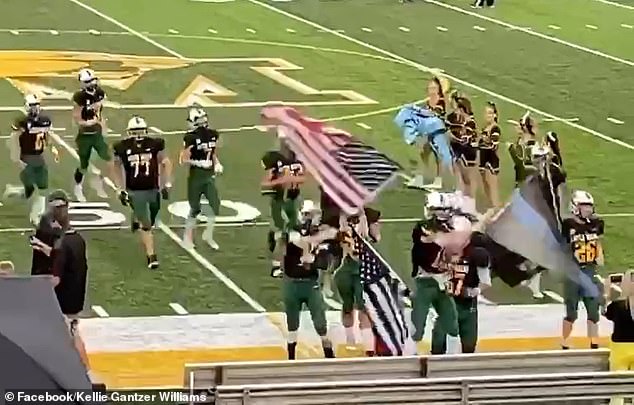 ‘The results show that there were no political motivations behind this display of support for first responders on 9/11, but there were stances of insubordination.’

Grice said that the district was disappointed that the incident had overshadowed the planned commemorations for the game.

‘The district enjoys an outstanding relationship with our local police and fire agencies. In fact, the Patriot Night program Friday night featured a script recognizing first responders, information about what happened on 9/11, a poem celebrating those who sacrificed their lives and a remembrance ceremony with a moment of silence,’ he said.

‘We regret that such a moment of solemnity was somehow lost in this event.’