They’re no strangers to talking about medical issues on This Morning.

And Holly Willoughby and Phillip Schofield were tested to their limits as they tried to hold back the giggles while speaking about vaginas on the show on Wednesday.

Speaking with Dr. Philippa Kaye, the TV hosts impressively managed to stay straight-faced however a few laughs and smirks escaped in the lead-up to the segment. 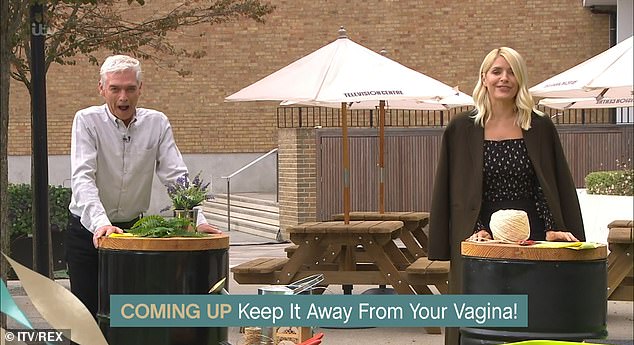 Got the giggles? Holly Willoughby and Phillip Schofield couldn’t contain their amusement as they spoke about vaginas and had a slight giggle during This Morning on Wednesday

Ahead of the chat Holly and Phillip were shown how to compost but had to giggle when telling viewers the next section would be called ‘what to keep away from your vagina’.

However things took a more serious tone in the chat with Dr Philippa where the hosts were told about a new product from an Australian beauty brand called a vulva mask.

Unsure what to do with the product or how it was supposed to work, Phil held up the item and declared it to look like a pair of ‘lacy pants’.

Dr Philippa then explained that ‘you apply it like a sheet mask to hydrate, soothe, and protect the skin while smoothing out wrinkles on the vulva’. 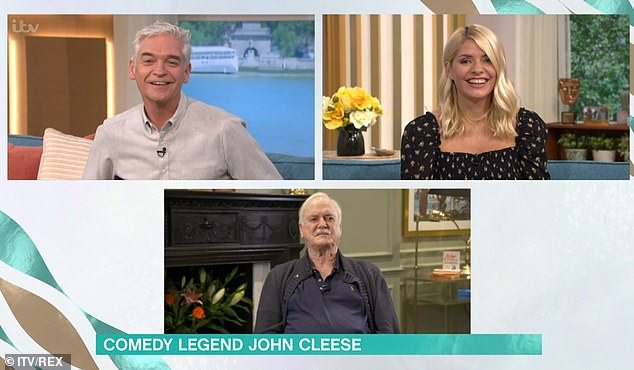 Joker! The hosts managed to hold it together while talking with Dr Philippa but had to let out a giggle after John Cleese joked if the vaginal mask was something to do with coronavirus

Make like Holly in a smocked top by Maje

Another day of Holly Willoughby hosting This Morning can only mean one thing. Another outfit we want to copy!

She’s been loving square neck smocked bodice dresses recently, but this time she’s gone for a smarter, more autumnal take on the trend. Check out her chic top and black trouser combo!

The kick flares are by 3.1 Phillip Lim, but it’s the Maje top we’re keen to add to our shopping basket ASAP. It’s going to look great with everything from black trousers and heels for heading back to the office to blue jeans and trainers at the weekends. Click (right) to snap it up from Selfridges.

Can’t see your size? Our edit below is the place to go for lookalikes from Reformation, Dorothy Perkins, SHEIN and SilkFred.

Clearly puzzled by the product, Holly said: ‘I am just trying to work out how it goes… Is it like a pair of knickers you just get into?

Dr Philippa then shared her opinion, saying: ‘I think beauty industry and pseudo science feeds into periods being dirty, and this seems to feed into that. They’ve used a little science to try and trick us to need it.’

Holly added that ‘the body is really clever, it doesn’t really need this’, with Dr Philippa adding that the ‘vagina is self cleaning, and if someones commenting on the appearance of your vulva you really need someone else to look at it.’

Dr Philippa went on to tell them about other products, such as a brush, which she doesn’t believe is needed as a ‘vagina is supposed to be moist’. 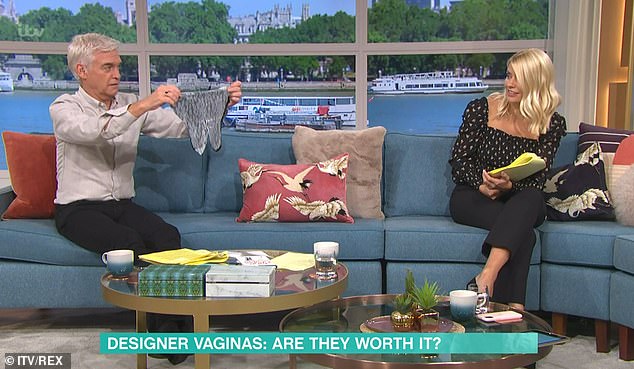 What is that? Phillip was unsure what to do with the vagina mask product on the show 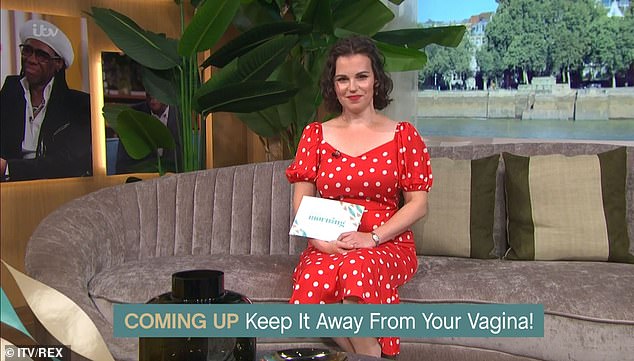 Explaining: Dr Philippa Kaye chatted about vagina health and the different products on the market 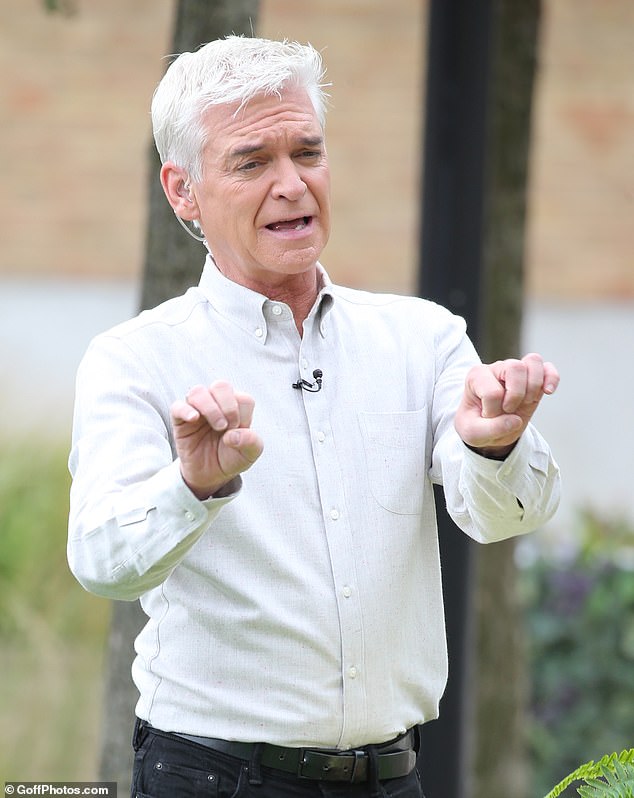 What’s going on? Phillip pulled a selection of funny faces during the show

However her comments about vaginal steaming left Phillip pulling a funny face and Holly trying her best to keep things professional.

Dr Philippa said: ‘Another popular one is vaginal steaming, Gwyneth Paltrow is keen on this one on her site Goop. It’s where you sit over pot of boiling water and herbs..

‘There are claims that it can clean out womb with steam… but we wouldn’t want this to happen. We want balance of bacteria to stay as it is.

Phillip wrapped up the section saying that the ‘answer to what to do to vagina is basically nothing’. 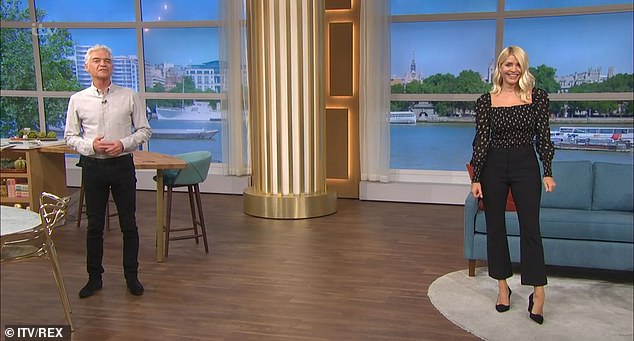 Professionals: The hosts only let out a few cheeky smiles in the lead-up to the medical chat 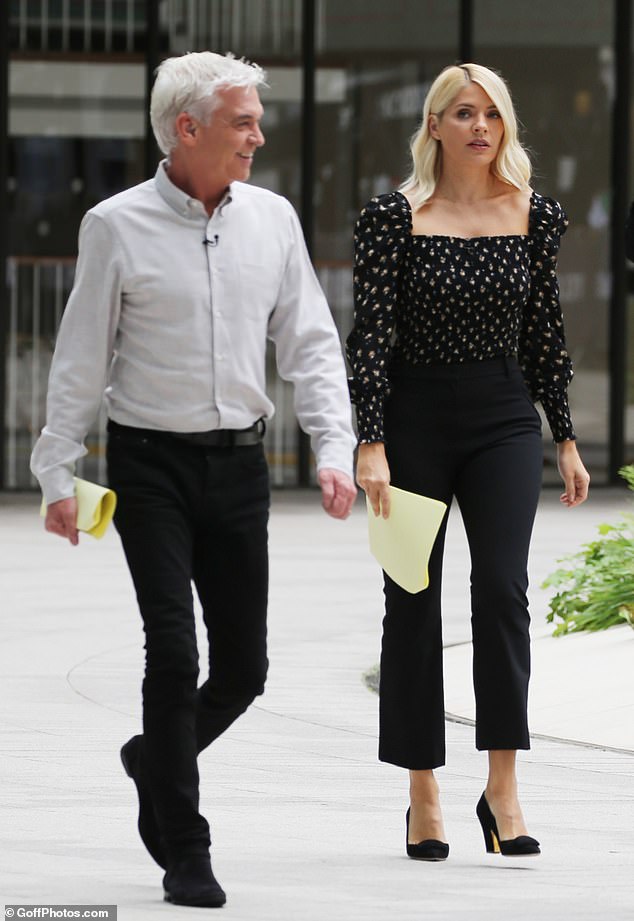 Smart: The hosts put on a smart display during the show, with Phil opting for a grey shirt and Holly stunning in a floral shirt 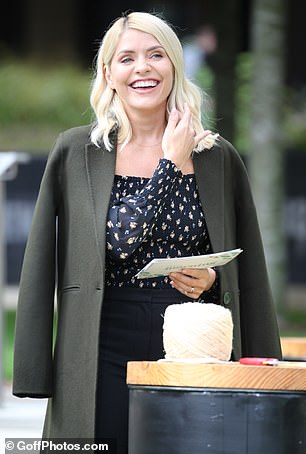 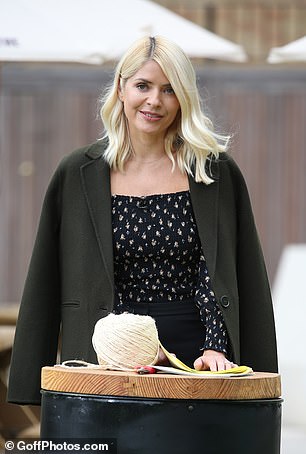 Glam: Holly wore her blonde locks down and curled as she posed with a winter coat over her shoulders for the show 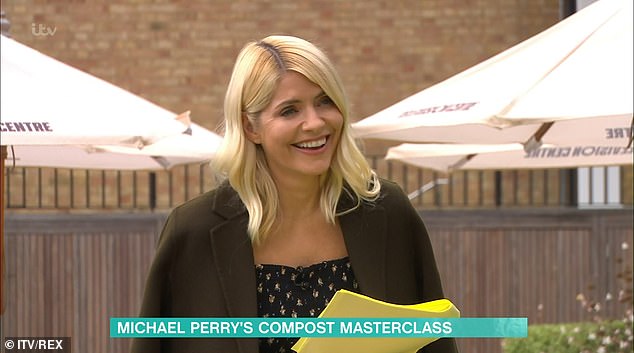 Entertained: Holly was also left laughing as she was shown how to compost with Michael Perry

The hosts were also left smiling when comedian John Cleese joked with them, asking if the mask was anything to do with coronavirus.

This Morning fans were also impressed that Holly and Phil managed to keep it together during the show, praising them on Twitter.

While others also praised them for chatting about the important topic on the show.

One wrote: ‘To lighten things, how are @schofe and @hollywills not having one of their giggling fits talking about vaginas?’

Impressed: This Morning fans praised the show for including the segment and others said they were impressed with Holly and Phil trying to hold it together 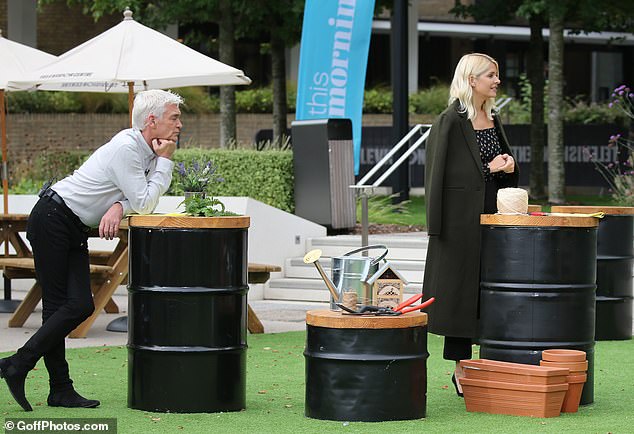 Concentrating: Phil appeared to be listening intently as they pair filmed a segment outside