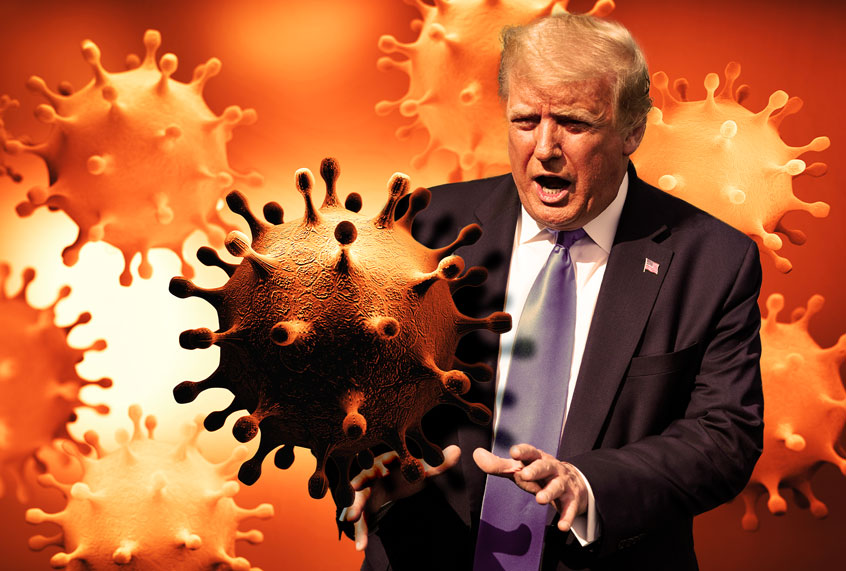 President Donald Trump privately acknowledged the “deadly” threat posed by the new coronavirus even as he downplayed the dangers of the pandemic to the American public in a series of interviews recorded earlier this year with the veteran journalist Bob Woodward.

Trump made the remarks across a series of 18 taped interviews with Woodward, whose reporting on the Watergate scandal hastened the resignation of former President Richard Nixon. Woodward interviewed Trump for “Rage,” his second book on the current sitting president, which is set to be published on Sept. 15.

In a recording of a Feb. 7 interview obtained by CNN, Trump acknowledged he knew that the coronavirus was airborne, highly contagious and “more deadly than even your strenuous flus.”

“This is more deadly. This is 5 per— you know, this is 5% versus 1% and less than 1%. You know? So this is deadly stuff,” the president, who also called those facts “pretty amazing,” said on the recordings.

That interview took place 19 days before the Centers for Disease Control and Prevention confirmed the first case of community spread in the U.S. Nearly 200,000 Americans have now died from COVID-19.

Between Feb. 10 and March 2, Trump held five campaign rallies, each drawing thousands of people together. At a Feb. 28 rally, Trump put COVID-19 on par with the flu, telling supporters that warnings to the contrary were a Democratic “hoax.”

“This is their new hoax,” Trump said, adding that Democratic criticism of the administration’s response to the disease was the party’s “single talking point.”

“Thirty-five thousand on average each year die from the flu. That’s a lot of people,” the president said. “So far, we have lost nobody to coronavirus,” he added as he blamed the increasingly urgent alarms around the world on the media being in a “hysteria mode.”

COVID-19 has now proved more than five times as deadly as that average number.

In a March 19 tape, two days after Trump and White House task force coordinator Dr. Deborah Birx told reporters that they had been evaluating models which projected as many as 2.2 million deaths, the president told Woodward that he was intentionally playing down the gravity of the situation.

“I wanted to always play it down,” Trump, who had just declared a national emergency, said. “I still like playing it down, because I don’t want to create a panic.”

White House press secretary Kayleigh McEnany falsely claimed to reporters Wednesday that “the president never downplayed the virus,” even though Trump’s own words were recorded.

After reports of the tapes first broke, a source close to the Trump campaign told CNN that many staffers were shocked by the president’s comments about the early warning signs of the pandemic, the outlet reported. Trump concealed that information from his own team, the source source claimed.

McEnany was a campaign official at the time of the remarks.

Carl Bernstein, Woodward’s partner in breakthrough reporting on the Nixon administration, told CNN that he considered Trump’s behavior to be “homicidal negligence.”

Dr. Anthony Fauci, the top federal infectious disease expert, is quoted in Woodward’s book as telling associates that Trump was a “rudderless” leader whose “attention span is like a minus number.”

“His sole purpose is to get reelected,” Fauci said, according to the book.

In response to the reports that Trump “willingly lied,” Democratic opponent Joe Biden said Wednesday that the president’s handling of the pandemic was “a life-and-death betrayal of the American people.”

“He had the information,” Biden said.​​​​​ “He knew how dangerous it was, and while this deadly disease ripped through our nation, he failed to do his job on purpose.”