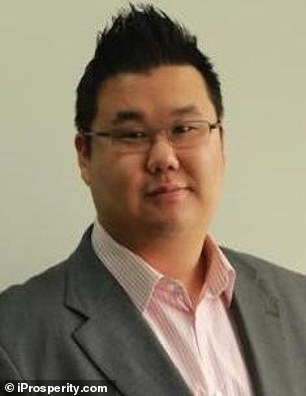 Michael Gu moved into Sydney’s tranquil lower north shore in an appropriately polite style, with his wife Cherry delivering a box of Lindt chocolates to their neighbours’ door.

With the chocolates was a card introducing the family’s ‘huge but friendly’ Samoyed dog Doughnut and providing a mobile phone number if the neighbours ever needed help.

Initially nothing about the couple seemed out of ordinary in quiet Superba Parade, Mosman, where the $10million Gu home stood above Balmoral Beach.

Mr Gu was barely even noticed until his garage got so full he began parking a white Lamborghini Urus and a dark Bentley Bentayga on the street.

Three years later Mr Gu, his wife and the cars are all gone, with the 32-year-old investor having disappeared owing $350million.

Mr Gu has since been dubbed ‘Australia’s new Christopher Skase’ after his iProsperity Group business collapsed and he fled the country for the United States.

While he is believed to have flown to Los Angeles via New Zealand, Mr Gu’s exact whereabouts are unknown.

This week the front entrance of Mr Gu’s home was vandalised on three surfaces with Mandarin characters in red paint demanding ‘pay the money back’.

When Daily Mail Australia visited on Friday the graffiti had been removed and the empty house was locked up securely.

Neighbours said they did not know when Mr Gu and his family had moved out and barely saw him when he was home. 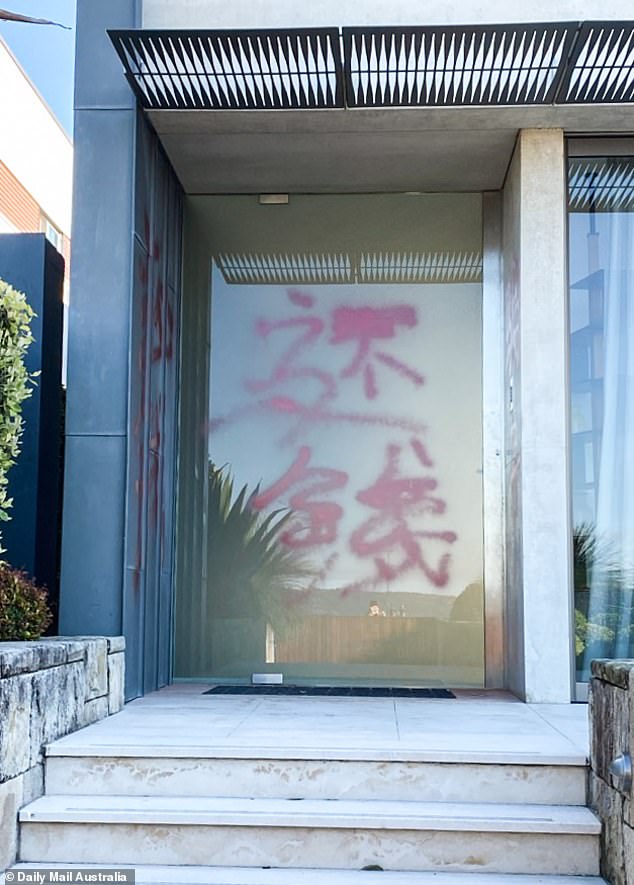 Michael Gu has fled Australia after his company collapsed owing creditors $350million. Three years ago Mr Gu and his wife moved into a $10million mansion at Mosman on Sydney’s lower north shore. This week someone wrote ‘pay the money back’ in Madarin on his front door 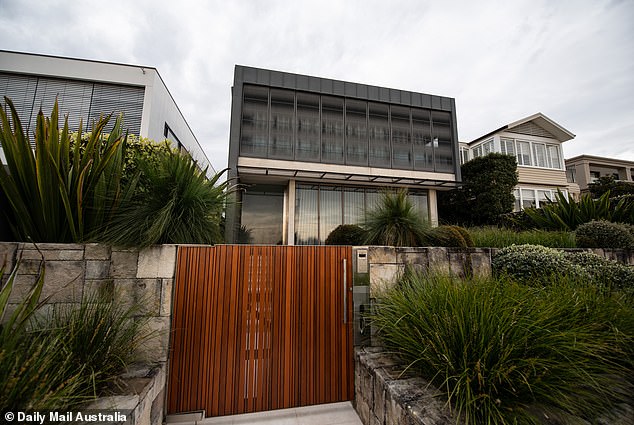 Mr Gu arrived in Superba Parade, Mosman, in an appropriately polite fashion, with his wife Cherry delivering a box of chocolates to their neighbours’ door. Mr Gu was barely noticed until he began parking a Lamborghini and Bentley on the street. His abandoned home is pictured 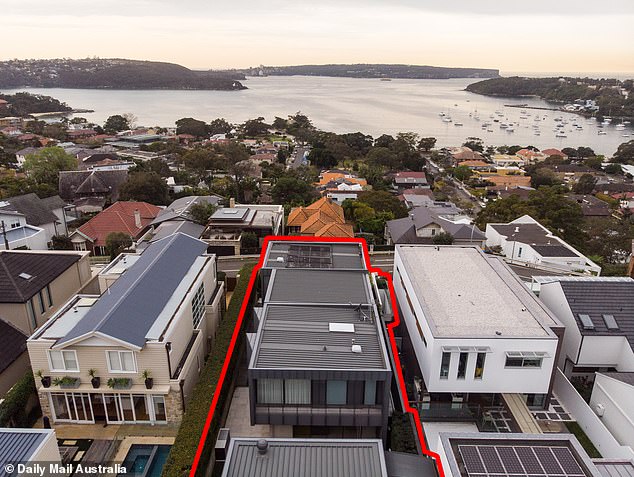 One said she had left a welcome note for the new residents when they bought their four-bedroom home in April 2017 – ‘just doing the neighbourly thing, you know’.

Mrs Gu responded some time later by dropping a card and box of Lindt chocolates in the neighbour’s letterbox.

‘Sorry for the later reply,’ the hand-written card from Mrs Gu began. ‘Me & Mike was just back from oversea.

‘Thank you for your lovely “Balmoral welcome card. We are currently very enjoy the views of the beach. 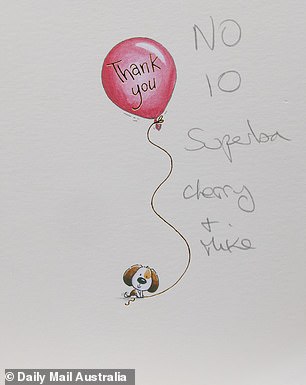 ‘My parents are also here with my 1 year old daughter, also my dog “Doughnut”. He is huge but friendly, you may saw him before. He’s Samoyed. Ha ha.’

Mrs Gu included her mobile phone number and wrote: ‘For anything you need me help, please let me know. Have a good day! Regards, Cherry (Fr 10 Superba).’

The neighbour said she ate the chocolates, kept the card and never heard from the Gu family again.

‘We never saw them or spoke to them,’ she said. ‘To be honest, they were away a lot. I couldn’t tell you what he looked like – or her.’

What the neighbour did notice was the Lamborghini and Bentley SUVs parked outside the Gu home, which even in an affluent suburb like Mosman stood out.

‘People used to stop and take photographs of themselves with the cars,’ she said. ‘We used to laugh. I don’t know what was in the garage because it was always closed.’ 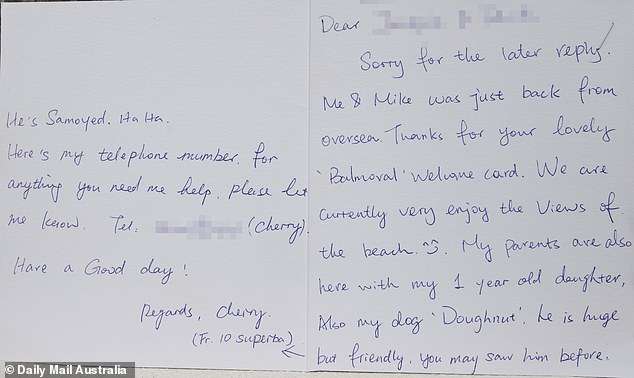 ‘Me & Mike was just back from oversea,’ Cherry Gu wrote to the couple’s neighbours. ‘Thanks for your lovely “Balmoral” welcome card.’ The neighbours had no more contact in three years 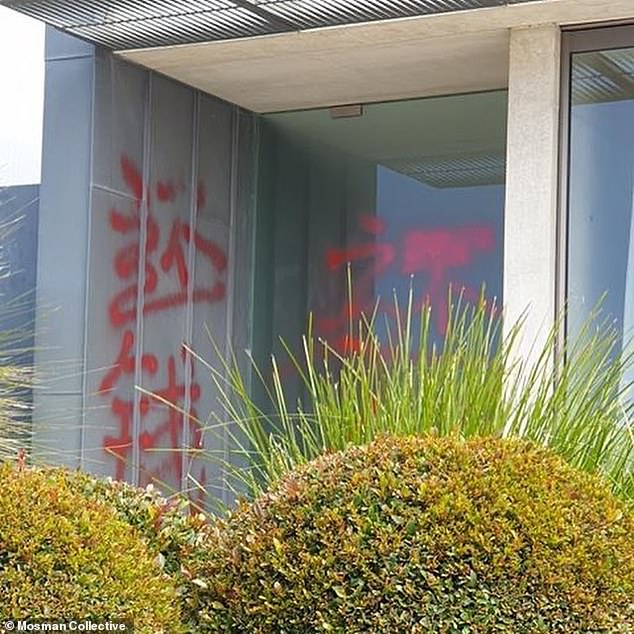 A certified translator said the graffiti was written in simplified Mandarin and literally meant ‘Pay money back’ but in the context could be read as ‘You pay the/my/our money back!’

Presumably rotated through the double garage were Gu’s other vehicles: a Rolls Royce Wraith, a Ferrari Spider and a second Lamborghini.

Another neighbour said she did not know when Mr Gu had moved out of the house.

‘They just seemed to be quiet, nice people,’ she said. ‘They didn’t really draw attention to themselves except for the cars.’

A third neighbour had not even noticed that Mr Gu and his wife were gone or seen the graffiti on his door.

‘Those Chinese people?’ she said. ‘I didn’t see them move out. The curtains were always drawn. You got the impression they were away a lot and terribly, terribly quiet.’ 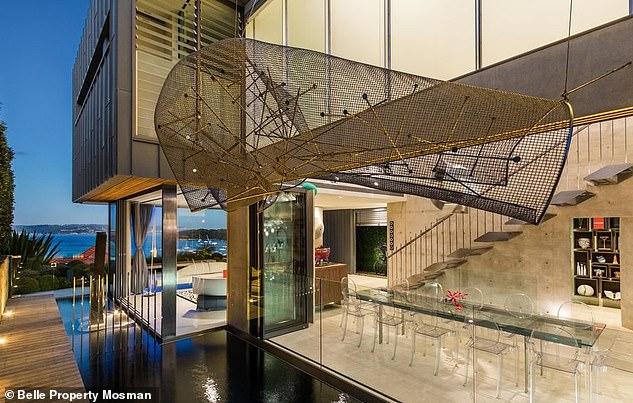 The $10million home (pictured) will likely be sold off in an attempt to recover some of the money owed by Gu’s companies, but it is mortgaged to Credit Suisse 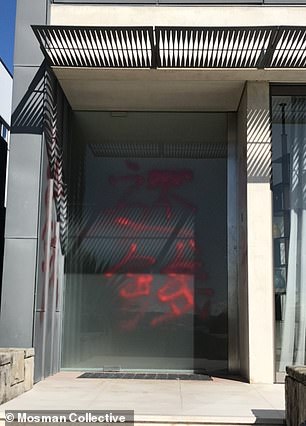 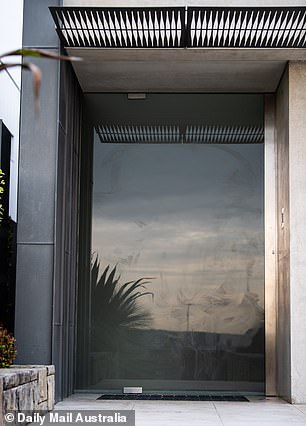 Michael Gu’s luxury Mosman home was painted with graffiti saying ‘pay back the money’ in Chinese (left) this week. Gu’s home had been cleaned of all graffiti by Friday morning (right)

A certified translator said the graffiti was written in simplified Mandarin and literally meant ‘Pay money back’ but in the context could be read as ‘You pay the/my/our money back!’

Mr Gu and his business associate Harry Huang appear to have fled Australia on July 26 after the Department of Home Affairs allowed them to travel.

That permission was granted despite fraud allegations having been levelled against the pair by their creditors. Neither has been charged with any crimes.

Mr Gu has been described as a ‘modern day Christopher Skase’ because he was granted permission to travel and quickly fell off the radar.

Skase was an Australian entrepreneur who became one of the country’s most wanted fugitives, after his business empire crashed and he fled to Majorca, Spain.

He was accused of exaggerating illnesses and died before he could ever be extradited to Australia. 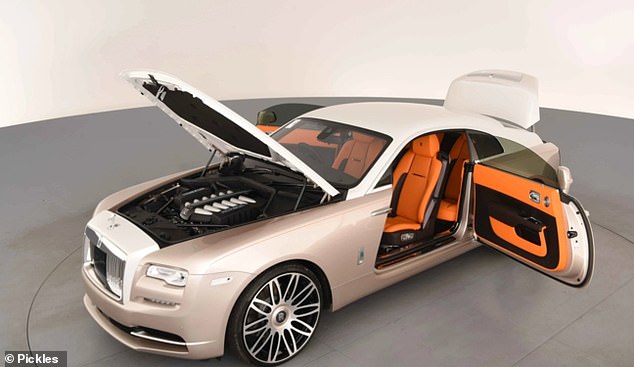 The most flashy of Gu’s cars was this white-gold Rolls Royce with bright orange leather trim and lambswool mats which was sold at auction last week for $502,000

Gu’s last known location was in Los Angeles, but authorities are not certain he is still there.

His gold Rolls Royce Wraith with its bright orange leather trim and lambswool mats was sold by liquidators at auction last week for $502,000.

That vehicle was one of the few physical items that could be recovered from the collapse of Gu’s business, which could cost investors up to $350million.

The $10million home will likely also be sold off in an attempt to recover some of the money, but it is mortgaged to Credit Suisse. 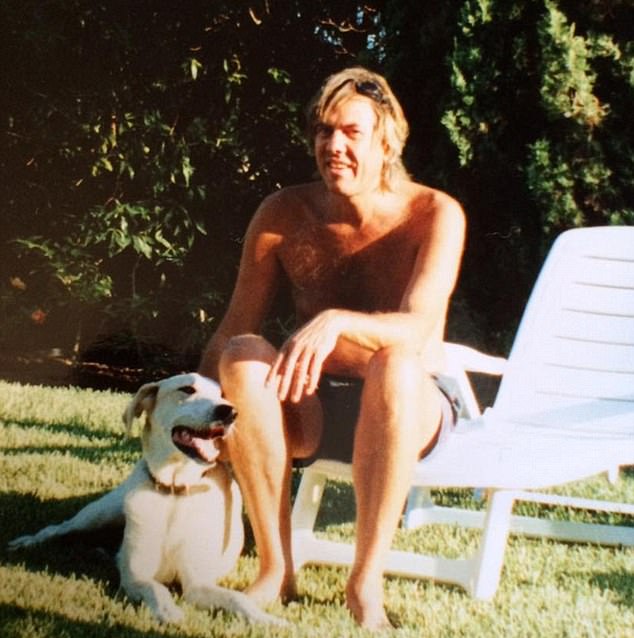 Mr Gu has been described as a ‘modern day Christopher Skase’. Failed entrepreneur Skase (pictured) fled Australia for Spain in 1991 while facing charges over his business activities

Mr Gu had been touted as an incredible success story, rising from a mobile phone salesman in western Sydney to a businessman who gained the trust of huge international investors.

‘People who would say ”look at the car Michael drives, where he lives, his office”,’ one person known to Mr Gu told the Australian Financial Review. ‘They believed he was a great success story.’

New South Wales Police are in the early stages of investigating Mr Gu over potential fraudulent activity, but by the time authorities put a stop on his passport, he’d already flown out of Australia.

Cor Cordis was appointed as administrators of 13 iProsperity companies in July.

‘Our urgent focus is on stabilising the iProsperity Group and commencing a full and thorough investigation into its affairs,’ Cor Cordis Partner and Voluntary Administrator Barry Wight said. 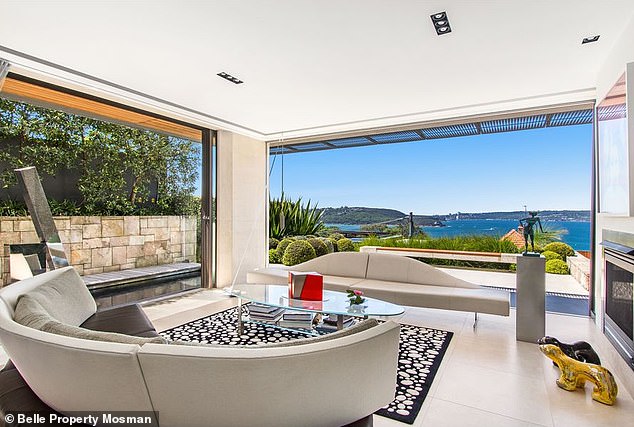 Liquidators are still establishing how they can best retrieve as much of the money owing as possible.

A report by KPMG said the ‘potential misuse of investor funds’ and ‘potential improper conduct’ likely led to the collapse of one iProsperity company, Capital Management Pty Ltd.

Capital Management, which had debts of $60.5 million, was just one of the iProsperity group’s 64 operations, the AFR reported.

Christopher Skase began his working life as a stockbroker before becoming a financial journalist and eventually Australia’s most notorious fugitive.

In 1975 he purchased a small Tasmanian company called Qintex, which by the late 1980s was part of a group worth $1.5billion.

At his peak Skase had interests in the Seven television network and the Brisbane Bears AFL club as well as owning five resorts.

Skase lived extravagantly, spending $450,000 on his 40th birthday party in 1988 and once sending a private jet from Port Douglas to Melbourne to pick up a dress for his wife Pixie.

After a failed bid to by the MGM film studios it became clear Qintex was severely overextended and Skase was forced to sell half his resorts to Japanese investors.

Money began disappearing from Qintex and Skase was reported to the Australian Securities Commission. Creditors moved in, Qintex collapsed and Skase was more than $700million in debt.

Skase was charged with improperly using his position to obtain management fees and spent one night in custody before his passport was returned.

He promptly fled to the Spanish island Majorca where he claimed to be suffering a life-threatening lung condition which made it unsafe for him to travel.

Despite repeated attempts to return the fugitive to Australia in what became known as the ‘chase for Skase’, he died of stomach cancer in Majorca in 2001.