Shooting great Michael Diamond won’t be wildly celebrating the 20th anniversary of winning gold in the men’s trap at the Sydney Olympics on Thursday.

Instead, he plans to stand on a hill overlooking the ocean at Merewether beach in Newcastle, north of Sydney, and ‘just have a little reminisce.’

The past few years have not been kind to Diamond, who also won gold at the 1996 Atlanta Olympics in the same shooting event.

‘I was pretty bad because I had everything taken away from me,’ he told Daily Mail Australia. ‘I only knew how to be a sportsman.’ 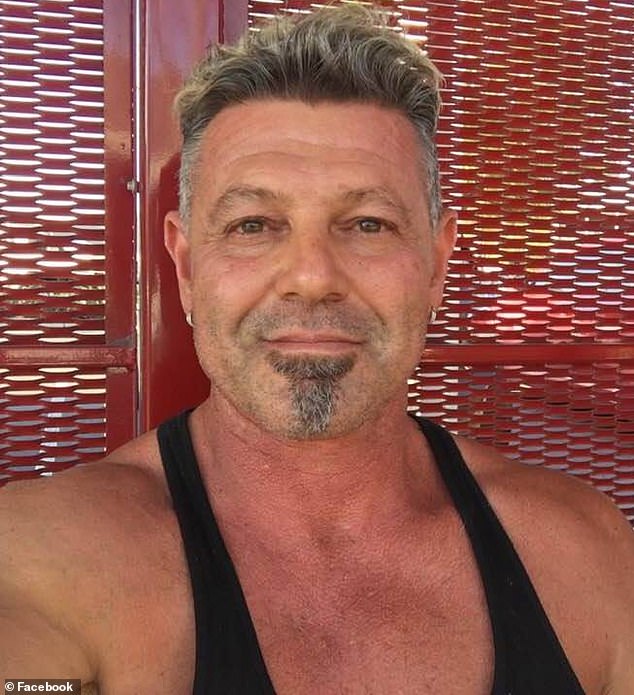 Shooting great Michaell Diamond will mark the 20th anniversary of winning his second gold medal at the Sydney Olympics by quietly reminiscing at a Newcastle beach. Diamond recently stared down death when he learnt he had a serious heart condition 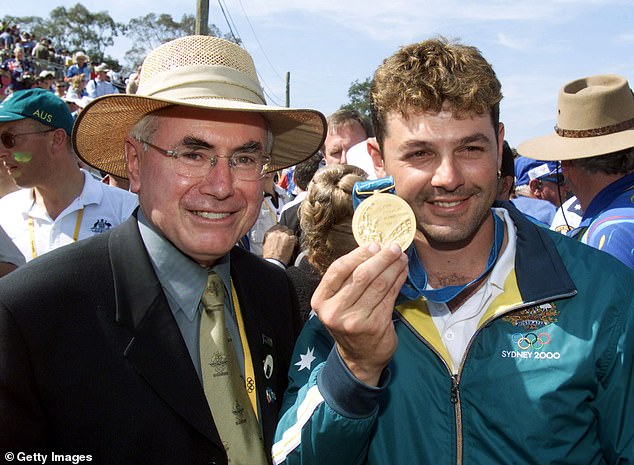 Diamond had won gold at the 1996 Atlanta Olympics in the men’s trap and backed it up with another win in Sydney. He is pictured with then prime minister John Howard on September 17, 2000 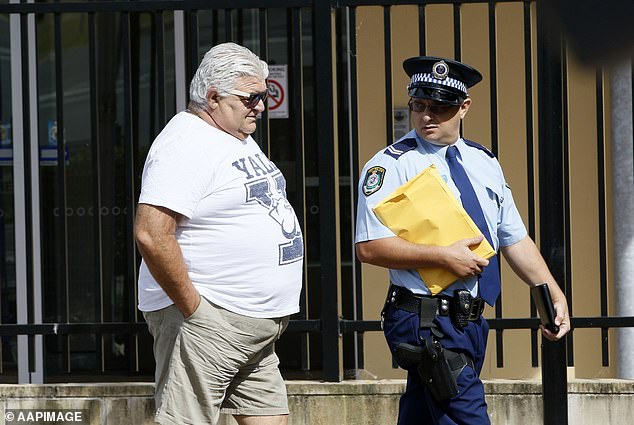 Diamond has had a long-running dispute with his brother John, pictured outside Raymond Terrace Local Court in November 2016. Diamond had an argument with his brother before being charged with high-range drink driving and firearm offences

Diamond was stopped from competing in his seventh Olympics, at Rio de Janeiro in 2016, when he was charged with high-range drink driving and firearms offences.

He is divorcing the mother of his three children and learnt last year his heart was in such bad shape he would need a transplant. His mother then died in November.

Diamond has auctioned his two gold medals to pay legal and medical bills and was forced to sell the Perazzi MX8 shotgun nicknamed Betsy that took him to Olympic victories.

The 48-year-old’s relationship with his brother John is in tatters, with the pair again facing off in court in July when his sibling was granted an apprehended violence order against him.

Diamond has not picked up a shotgun for years but he believes his Olympic career is not over and has set his sights on the Paris Games in 2024.

But first he has to get over four years of hell. 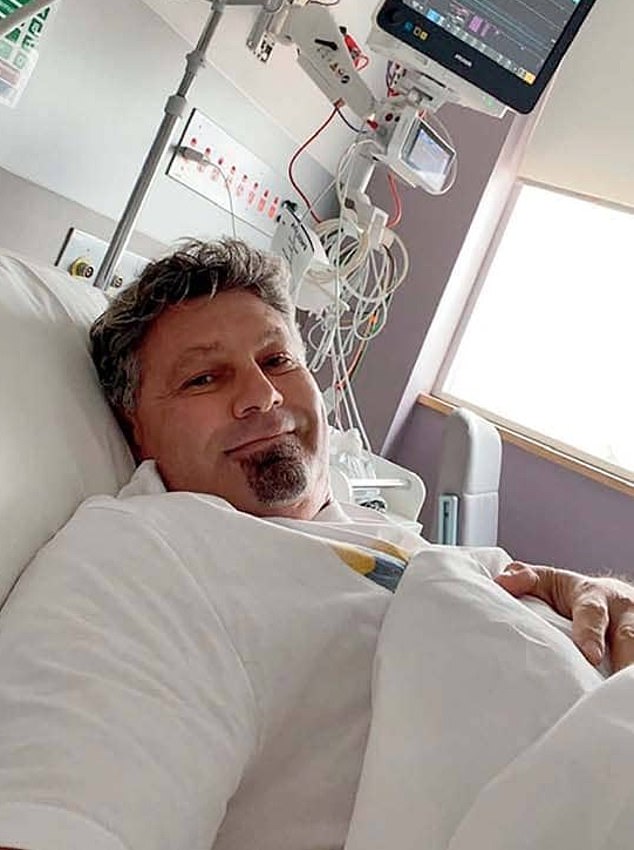 Eighteen months ago Diamond began struggling to breath at night and doctors later found his heart was functioning at about 15 per cent. Fluid had pooled around his stomach and legs and by early this year Diamond was in hospital staring down death. He is pictured in hospital 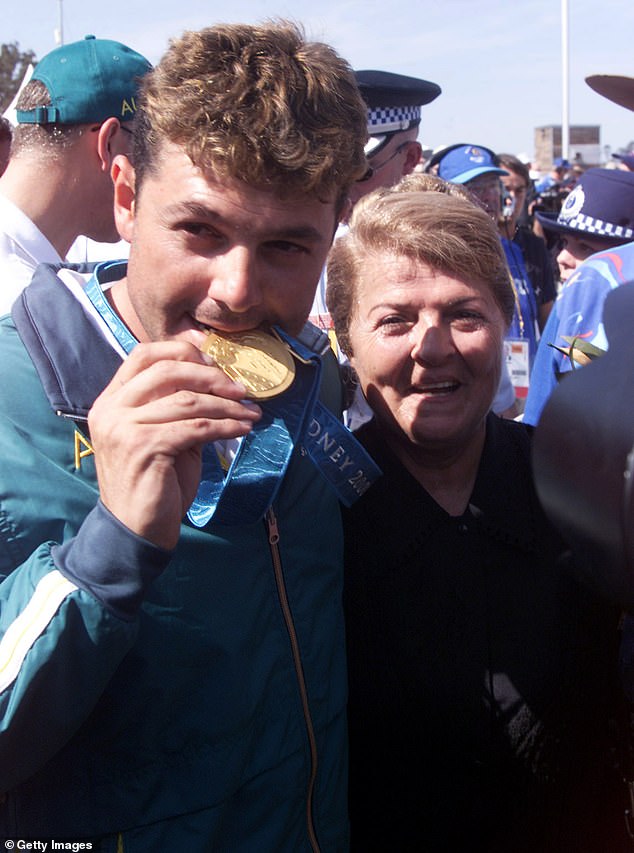 Diamond was stopped from competing in his seventh Olympics, at Rio in 2016, when he was charged with high-range drink driving and firearms offences. His mother Aphrodite died in November last year. Diamond is pictured with his mother after winning gold in Sydney

Eighteen months ago Diamond began struggling to breath at night and doctors later found his heart was functioning at about 15 per cent.

Fluid had pooled around his stomach and legs and by early this year Diamond was in hospital staring down death.

Diamond realised what he was facing but was more worried about how his daughters Isabella, 17, Angelica, 14, and Rihanna, nine, would handle life without him.

While Isabella and Angelica knew what their father was going through, Rihanna did not understand the prognosis.

‘She could sense that something wasn’t right,’ Diamond said. ‘I know that because the questions that she would ask me were concerning her, and concerning for me as well.

Diamond spent three months in hospital where his infected gall bladder was removed while he received treatment for his heart condition.

He made such a miraculous recovery he no longer needs a transplant. 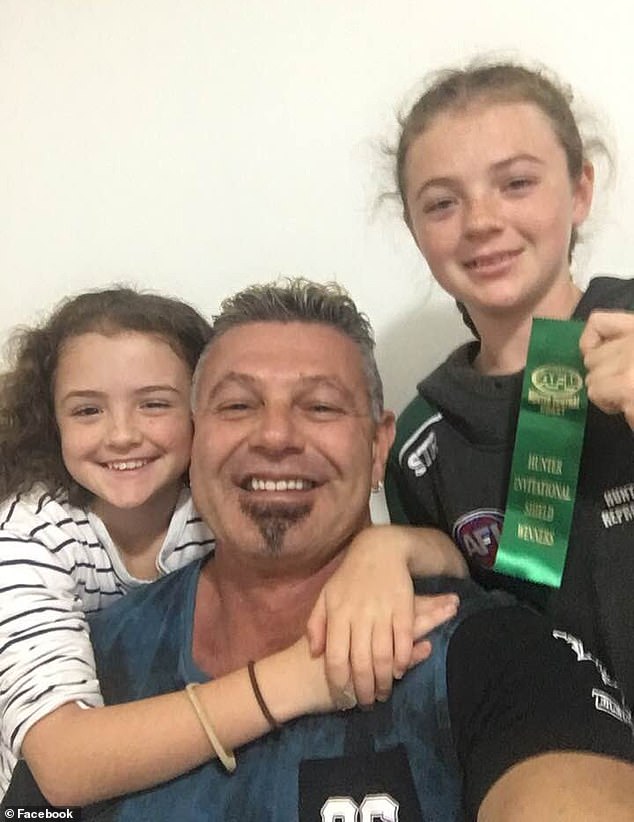 Diamond knew the seriousness of his heart condition but was more worried about how his daughters Isabella, 17, Angelica, 14, and Rihanna, nine, would handle life without him. Rihanna did not understand the prognosis. He is pictured with Angelica and Rihanna

Diamond was not a smoker but has stopped drinking alcohol, removed junk food from his diet and now takes heart medication.

Medical expenses piled up on top of old legal bills, which Diamond described as ‘astronomical’.

‘It was pretty bad,’ he said. ‘I had my late mum supporting me there for a long time in fact, so yeah, it was more or less struggle street.’

Diamond sold his Atlanta gold medal for $62,000 in December, two years after auctioning his Sydney medal for $72,000. Not even that was enough.

‘The last thing I ever wanted to do was offload my two Olympic gold medals but I had bills after my court case which I’m still paying off,’ he said.

‘It’s just the way it was. I’m just dealing with it at the moment but I’m happy to be here to be able to deal with it. There’s always a brighter side of things in life.’ 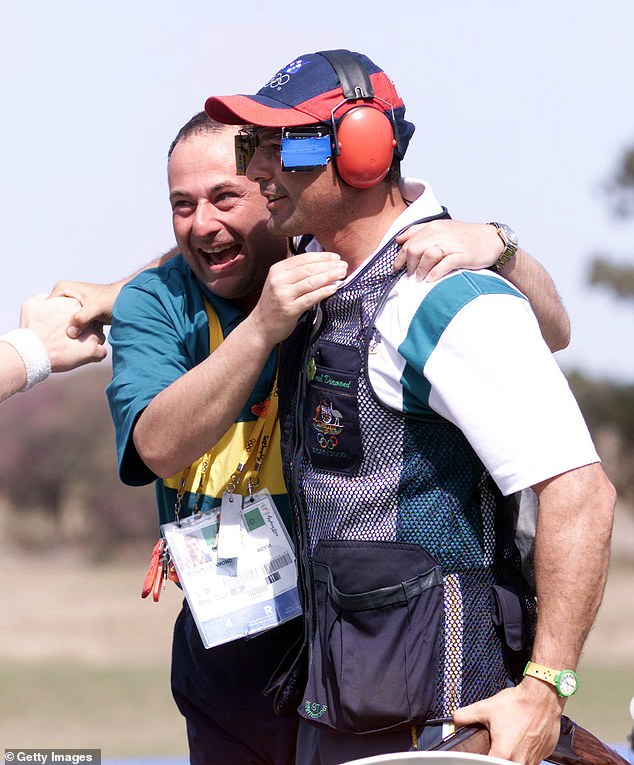 The death of Diamond’s mother came 19 years after he lost his father and long-time coach Con, three months before the Sydney Olympics.

Diamond gets emotional when he recalls September 17, 2000 as he sat alone in the Australian team room before the men’s trap gold medal shoot.

‘I was just having a quiet moment to myself,’ he said. ‘I had my head between my hands and then suddenly the door opened, so I looked up and there stands Peter Brock.’ 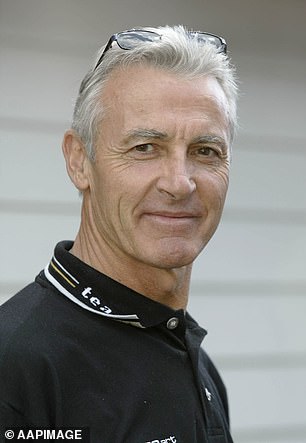 Brock was a liaison officer for the Australian team and Diamond, a ‘self-confessed rev head’, was overwhelmed by the presence of the nine-time Bathurst 1000 champion.

‘I stood to attention because it was truly unbelievable,’ Diamond said. ‘He’s a legend.

‘He was an idol of mine and I honestly think that just his presence gave me the extra strength to go out and do the job in Sydney.’

Diamond, then 28, duly went out and won the final, dedicating the gold medal to his father.

Success in Sydney after winning in Atlanta helped confirm shooting a legitimate sport in Australia, according to Diamond.

‘Absolutely I think the sport then became socially acceptable,’ he said.

‘After Atlanta the general public viewed the sport of clay target shooting as responsible, rather than a frowned upon event, which I’m very proud of.’

Diamond’s back-to-back wins made him an Australian sporting star but a series of off-range events conspired to sometimes overshadow his Olympic achievements. 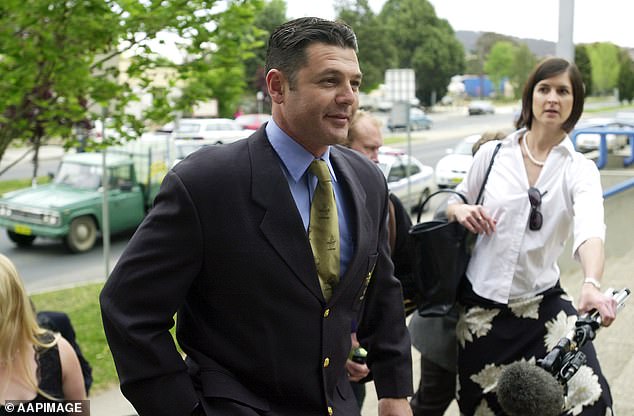 Diamond’s back-to-back wins made him an Australian sporting star but a series of off-range events conspired to sometimes overshadow his Olympic achievements. He is pictured at Queanbeyan Local Court after he was charged with assaulting his then girlfriend in 2003

He now wants to set the record straight about some of the unfavourable publicity he attracted after his victory in Sydney.

‘That is very important to me,’ Diamond said. ‘Being who I am I’m often a target for people just to tee off on.’ 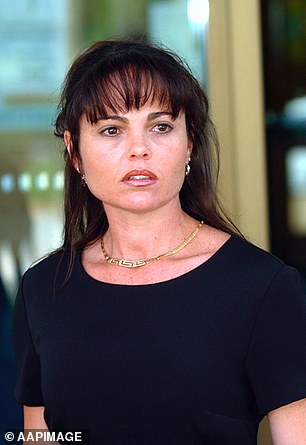 In September 2003 Diamond was charged with assaulting his then girlfriend Tracey Kennedy at an 80th birthday party at Queanbeyan after which police found an unsecured shotgun in his home.

The assault charge was dismissed and no conviction recorded for failing to keep the firearm safe but Diamond had to fight to compete at the Athens 2004 Olympics and ultimately missed the finals.

Diamond won the trap world title in 2007, finished fourth in the London 2008 and Beijing 2012 Olympics and hoped to be Australian flag bearer for his seventh Games in Rio in 2016.

That year he was charged with high-range drink driving after refusing to submit to a roadside breath test, which followed a domestic dispute with his brother John at Nelson Bay.

Police found a disassembled shotgun in his car and he was found guilty of not keeping a firearm safe as well as being in custody of a firearm while intoxicated.

By the time Diamond had those convictions overturned he had missed selection for the Rio Olympics.

In 2017 police were granted an interim apprehended violence order to protect Diamond from his wife Cathy, from whom he is now separated.

‘It got tossed out of court,’ Diamond said. ‘I was prepared to fight it. The story had no substance.’ 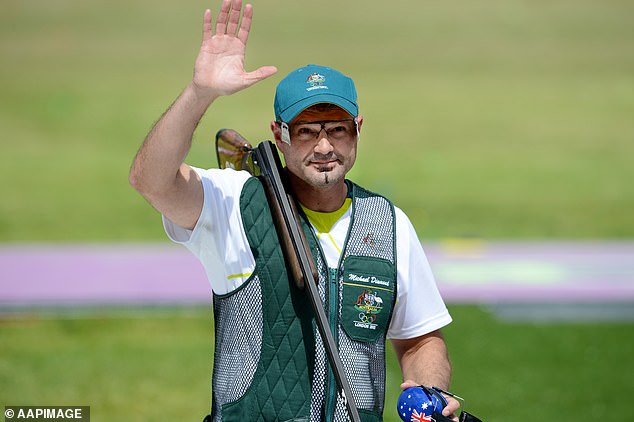 Diamond won the trap world title in 2007, finished fourth in the London 2008 and Beijing 2012 Olympics and hoped to be flag bearer for his seventh Games in Rio. He is pictured in London

This year an AVO was granted against Diamond when he was put on a two-year conditional release order after admitting using a telephone to harass his brother.

Diamond told Daily Mail Australia he had called John more than 25 times to sort out a dispute over their mother Aphrodite’s will. John was once briefly Diamond’s manager but the pair no longer speaks.

Diamond is running a laundromat and lives at Bolton Point at Lake Macquarie near Newcastle. ‘I absolutely love it,’ he said. ‘It’s beautiful here.’

While he won’t be competing at the postponed Tokyo Olympics next year because Australia has already picked its team he is aiming for the next Games in Paris.

As for his prized Perazzi shotgun, Diamond said the mate he sold it to in Adelaide knows that one day he might want to buy it back.

‘I haven’t picked a gun up in some several years because of the flavour that’s left in my mouth,’ he said.

‘However I will wash it out in the next few years to come and get motivated again.’ 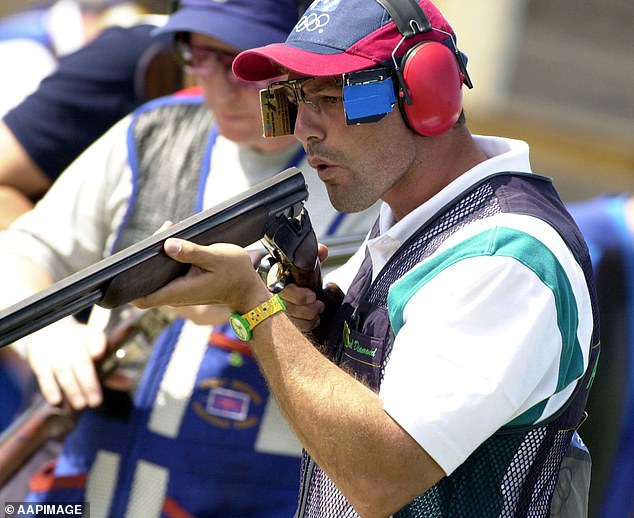 Diamond was forced to sell the Perazzi MX8 shotgun nicknamed Betsy that took him to Olympic glory in Atlanta and Sydney. He is pictured with Betsy in Sydney