TAIPEI — Huawei Technologies on Thursday remained defiant in the teeth of a U.S. crackdown, insisting it will put its own operating system into its smartphones and expand its ecosystem of apps as it tries to survive a battle over tech between Washington and Beijing.

The Chinese tech champion — the world’s biggest seller of smartphones in the most recent quarter — said all its phones next year will be upgraded to support HarmonyOS, the company’s own version of Google’s Android operating system.

“We are going to release all the development kits for smartphones this December,” Richard Yu, CEO of Huawei’s consumer electronics business group, told the company’s developer conference on Thursday.

The move to deploy HarmonyOS on its smartphones suggests the Chinese company no longer expects to resume its collaboration with Google. When it first introduced its own operating system last year, Huawei said it would still prioritize use of Google’s Android system and services where it could.

Huawei, along with Samsung Electronics, Xiaomi and others, has been one of the main brands behind the success of Google’s Android platform. Apple on the other hand uses its own iOS system for its iconic iPhones.

HarmonyOS 2.0 could be available for all of its devices, from smartphones, wearables and smart displays to automotive systems, said Yu. 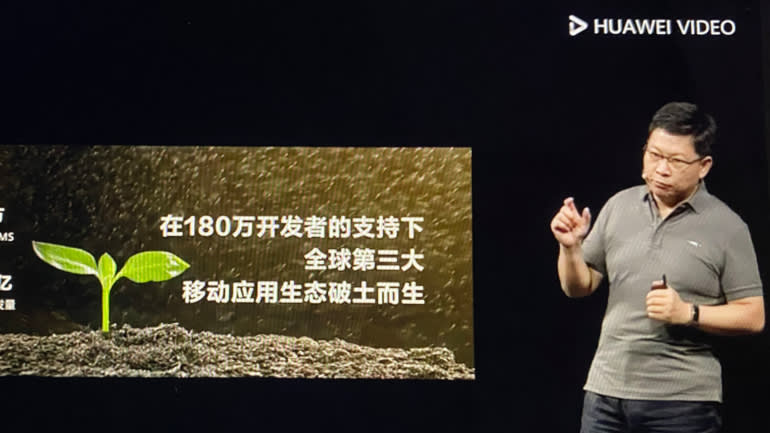 “Huawei is now experiencing the third round of the U.S. crackdown but we are still maintaining growth in all of our products in smartphones, tablets, wearables … and we don’t think anyone could put the starlight out of the sky,” said Yu.

“Every one of our developers is a star, and together they form a brilliant array. That will light the way.”

But the executive said a shortage of chips because of Washington’s ban on supplying Huawei has started to affect growth momentum for Huawei’s smartphone sales this month.

The Chinese company is also gearing up to build its own mobile app ecosystem to replace Google Mobile Service, including all the widely-used applications for overseas users, from Google Map and Gmail to YouTube and Google Play — the key gateway for Android smartphone users to download mobile apps.

Even though Google had stopped collaborating with Huawei, the Chinese company could still use Android, an open-sourced platform. However it could not get updates or technical support and could not get access to Google Mobile Service.

However that is still less than one-tenth of the number of app developers on either Apple’s iOS or the Android platforms.

Huawei’s pledge to use its own ecosystem comes days before a new U.S. export control rule takes full effect. From Monday all chip and electronics component suppliers will need a licence to ship to Huawei if they use American tools, or softwares in their development and production processes.

Yu said that after a year’s efforts, Huawei’s mobile services had wireless data transmission speeds 20% faster than the Google equivalent, while its application programming interface was also more powerful.

Huawei’s AppGallery, its version of Google Play, has emerged as a rising app store provider with more than 70,000 international apps compared with only 6,000 last year, according to the company.

However Huawei’s ambition for its mobile app platform and operating system could be put at risk by the U.S. government’s expansion of its “Clean Network” initiative, which aims to exclude Chinese government-linked companies from a wide range of areas including network infrastructure, undersea cables, mobile apps and app stores.

Huawei overtook Samsung Electronics to become the world’s biggest smartphone maker for the first time in the April-June period. However, many market watchers see huge uncertainty ahead and flag that Huawei’s smartphone business could shrink from next year.

“Huawei’s inventories for its smartphone business could at least sustain until the end of this year, but it will hit a huge problem next year if the U.S. does not ease the ban,” said Jeff Pu, an analyst with GF Securities.

Huawei could still manage to ship 195 million smartphones this year but the number could plunge to 50 million next year if the U.S. regulation did not change, according to a GF Securities estimate.