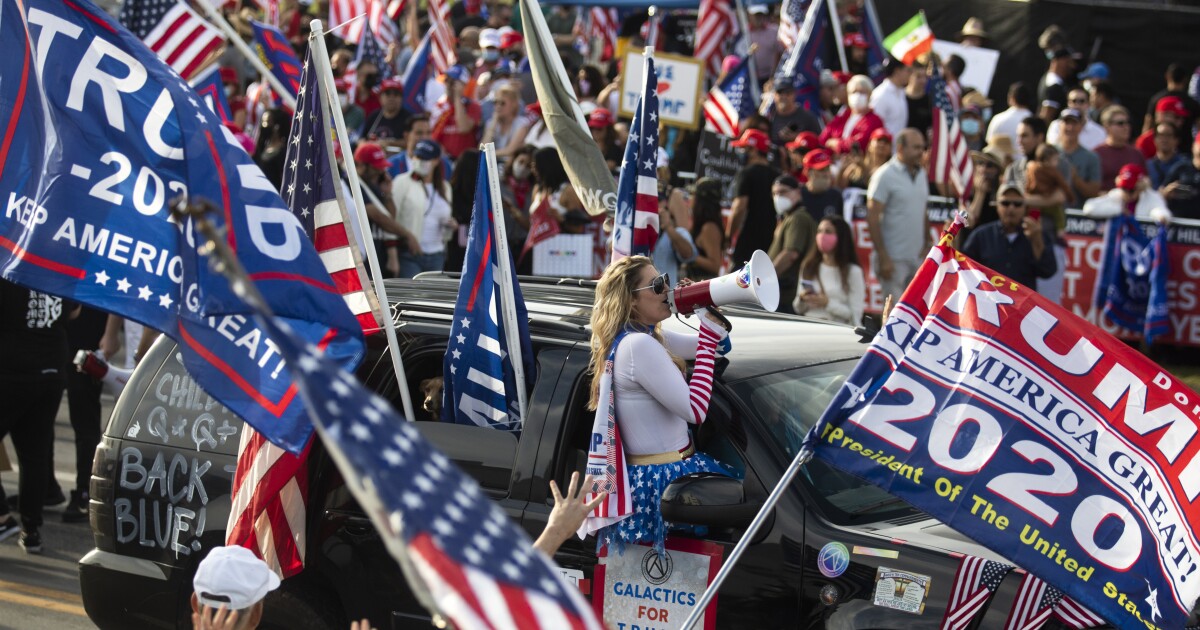 As they have for weeks now, hundreds of Trump supporters rallied in Beverly Hills on Saturday, three days ahead of the Nov. 3 presidential election.

There were media reports that counter-protesters would show up in force at this week’s rally, but that did not appear to be the case. Police in riot gear stood nearby and employees guarded storefronts along Rodeo Drive, but the crowd remained mostly peaceful.

Earlier Saturday, however, a counter-demonstrator did get into a fight with a pro-Trump protester at a separate rally at Roxbury Park, also in Beverly Hills, where officers broke up the fight and declared an unlawful assembly, according to police. No arrests were made.

Billy Bickford, 52, of Fontana said that he has traveled all across the country selling Trump merchandise but that Saturday’s rally was one of the busiest he has seen in weeks.

Bickford estimated he made about $2,000 in just a few hours selling Trump 2020 shirts, hats and flags.

“I’ve been in this corner for the last three weekends, and I haven’t seen anything like this,” he said, as he jumped from customer to customer.

Trump is deeply unpopular in California, particularly on Los Angeles’ affluent Westside. Numerous protests have slammed the president’s divisive policies, ranging from attacks on immigrants and rollbacks of environmental safeguards to his personal conduct and statements critics say are racist.

A recent poll on the presidential race had Biden leading Trump in California by historic margins.

Nearly four months ago, Beverly Hills resident Shiva Bagheri began organizing the rallies in part to dispel what she called misrepresentations of Trump supporters in the media.

“They think that we’re all white supremacists. And that’s just ridiculous,” said Bagheri, a single mother who was born in Iran and works as a dance instructor.

At last Saturday’s rally, the crowd numbered between 2,500 and 3,000, according to a Beverly Hills city spokesman. Signs and shirts announced a kaleidoscope of identities in support of Trump, including members of the Latino, Jewish, Vietnamese and LGBTQ communities. Some traveled from out of the state or out of the country to attend.

Beverly Hills has faced criticism for how it has handled some street demonstrations. Since June, the city has prohibited protests in residential areas after 9 p.m. Twenty-five protesters were arrested and are being prosecuted for violating the curfew. Beverly Hills moved forward with the charges even as Los Angeles and other cities have decided against charging peaceful protesters who violated curfews.