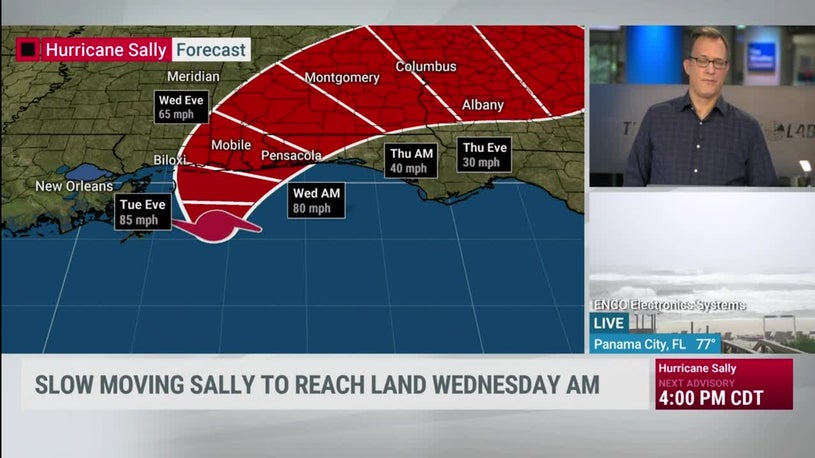 With Hurricane Sally slowed to a crawl, hundreds of thousands hunkered down Tuesday in Mississippi, Alabama and Florida awaiting the storm’s landfall.

Sally, however, was already causing flooding and other problems along a stretch of the northern Gulf Coast from Apalachicola, Florida, to Gulfport, Mississippi, even though landfall was still a day away.

A barges and casino boats tore loose from their moorings, high winds forced bridges to close and floodwaters made travel difficult in many coastal communities.

Evacuations were ordered in parts of Louisiana and Mississippi, and officials in Alabama and Florida urged residents to voluntarily evacuate, especially those living in low-lying areas prone to flooding.

“This is going to be historic flooding along with the historic rainfall,” Stacy Stewart, a senior specialist with the National Hurricane Center, told The Associated Press. “If people live near rivers, small streams and creeks, they need to evacuate and go somewhere else.”

The governors of Louisiana, Mississippi and Alabama declared states of emergency, and President Donald Trump issued emergency declarations for parts of those states. Florida’s governor declared a state of emergency in the Panhandle counties of Santa Rosa and Escambia.

Airlines, including Southwest, Delta and United have waived fees for passengers who need to change their flights because of Hurricane Sally. Southwest canceled flights at Louis Armstrong International Airport in New Orleans through Wednesday afternoon, nola.com reported.

Here are some of the steps states are taking to prepare for the arrival of Hurricane Sally.

Sally was causing flooding and street closings in Florida’s Panhandle on Tuesday morning.

The city of Gulf Breeze tweeted that the Bay Bridge would remain closed until Hurricane Sally had passed and state Transportation Department officials could examine the bridge. Tolls were lifted on the Garcon Point Bridge about six miles to the east.

The Lillian Bridge on U.S. 98 over Perdido Bay to Alabama and the Theo Baars Bridge to Perdido Key also closed.

Firefighters left Pensacola Beach and Perdido Key for the mainland Tuesday morning, the Pensacola News Journal reported. Escambia County officials said sheriff’s deputies would remain on the beaches to respond to calls for service as long as it was safe.

South Garcon Point Road at Katie Street was closed in Santa Rosa County because of the weather. Street flooding also was reported in Okaloosa County.

Gov. Ron DeSantis declared a state of emergency for Escambia and Santa Rosa counties in the Florida Panhandle.

Voluntary evacuations were issued for parts of Escambia County, including Perdido Key and Pensacola Beach. The Pensacola Bay Center was being opened as a shelter.

Escambia, Okaloosa and Santa Rosa county schools were closed Tuesday and planned to remain closed Wednesday because of Sally.

The University of West Florida announced all of its in-person classes are either going fully remote or are canceled from noon Monday through Tuesday. Pensacola State College also closed Monday.

Dauphin Island also was already seeing the effects of Hurricane Sally. Emergency officials had to pick up about a dozen people stranded as sand and ocean water began to inundate the western part of the island on Monday.

Mayor Jeff Collier said emergency officials drove a Humvee to pick up 12 to 15 people, including an infant, AP reported. At least four cars were lost.

“We weren’t able to move the vehicles, they were already stuck in the sand,” Collier said.

Tuesday morning, Collier said the island lost power about 5:15 a.m. Some 3,000 customers had no electricity, according to officials with Alabama Power.

In Bayou La Batre, at least two casino boats broke free from their moorings and smashed into docks, according to video shared on social media.

“We’ve handed out more sandbags today than we’ve ever handed out. We had a dump truck and almost two dump truckloads of sand,” Downey said.

“We’re ready just hope this thing comes on and goes away,” he said.

On the other side of Mobile Bay in Baldwin County, voluntary evacuations were urged in communities along the Gulf of Mexico like Gulf Shores and Orange Beach, as well as vulnerable inland areas.

“I think that it’s very important that people really pay close attention to this system and not focus on what category of storm that it may be,” Jenni Guerry, deputy director of emergency management in Baldwin County, told weather.com in a phone interview. “Each and every storm is very unique and we are expecting some very significant, historical flooding and rainfall amounts with this system.”

Up to 24 inches of rain could fall in some parts of the county, according to the National Hurricane Center. Guerry said winds, high waves and storm surge are also concerns.

The county opened a shelter but officials said it should only be used as a “last resort,” according to al.com. Two shelters opened in Mobile County.

If that happens, “the damage is going to be unbelievable as far as uprooting trees,” Stimpson said. “That’s my biggest fear, the tree damage we could have.”

Many school districts, including Mobile and Baldwin counties public schools, canceled classes for Tuesday and Wednesday.

The Alabama Department of Transportation planned to close the Bankhead Tunnel in Mobile at 10 a.m. Tuesday ahead of Sally’s potential storm surge.

“I urge everyone in the coastal areas south of I-10 and in low-lying areas to take all precautions and heed advice from weather experts and local officials. Please stay vigilant, Alabama,” Gov. Kate Ivey said Tuesday morning.

Even in Montgomery, which is almost 140 miles inland, city officials offered sandbags to residents to prepare for potential flooding from Sally.

The Mississippi Gaming Commission ordered the 12 casinos in the state to close Monday evening.

(MORE: Full List of Evacuation Orders Ahead of Sally)

Rupert Lacy, Harrison County emergency management director, said U.S. Highway 90 will become impassable and water will back up into the Bay of Biloxi, Bay of St. Louis and area rivers, lakes and low-lying areas, the Biloxi Sun Herald reported.

(WATCH: Why Slow-Moving Tropical Systems Are the Worst)

More than a dozen school districts along the coast remained closed Tuesday.

In St. Bernard Parish, parish President Guy McInnis said water was pooling on roadways in low-lying areas, WVUE reported. He said the call for voluntary evacuations would remain in place for now.

“We’ve, you know, been through this with Katrina 15 years ago, and when that storm sits there and it’s slow-moving, it just continues to bring water into our lower-lying community. Right now we’re getting that northeast wind. … We’re still going to feel the effects all throughout today.”

The parishes of St. Charles and St. John the Baptist lifted evacuation orders. Plaquemines Parish lifted the mandatory evacuation order for the West Bank, but the order remained in place for the East Bank.

The town of Grand Isle, Louisiana, on a tiny barrier island in the Gulf, also was under a mandatory evacuation order.

Mandatory evacuations also were ordered in the Jean Lafitte area of Jefferson Parish, too, including Barataria and Crown Point, and in parts of Lafourche Parish.

All public schools in at least eight parishes were closed Tuesday, as were many Catholic schools. Xavier and Loyola universities canceled Tuesday classes.