Melburnians are now evenly divided on family-visit restrictions as part of Victorian Premier Daniel Andrews’ Stage 4 lockdown, which is now in its fifth week.

Half of Melburnians think they should be able to visit immediate family while the other half believe it should still be banned, according to an SMS survey by market research company Roy Morgan released on Thursday.

Meanwhile, 47 per cent of all Victorians think Melburnians should be able to visit their family while 53 per cent still support the restriction.

Interestingly, the age bracket that most supports easing of restriction is those aged over 65, with 57 per cent of them backing more access despite being the age group most vulnerable to coronavirus. 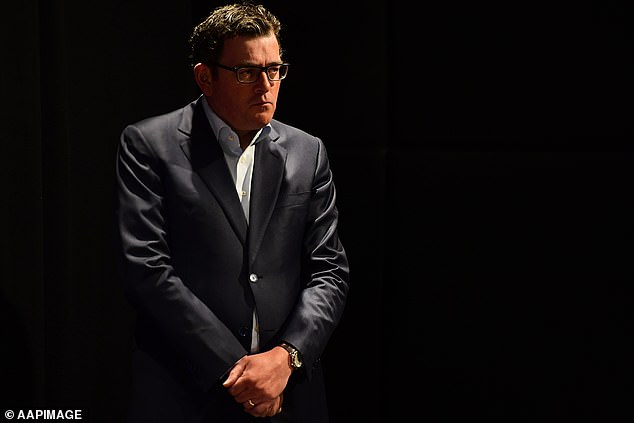 Victorian Premier Daniel Andrews at a press conference on Thursday. Mr Andrew’s Stage 4 lockdown is proving to be divisive among Melburnians, with 50 per cent opposing the ban on visiting immediate family

Support is also decreasing for other restrictions such as Melbourne’s 8pm-5am curfew, which bans people from leaving their homes within these hours.

Last week, 72 per cent of Victorians supported the curfew but that has dropped down to 61 per cent this week.

Melburnians are currently only able to get takeaway or delivery from cafés and restaurants because table service, even when socially distanced, is banned.

Support for this restriction has dropped by 14 per cent in the last week, with 61 per cent of Victorians still believing socially-distanced table service should be banned. 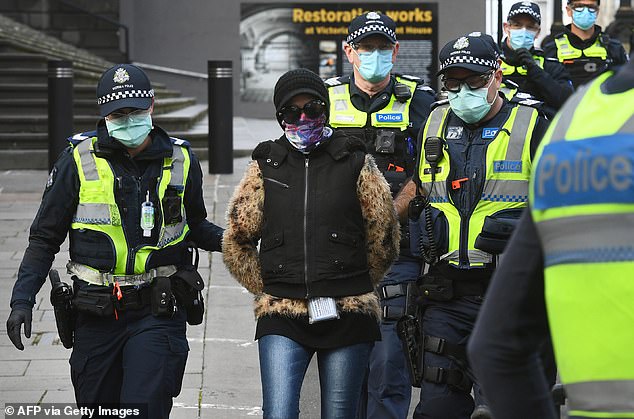 An anti-lockdown protestor is arrested at a failed rally last month. Last week, 72 per cent of Victorians supported the curfew but it has dropped by 11 per cent down to 61 per cent this week

Residents of the Victorian capital are limited to travelling within 5km of their home.

There has also been an 11 per cent drop in support for the regulation banning people from travelling more than five kilometres from their homes, but it still does have the support of 60 per cent.

The overwhelming majority of country Victorians (75 per cent) support the ban on Melburnians travelling to the countryside.

All schools in Victoria have been closed since August 2, other than for the children of permitted workers who cannot work from home, and for vulnerable children.

Two-thirds of Victorians (68 per cent) say schools and day care centres in Melbourne should not be re-opened to everyone. 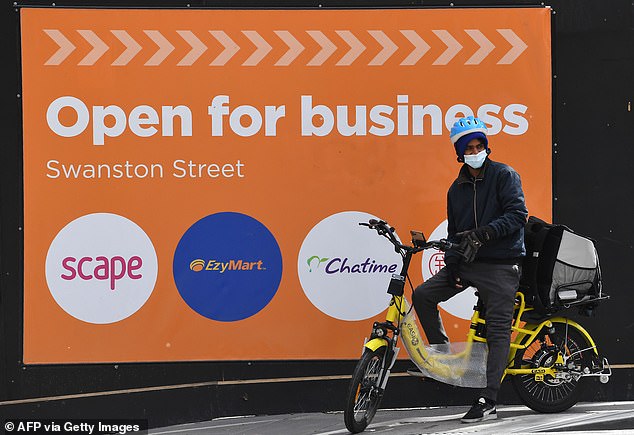 A food delivery rider waits to cross the road in the Melbourne CBD on Wednesday. Melburnians are currently only able to get takeaway or delivery from cafés and restaurants as table service, even when socially distanced, is banned

All Victorians are required to wear face masks when they leave their homes for shopping, exercise and permitted work.

The vast majority of Victorians still support this rule with 87 per cent saying it should continue while just 13 per cent disagree.

Melbourne’s current lockdown began on August 2 and is expected to last six weeks, meaning that next week could be the final week of lockdown unless it is extended. 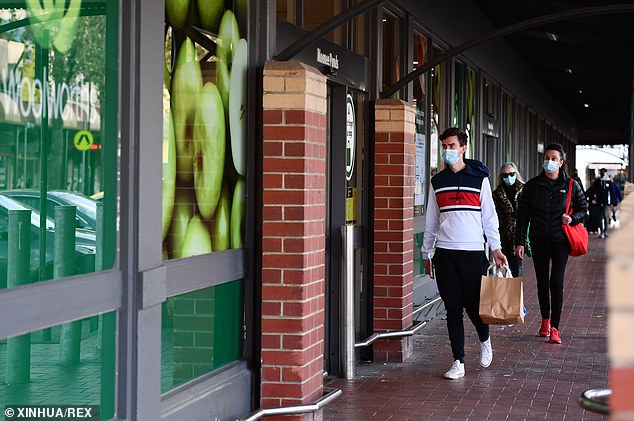 People wear face masks as they go shopping in Melbourne on Monday. The vast majority of Victorians still support the mandatory wearing of face masks with 87 per cent saying it should continue