January Jones has been keeping busy while in home quarantine in Los Angeles by sharing steamy bikini photos and videos of herself on social media.

And on Sunday, amid a scorching heat wave in recent days, the Mad Men alum took to Instagram and shared about how she’s hunkering down inside her house in an effort to beat the heat.

‘Decided to put on mkup today, to sit inside and watch movies and b-ball playoffs. 109 degrees out,’  she captioned a photo showing herself looking busty in a plunging white lace dress, along with a flame emoji. 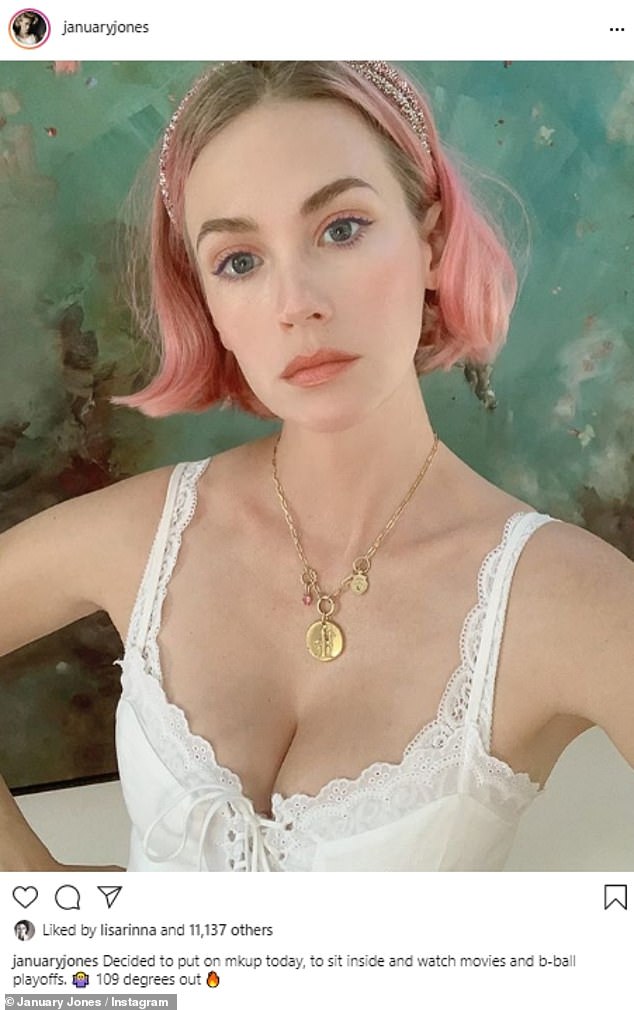 Busty: January Jones shared about staying inside due to the ongoing heat waves in Los Angeles along with a picture showcasing her ample cleavage in white lace dress

In the snap, the South Dakota native stared directly into the camera with her hair dyed pink and styled into a bob-cut just above her shoulders.

She also wore a stylish headband to help keep her hair off her face and a gold charm necklace while flashing a confident and relaxed look on her face.

Feeling flirty, the actress, 42, leaned forward for a selfie snap in the same dress, seemingly teasing her one million followers with her busty display.

‘Can’t go outside into the heat so I’m doing makeovers,’ she wrote across the picture in a reference to her glam day at home. 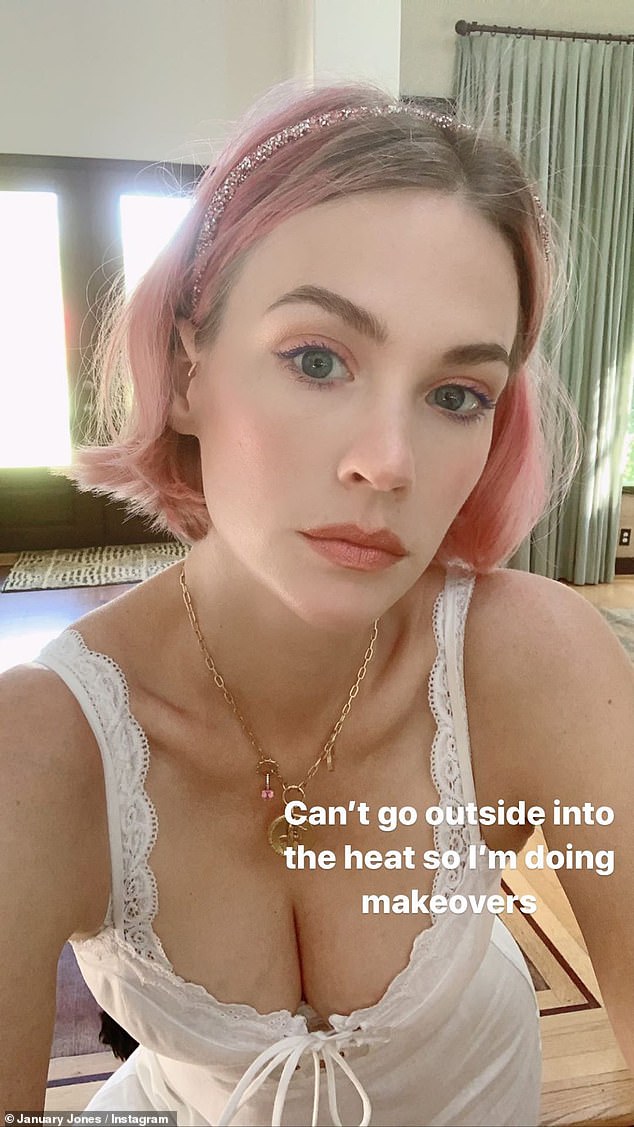 Flirty: The 42-year-old actress also shared about glamming it up at home doing makeovers in another picture of her flaunting her ample assets 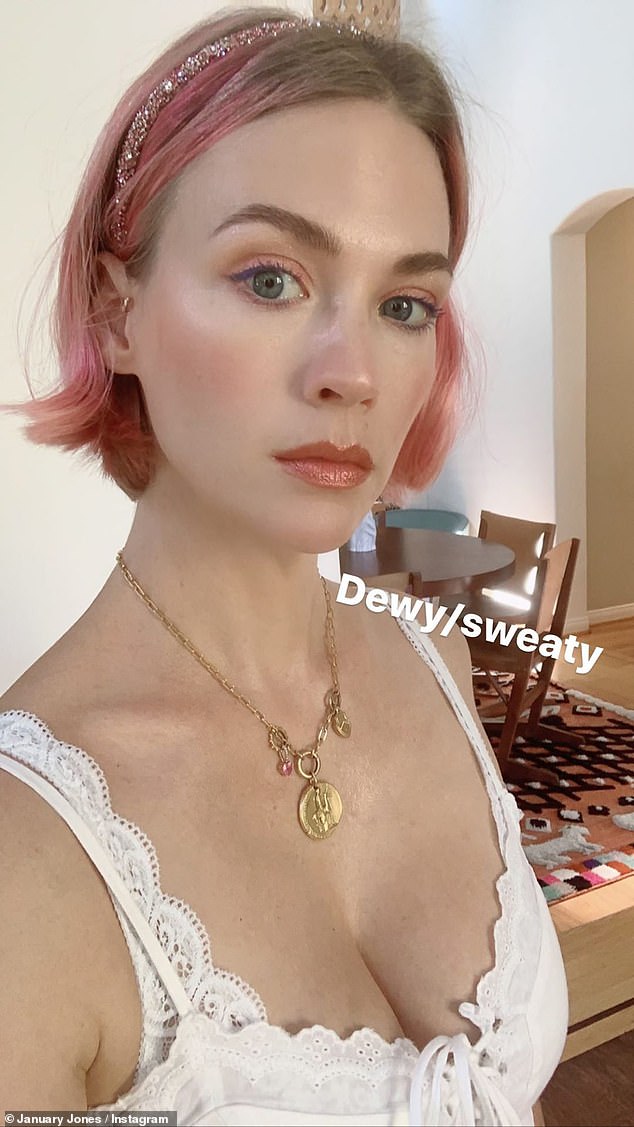 Glammy: Jones also wore a stylish headband to help keep her dyed pink hair off her face and a gold charm necklace

In another attribution to the steamy weather, Jones shared a third selfie showing her in a side glance with the headline: ‘Dewy/sweaty.’

Just last month, Jones posted some busty bikini snaps taken while she frolicked in and around her pool.

In the caption she teased her fans and followers by declaring how she’s ‘literally thirsty’ due to it being 103 degrees Fahrenheit. 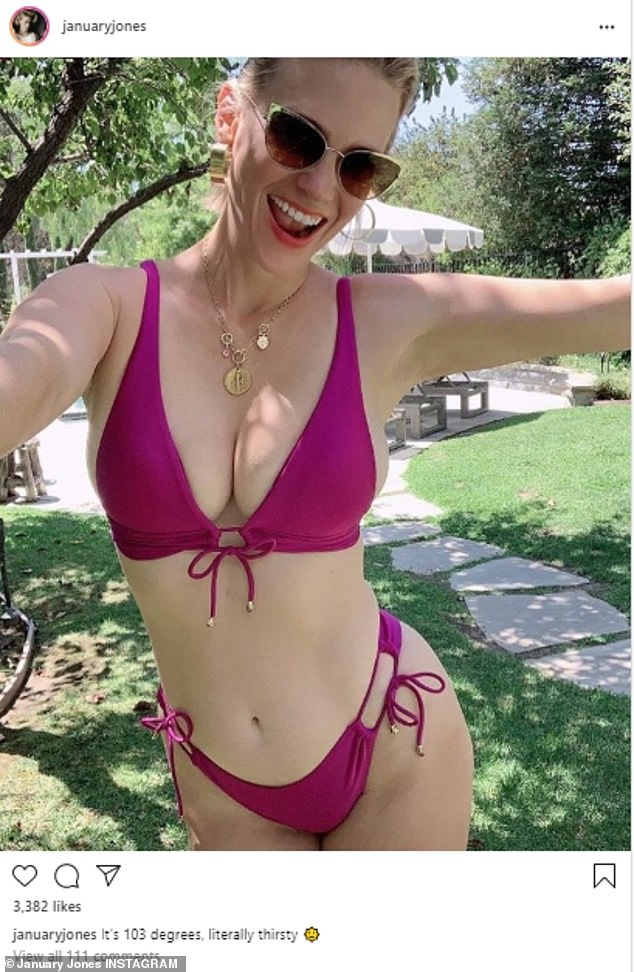 Steamy: The actress has been keeping busy while in home quarantine in recent months by sharing steamy bikini photos and videos of herself on Instagram 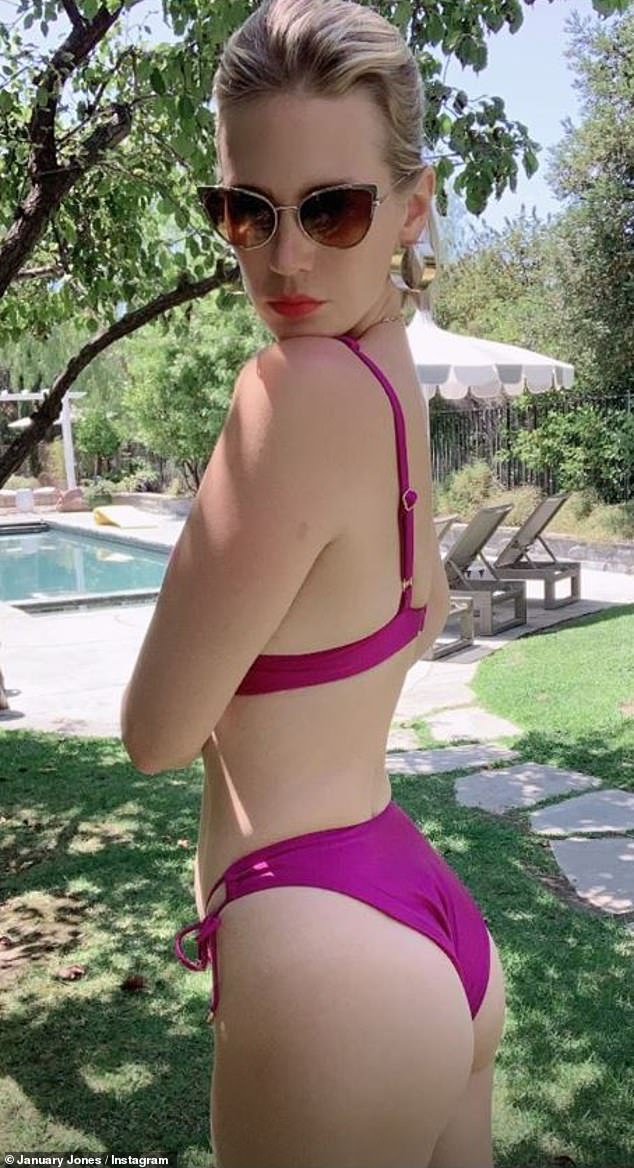 Exhibitionist: The Last Man On Earth star has heaped praise for her ‘flawless complexion’ and ‘fab figure’ from a slew of Instagram fans on followers

The two-time Golden Globe nominee has not been shy in regularly sharing sultry pinup snaps of herself on social media, which has garnered much praise in the comments section about her ‘flawless complexion’ and ‘fab figure’.

But she is best known for her role as Betty Draper in the wildly successful period drama series Mad Men for seven seasons (2007-2015), as well as four seasons on the post-apocalyptic series The Last Man On Earth (2015-2018). 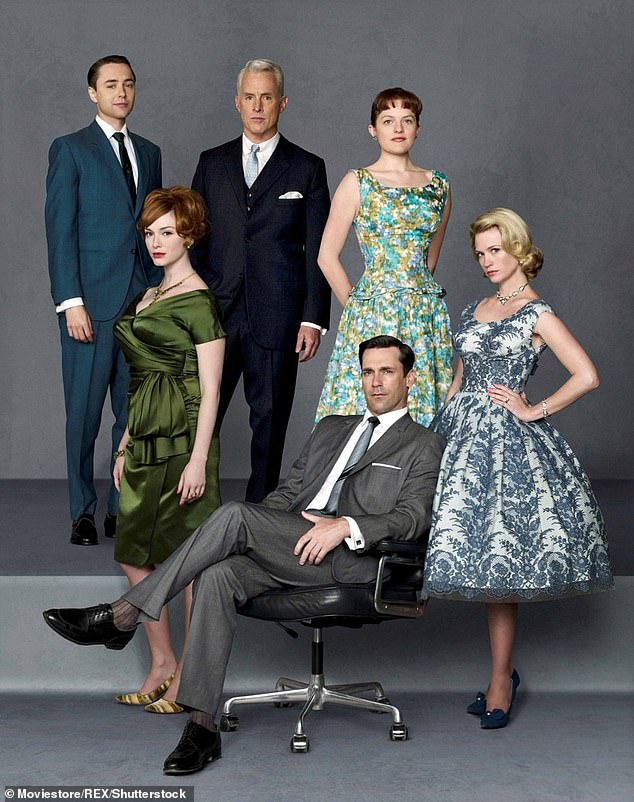 Breakout: The South Dakota native is best known for her role as Betty Draper in the wildly successful period drama series Mad Men for seven seasons (2007-2015)