They haven’t been shy in showcasing their hot and heavy relationship since they began dating nearly two years ago to the day.

And on Friday, Valentine’s Day, Jennifer Lopez and fiance Alex Rodriguez kept up with their open book policy when they both shared intimate feelings about one another on Instagram.

The sweet sentiments came just moments before they couple headed out for a romantic dinner for two at the San Vicente Bungalows in the West Hollywood neighborhood of Los Angeles.

Scroll down to videos 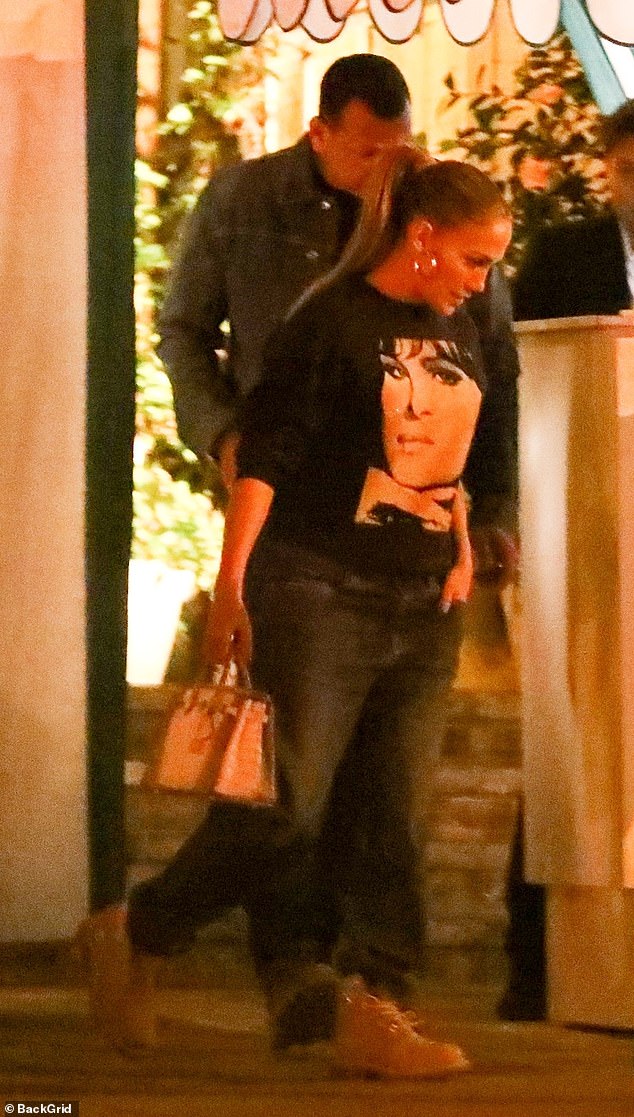 Sweethearts: Jennifer Lopez and fiance Alex Rodriguez were spotted browsing at Pink Taco before heading to a romantic dinner for two on Valentine’s Day in Los Angeles on Friday

The couple were first spotted when they made a stop by Hollywood’s famous Pink Taco.

The Love Don’t Cost A Thing star, 50, dressed down, but still stylish, in baggy blue jeans and a black sweatshirt.

She also donned a pair of brown Timberland-style boots and pulled her dyed blonde locks into a tight ponytail.

Lopez appeared to be be intensely browsing at the famous fast food before they headed over to the swanky restaurant for Valentine’s Day.

Rodriguez, 44, was also dressed casually-cool in sneakers and jeans. 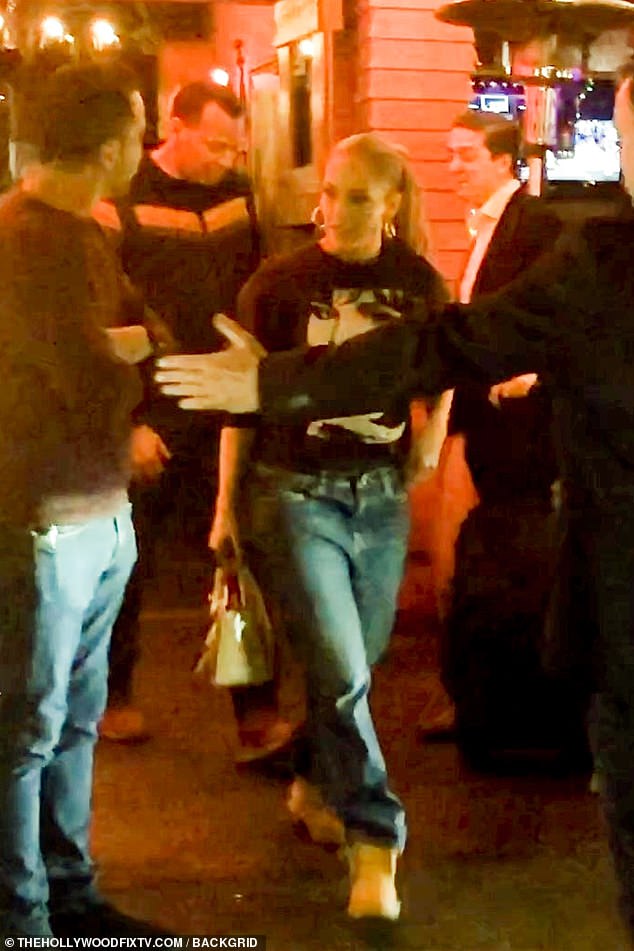 Easy does it: The couple both dressed down in jeans for their night out on Valentine’s Day

The couple were also photographed during their ride to dinner night spot, with the former baseball great taking over the driving duties.

Earlier in the day the triple threat star took to Instagram to share her love for ARod in the form of a minute-and-a-half long video with Edith Piaf singing C’est L’amour (It’s Love) in the background.

‘To love and be loved. That’s happiness,’ JLo wrote in the caption.

‘You all make my heart so full and I love you so much. Happy Valentines Day! Macho, you make all my biggest dreams come true!!!!’ 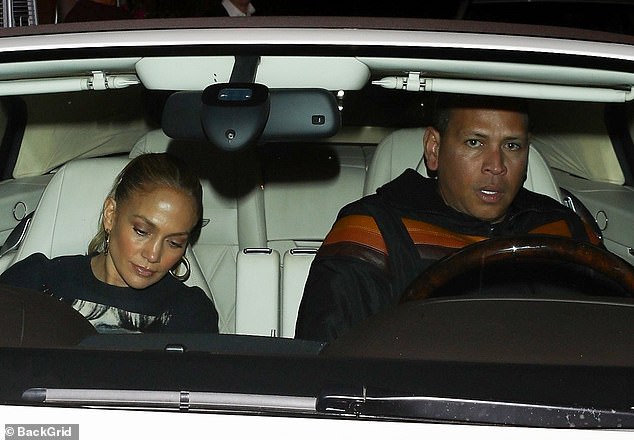 On the go: The couple were also spotted on their way to their Valentine’s Day dinner 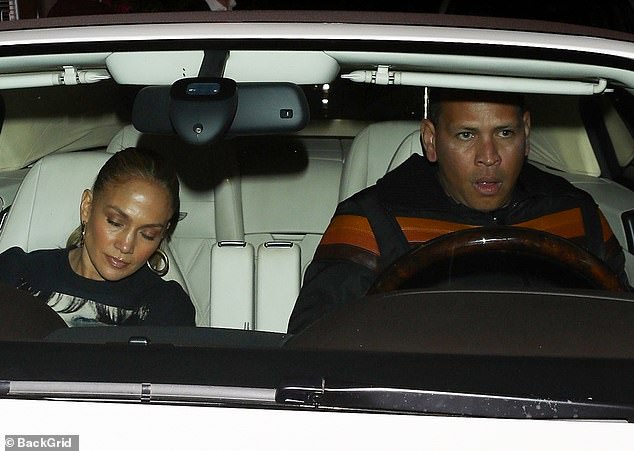 Behind the wheel: The former New York Yankee great took over the driving duties during their romantic date night in Los Angeles

About an hour later, the former New York Yankee great shared a similar video that showed clips of the couple sharing some tender moments together.

‘Happy #ValentinesDay to the woman who makes me a better person, to my champion and superstar,’ he began in the caption.

‘Every day with you is a blessing and I’m so lucky. What a year it’s been already, and there’s so much more joy to come. I love you.’

The couple announced their engagement in March of 2019. 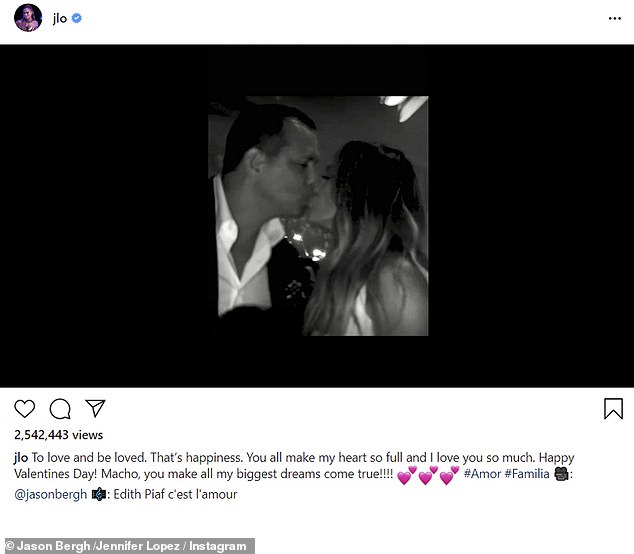 Serenade: Lopez took to Instagram to share her love for ARod in the form of a minute-and-a-half long video with Edith Piaf singing C’est L’amour (It’s Love) in the background 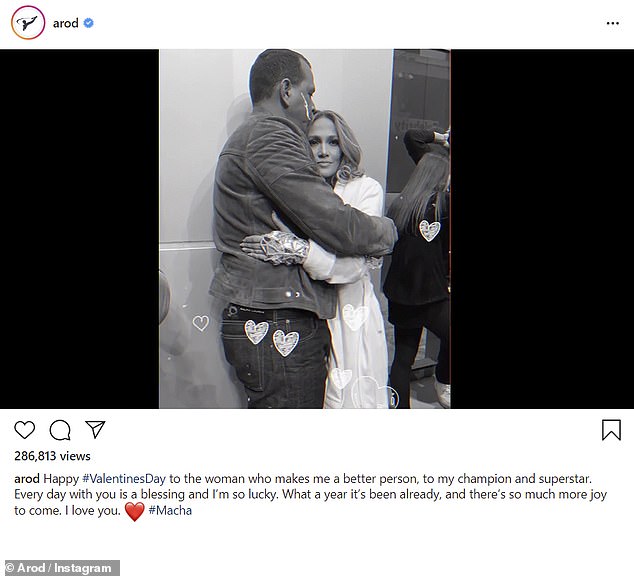