Former national security adviser John Bolton has added his voice to those denying claims that President Trump disparaged fallen American soldiers in France and said the trip was instead canceled due to bad weather – having initially punted on the claims.

It comes following a controversial report in The Atlantic last week that accused Trump of describing the Aisne-Marne American World War I cemetery in France, also knows as Belleau Wood, as being ‘filled with losers’ after he canceled a 2018 planned trip.

Bolton dismissed the claims as ‘simply false’ during an appearance on Fox News’ The Story on Monday – adding weight to White House denials given that he and Trump are now enemies.

The former national security adviser has come to Trump’s defense on the issue despite having been vocally critical of the President in the past and even writing a bombshell book, ‘The Room Where It Happened’, which painted Trump as incapable of handling foreign relations and only concerned with his re-election.

Bolton is the latest voice to cast doubt over the report in The Atlantic, after Veterans Affairs Secretary Robert Wilkie and former acting White House Chief of Staff Mick Mulvaney last week leaped to Trump’s defense saying the report was fabricated.

And the U.S. ambassador to France, Jamie McCourt also offered a denial telling Breitbart: ‘In my presence, POTUS has never denigrated any member of the U.S. military or anyone in service to our country.

‘And he certainly did not that day, either. Let me add, he was devastated to not be able to go to the cemetery at Belleau Wood. In fact, the next day, he attended and spoke at the ceremony in Suresnes in the pouring rain.’ 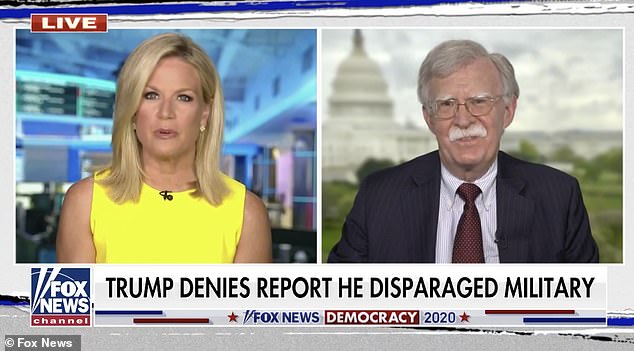 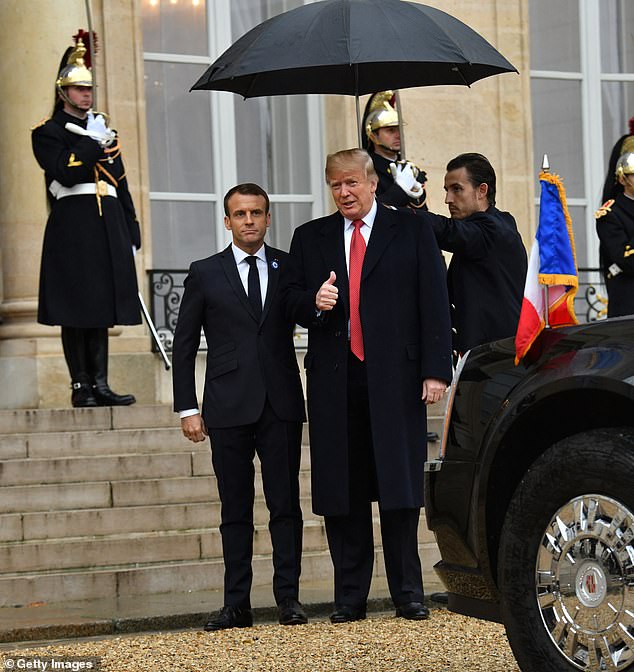 The French president pictured with Donald Trump during his visit to France in 2018, when the planned trip to a World War I cemetery was cancelled 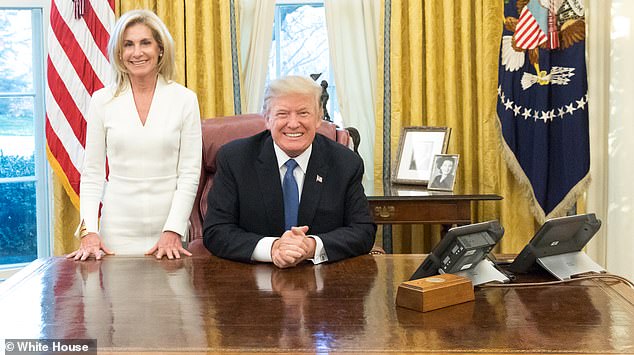 Backing: Ambassador to Paris Jamie McCourt was the latest to deny the Atlantic’s claims

‘According to what that article said, the president made disparaging remarks about soldiers and people buried in the cemetery in connection with the decision for him not to go to the ceremony that was planned that afternoon, and that was simply false,’ Bolton said during the interview.

‘I don’t know who told the author that, but that was false.’

He added that Trump had canceled the trip to the cemetery because of the weather rather than out of any disdain for the fallen soldiers.

‘The main issue was whether or not weather conditions permitted the president to go out to the cemetery,’ the former national security adviser claimed.

But he added: ‘The president has a habit of disparaging people whose name doesn’t end in Trump.’

Bolton’s denial was a change of tune for the former aide, who on Friday had told the New York Times:  ‘I didn’t hear that.

‘I’m not saying he didn’t say them later in the day or another time, but I was there for that discussion.’

The report, published by the Atlantic last week, credits four separate military sources and claims that Trump cancelled a visit to Aisne-Marne American Cemetery near Paris in November 2018 because he was worried his hair would be disheveled by the rain.

In a conversation with senior staff before the planned visit, Trump reportedly asked aides: ‘Why should I go to that cemetery? It’s filled with losers.’

During the same trip, the president allegedly later referred to the more than 1,800 Marines who lost their lives in the Battle of Belleau Wood in France as ‘suckers’ for getting killed. 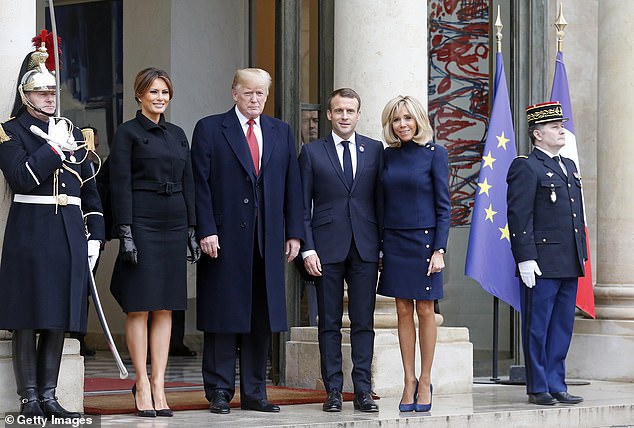 French President Emmanuel Macron and his wife Brigitte Macron with U.S. President Donald Trump and the first lady, Melania Trump, during their visit to the country in November 2018. Bolton claimed Trump had not visited the Aisne-Marne American Cemetery during the trip due to adverse weather conditions 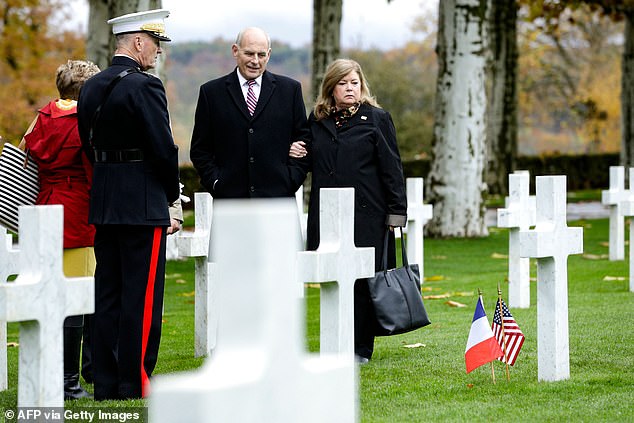 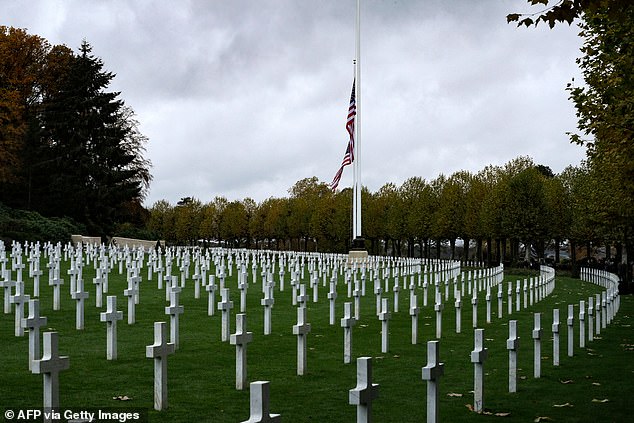 Tombs are pictured at the Aisne-Marne American Cemetery and Memorial in Belleau, on November 10, 2018

‘It’s a total lie. It’s fake news. It’s a disgrace, and frankly it’s a disgrace to your profession,’ Trump said, adding the trip was cancelled because of adverse weather conditions making it dangerous to travel by helicopter.

Veteran Affairs Secretary Robert Wilkie backed-up the president’s protests Sunday, saying he doesn’t believe Trump would make such remarks, based on what he’s seen for himself.

Wilkie discredited the claims to CNN‘s State of the Union on Sunday, saying the president described in the report by anonymous sources does not reflect the Donald Trump he knows.

‘I would be offended, too, if I thought it was true,’ Wilkie added. ‘I am very proud that this president has led to a renaissance in veterans affairs.’ 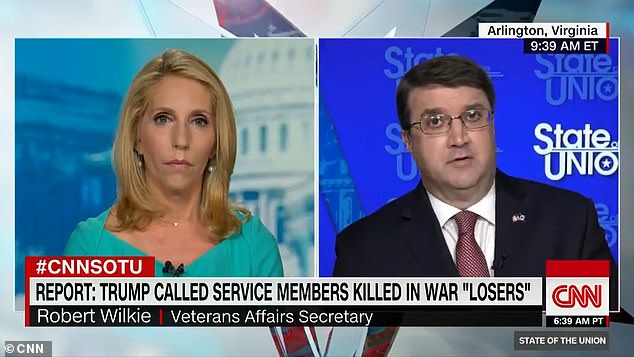 Veteran Affairs Secretary Robert Wilkie (right) joined a long list of officials in blasting a recent report in the Atlantic that claimed Trump has repeatedly made disparaging remarks about the US war dead, calling them ‘suckers’ and ‘losers’

He added that the Obama administration had a 37 percent approval rating among veterans in 2014 and 2015, compared to 90 percent for President Trump.

‘As you all can probably imagine, I have seen more than my share of outrageous (and false) attacks on the President over the last few years. But this whole injured soldiers thing really, really pushes the envelope,’ Mulvaney tweeted Friday.

‘I’ve never heard the President disparage our war dead or wounded. In fact, the exact opposite is true. I was with him at the 75th Anniversary of the D-Day invasion in Normandy. As we flew over the beaches by helicopter he was outwardly in awe of the accomplishments of the Allied Forces, and the sacrifices they paid.’ 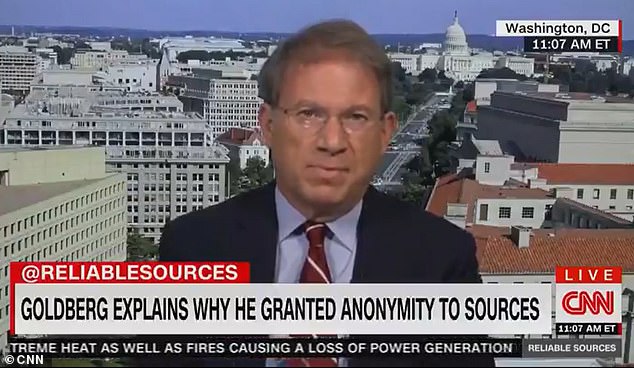 The rebuttals come as the article’s author, and the Atlantic’s editor-in-chief, Jeffrey Goldberg, has defended his decision to keep his sources anonymous and says he expects more information to come out in the coming days to corroborate his story about Trump’s remarks

The rebuttals come as the article’s author, and the Atlantic’s editor-in-chief, Jeffrey Goldberg, has defended his decision to keep his sources anonymous and says he expects ‘more information’ to come out in the coming days to corroborate his story about Trump’s remarks.

Goldberg said his decision to publish the article was made confidently, because of the number of sources he had, and their close ties to the president.

‘The formula is simple,’ he continued. ‘What you do is you have to say, does the public’s right to know or need to know a particular piece of information outweigh the morally complicated and ambiguous qualities of anonymous sourcing.

‘Most of us, most of the time, don’t rely on anonymous sourcing for most things because there are difficulties there. But in this climate, with information that we judge the voters to need, we are going to use anonymous sources because we think the public has a right to know. Especially when you have four or five or six sources, primary sources, corroborating sources, telling you the same thing.’