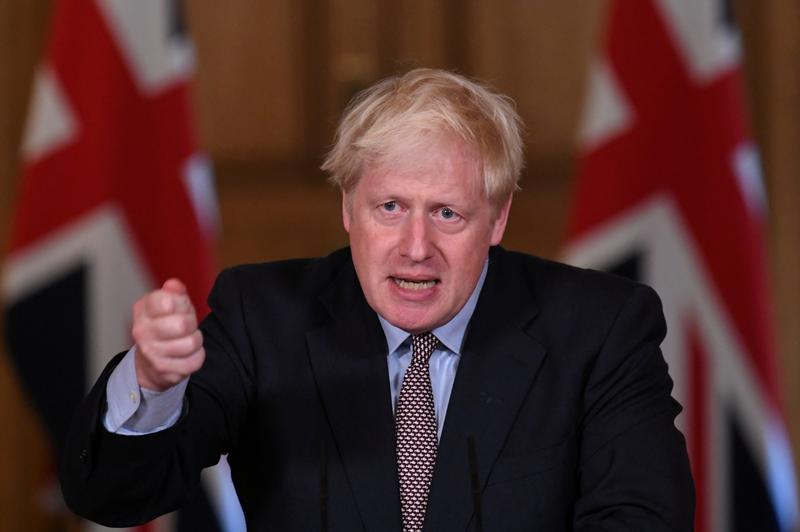 LONDON (Reuters) – British Prime Minister Boris Johnson lashed out at the European Union on Monday as he won initial approval for a plan to breach the Brexit treaty, saying the move was needed because the bloc had refused to take a “revolver off the table” in trade talks.

Johnson won the so-called second reading parliamentary vote on the Internal Market Bill 340 to 263. A wrecking amendment was defeated shortly beforehand, though more will follow as he faces a growing rebellion in his party.

The EU says Johnson’s bill would collapse trade talks and propel the United Kingdom towards a messy Brexit while former British leaders have warned that breaking the law is a step too far that undermines the country’s image.

Johnson, though, said it was essential to counter “absurd” threats from Brussels including that London put up trade barriers between Britain and Northern Ireland and impose a food blockade – steps he said threatened the United Kingdom’s unity.

“The EU still have not taken this revolver off the table,” Johnson told parliament before the vote. “What we cannot do now is tolerate a situation where our EU counterparts seriously believe that they have the power to break up our country.”

The EU has demanded Britain scrap the main parts of the bill by the end of September and that if not, there will be no trade deal at the end of the year to cover everything from car parts to food.

To back up its message, the European Commission has delayed a crucial decision on allowing London to continue clearing euro transactions for EU-based clients, a derivatives source told Reuters.

Johnson made clear that he would press ahead with the bill which he cast as a defensive insurance policy aimed at preventing a foreign power from dividing the United Kingdom by using Northern Ireland as leverage.

Many lawmakers, though, are disturbed by such an explicit bid to breach international law. All five of Britain’s living former prime ministers have expressed concern about his plan.

“I understand how some people will feel unease over the use of these powers and I share that sentiment myself,” Johnson said. “They are an insurance policy and if we reach agreement with our European friends, which I still believe is possible, they will never be invoked.”

But some EU diplomats believe London is playing a game of chicken, inviting the collapse of trade talks to either get the deal it wants or leave without a deal.

Now the bill has passed its second reading, it will face four more days of debate on its fine print – a stage at which lawmakers can try to insert revisions that could change the entire meaning of the bill, or even kill it.

The main battleground is likely to be an attempt by Bob Neill, a Conservative lawmaker, to amend the bill to ensure any attempt to use the clauses that breach the Brexit divorce agreement receive prior approval from parliament.