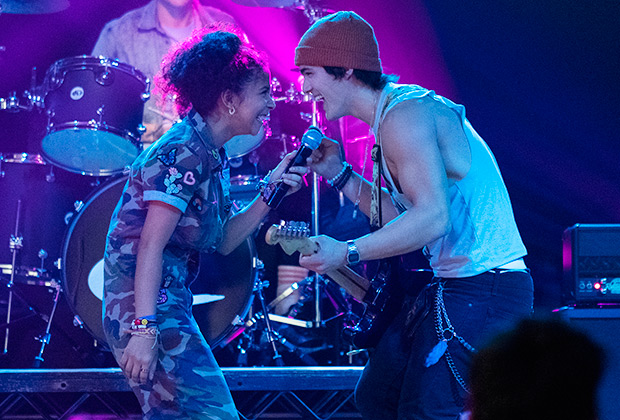 Spoiler alert: Three of the main characters from Netflix’s new musical comedy series die within the first 10 minutes of the premiere. And that’s when the fun begins.

Julie and the Phantoms, which dropped its nine-episode first season on Thursday, stars Charlie Gillespie (Charmed), Jeremy Shada (Adventure Time) and Owen Joyner (Knight Squad) as ‘90s teen rockers who meet their collective demise by ingesting some questionable hot dogs ahead of their biggest gig yet. But before their plaid-clad corpses even make it to the hospital, the show leaps ahead 25 years, introducing a young musician named Julie (talented newcomer Madison Reyes) with the ability to communicate with the ghostly trio.

“The reason we had the boys pass away from something as silly as hot dogs is that we just wanted to dive into comedy first,” showrunner Dan Cross tells TVLine, though he acknowledges that the show also deals with the seriousness of death, especially as Julie is still coming to terms with her own mother’s passing. “We knew we would have an emotional journey to tell with her, so we leaned into that.”

(Mild spoiler: Gillespie’s character eventually faces up to his death via a gut-punch of a musical number in Episode 6. As Cross’ fellow showrunner David Hoge notes, “It tears me apart every time. I always know it’s coming, but it still gets me.”)

Julie is initially the only person who can see the boys, but she soon discovers that by singing with them as her back-up band, she can make guys visible to the world again. It’s a game changer for the otherwise-unseen rockers, a phenomenon that Cross explains as “the power of music and the power of love” working their collective magic. It may be a far-fetched concept, but as Hoge wisely points out, “No one knows the truth about ghosts, so we can really do whatever we want.”

Speaking of the power of love, Julie and the Phantoms weaves multiple romantic stories throughout its first season, including one involving an openly gay member of the band. “We talked about it with [Kenny Ortega], and we all wanted to do it,” Hoge says of adding a same-sex couple to the mix. “We purposely address it in a very simple way. Dan and I are big believers of ‘do unto others’ and teaching by example. We’d like to think our shows have done that. If you can show a relationship on television that feels like the norm, maybe people will start to think of it as the norm. This is how it is. This is life, so get on board.”

Oh, did we forget to mention that Ortega is both an executive producer and a director? That probably explains why the whole thing feels like one long Disney Channel Original Movie — which is the highest of compliments, given the success of Ortega-directed franchises like High School Musical and Descendants. (Fans of the latter will likely appreciate seeing Booboo Stewart and Cheyenne Jackson, both of whom play key roles in the show’s first season.)

Let’s talk: How deep into your Julie and the Phantoms binge are you? Weigh in via our polls below, then drop a comment with your thoughts on Netflix’s new musical comedy. Are ghosts the new vampires?