One day out from the season premiere of Dancing With The Stars, celebrity participants were seen getting in some last minute rehearsals before the big day.

On Sunday a handful of the contestants were seen coming and going from the rehearsal space throughout the day, hoping to perfect their routines one last time.

Former Bachelorette Kaitlyn Bristowe, 35, was seen leaving the dance studio with a big grin on her face. 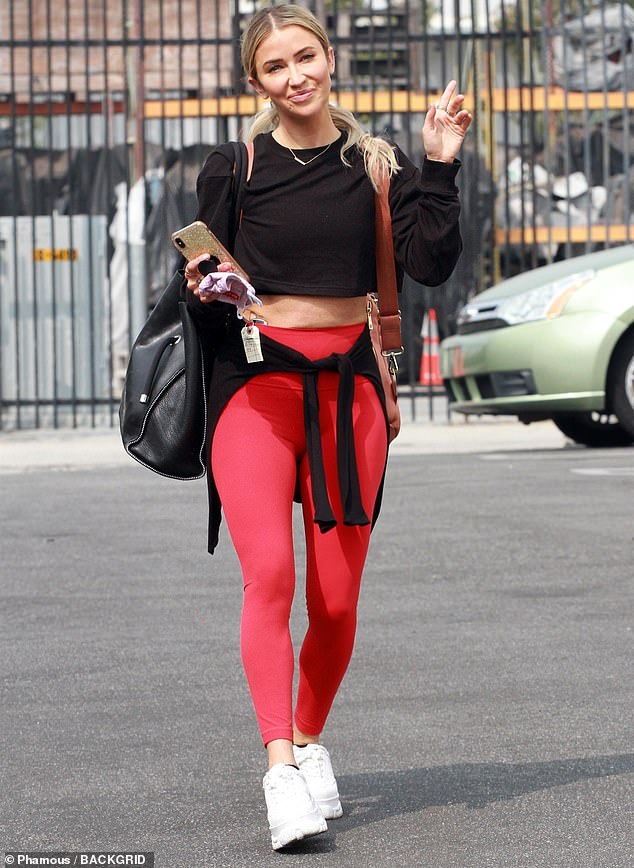 Crunch time: Kaitlyn Bristowe, 35, looked confident while leaving the dance studio one day ahead of the premiere of Dancing With The Stars

The Canadian born beauty, who moved to Vancouver on a dance scholarship, looked in high spirits as she smiled at the camera.

For her day of practice Kaitlyn wore a pair of fire engine red leggings with a black cropped long sleeve t-shirt that showed off her toned stomach.

Taking to social media Kaitlyn shared on her Instagram that she was sitting in her trailer awaiting her turn to do camera blocking with her dance partner.

She reveled in her excitement of seeing the stage for the first time telling her fans ‘I just can’t wait to dance.’  She then gave her followers a little tour of the stage as she twirled around. 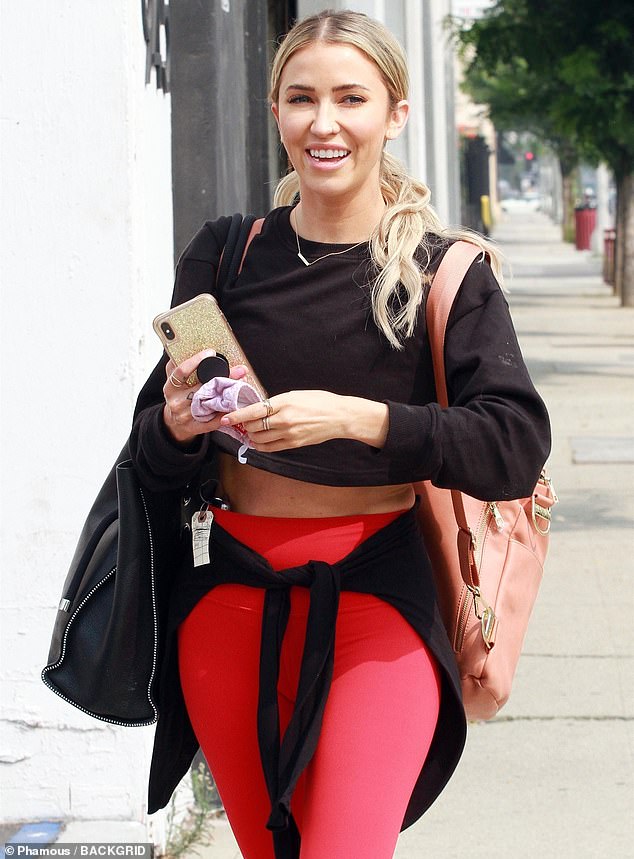 Red hot: For her day of practice Kaitlyn wore a pair of fire engine red leggings with a black cropped long sleeve t-shirt that showed off her toned stomach 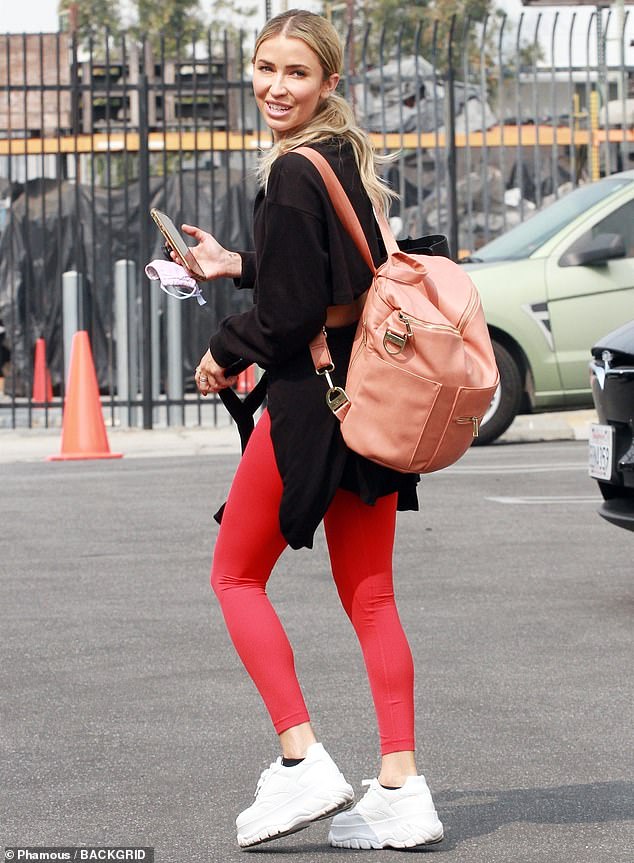 Look back: Kaitlyn showed off her tiny legs in the right pants as she carried a large salmon colored backpack

She threw a lightweight black wrap around her waist and a pair of white chunky sneakers as she flashed a waive at the camera.

Kaitlyn showed off her tiny legs in the right pants as she carried  a large salmon colored backpack.

Also in tow was an oversized black purse as the blonde kept her long blonde locks tied back in a ponytail.

She looked at ease as she walked back to car as she took her pink face mask off after making sure no one was around. 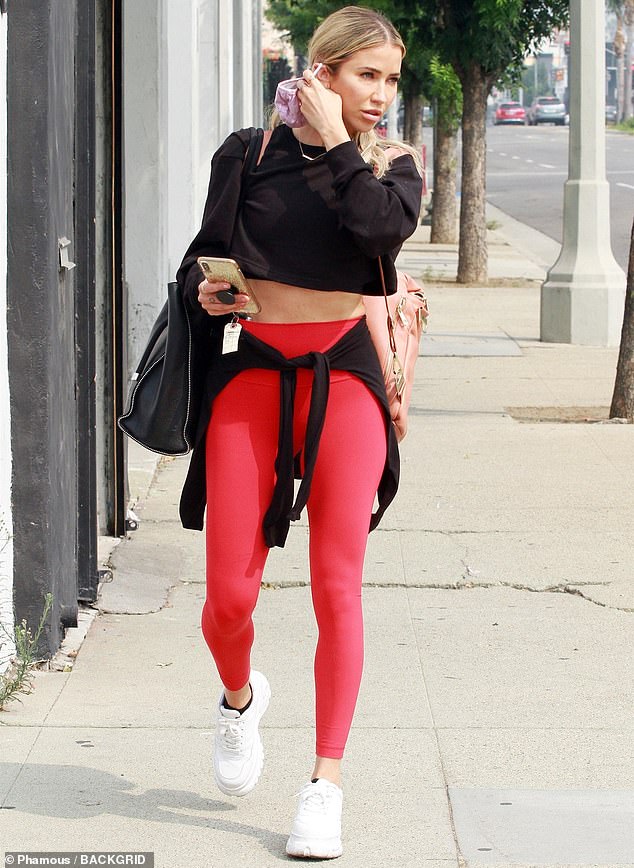 Mask off: Kaitlyn was seen taking her pink mask off as she walked to the car as no one else appeared to around 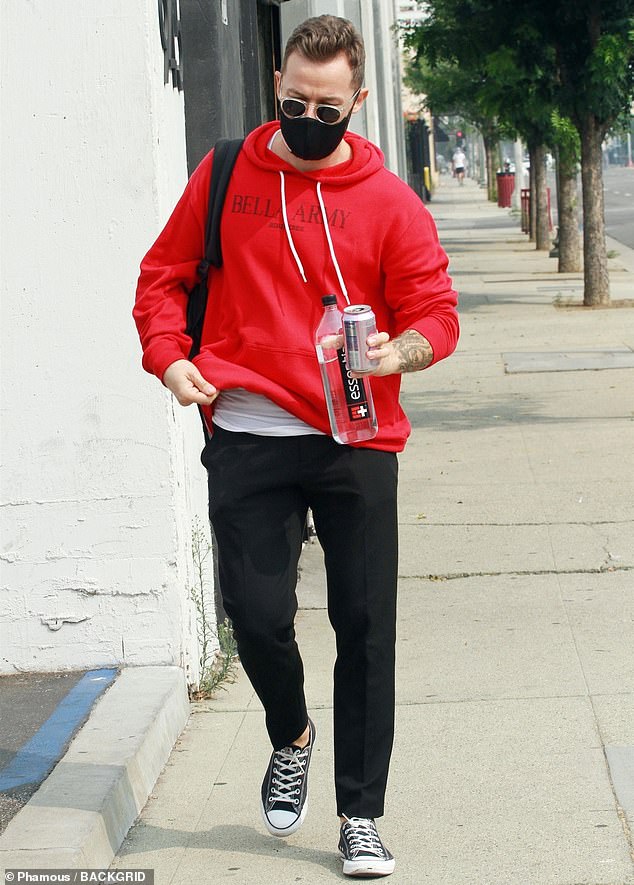 Bella army: Professional dancer Artem Chigvintsev, 38, was seen leaving behind his rumored partner Kaitlyn. The fiance of Nikki Bella repped his soon-to-be wife as he wore a sweatshirt with her name on it

Following shortly behind her was rumored partner Artem Chigvintsev, 38.

The new father to baby boy Matteo and fiance to Total Bellas star Nikki Bella, met his soon-to-be wife when they were partnered up on Season 25.

He paid tribute to Nikki as he wore a Bella Army hooded sweatshirt in red.

Artem cut a cool figure as he left the studio in tailored black pants and a pair of black converse. He adjusted his sweatshirt that was layered over a white t-shirt as he walked with his backpack full of stuff.

Rounding out the outfit was a pair of clear framed sunglasses and a black face mask as he double fisted water and a soda. 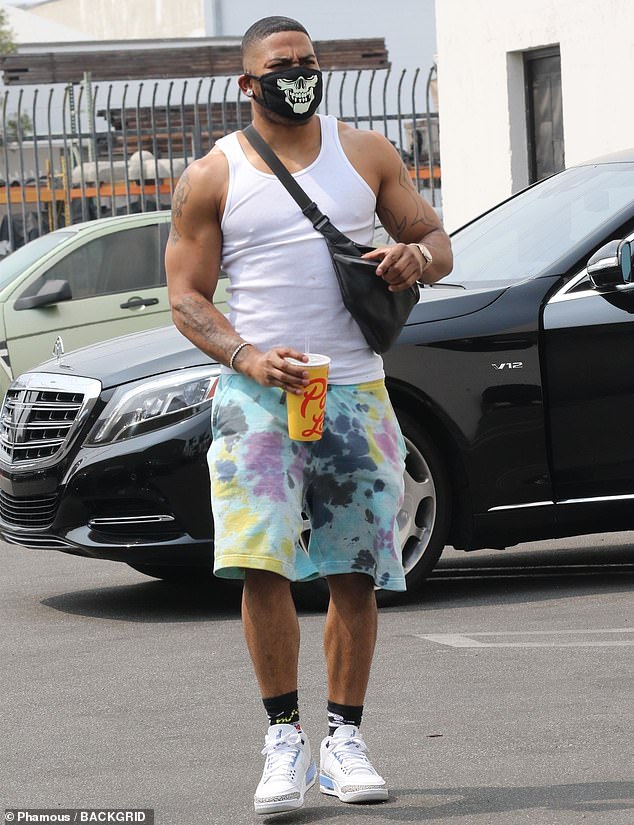 Hot in here: Nelly, 45 was seen arriving at the rehearsal space after grabbing a quick bite to eat at El Pollo Loco

Shortly thereafter rapper Nelly, 45, was seen taking his turn to bust some moves in the rehearsal space.

The Hot in Here singer was seen coming fresh from lunch at El Pollo Loco as he carried a soda with him.

Nelly looked effortlessly cool as he walked to the studio in tie-dye shorts and a white tank that he paired with a fresh set of Jordan sneakers.

He kept his face protected with a skull adorned black face mask and carried a satchel over his shoulder. 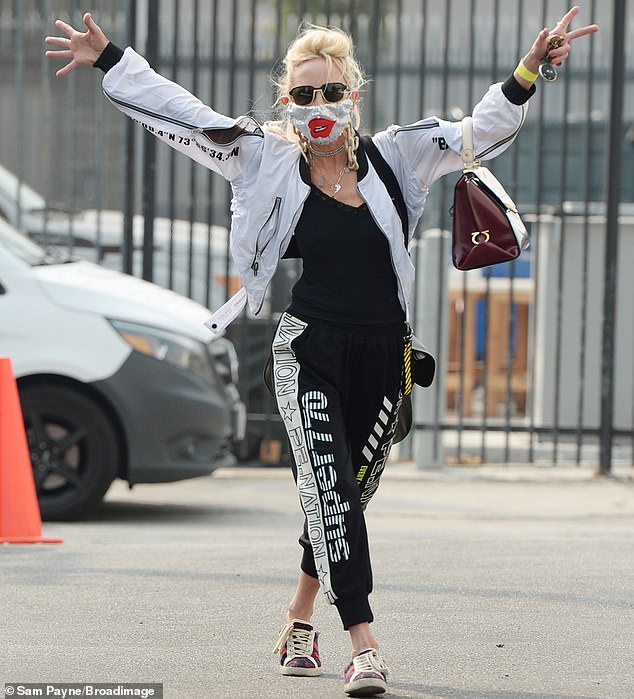 Enthusiastic: Anne looked in high spirits as she put on an enthusiastically animated display for the camera in a stylist outfit 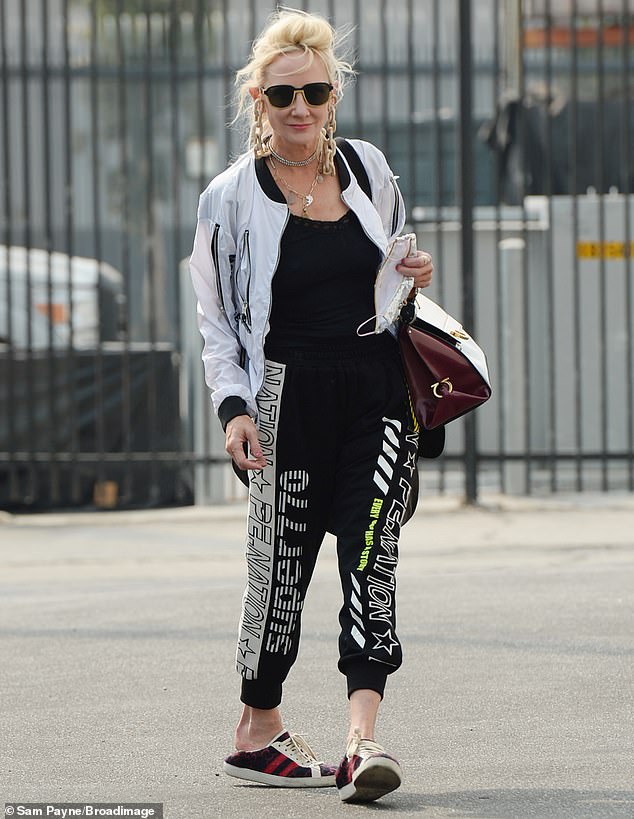 Platinum: She wore her platinum locks up in a messy bun as she walked to the rehearsal space with a smile on her face

On Saturday it appeared as if veteran actress Anne Heche, 51, injured herself ahead of the premiere.

But the next day Anne looked in high spirits as she put on an enthusiastically animated display for the camera in a stylish outfit.

Wearing a silver sparkly face mask with lips printed on it, she threw her hands up in excitement as she walked to the studio. 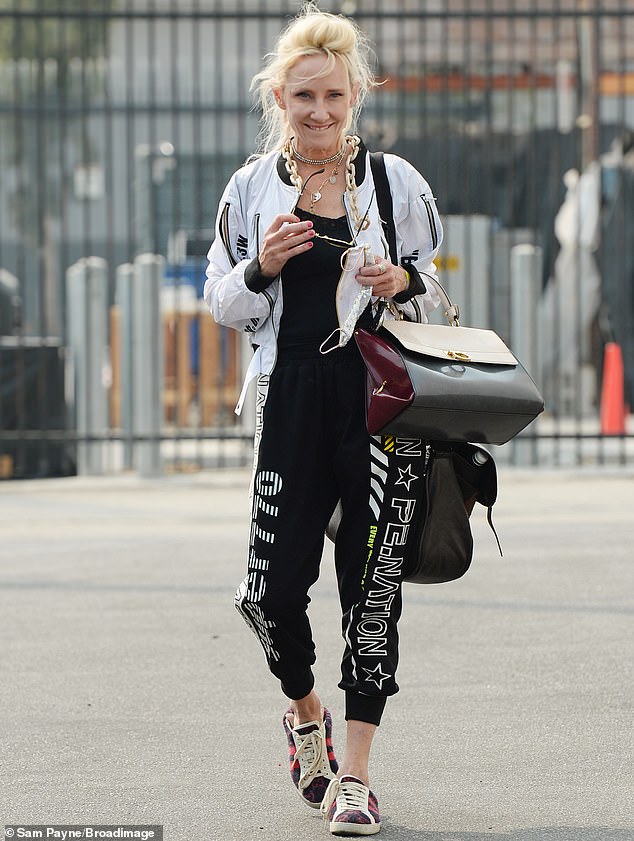 Quick trip: Not wanting to be late, she slipped her shoes on quickly not inserting her full foot into the shoes 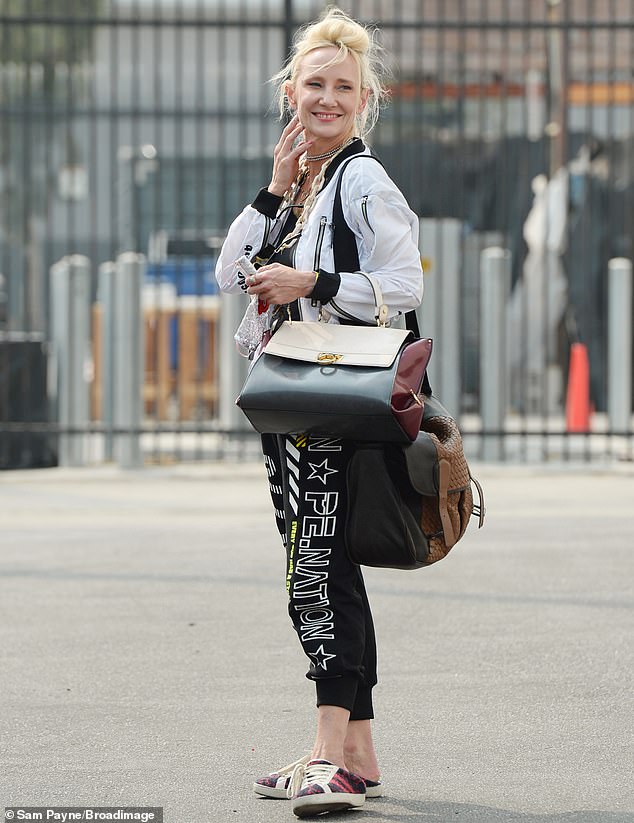 High spirits: Anne did not appear to be injured in Sunday’s photos though it is unknown what caused her to sport a bandaged knee yesterday and how sever the injury may be

She sported a black and white outfit, rocking sweats and a fitted tank that she topped off with a white bomber jacket.

Anne carried two oversized bags as she smiled in the parking lot as she looked giddy a day out from the show’s kick off.

Not wanting to be late, she slipped her shoes on quickly not inserting her full foot into the shoes. 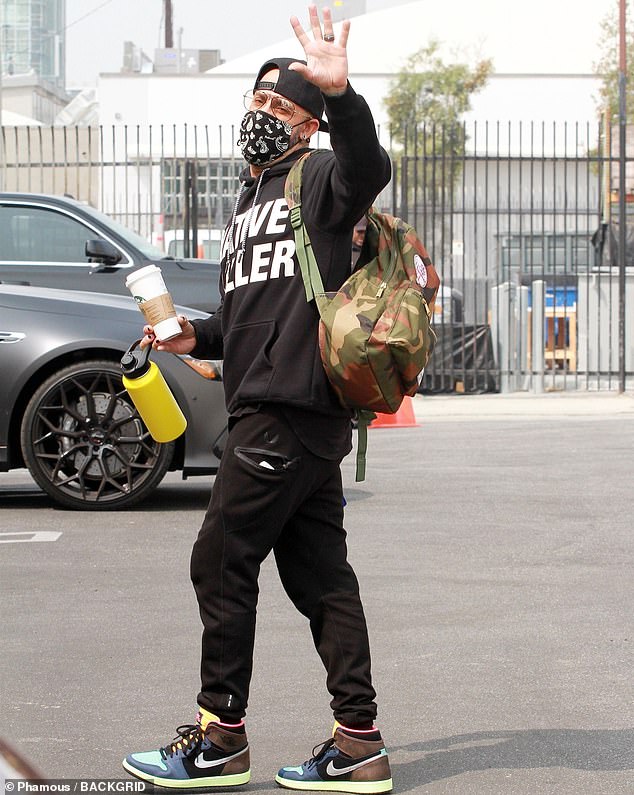 Backstreets back: Lord of nineties dance, former Backstreet Boy AJ McLean was seen leaving the studio in a fresh outfit as he geared up to show his moves on yet another stage 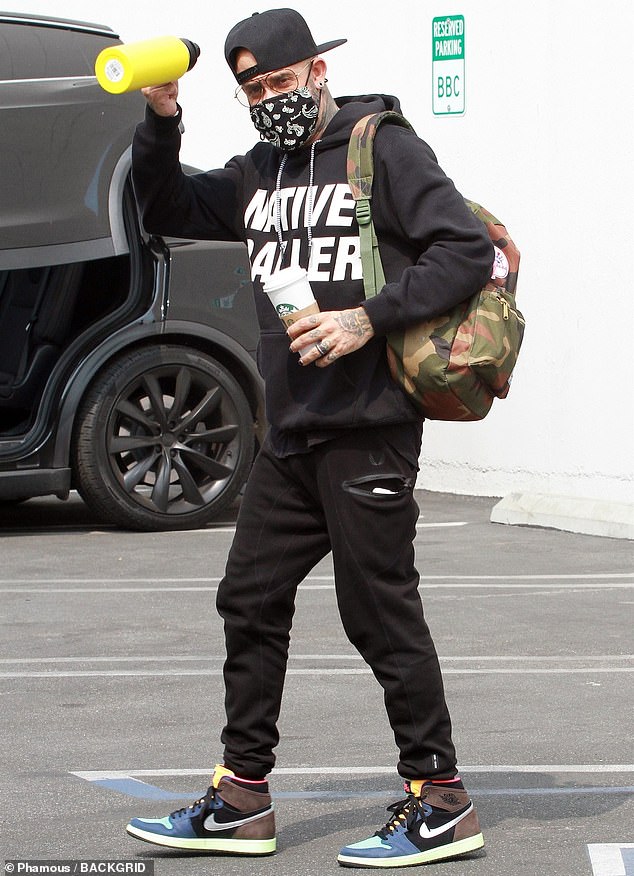 Hydration: AJ waived to the camera as he made sure to stay hydrated with coffee and water in tow

Carrying a cup of coffee and a bottle of water, AJ put on a cool display in a black sweatsuit with a ‘native baller’ sweatshirt and a black backwards cap.

He accessorized his outfit with a pair of colorful Nikes and a black bandana printed face mask as he walked with his camo printed backpack.

Netflix’s CHEER coach Monica Aldama, 47, was also all smiles as she arrived at the studio. 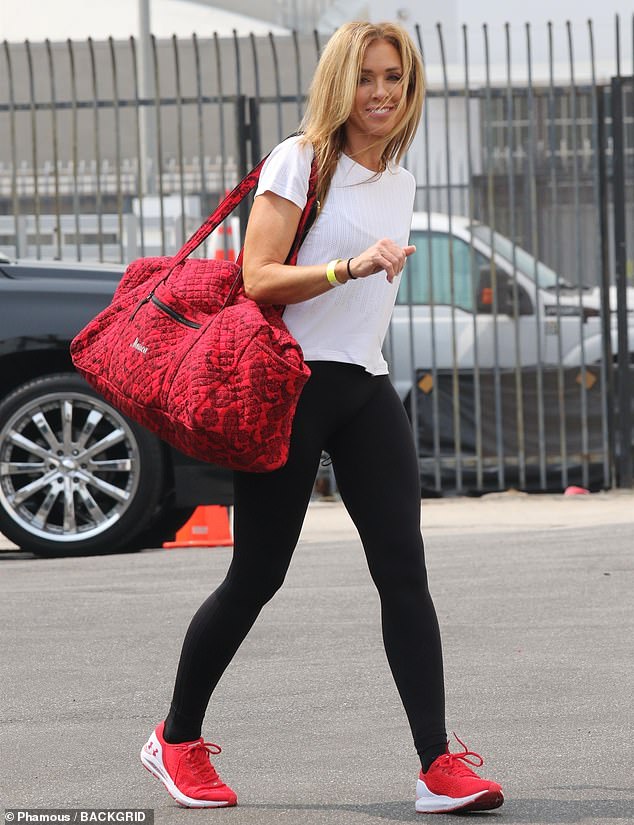 On a mission: Arriving at rehearsals, former cheerleader and Daytona champion definitely has a competitive side when it comes to dance competitions 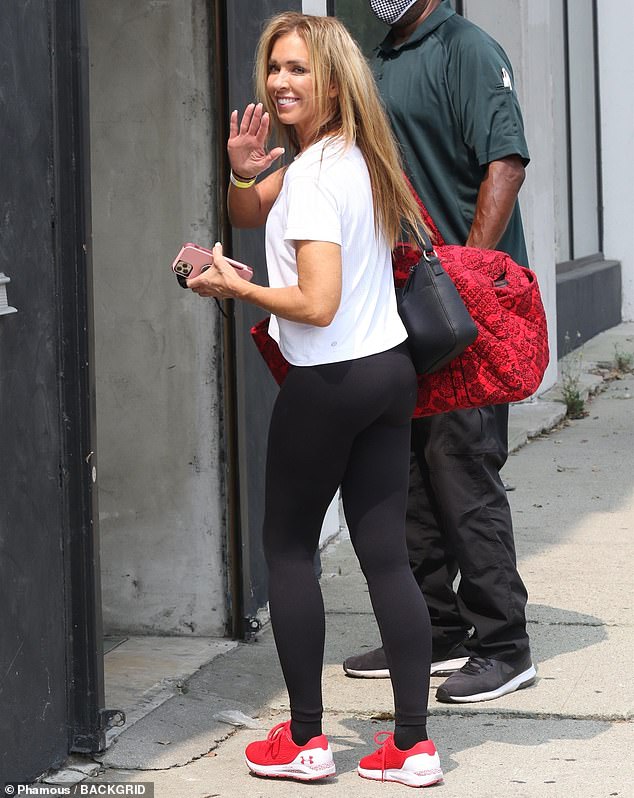 Big smiles: Monica flashed her big smile as she revealed on Instagram that thanks to the rigorous DWTS practices, her abs were starting to make a ‘comeback’

The former cheerleader and Daytona champion definitely has a competitive side when it comes to dance competitions and looked ready to leave it all on the floor.

Monica showed off her toned physique in tight black leggings and a white ribbed t-shirt as she wore red sneakers and carried a matching red bag.

She recently revealed on Instagram that thanks to the rigorous DWTS practices, her abs were starting to make a ‘comeback’.

Other contestants that will be seen taking to the floor on Monday the 14th are actor Jesse Metcalfe, host of The Real Jeannie Mai, Olympic figure skater Johnny Weir and Tiger King’s Carole Baskin.

The show is hosted by top model Tyra Banks and will be judged by dance veterans Derek Hough, Carrie Ann Inaba and Bruno Tonioli. Season 29 premieres Monday at 8p/ET on ABC. 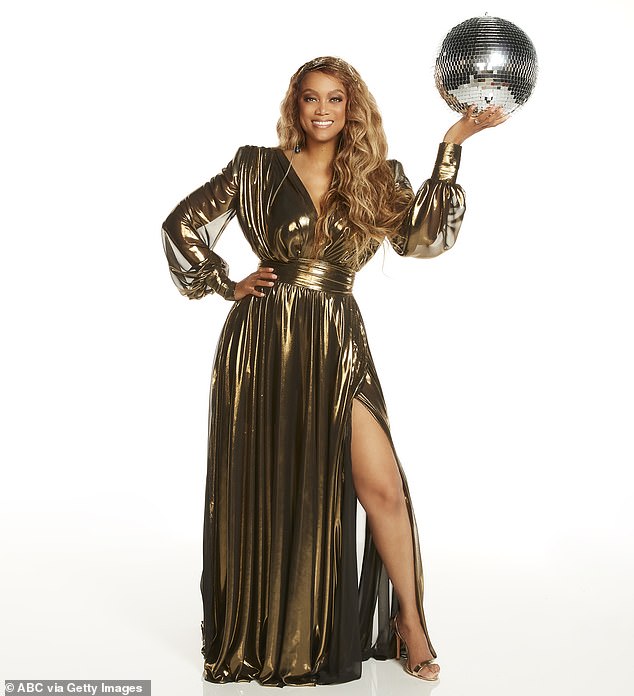 Tyra’s world: This year the show will be hosted by model Tyra Banks as Season 29 kicks off Monday September 14th at 8PM ET on ABC.