What to watch next

Unlike the rest of the cast of Dancing With the Stars season 29, Kaitlyn Bristowe has had ample time to prepare.

The former Bachelorette has been vocal about wanting to be a part of the ABC reality show for a long time, and she was finally offered her chance earlier this year when Chris Harrison revealed the news during her episode of The Bachelor: The Greatest Seasons—Ever! In other words, she spent at least two months as the only confirmed cast member. That extra time might just give her a leg up on the competition since she’s been using it to work out and get stronger in preparation for a season of dancing.

In an exclusive interview with E! News, she opened up about how she hopes Dancing With the Stars is the motivation she needed to get herself in the shape she wants to be in before she starts a family with boyfriend Jason Tartick, especially after the coronavirus pandemic has had her lounging on the couch a bit more than usual.

Meet the Cast of Dancing With the Stars Season 29

“I always said like when I’m getting to that point, you know like, when I’m a year out from having a family or two years, I really want to feel like I’m in the best shape of my life, to feel strong and to go into a healthy pregnancy,” she told E! “With quarantine, everyone’s just horizontal, watching TV and just going through their own transition of ‘What is life,’ and I think everyone kind of went into like a mode of ‘Okay, well I can sleep in or I can lay on the couch and I can do whatever.'”


Or at least that’s what Kaitlyn herself was going through.

“I just wasn’t feeling my best,” she said. “My anxiety was coming back, depression was starting to hit because of obviously what’s happening in the world. Then I got news of going to pursue a dream of mine and I was like, ‘this is like the kick in the butt I needed to get myself in gear, in shape, to just feel so strong. So I started immediately and it definitely has paid off over the last 15 weeks.”

That said, she’s not giving up too many of life’s little pleasures as she prepares for the season.

“Anything I do in life, I always want to work hard, play hard and so I’m still drinking my wine, I’m still eating my McDonald’s on Sundays, but I am working hard through the week,” she said.

At the time of this interview in mid August, Kaitlyn did not know who else was joining the cast. Now, it’s been revealed that she’s up against athletes like Johnny Weir, Vernon Davis, Charles Oakley and Cheer coach Monica Aldama, as well as Chrishell Stause, Carole Baskin, Anne Heche, Jesse Metcalfe, AJ McLean, Nelly, Nev Schulman, Skai Jackson, Justina Machado, and Jeannie Mai.

Kaitlyn didn’t know if any of her competitors had gotten the same amount of time that she got, but she isn’t assuming she has any kind of advantage, even with her dance background.

“I just wanted to go into this like as humble as possible because I don’t want to be like ‘Well I grew up a dancer, so I’m going to crush this,'” she said. “Yeah, I grew up doing ballet and jazz and tap, but I stopped at the age of 25, and I’ve never stepped foot in a ballroom. I’m terrified.”

The 35-year-old isn’t just getting ready to dance and then start a family. She’s also working on a new collab with Tayshia Adams for her scrunchie company, Dew Edit, and she’s got a new release coming from her wine label Spade and Sparrows. She’s also releasing a song she wrote for Jason that’s coming out this month, so she’s a busy lady!

Read on for more from our interview with Kaitlyn.


E! News: You recently started sharing your fitness journey on Instagram. What inspired you to change your workouts?

Kaitlyn Bristowe: I am so not one to share body pictures, not that I have anything against them, it’s more just like I’ve never gotten into that. This is so different for me because I’m just so proud of all the hard work I’ve been putting in. Honestly, it’s crazy because I was like not in terrible shape and you know, would bend every here and there, and I eat healthy. And then I talked to one of my friends who is a trainer and he was like, ‘we gotta lift weights and we have to get you strong’ and I was like, I really want to be strong going into this, mentally and physically, and so I started lifting like pretty heavy weights.

E!: How have the new workouts been going?

My trainer laughed at me because the next day after our first session I said to them, ‘I’m injured, I actually can’t come in, I can’t walk, like I’ve done something to my back’ and he said ‘Kaitlyn, welcome to deadlifting.’ Definitely at 35, my body is not what it used to be. I’ve been lifting weights three times a week and then on Tuesdays and Thursdays, I’ve been doing personal training with boxing in the ring and then doing boxing classes. My other friend who owns the gym here in Nashville has been doing circuit training with me on my off days.

Other than that, I’ve been doing physical therapy, which has actually helped me a lot. She helped me with balance, and growing up being a dancer, I always thought I could stay balanced but that just changes with age. She has me put on these sport goggles that football players put on where they’re like strobe lights and I have to stand on one foot and catch the cross ball she is throwing at me. I’ve been just doing everything that I possibly can to benefit my body and endurance because it’s such a dream come true for me that I just want to work as hard as I can to go as far as I can.

Did You Know These Dancing With the Stars Relationships Happened Off the Show?

E!: Have you had to adjust your eating habits?

KB: I always eat pretty healthy. I worked with this girl named Massy Fit. To be honest, I’ve been just eating way more than I’m used to. So, definitely more carbs, more protein, which is hard for me because I’m a pescatarian. Sundays are my day I just go like headfirst to McDonald’s.

E!: What are you looking forward to most on your dream job, Dancing With the Stars?

KB: Honestly the thought of being in a dance studio for hours on end just brings so much happiness to my soul. I’ve loved and been so passionate about dance since I was three years old, and it’s really what I wanted to do as a career. I really feel like I gave up on my dream at 25. Now, I just feel like this is like my second chance to just do something I love and succeed in it and so it’s honestly just so like lame of an answer, but I’m just so excited to dance.

E!: What are you nervous about?

I’m scared I don’t know how to ballroom dance. I talked to [Hannah Brown] and she was like unlearn everything you know about dancing because this is just so different and so hard.


E!: What other tips or advice has Hannah given you?

KB: She gives me so much advice. I send her voice notes all the time asking her questions. Her advice is always like, “Enjoy the craziness of it because obviously it’s a once in a lifetime experience.” You go through so many highs and lows and ups and downs, so just like enjoy the whole ride and and just get rest where wherever you can.

E!: What do you think is going to be your biggest challenge going on the show?

KB: The whole thing. I think it’s going be letting somebody else lead me in when it comes to dancing and like moving. I feel like I’m going have a hard time with somebody telling me what to do. I feel like I might need to take a backseat and that might be hard for me to do. I have to leave it up to the professionals. They know what they’re doing.

E! Who would be a dream partner for you to be paired with?

KB: Well, I always joke—he isn’t on the show anymore, but Derek Hough is obviously a dream. I have a picture of me and him from when I just came off The Bachelorette and they were announcing the cast on Good Morning America. I swear I’ve had like four vivid dreams where I have been on Dancing with the Stars with him so I’m like, I know I’m a little creepy. I just respect his talents so much. I will truly be so happy with whoever they partner me with. I look at numbers, like Val [Chmerkovskiy] has won the most mirrorballs, so wouldn’t be mad at him as a partner.


E!: How excited is Jason to come and watch you dance?

KB: Oh my gosh, he’s so thrilled. He’s just signed two book deals. I know he has so much going on and he’ll be able to put his head down and do a lot of work while I’m dancing, and he’s just so supportive, so excited for me to dance.

E!: Some fans were a little disappointed when they thought Jason was going to propose and instead Chris Harrison asked you to do DWTS. When is that actually going to happen?

KB: I said to him, “If they ask you to propose to me after they air my season, like please don’t because then it would have been like Nick [Viall] proposes to me, I say no. Shawn [Booth] proposes, I say yes, but it doesn’t work out, And then let’s cut to Kaitlyn and Jason.” Covid and quarantine has kind of put a damper on plans. Jason’s resourceful and I know he’ll figure out a way to do something, but I just know he wants to like sit down with my parents in person and spend the time with them before he even asked me, so who knows.

E!: You always talk about wanting kids. Is there a chance of a baby before a ring?

KB: Yes! I’m telling you, I’m going into Dancing With The Stars being like ‘Okay this is my last hurrah,’ because I’m ready to have babies.

E!: You just did a collab with Tayshia for Dew Edit! Did you give her Bachelorette advice?

KB: No, because it was like so out of left field. I had given Clare [Crawley] advice, thinking she was going to be the one the whole way., Yeah so crazy. I mean I’m all for it, especially if Clare found her person and she is happy. I’m thrilled about it. Why not let somebody else get an opportunity? I wanted Tayshia to be the Bachelorette before, so I am thrilled about that. I was actually supposed to go out there to do a date with Clare and then they called me and they’re like, ‘We’re going to different creative direction’, and then when I heard this news I was like, “Oh yeah, that’s totally different.'”

You can see Kaitlyn show off her dancing skills when Dancing With the Stars premieres Monday, Sept. 14 on ABC.

Gallery: It’d Be a Big Mistake to Not Check Out These 30 Pretty Woman Secrets⁠—Huge! (E!) 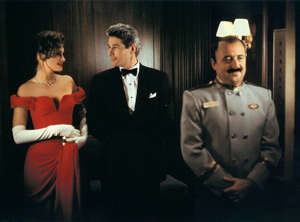