“I don’t know how people go through that without having some kind of outlet because it is the worst thing ever for everyone involved.”

Kelly Clarkson says her life has been a “little bit of a dumpster” the past few months.

During a virtual appearance on “Sunday Today with Willie Geist,” the singer gave an update on how she’s been doing since she filed for divorce from Brandon Blackstock, her husband of seven years, back in June.

“I’ve been talking to friends that have been through divorce,” Clarkson continued. “I don’t know how people go through that without having some kind of outlet because it is the worst thing ever for everyone involved.”

On June 4, Clarkson filed for divorce from Blackstock, 43, after seven years of marriage, citing “irreconcilable differences,” according to court documents. The Grammy winner is requesting joint legal and physical custody of their children, daughter River, 6, and son, Remington, 4. (Clarkson also helped raise Blackstock’s teenage children from a previous relationship: Savannah, 18, and Seth, 13.)

During her chat with Geist on Sunday, “The Voice” coach revealed how she found out she had won.

“I totally forgot that the Emmys were on,” she recalled. “I’m sitting there playing with Legos with my kid. My executive producer Alex calls me and is, like, ‘You are the best host.’ And I was, like, ‘Thank you.’ I was having kind of a hard week, and I literally almost started crying, because I was like, ‘This is just the nicest thing to call someone out of nowhere and just be kind.’ And she was, like, ‘No, no, no, no. You won the Emmy for outstanding…’ and I was, like, ‘What?!'” 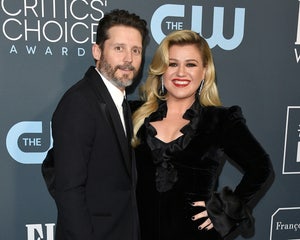 Kelly Clarkson Wins Emmy, Thanks Estranged Husband for ‘Convincing’ Her to Do Show

Following her win, the “Since U Been Gone” singer took to Twitter to celebrate. Clarkson also gave a sweet shoutout to Blackstock, who is also her manager and supported the launch of the daytime talk show in September 2019.

“Thank you so much to @BBlackstock for believing in me & convincing me to do @KellyClarksonTV show,” she tweeted at the time.

While speaking with the Los Angeles Times earlier this month, Clarkson said she only plans to talk about her divorce on Season 2 of her show if it just happens to come up in an organic way.

“I am a very open person, but I’m not going to be able to be truly open about this in certain aspects because there’s kids involved,” she explained. “I think that I will navigate a way in which to be open and honest about it eventually, probably via the show, and it’ll probably, I’m assuming, happen organically when someone says something in conversation or something. It definitely wouldn’t be planned.”

“But my children and his older children — there are a lot of little hearts involved in this and while people feel, ‘Oh my gosh, what a loss …’ imagine how it is in the epicenter of the storm,” she continued. “It’s a lot to process and deal with, just as a family. So because it’s not just me, I probably won’t go too deep with it.”

Got a story or a tip for us? Email TooFab editors at [email protected].