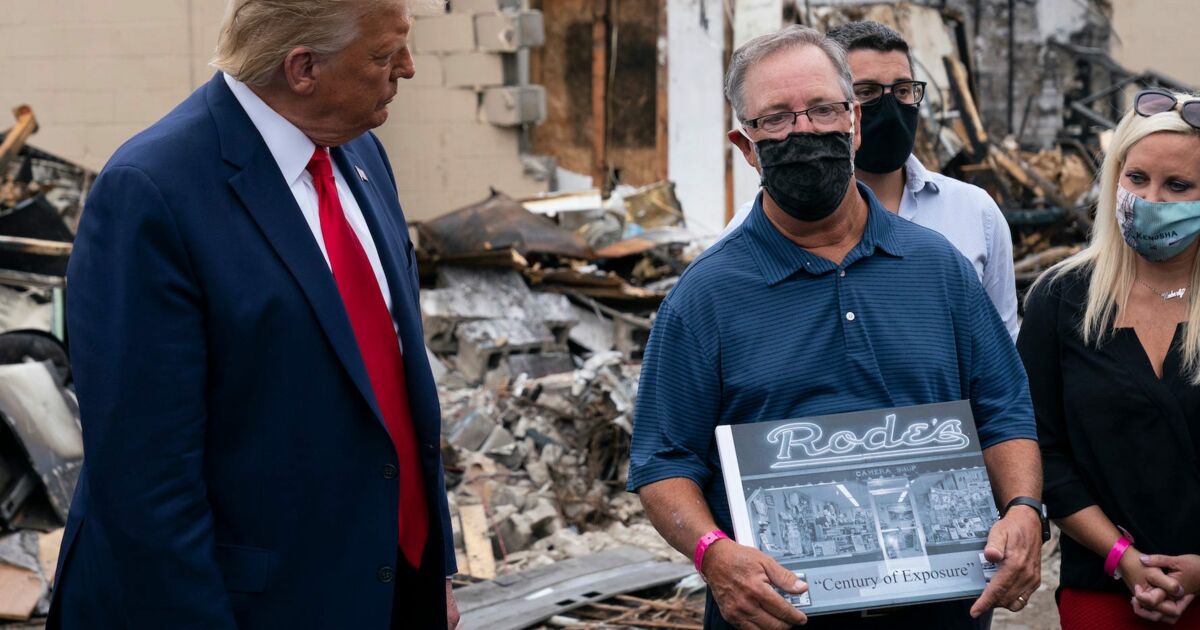 Standing next to him was a man the White House, and president, identified as the owner of the destroyed store, John Rode III.

But another man, Tom Gram, told the local outlet TMJ4 that he’s actually owned the 109-year-old store for eight years — and had declined to join Trump’s photo op.

Gram is accusing Trump of using his shop for political gain and replacing him with the shop’s former owner.

“I think everything he does turns into a circus, and I just didn’t want to be involved in it,” Gram told TMJ4.

The store, which opened in 1911, was destroyed last week, Kenosha News reported. The storefront windows were smashed, and the building was looted and set on fire.

TMJ4 reported that Rode did still own the property the shop was located on.

Gram told TMJ4 that neither Trump nor Rode should have used his destroyed business for a political message.

“I think he needs to bring this country together rather than divide it,” Gram said.

During the tour, Rode praised Trump’s response to the protests in the city.

“I just appreciate President Trump coming today — everybody here does,” Rode said. “We’re so thankful we got the federal troops here. Once they got here things did calm down quite a bit.”

Trump said: “A day earlier would have saved his store.”

Trump added that governors and mayors needed to call for federal help when protests erupted. Last week, after Gov. Tony Evers already deployed the National Guard in Kenosha, Trump said the governor should activate them.

“Governor should call in the National Guard in Wisconsin,” Trump tweeted last Tuesday, a day after the Guard was already activated. “It is ready, willing, and more than able. End problem FAST!”

The Guard was activated to mounting protests after Blake, a 29-year-old Black man, was shot seven times by a white police officer last Sunday. Blake is now paralyzed from the waist down.

Evers also wrote a letter to Trump asking him to “reconsider” his decision to visit Kenosha amid the protests and said his presence could hinder the state’s healing.

Gram and the White House didn’t immediately respond to requests for comment from Business Insider. Contact information for Rode couldn’t be located.