Lady Amelia Windsor showcased her quirky casual style today as she wrapped up warm in a huge puffer coat for a stroll through the capital.

The granddaughter of the Queen’s cousin, 24, cut a relaxed casual figure as she walked through the streets of west London armed with a hot drink in her hand today.

Amelia, who is 39th in line to the throne teamed her oversized grey coat with a pair of leopard print leggings, teamed with flat brown ankle boots as she braved the winter chill.

The model recently touched back down on home turf after stunning the crowds at Paris Fashion Week last month.

Lady Amelia Windsor, 24, who is 39th in the line of succession to the British throne, braved the winter chill to took a stroll through the streets of west London today

The socialite teamed her ensemble with a white bag slung over her shoulder and a Amazon Prime package tucked under her elbow.

Lady Amelia accessorised her look with a pair of gold stud earrings and a simple beaded bracelet on her wrist.

Letting her blonde locks cascade down her shoulders and rest gently inside her hood, the royal completed her look with a pair of faded brown ankle boots.

Lady Amelia, who graduated with a degree in Italian and French from the University of Edinburgh earlier this year, is the granddaughter of the Duke of Kent.

After leaving university, the royal has juggled modelling work, fashion collaborations and writing for works such as Tatler Magazine. 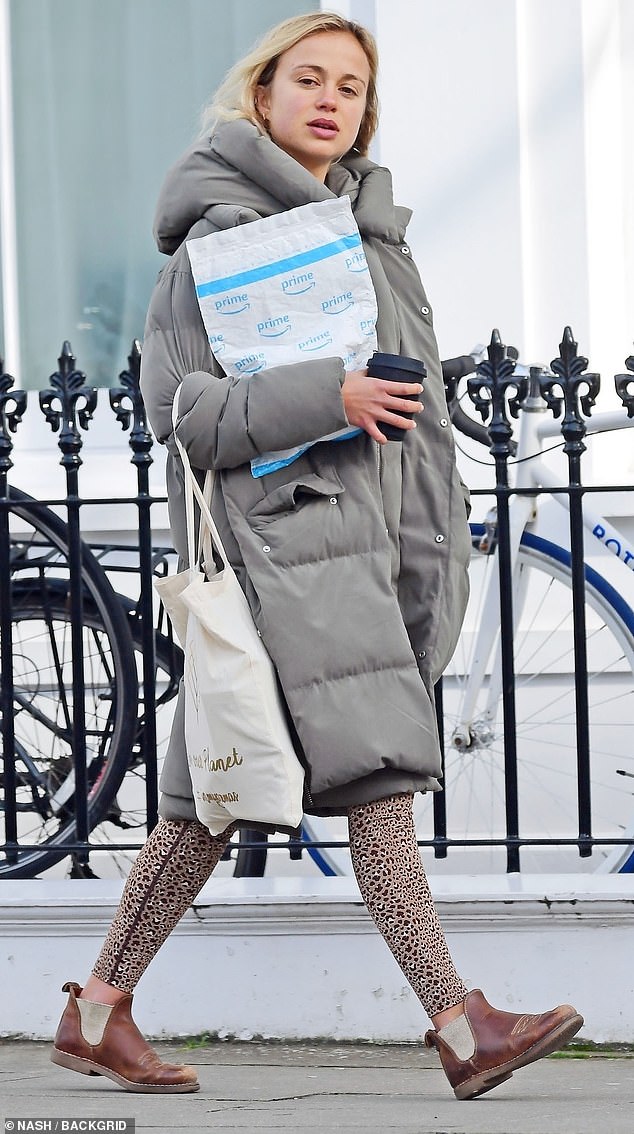 In 2019, it was announced that the Tatler Contributing Editor would be collaborating with the London-based jewellery store Tada & Toy to launch a new eight piece collection of earrings.

The jewellery store was creation of friends Tansy Aspinall and Victoria Van Holthe who embarked on their designing journey after learning they both shared an interest in jewellery while at school together.

Lady Amelia, who has more than 82,000 followers on Instagram, recently spoke about the how she found social media platform could get ‘quite toxic’ if you followed it too much and instead preferred to start her day by reading a book.

Speaking to The Telegraph she said: ‘I begin the day by reading a book, instead of actually looking at my phone.

‘I think it can get quite toxic if you follow likes too much.’