A Network Rail report into the Stonehaven train crash disaster found that landslips caused by heavy rainfall will continue to affect Britain’s railway lines because it is not ‘economically viable’ to strengthen them.

Network Rail’s interim report confirmed that the ScotRail train ‘struck a pile of washed-out stone covering the line’ causing it to derail in the devastating crash that killed three people on August 12 at Carmont, near Stonehaven in Aberdeenshire.

Heavy rainfall that washed material onto the track – a ‘significant contributing factor’ to the tragedy – was aided by a steep, sloped area to the side of the initial derailment point.

The report highlighted that sloped ground commonly seen beside British train tracks – known as earthworks – were often built more than 150 years ago. 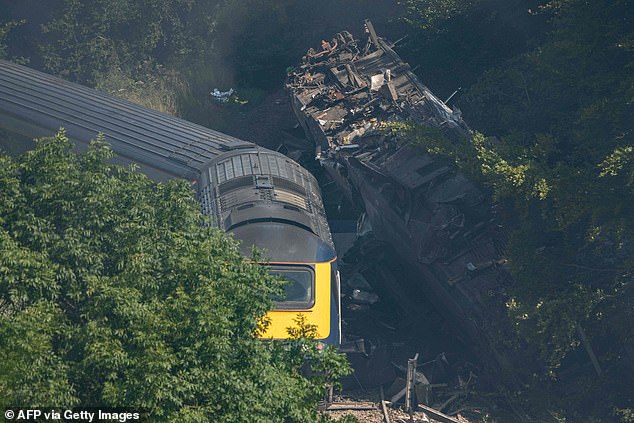 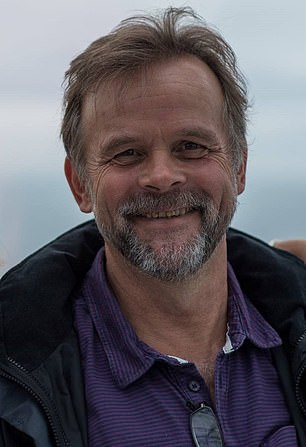 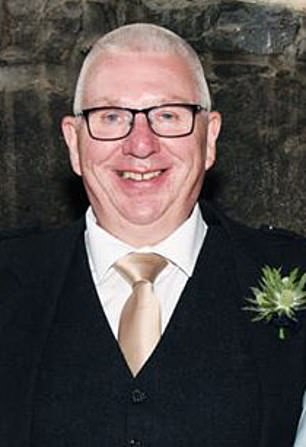 Train driver Brett McCullough, 45, died alongside conductor Donald Dinnie (right) and passenger Christopher Stuchbury, 62, (left) when the train slipped from the tracks in an area hit by major flooding 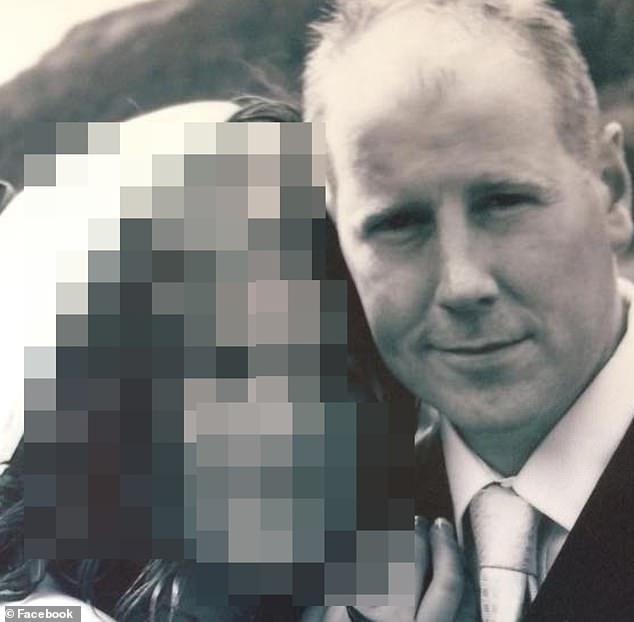 Train driver Brett McCullough (pictured), 45, tragically died when a ScotRail passenger service slipped from the tracks  near Stonehaven in Aberdeenshire 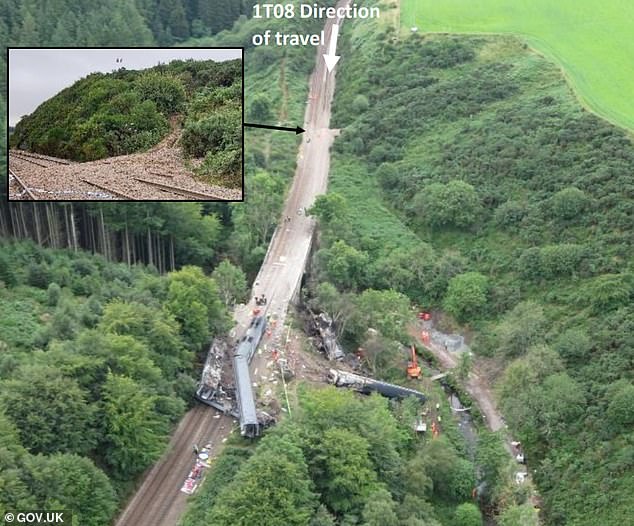 Heavy rainfall that washed material onto the track – a ‘significant contributing factor’ to the tragedy (pictured) – was aided by a steep, sloped area to the side of the initial derailment point 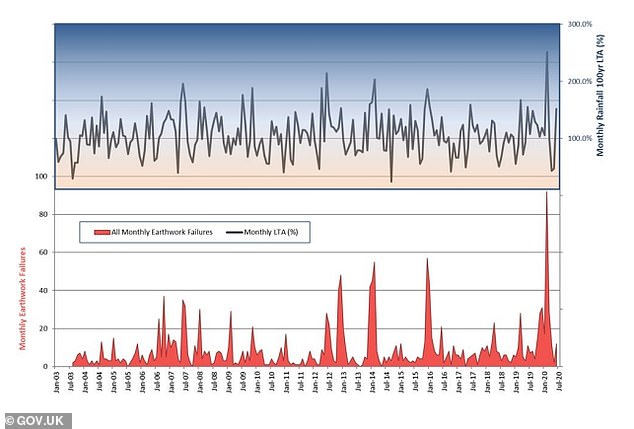 The report – commissioned by Transport Secretary Grant Shapps – found that more than 50mm of rain fell in the Carmont area between 5am and 9am alone. This graph shows monthly rainfall in relation to the number of earthwork – sloped ground commonly seen beside British train tracks – failures

The report was commissioned by Transport Secretary Grant Shapps, who tweeted about its release

A minute’s silence has been held ahead of the recovery of the first carriage from the site of the fatal train crash near Stonehaven.

Workers at the site and members of the emergency services took part in the minute’s silence on Thursday morning.

A 600-tonne crawler crane is being used to lift the derailed carriages from the railway line.

Network Rail and contractors had to prepare the hard-to-access site before the train could be recovered.

Preparations have included building a new 900-metre road and temporary bridges over the line, to allow access for specialist equipment.

The recovery of the carriages is expected to take several days.

Once the carriages have been removed from the site, engineers will be able to assess the extent of repairs required to the tracks and bridge damaged in the derailment.

Scotland’s Transport Secretary Michael Matheson has said he does not expect the line to reopen to passengers before October.

It states that it is ‘not economically viable to strengthen all sub-standard infrastructure slopes’ so there will likely ‘still be earthwork failures as a result of challenging weather’.

Train driver Brett McCullough, 45, died alongside conductor Donald Dinnie and passenger Christopher Stuchbury, 62, when the train slipped from the tracks in an area hit by major flooding.

The report – commissioned by Transport Secretary Grant Shapps – found that more than 50mm of rain fell in the Carmont area between 5am and 9am alone.

To put that in context, Aberdeen’s gets an average of 65.3mm per month.

The report also highlights that last month was likely to be one of the wettest Augusts ever recorded in Scotland.

The downpour caused water to rush in – aided by a steep, sloped area to the side of the initial derailment point – and wash stones onto the track after a previous train passed through on the same line.

Just two and a half hours after the earlier train went by – shortly before 9.40am – the Aberdeen to Glasgow Queen Street train rounded a left-hand curve and hit a pile of washed-out stone covering the line.

The front part of the train was derailed and – after striking a bridge parapet – the whole train came off the track.

Network Rail said it inspected 584 sites which share some of the characteristics of the location of the Stonehaven crash.

No significant issues ‘requiring emergency intervention’ were found, although defects that have ‘deteriorated and require action sooner than originally planned’ were identified at ‘around 1 per cent of the sites’.

While the interim report highlighted that Network rail is ’embracing technology’ and is ‘working with academia’ to understand the affects of climate change on train lines – the report said it is ‘not economically viable to strengthen all sub-standard infrastructure slopes’.

It went on: ‘Despite continuing improvement, we expect there will still be earthwork failures as a result of challenging weather.

‘What we can and will do is continue to evolve our application of technology and refine our operational procedures to manage their safety impact and protect our passengers, colleagues and members of the public.’ 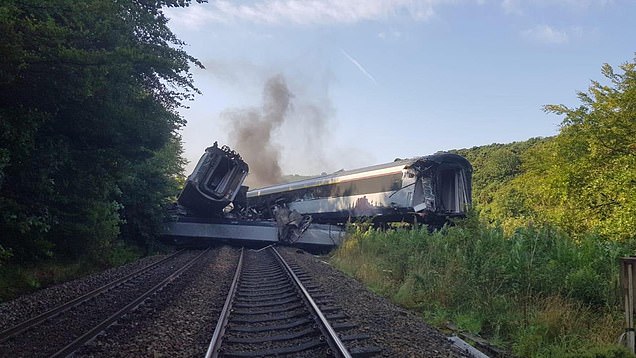 The downpour caused water to rush in – aided by a steep, sloped area to the side of the initial derailment point – and wash stones onto the track after a previous train passed through on the same line

How the Stonehaven train tragedy unfolded

6.38am: Despite heavy rain overnight in the area, the train left Aberdeen station as normal, bound for Glasgow Queen Street.

6.53am: The train calls at Stonehaven station as normal, before departing and heading south.

Between 6.53am and 9.40am: After leaving Stonehaven, the train continued south, before encountering a landslip, caused by torrential rain.

It began to return north to Stonehaven, initially remaining on the southbound line before crossing at Carmont onto the northbound line. It then hit a second landslip and derailed while returning to Stonehaven.

9.40am: First reports of the incident were received by Police Scotland at 9.40am, but it is unclear if there was a delay between the derailment and it being reported.

There remains a gap of several hours between the train leaving Stonehaven and the derailment being reported to police.

9.49am: Network Rail Scotland reports that a landslip on the same line at Carmont means that services are no longer running in the area.

Addressing the Stonehaven train crash, the document highlights drains installed in 2010 and owned by Network Rail as well as pre-existing field drains.

It is unclear how the new and old drains interact. Site investigations are currently underway to understand how the storm water came to wash out the stone.

The report assesses the management of thousands of miles of sloped ground beside railway tracks and sets out plans to reduce the risk of landslips.

Mr Shapps said: ‘We owe it to those who lost their lives, were injured, and were affected by this incident, to learn and act on every possible lesson to ensure this is never repeated.

‘The independent investigation will enable us to understand exactly what went wrong, and make sure it does not happen again.

‘We cannot delay learning the lessons. That is why I immediately commissioned this report and am making the interim findings available. I welcome the work setting out the challenges in adapting our rail infrastructure to cope with increasing extreme weather events caused by climate change. The task is now to overcome those challenges.

‘We will use the findings of this interim report to improve, shape and accelerate our work to build a more robust and resilient rail network, so that our railway continues to be one of the safest in the world.’

Network Rail said it has introduced emergency changes to the way signallers should act in severe weather, following reports of increased water levels near tracks and when there are concerns about unstable ground due to heavy rain.

These include stopping all trains until lines have been inspected by a competent engineer.

They must also report all conditions to the operations control centre and act upon the instructions given.