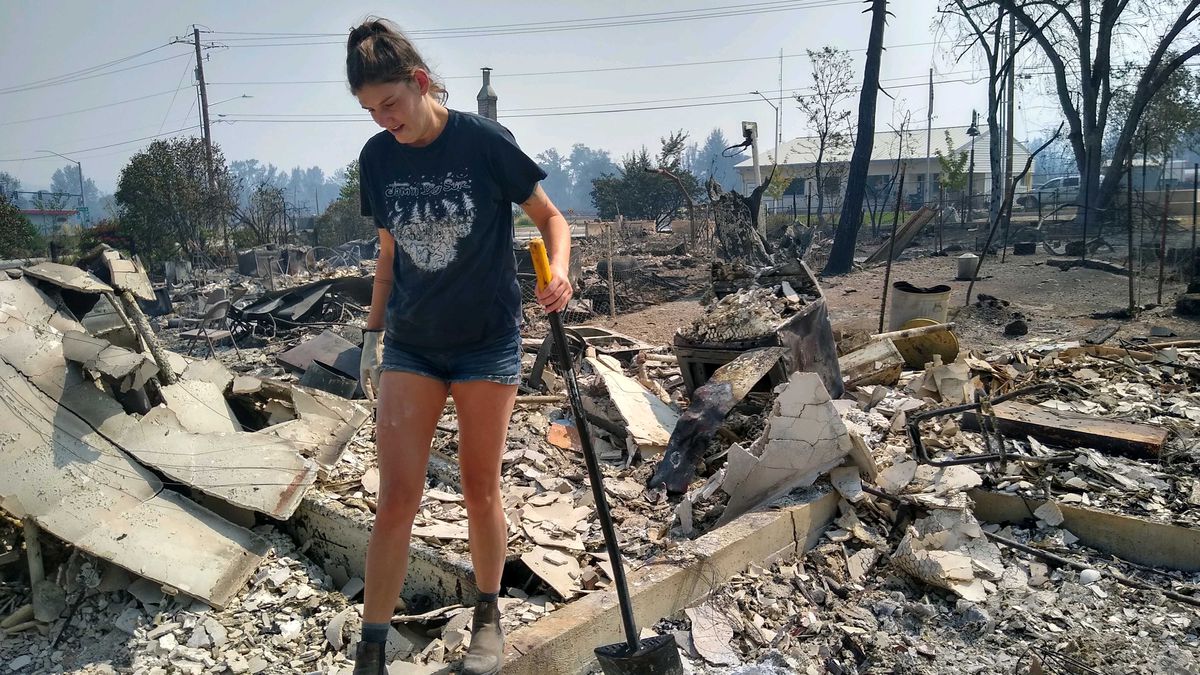 For days, enormous wildfires have consumed Oregon’s landscape up and down the west side of the state. Officials count more than a million acres burned and tens of thousands of people forced to leave their homes. At least nine people have died, and countless homes and businesses have been scorched.

Even as dry, hot weather that fueled the fires earlier in the week appears to be moderating across much of Oregon, wildfire smoke lingers on, bringing hazardous air and posting breathing risks for vulnerable people. Officials shared promising updates Sunday afternoon as they eased evacuation restrictions in parts of Clackamas County. Meanwhile, Southern Oregon faced an ongoing fire threat as forecasts called for high winds that could fuel and spread current conflagrations.

Once the fog lifted, firefighter said they would be working around the perimeter of the fire. In the latest updates, officials said the Beachie Creek Fire east of Salem and the Riverside Fire east of the Portland metro area remain about one mile apart.

“Despite the rumors, a merger of the two fires is not imminent,” the update said.

Officials said it was still possible the fires could come together, but, based on the current weather patterns, the merger “would not result in dynamic fire behavior” as seen in the last week.

Evacuation status is being dropped from Level 1 “Be Ready” to normal for a large area of western Clackamas County.

A newly-revised fire-evacuation map shows that the threat of fire has dropped for the Portland-area bedroom communities of Milwaukie, Gladstone, Happy Valley, Clackamas, West Linn, Lake Oswego, Tualatin and Wilsonville. The downgrade also applies to some areas near Boring and Damascus.

Evacuation levels remain unchanged for those areas in the county under Level 3 “Go!” or Level 2 “Be Set.”

Forecasters are warning that wildfires could spread significantly Sunday in Southern Oregon, with gusty winds of up to 40 miles-per-hour expected to exacerbate conditions.

The National Weather Service in Medford issued a Red Flag Warning early Sunday, citing dry weather and strong winds expected to blow through the region later in the day. The weather service predicted the wind and humidity will “likely contribute to a significant spread of new and existing fires.”

The warning is in effect 11 a.m.-9 p.m. Sunday for the Obenchain and Almeda fires, as well as in parts of the Fremont-Winema and Rogue River/Siskiyou national forests and across the state line into Northern California.

Officials on Friday said more than 1 million acres had burned in a matter of days. Dozens of people remain unaccounted for in parts of the state, and at least nine deaths had been confirmed due to the wildfires by late Saturday.

Air quality off the charts across much of the region

Portland’s air quality is so hazardous, it’s off the charts, according to the EPA’S AirNow.gov website.

Any air quality index above 300 is considered hazardous. Anything greater than 500 is off the index.

Portland is holding down first place in the rankings of major cities with the worst air quality in the world. Smaller and cities towns in Oregon are faring even worse as clouds of smoke continue to blow through the region. On Sunday morning, residents in Madras and Roseburg were breathing in air considered more dangerous than Portland’s, with index values of 543 and 577 respectively.

An air quality advisory remains in effect until noon Monday for all of for all of southwest Washington and northwest Oregon.

Dense fog rolled in this morning across a large swath of the state Sunday morning, reducing visibility even further along the North Oregon Coast, Central Willamette Valley, Lower Columbia and Greater Portland Metro Area. The National Weather Service is warning of dangerous driving conditions with poor visibility in some areas reduced to one-quarter mile.

Number of missing from Almeda fire down to one

Authorities say nearly everybody listed as missing from a wildfire in southern Oregon have been accounted for, according to the Associated Press.

Authorities earlier this week said as many as 50 people could be missing from the Almeda Fire in the Ashland area. They now say the number of people unaccounted for is down to one.

The Jackson County Sheriff’s Office said in a statement they expect this number could fluctuate. Officials have said more people are missing from other fires and the number of fatalities is likely to rise.

Most calls did not result in any charge.

“The vast majority were determined to be non-criminal in nature,” the statement read.

Between Sept. 8-10, the office said deputies responded to approximately 330 calls in the county’s areas under a Level 2 “Be Ready” and Level 3 “Go Now” evacuation order. They said it was a 405% increase over the calls they fielded two days prior. Few led to arrests.

The sheriff’s office said there were 10 arrests made from Sept. 5-10.

Firefighters have made progress on the Holiday Farm Fire Saturday, which has so far burned 156,700 acres in Lane County. As of 9 p.m. Saturday, the fire’s containment was reported by authorities at 5% for the first time. There has so far been one reported death associated with the fire.

Lionshead Fire, measured at 138,700 acres, is also estimated to be 5% contained. The Archie Creek fire in Douglas County is now 10% contained and has burned an estimated 116,000 acres.

The Two Four Two Fire in Klamath County was 10% contained as of Sunday morning. According to the latest report, it has destroyed eight homes and 27 structures.

The Almeda Fire, which destroyed an estimated 600 homes as it tore through the towns of Phoenix and Talent earlier in the week, is now listed as 60% contained. It has burned 5,700 acres and is responsible for at least four deaths.

The Beachie Creek Fire and the Riverside Fire are still 0% contained. The Riverside Fire, which has consumed nearly 134,000 acres, remains on the edge of the city of Estacada in Clackamas County. On Saturday, firefighters said they were able to create a line around spot fires on the west side of the blaze to secure the areas near Estacada and Molalla.

“Crews are also working on the north end of the fire above the North Fork Reservoir and looking at opportunities to move towards the east,” read a Sunday morning update on the fire.

The Beachie Creek Fire was listed Sunday morning as having burned 188,600 acres.

Coronavirus had already complicated the way school was set to look and function this fall for Oregonians. Coupled with the pandemic, the danger of wildfire driving thousands of Oregonians from their homes has caused multiple K-12 school districts to delay the start of classes.

Brent Barry, superintendent of the Phoenix-Talent School District in Southern Oregon, said more than half of the district’s families had been displaced or lost their homes due to the Almeda Fire that ripped through the area Tuesday.

“At this point we are connecting with every one of our families to find out the immediate and urgent needs of students and family members to make sure everyone is safe, that they have their basic needs met as far as shelter and food and things that they need just to feel comfortable just moving on from this which will take months and years really,” Barry said.

Because so many teachers and students are displaced, and because parts of Phoenix and Talent are still under Level 3 evacuation orders, the district decided to delay the start of the school year further.

In a fire briefing Saturday afternoon, Clackamas County Fire asked residents to conserve water usage while firefighters continued to work on a number of large fires there that threatened lives and property.

Capt. Brandon Paxton, the fire department’s public information officer, said firefighters have had success managing fires as weather became cooler and less windy late in the week. But he warned county residents that they need every resource available to manage three large fires they are in charge of managing — which had burned an estimated 5,000 acres in the county as of Saturday afternoon.

“Please don’t turn on your water. We’re at risk of a serious water shortage,” Paxton said. “There’s a very real potential for that. We want to make sure that isn’t the case.”

He added that smoky conditions have made it challenging for firefighters to see exactly where fires are burning and to deploy air resources. Paxton said fire staff have not yet been able to assess how many structures have been lost in the fires, but they hoped to have more information in the coming days and weeks as the weather continues to be favorable to firefighting.

“That’s what’s driving this whole scene: Mother Nature,” Paxton said. “We are at the mercy of that, and really taking the time to evaluate those weather conditions.”

The Oregon State Police announced Saturday that it has appointed a new state fire marshal, even as more than 1 million acres burned in the state.

“Mariana is assuming this position as Oregon is in an unprecedented crisis which demands an urgent response,” OSP Superintendent Travis Hampton said in a statement. “This response and the circumstances necessitated a leadership change. I have the absolute confidence in Mariana to lead OSFM operations through this critical time. She is tested, trusted and respected — having the rare combination of technical aptitude in field operations and administration.”

Shortly after the announced change, Walker offered to resign his post, and Hampton accepted that resignation, effective immediately.

The Marion County Sheriff’s Office announced Saturday that some towns threatened by the Beachie Creek Fire could downgrade from Level 2 to Level 1 evacuation status.

“In addition, the Army Corps of Engineers has been in communications with us and we’re working on determining when and where we can get the boats out of the lake, for those folks that have boats on Detroit Lake,” Sheriff Joe Kast said in a statement.