Drones, robots and self-driving cars could dodge accidents in future thanks to a new sensor inspired by the collision avoidance neurons of swarming locusts.

Flying locusts travel in swarms of millions at 2–3 miles an hour — but are capable of making evasive manoeuvres within just hundreds of milliseconds to avoid collisions.

Researchers from the US have developed an electronic version of a special neuron, unique to locusts, that allows them to react rapidly without using much energy.

Unlike current collision sensors for self-driving cars — which tend to be bulky and heavy — the insect-inspired detector is tiny and can respond in just two seconds. 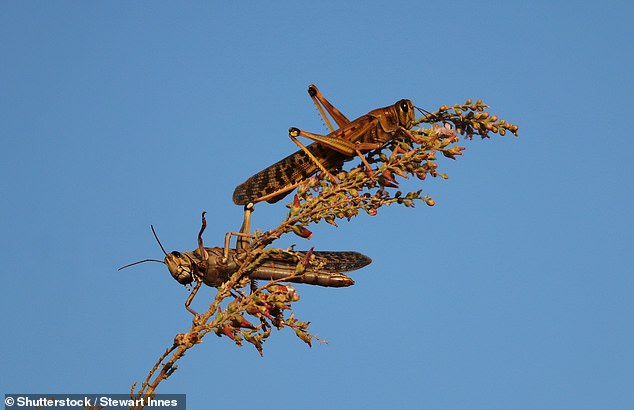 Drones, robots and self-driving cars could dodge accidents in future thanks to a new sensor inspired by the collision avoidance neurons of swarming locusts, pictured (stock image)

‘We are always looking for animals with unusual abilities, ones that do something better than humans,’ said paper author and engineer Saptarshi Das of the Pennsylvania State University.

‘Insect vision is something people use regularly to design automatic systems because they fly and don’t collide, but then we found locusts are unique.’

Unlike other insects, locusts use a single, specialised neuron in order to avoid collisions — one experts call the Lobula Giant Movement Detector, or ‘LGMD’.

‘So we started looking at how it works and, locusts are just incredible. What these creatures can do is very humbling,’ Dr Das added.

The researchers found that the LGMD neuron responds to two signals — one from the eye, which is triggered by the sight of an approaching locust and grows as the other insect gets closer — and the second the bugs’ relative angular velocities.

‘Because the neuron has two branches, the locust computes the changes in these two inputs and realises that something is going to collide, so the avoiding locust changes direction,’ added Penn. State engineer Darsith Jayachandran.

Based on the locust’s special avoidance mechanism, the researchers developed a nano-sized collision sensor using a photo-detector made of a single layer of molybdenum sulphide.

They placed this on top of a tiny programmable memory circuit that together can — using only a small amount of energy — mimic the neuron response in flying locusts.

The development, the team said, ‘is a leap forward towards the development of smart, low-cost, task-specific, energy efficient and miniaturised collision-avoidance systems.’ 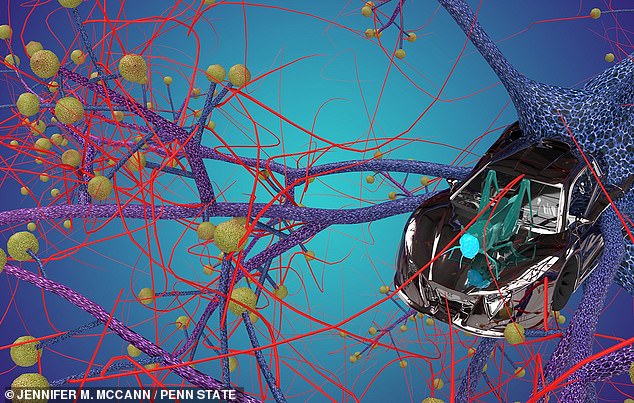 Researchers from the US have developed an electronic version of a special neuron, unique to locusts, that allows them to react rapidly without using much energy

‘While locusts can only avoid collisions with other locusts, our device can detect potential collisions of a variety of objects at varying speeds,’ said Dr Das.

With their initial study complete, the researchers now need to optimise their device to deal with situations beyond just that of direct collisions — which is what the present setup had been tuned for.

‘We can’t do every measurement, every situation. ‘So we developed a numerical model,’ added paper author and engineer Aaryan Oberoi, also of Penn. State.

‘We can also test if multiple devices on the same chip would work better. So far, it looks like a single device will be sufficient. However, a multi-pixel collision detector array can offer collision avoidance in 3D space,’ he added.

The full findings of the study were published in the journal Nature Electronics.