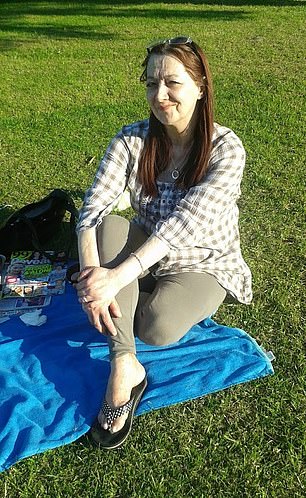 A lodger who lived with the rotting corpse of his landlady for more than a month told his girlfriend he was ‘going down to the fires with old Lucifer’ following the alleged murder, a court has heard.

Kristian Smith, 42, strangled Antoinette Donnegan, 52, then stole her jewellery and money before making a series of ‘rambling’ confessions to his girlfriend and a support worker, jurors at the Old Bailey were told.

Ms Donnegan was last seen on 1 February last year, but her body was not was found at her home in Battersea, southwest London, until more than a month later.

Smith made a series of ‘rambling’ confessions to his girlfriend and a support worker in the weeks before the victim was found, it was said.

He messaged girlfriend Caroline French he was ‘going down to the fires with old Lucifer’ and had ‘done something really bad,’ the prosecution said.

Reading the texts, prosecutor Louis Mably QC said: ‘I’ve got a few weeks left. Don’t wanna go down to the fires with old Lucifer without you sending me off.’

The prosecutor went on: ‘Something has prompted him to send this somewhat rambling, somewhat desperate text.

‘He then said [to Mr Diafli] he was going to the Caribbean and wanted some methadone to take with him.

‘He told Mr Diafli he had done something really bad and needed to leave the country, and he also said he felt like he was going to hurt someone.

‘He had said something similar to Mr Diafli a couple of weeks before, on 30 January. Two days before Antoinette was last seen alive. He said to Mr Diafli he needed to surrender himself to police.’

After his arrest Smith claimed Ms Donnegan had turned violent after a drugs binge and tried to stab him with a syringe.

He said he hit Ms Donnegan with a mug in self-defence but claimed she was still alive when he fled from the flat.

The mug was found smashed to pieces next to the body amid blood-spattered furniture and a pile of clothes shoved under the bedroom door outside to block the foul stench.

The prosecutor went on: ‘He said Antoinette Donnegan was a drug addict and would come violent and aggressive, that she had been taking drugs and had started to call him names and tried to stab him with a needle.

‘He said he fought back and picked up a coffee cup and hit her once over the head and managed to leave the flat leaving her alive and well still shouting at him.

‘Later he returned and found her dead on the floor and he said everything that resulted was out of panic.

‘That’s his account. Obviously it doesn’t explain injuries to two sides of the head and the presence of broken ribs.’

Mr Mably said it was difficult to know precisely how Ms Donnegan had died due to the state of decomposition.

The prosecutor said: ‘The body [was] lying face down, almost in a foetal position.

‘A detailed post mortem examination was carried out on the body to try and identify the cause of death and the extent of her injuries.

‘This was an exceptionally challenging task, because the fact was that the body had suffered significant decomposition.

‘Indeed, it was so difficult, that the doctors have not been able to identify the precise cause of death.

‘A jumper was looped around her neck and the skin was very, very tight to the jumper. The obvious signs of strangulation would not be present [because of decomposition].

‘Police found a smashed coffee cup and the injuries to her scalp were consistent with having been smashed over the head with a weapon of that kind.

‘The medical evidence suggests she was beaten up severely which led her to collapse and die.

‘It must have been the defendant who did this. He was her lodger, he concealed what he had done, he stole her money and he took her telephone and her jewellery.’

Smith, of no fixed address, has admitted fraud and preventing a lawful burial but denies murder.