Kangana Ranaut made headlines this morning when she suggested that actors Ranveer Singh, Ranbir Kapoor, director Ayan Mukerji and ‘Vicky Kaushik‘, should send samples of their blood for drug tests to crush all allegations and rumours against them.
Tagging the office of the Prime Minister of India, the actress said, “I request Ranveer Singh, Ranbir Kapoor, Ayan Mukerji, Vicky Kaushik to give their blood samples for drug test, there are rumours that they are cocaine addicts, I want them to bust these rumours, these young men can inspire millions if they present clean samples @PMOIndia.”

While it was later clarified that Kangana intended to write the name of Bollywood actor Vicky Kaushal and that “Vicky Kaushik” was a “typo error”, Twitterati and meme-makers had a field day poking fun at the actress and her tweet. In fact, the name ‘Vicky Kaushik’ even took over the top 5 trends on the micro-blogging platform.

The social media platform erupted with hilarious Bollywood-inspired memes, with many asking “Who is Vicky Kaushik?”

Scroll below to see what they had to say:

Vicky Kaushal after seeing that Kangana said Vicky Kaushik in her tweet : https://t.co/BZA1VDNbFC 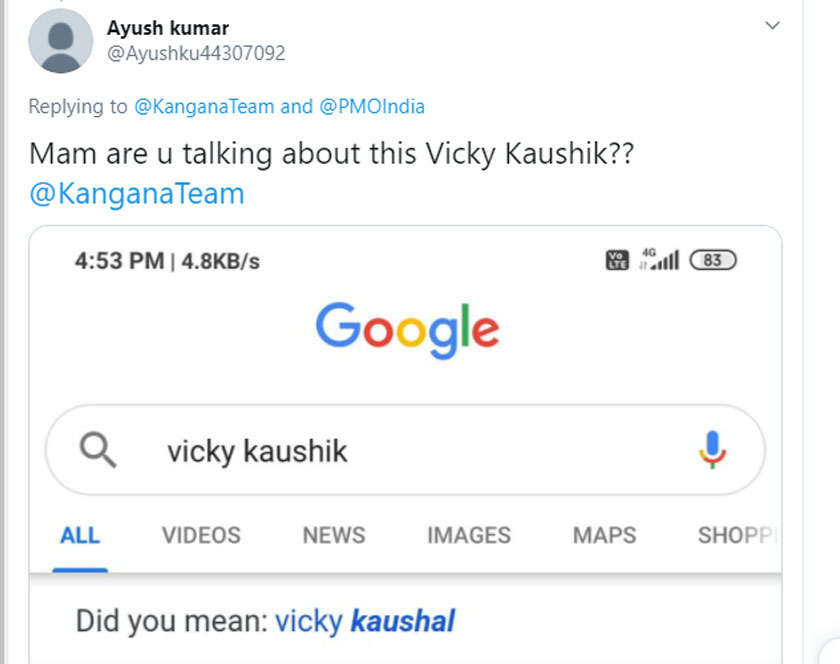 Vicky kaushal when asked if he knows Vicky Kaushik https://t.co/l76FKn6kRH

I don’t know who Vicky Kaushik is. https://t.co/giNbZdOY85

Kangana made a typo “Vicky Kaushik” and now it’s trending in India.. Her power amazes me https://t.co/Jl5rqdqLSs

Ranaut tweeted last week alleging that cocaine is the most commonly consumed drug in Bollywood parties.

“Most popular drug in the film industry is cocaine, it is used in almost all house parties it’s very expensive but in the beginning when you go to the houses of high and mighty it’s given free, MDMA crystals are mixed in water and at times passed on to you without your knowledge,” she said last week.

The National-award winning actress had made a remark on social media claiming that “If Narcotics Control Bureau enters Bullywood, many A-listers will be behind bars.”

Her statement came after a drug angle emerged in the Sushant Singh Rajput death case, with Rhea Chakraborty‘s WhatsApp chats fuelling the allegations.

Post the statement, Ranaut has also said she is “more than willing to help the Narcotics Bureau but I need protection from the central government.”
Source