Commuters in London were stuck in teeming rush hour traffic this morning as it soared past pre-Covid Britain levels, data shows.

Journeys were blighted by road works, full buses and new cycle schemes as the capital struggled to readjust to the increase in passengers.

It comes amid growing fury over the number of trains on the tracks and lack of social distancing on public transport.

Congestion levels for London showed vehicles on the road rocket from 47 per cent last week to 72 per cent at 8am today – up by 25 percentage points.

But commuters were hit with delays as the capital was blighted by 25 roadworks inside the M25. 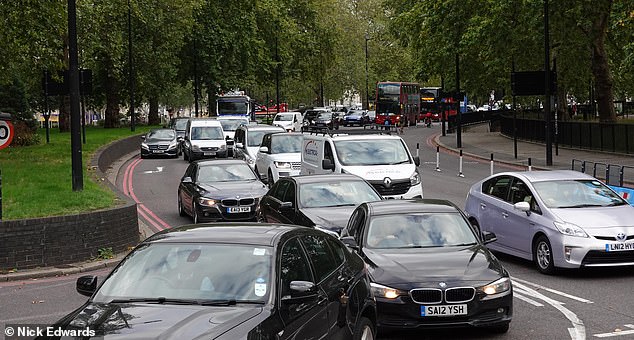 LONDON: Journeys were blighted by road works, full buses and new cycle schemes as the capital struggles to ramp up services for the increase in passengers 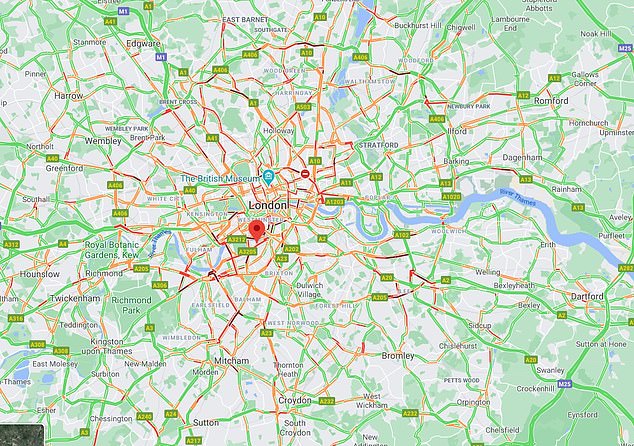 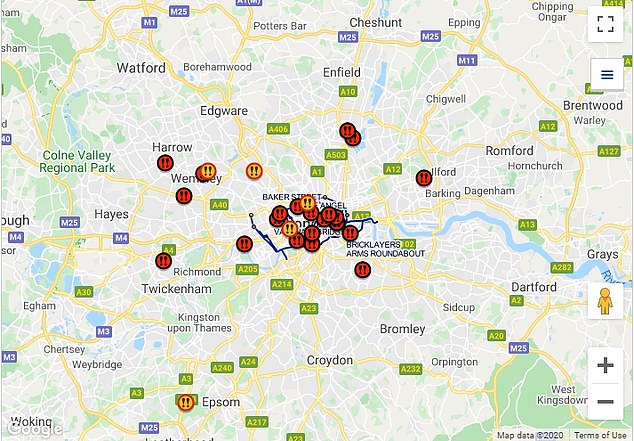 The A1, from north London into the city centre, faced lane restrictions and phased closures due to the Tottenham Hale regeneration scheme.

Those living in the wealthy west also saw congestion around Knightsbridge near Hyde Park because of temporary traffic signals on the A4.

Even the City was hit as London Bridge remains closed to all traffic except buses, taxis and bicycles as maintenance continues.

And for those trying to avoid roadworks by taking public transport, there were reports of buses skipping stops as they already had their 30-person Covid capacity.

London’s new ‘Covid friendly’ cycle lanes also appeared to to have come at the worst possible time as works led to further traffic.

Yesterday footage emerged of a fire engine stuck in a road block caused by construction on the so-called Low Traffic Neighbourhoods (LTN) in Ferndale.

Manchester, which has some areas in local lockdown due to a spike in coronavirus cases, had congestion levels at 39 per cent – two percentage points up on last week.

Birmingham, which is teetering on the edge of having new restrictions brought in, also saw just a five per cent rise on last week’s data.

Liverpool followed the trend and saw a small increase in people on its roads at rush hour, with traffic up by five percentage points on the previous week. 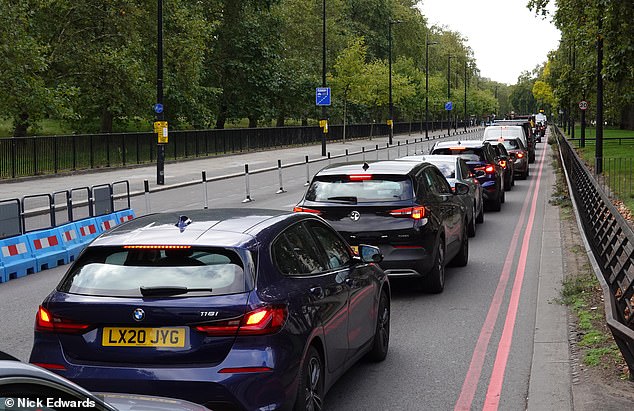 MANCHESTER: The city, which has some areas in local lockdown due to a spike in coronavirus cases, had congestion levels at 39 per cent – two percentage points up on last week

BIRMINGHAM: The second city, which is teetering on the edge of having new restrictions brought in, also saw just a five per cent rise on last week’s data

LIVERPOOL: The city saw a small increase in people on its roads at rush hour, with traffic up by five percentage points on the previous week

But smaller cities such as Nottingham and Sheffield saw congestion levels fall, suggesting fewer cars were on the road today.

Both cities had a three per cent decline in traffic levels compared to last week’s TomTom data.

It comes as new figures show demand for rail services has fallen despite people being encouraged to return to the workplace.

Plans for a train service between Blackpool and London have been scrapped because of Covid-19.

Rail chiefs at Grand Central said the proposed route was no longer viable due to economic uncertainty and changed travel patterns.

The firm’s managing director, Richard McClean, said: ‘So much effort has been put into these exciting plans to launch services between London and Blackpool that it is heartbreaking to have to abandon them at this point but the pandemic and its effect on our expansion plans have just proved too big an obstacle.

‘Despite months of work to adjust our costs and monitor travel behaviour for signs of change it became more obvious to us that to invest in what is essentially a start-up enterprise in this climate was simply not feasible and therefore we reluctantly reached the very tough decision to cease the project permanently.’

The proposed expansion of Grand Central’s services would have linked communities in Blackpool, Preston, Nuneaton and Milton Keynes directly to London Euston.

Offices had been set up in the Lancashire resort as part of the project with extra staff taken on, including drivers.

Talks are under way between affected employees and rail unions over potential job losses.

The estimated number of train journeys across Britain on Monday was 33 per cent of pre-coronavirus pandemic levels, Department for Transport (DfT) data shows.

This is the same figure recorded on three days last week and six percentage points lower than Monday August 24.

Timetables were ramped up to around 90 per cent of normal levels this week, with operators insisting their carriages are ‘safe to travel in’ and telling commuters they can ‘travel with confidence’.

In late August Transport Secretary Grant Shapps claimed it was safe for more people to go back to the workplace as there are ‘limitations’ to homeworking.

Speaking to LBC, he said: ‘Our central message is pretty straightforward. We’re saying to people ‘it is now safe to return to work’.’

The DfT’s data shows that other forms of public transport have seen an increase in demand.

On Monday, bus use outside London was at 54 per cent of pre-pandemic levels, compared with 49 per cent on the first working day of last week.

This suggests a higher proportion of workers with shorter commutes, conducted by bus or Tube, are returning to workplaces than rail commuters.

Boris Johnson yesterday urged people to limit their social contact ‘as much as possible’ and to minimise interactions with other households as he outlined new measures to control a surge in coronavirus cases.

The PM said he was ‘sorry’ two households that exceed six people would no longer be able to meet in England from Monday, and said he wished that he did not have to take such steps.

But addressing the first Downing Street press conference since July, Mr Johnson said ‘if we are to beat the virus then everyone, at all times, should limit social contact as much as possible’.

‘It is safer to meet outdoors and you should keep your distance from anyone you don’t live with, even if they are close friends or family.’

He said under the new ‘rule of six’ people ‘must not meet socially in groups of more than six – and if you do, you will be breaking the law’.

NOTTINGHAM: Smaller cities such as Nottingham and Sheffield saw congestion levels fall, suggesting fewer cars were on the road today

SHEFFIELD: Sheffield (pictured) and Nottingham had a three per cent decline in traffic levels compared to last week’s data

‘This will apply in any setting, indoors or outdoors, at home or in the pub. The ban will be set out in law and it will be enforced by the police – anyone breaking the rules risks being dispersed, fined and possibly arrested.’

The PM said the new rules were being introduced to ‘prevent another wholesale national lockdown’, and said he was ‘still hopeful’ that ‘we could be able to get some aspects of our lives back to normal by Christmas’.

The uptick suggests the national R number is now above 1 – meaning the virus is spreading exponentially. 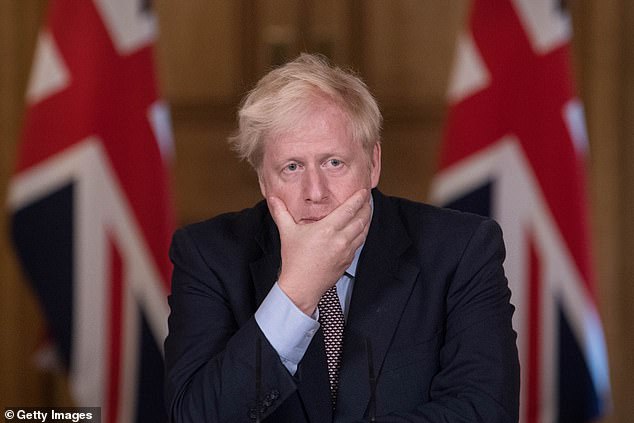 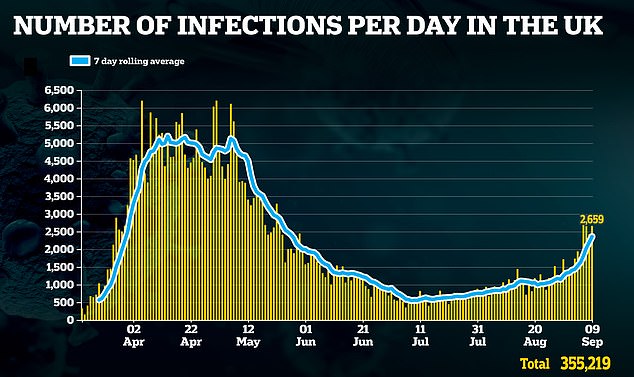 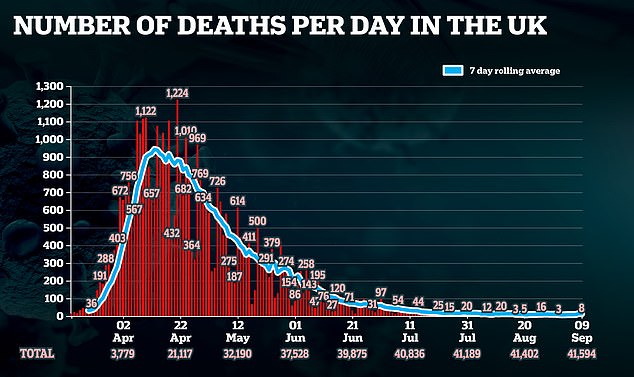 England’s chief medical officer, Professor Chris Whitty, warned the period between now and spring will be ‘difficult’ but said that with decisive action there is a ‘good chance’ of bringing rates back down under control.

He said there had been ‘rapid upticks’ in cases among some age groups, but that in school aged children and older people the number of infections remained ‘flat’.

Mr Johnson also used the press conference to outline plans to use testing to identify people who do not have coronavirus, so they can ‘behave in a more normal way, in the knowledge they cannot infect anyone else with the virus’.

The ‘moonshot’ plan, the Prime Minister said, could enable theatres and sports venues to test audience members on the day and allow in all those testing negative, as well as enable workplaces to operate more normally.

It would use swab or saliva tests that can turn around results in 90 or 20 minutes. Mr Johnson said he hoped ‘literally millions of tests’ could be processed every day.

The approach will be piloted in Salford from next month, with audiences in indoor and outdoor venues, and then the Government hopes ‘to go nationwide’.

Labour leader Sir Keir Starmer said his party supported the ‘principle of the measures and we ask everybody to follow those rules’.

The British Medical Association said: ‘It now seems illogical, with infections remaining above 2,500 a day, to delay the new measures around social gatherings until after the weekend, when people will want to meet up, and risk spreading the virus further.’