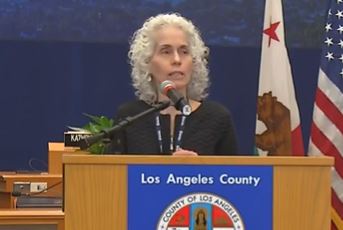 “It had nothing to do with the election per se, as much as it had to do with — we need about six weeks of implementation for the school openings that are going to be happening so that we can have a lot of assessment data that will help guide and inform any decisions we make,” Ferrer told the L.A. County Board of Supervisors. “I apologize for any confusion that I may have caused by referencing the elections in early November.”

In early September, California Governor Gavin Newsom amended the state’s coronavirus reopening guidelines to allow all school districts to apply for waivers and reopen. Local health officials have the final say, however. They can impose more stringent restrictions on schools if they so choose.

Earlier this month, the county agreed to allow in-person instruction for some students in kindergarten through 12th grade, but only for small groups of students with individualized learning plans, students requiring instruction for English as a second language and students needing other “specialized in-school services.”

Ferrer said Monday that 59 schools had submitted plans to offer such in-person instruction, and about half of them were likely to be operating by this week.

But that avenue is for students with special learning needs or those who are ESL. It does not include the majority of L.A. schoolchildren. Those students will not be allowed to return to school at this point.

Public Health will not be opening the waiver program for instruction of students in grades TK-6 as the department monitors the implementation of this effort to safely get students needing specialized in-school services back to school.

Ferrer sparked a spate of social-media conspiracy theories with the comments about the election, which she made in a conference call last week with local education officials, telling them schools are unlikely to reopen for in-person learning “until after the election” on Nov. 3.

The story was picked up by Fox News and tweeted by the outlet’s White House Correspondent, Kevin Corke.

“We don’t realistically anticipate that we would be moving to either tier two [red] or to reopening our K-through-12 schools at least during, at least until after the election, after, you know, in early November,” Ferrer said on the call, a recording of which was first obtained and aired by KFI radio.

“Like, when we just look at the timing of everything, it seems to us the more realistic approach to this would be to think that we’re going to be where we are now…until we’re done with the election.”

The comments quickly drew online criticism contending her comments prove the suggestion the coronavirus is being used as a political weapon to harm President Donald Trump’s reelection chances.

Ferrer insisted on Tuesday, however, that her reference to the election was only describing a general time frame of early November in response to a question about the timing of potential additional school openings.

She said public health officials would be working with each school to ensure they are meeting all required safety protocols. All other schools remain closed for in-person learning throughout the county due to the virus.

Speaking to the Board of Supervisors Tuesday, Ferrer said gauging how successful the schools are in preventing a growing number of cases will be key to the county’s decision whether to open schools more broadly.

One of the most effective ways of limiting the spread of the virus among children has been to keep them in small groups or cohorts to keep the virus from spreading quickly throughout an entire school, Ferrer said.

She added that not enough attention has been given to recent reports that more than half a million American children — including more than 25,000 in Los Angeles County — have tested positive for COVID-19, despite the fact children are tested at lower rates than adults.

In Florida, for instance, one month after schools swung open their gates, the number of children testing positive for COVID-19 shot up 26%.

Though the vast majority of children do not get seriously ill, hundreds of L.A. County children have been hospitalized with COVID-19, she said, adding that even those without symptoms can spread the infection to other
children and adults.

“There continue to be literally thousands of unfilled appointments,” Ghaly told the Board of Supervisors. “We are concerned by the overall decline of people seeking testing throughout the county.”

She urged anyone with symptoms that could be related to COVID-19 to get tested, as well as anyone who has been in contact with a person who has tested positive. Ferrer also urged those who have been in a crowded situation with people without masks to get tested.

Ferrer said Monday the county was unlikely to consider any more business reopenings before the end of September so officials can see if the recent Labor Day holiday leads to spikes in infections seen after the Memorial Day and Fourth of July weekends.

“We’ve had significant spikes in cases after the holidays, and that has resulted in us needing to sort of take some steps backward,” Ferrer said Monday. “We want to avoid doing that again so we’re going to wait a couple weeks, look at our data, review it with our board…And we will be getting back to everyone toward the end of the month.”

Since the virus has a two-week incubation period, spikes in possible new cases from increased public exposure over Labor Day weekend would not be reflected in case data for about 14 days.

Supervisor Kathryn Barger, who chairs the board, said Tuesday the board’s agenda will include a discussion on public health orders each week.

On Tuesday, the county reported 47 more coronavirus-related deaths, while Long Beach health officials announced one fatality, bringing the countywide total since the start of the pandemic to 6,274. The county also announced 474 new cases, while Long Beach reported 72 and Pasadena added three more, pushing the overall total to 255,123. County officials noted that the unusually low daily case number reflects the recent reduced availability of testing due to the heat and air quality.

A total of 772 people were hospitalized due to the virus as of Tuesday.