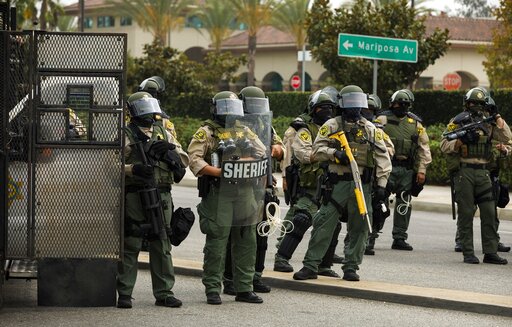 Trump said the shooter, who fired through the cruiser window at the officers, represented “Animals that must be hit hard!” He added in a second tweet a call for a “quick trial” and “the death penalty” if the officers die.

Democratic presidential candidate Joe Biden added similar sentiments this morning, saying, “This cold-blooded shooting is unconscionable and the perpetrator must be brought to justice.”

UPDATE: Los Angeles County Sheriff’s Homicide investigators have offered a $100,000 reward for information leading to the arrest and conviction of the suspect who shot two deputies Saturday night.

The incident was reported Saturday, September 12, 2020, at approximately 6:58 p.m. at the MLK Transit Center in Compton, California.

The Sheriff’s Dept. issued a statement on the circumstances of the shooting. “A lone gunman ambushed two of our deputies last night. The suspect approached the vehicle from behind and fired several rounds from his firearm at the deputies, striking them. The deputies sustained critical injuries.

“The suspect is described as a male Black 28-30 years-old, wearing dark clothing. There is no additional information available at this time. “

Tensions have been high in the South Central Los Angeles area since Aug. 29, when 29-year-old Dijon Kizzee was shot and killed by L.A. County Sheriffs in a confrontation while he was riding a bicycle. His death has sparked several days of protests in that area.

After the Saturday night shooting of the L.A. Sheriffs, a crowd gathered outside St. Francis Medical Center in Lynwood, where the shooting victims were taken. The crowd blocked the emergency entrance and exit and chanted, “We hope they die,” the sheriff’s department said in a tweet.

A reporter from LAist.com was arrested by lawmen attempting to disperse the crowd.

Law authorities said the shooting happened when a lone gunman approached the parked police car in Compton and opened fire. The shooter, wearing black clothing and a black cap, then ran from the scene. Police are still searching for the shooter. The incident was announced via Twitter at 11 PM Pacific time.

The shooting victims were not named, but were said to be officers who had served just over a year in the department.

LAist’s Josie Huang, the arrested reporter, was charged with obstructing justice. The police department initially refused to provide details of what happened, but later, Deputy Juanita Navarro of the Sheriff’s Information Bureau confirmed that deputies took Huang into custody on suspicion of obstruction of justice by “interfering with a lawful arrest.” Huang claimed she was trying to document the arrest of a protester.

Navarro also said Huang “didn’t have proper credentials.” Video shows at least five deputies pinning Huang to the pavement, handcuffing her, and placing her in a patrol car. Huang had just left a news conference by Sheriff Alex Villanueva.

KPCC, the Southern California Public Radio station which runs LAist, issued this official statement: “We offer condolences to the two sheriff deputies who were shot Saturday evening. These are challenging and stressful times for everyone, but Josie Huang was arrested while doing her job. The charges should be dropped. Her arrest is the latest in a series of troubling interactions between our reporters and some local law enforcement officers. Journalists provide an essential service, providing fair, accurate and timely journalism and without them, our democracy is at risk.”

This cold-blooded shooting is unconscionable and the perpetrator must be brought to justice.

Violence of any kind is wrong; those who commit it should be caught and punished.

Jill and I are keeping the deputies and their loved ones in our hearts and praying for a full recovery. https://t.co/330QfeIUGg

If they die, fast trial death penalty for the killer. Only way to stop this! https://t.co/K3sKh28GjX

Animals that must be hit hard! https://t.co/zrOd9ZUl8o