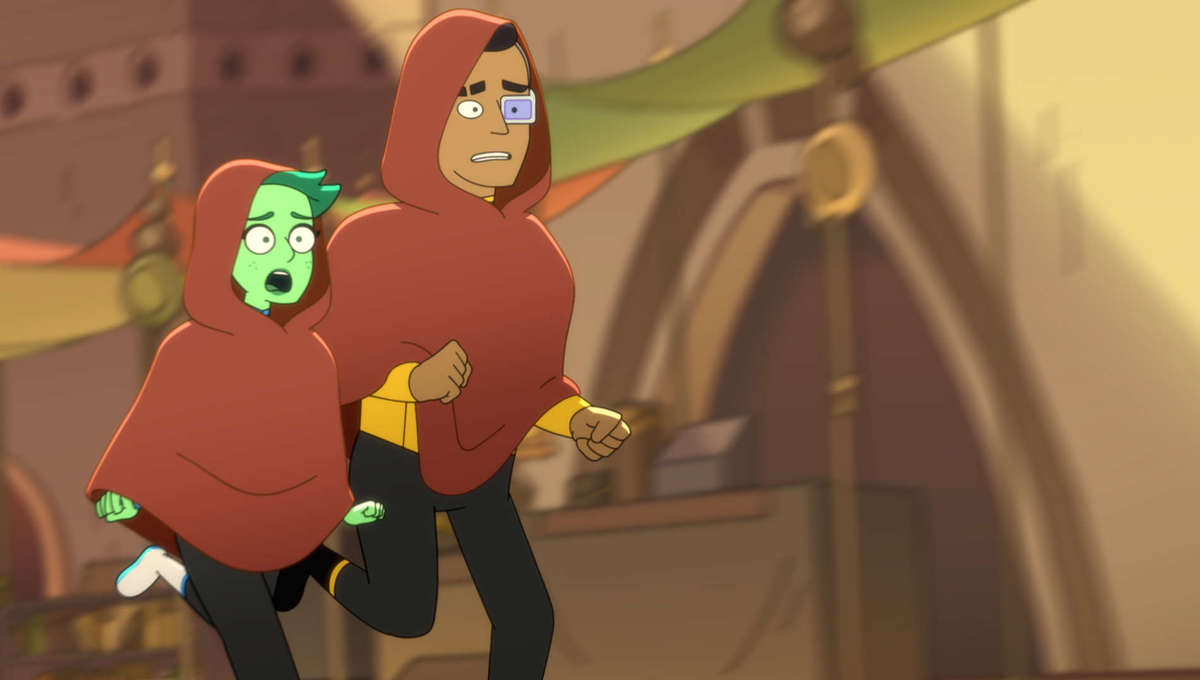 Very few Star Trek fans would cite a holodeck episode as their favorite episode of any given series. And the reason why is simple: Nearly every single holodeck episode of The Next Generation, Deep Space Nine, or Voyager, is also a story in which the holographic characters and situations suddenly turn deadly, or malfunction in such a way that defies reason. In the sixth episode of Star Trek: Lower Decks Season 1, the show embraces this absurd trope head-on, and the result is an episode that will make Trekkies remember some of the sillier rogue-AI stories from Trek‘s past, and maybe make you reconsider how seriously you take Westworld.

For fans who are hoping that Rutherford and Tendi will finally become a couple — and make the shipping name “Rundi” into a real thing — this episode brings them very close. When Rutherford takes Tendi to the holodeck to help her overcome her fear of spacewalking, it seems like, for a moment, we’re going to get a sweet, romantic episode in which they finally manage to admit their true feelings for each other. But, as the previous episode reminded us, people in Starfleet can rarely have straightforward or sweet romantic episodes, because just as Rutherford and Tendi’s magnetic boots start to connect, a rogue holodeck program threatens to kill them, literally.

When a huge shipwide failure occurs, Tendi and Rutherford are trapped with a rogue AI hologram program named “Badgey,” who is basically an unholy mashup of that cutesy Microsoft Office paperclip “helper,” and the Starfleet insignia. Like so many pseudo-sentient holograms in Star Trek‘s past, Badgey turns into a killing machine really quickly, a fact that overtly mocks nearly every episode featuring the holodeck in all ’90s Trek shows; from its introduction, the holodeck was a place characters usually went so they could be trapped. In the Season 1 TNG episode “The Big Goodbye,” Picard enters the holodeck to participate in a hard-boiled detective story in the guise of a private eye named “Dixon Hill.” But, of course, a bizarre shipwide failure ensues, and suddenly the holographic mobsters and wiseguys are suddenly very dangerous, and the holographic simulation becomes super real.

This episode aired in 1988, and from that point, the blueprint for this kind of episode remained fairly unchanged throughout all of TNG, DS9, and Voyager. Although, with “Badgey,” the concept is far more meta. For the most part, when holodeck characters go berserk, they take the form of a pre-existing fictional character. In the TNG episode “Elementary, My Dear Data,” a holographic version of Moriarty was created who was accidentally endowed with the ability to defeat Data, and, most importantly, take over the Enterprise. Rutherford references this — and several other ’90s Trek holographic characters — when he says the “holodeck is not just for hanging with Sherlock Holmes, Robin Hood, Sigmund Freud, Cyrano de Bergerac, and Einstein and DaVinci and Stephen Hawking and Socrates.”

Most of these characters appeared as holograms in episodes of TNG or Voyager, with the strange exceptions of Sherlock Holmes and Robin Hood. Although Sherlock Holmes characters appeared in the episodes “Elementary My Dear, Data,” and “Ship in a Bottle,” Data himself played Sherlock Holmes, and Data is an android and not a hologram. Similarly, although Captain Picard took on the guise of Robin Hood in the episode “Q-Pid,” that didn’t happen on the holodeck, but instead inside of some kind of bizarre dimension created specifically by “Q.”

The reference to Cyrano de Bergerac is also a deep cut, specifically because although that character never actually appeared as a holographic character, the TNG character we most associate with holograms — Lt. Barclay — played Cyrano, briefly, in an episode called “The Nth Degree.” In that episode, infamous hologram addict Barclay also merged his mind with the ship’s computer, and briefly became an insane humane/AI hybrid. This, of course, is the exact same thing that happens to the character Fletcher in this new episode of Lower Decks, and the tip-off is the quick jab at Cyrano, a character that also wasn’t a hologram, but who, on some level, was a catalyst for a different story that featured a character who was obsessed with holograms. (Yes, it’s a lot.)

Within the confines of ’90s Trek, the idea that a simulation could even have a feature that would allow for holograms to become dangerous is somewhat absurd. In First Contact, back in his Dixon Hill guise, Picard is able to mow down a bunch of Borg with a Tommy gun, and explains that because he disabled the holodeck’s safety protocols, “even a holographic bullet can kill.”

This trope is obviously not limited to Star Trek, and if you think about it for just a little bit, is pretty much the exact premise of Westworld. Obviously, the Hosts of Westworld have more sophistication than a murdering hologram like “Badgey,” but the notion that the technology is already out of control basically the second it’s created is the same in both scenarios. Cynically, you could argue that all of these storylines can be traced back to Frankenstein, but the essential difference is that the holograms in Star Trek are, in theory, created mostly for amusement. Rutherford using the holodeck to create a training program is fairly responsible, and actually, it’s odd how infrequently holographic training simulations are seen in Star Trek, at least in contrast to the number of times people are just goofing around on the holodeck instead.

Overall, the reason why this Lower Decks joke works is that our loveable group of slackers aren’t the ones messing around. Mariner and Boimler are trying to do the right thing, while Rutherford and Tendi are just trying to use the holodeck to complete some training. In most holodeck-run-amok stories from Trek‘s past, the main characters were all trying to have some kind of holographic vacation, and then everything backfired. What’s funny this time, is that our heroes were actually just trying to get through their day, and this ridiculous trope tried to destroy them anyway.