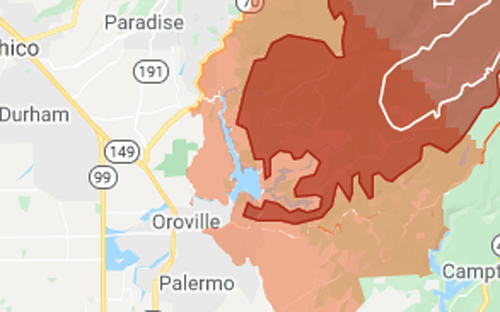 About 20,000 people were under evacuation orders Wednesday night as the Bear Fire charged toward Oroville.

The fire is part of the North Complex, which started on Aug. 17. After three weeks burning, it had been at 40,000 acres on Monday with about 50% containment. Then, amid dry, windy weather, it grew to 150,000 acres Tuesday and 252,163 acres (394 square miles) on Wednesday. Hundreds of homes have been destroyed, thousands more are threatened, and three people have died.

Containment was at 24% Wednesday evening.

Evacuations were ordered in Butte, Yuba and Plumas counties. The mandatory zones as of Wednesday night are shown in orange on the map above.  The red area is the latest released perimeter map, and the white line shows the perimeter as of Tuesday afternoon.

For the most recent updates on evacuations, including warning zones: