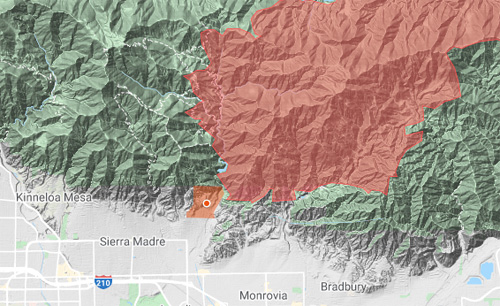 The Bobcat Fire, burning in Southern California’s San Gabriel Mountains, is moving toward homes in Monrovia, Arcadia and Sierra Madre, said the report Monday morning from the Angeles National Forest.

Warm overnight temperatures and low humidity allowed the fire to burn actively through Sunday night, the report said. It was at 36,366 acres (57 square miles) with 6% containment.

On Monday, the fire managers predicted growth of 1 to 2 miles at its southern edge, toward residential areas east of Pasadena and through the mountains to Mount Wilson. At the northern edge, it has reached the Angeles Crest Highway (Highway 2) and is expected to spread west.

Evacuations were ordered Sunday for a neighborhood at the north edge of Sierra Madre and Arcadia. That area is shown in orange on the map above.

The latest perimeter, in red on the map, showed the fire line within a mile of the observatory atop 5,712-foot Mount Wilson. The observatory’s website has links to a camera showing updated images of the approaching fire; the image below is from dawn Tuesday.