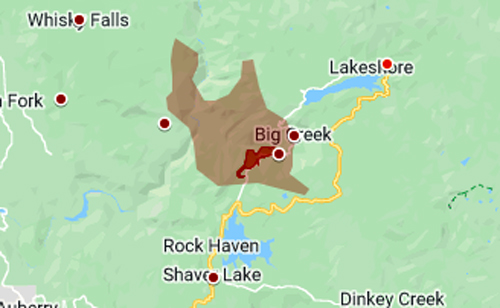 A fast-growing fire in the Sierra National Forest northeast of Fresno prompted evacuations in two counties.

The Creek Fire, which was reported around 6 p.m. Friday, had grown to 36,000 acres (56 square miles) by Saturday evening, the national forest reported.

As of Saturday evening, evacuations had been ordered for:

Highway 168 (Tollhouse Road) was closed between Cressman’s General Store and the east end of Huntington Lake.

Within hours, satellite imagery showed hot spots over an area of roughly 16,000 acres. And by the afternoon, the fire had reportedly run north along the San Joaquin River and trapped campers at Mammoth Pool Reservoir.

Evacuation updates can be found on the Twitter feeds of the Fresno County and Madera County sheriff’s offices.