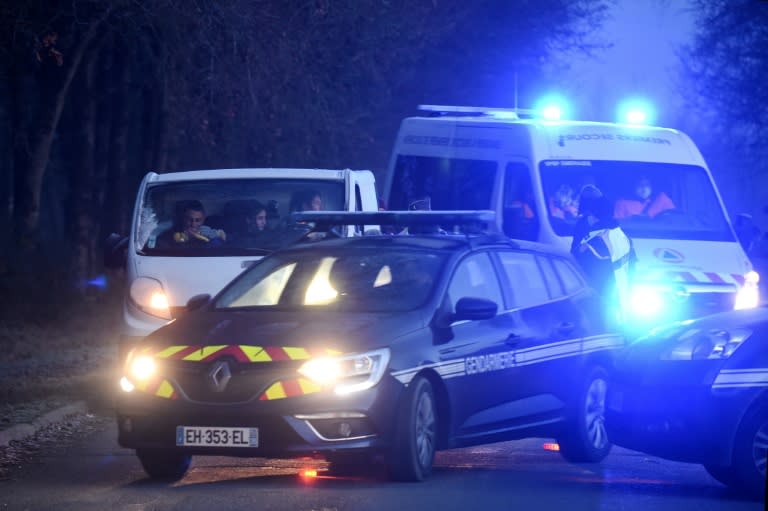 The sight of French police standing by as 2,500 people broke a national curfew to attend an illegal rave has embarrassed the government and led to questions as to why the partying was allowed to continue for two nights.

The event began on New Year’s Eve last Thursday at two disused hangars in a rural area of France’s northwestern Brittany region and had become a major international news story by the following day.

But it took until Saturday morning, more than 36 hours after techno music first began blaring from the banks of speakers, before police entered the premises and began confiscating material and cautioning participants.

Far-right leader Marine Le Pen, who regularly seizes on incidents of crime or disorder as evidence of France’s supposed decline, accused centrist President Emmanuel Macron of being “overwhelmed by a simple rave party”.

For her, the event showed “the worrying collapse of the state’s authority”, while the local head of her party claimed police had “capitulated before a few punks with dogs”.

Reactions on social media have ranged from envy among those who missed out on nightclubbing for most of 2020 because of the coronavirus pandemic, to mockery and accusations of double standards.

Some have suggested that police would have reacted differently if the party had been held in a predominantly immigrant area outside Paris, for example, where heavy-handed arrests were in the spotlight during recent Black Lives Matter protests.

Others have contrasted the passive policing to the measures used against anti-government “yellow vest” protesters in 2019, whose sometimes illegal street demonstrations were frequently met with teargas, stun grenades and rubber bullets.

Local authorities have defended their decisions, but questions remain — notably, why the rave was not prevented in the first place.

Before New Year’s Eve, the interior ministry had said 100,000 police would be on duty to prevent gatherings or illegal parties, with France under a nationwide 8-6 overnight curfew to prevent social mixing.

Daily new coronavirus cases are still around 15,000, and the government has kept bars and restaurants closed since a second national lockdown began on October 30.

Although police were aware that a rave was being organised thanks to online intelligence-gathering, they were kept guessing until the last minute about its location — as were the partygoers themselves.

Security forces were watching several sites in eastern and central France, but were caught off guard when organisers switched to the warehouses near the village of Lieuron, south of the city of Rennes.

“It was announced after 8:00 pm, after the start of the curfew,” Brittany prefect Emmanuel Berthier told reporters. “Security forces learned about it at the same time as potential participants.”

Vans carrying sound equipment, generators and DJ decks had already arrived by the time police attempted to stop people entering by car or on foot.

A relatively small number of officers were outnumbered and showered with stones and bottles in the ensuing standoff. A police car was set on fire and three officers slightly injured.

“Clearly the organisers had prepared their violent reaction to security forces,” Berthier claimed.

Pierre Sauvegrain, who heads the national police in Brittany, said a decision was made to “disengage” in order to “prevent the situation degenerating further”.

Police say they then focused on restricting access and said no new vehicles arrived after 10:00 pm on New Year’s Eve.

The rave was allowed to continue, generating the damaging images played on French television and abroad of police standing by as music blared out in the background.

“Once it gets going with 2,000 people, you can’t stop it,” an experienced organiser told AFP at the weekend.

The power could not be cut because the organisers had generators, and police were unwilling to clear the area by force — or unable to muster sufficient numbers to do so.

After a meeting at the interior ministry on Friday night — in a sign of how serious the situation had become it was chaired by the minister Gerald Darmanin himself — reinforcements were sent.

Before dawn on Saturday, the sound systems stopped, attendees began leaving and by mid-morning police had moved in and taken control.

They cautioned 1,200 people for breaking coronavirus restrictions and hundreds of others for drugs offences, with police using torches to examine the eyes of ravers for evidence of use of ecstasy or other drugs.

Two people, both in their early twenties, were arrested as suspected organisers and face hefty fines if found guilty.

One of them was charged late Monday with “endangering the lives of others” and taken into custody, the Rennes prosecutor told reporters.

On the wall of one of the hangars, a hand-painted slogan read: “Nothing can stop people dancing.”