This is the moment a huge grizzly bear charged towards hikers in Montana’s Glacier National Park, causing them to frantically run away against the advice of experts.

Photographer Dulé Krivdich was hiking back up after visiting Hidden Lake on Monday afternoon when he spotted the creature moving through the area where he and his wife had just motored through.

He said in a Facebook post that ‘a 500+ pound Grizzly came through a treeline, down a meadow and swiftly on to the trail itself to get to wherever he wanted to go.’

But the hikers just below them on the same trail were ‘totally unaware’ of what was heading their way, prompting them to start yelling a warning. 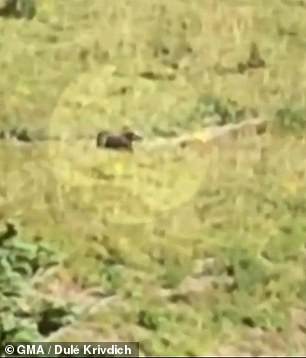 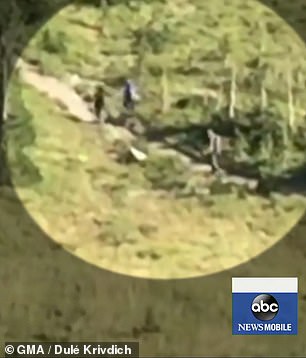 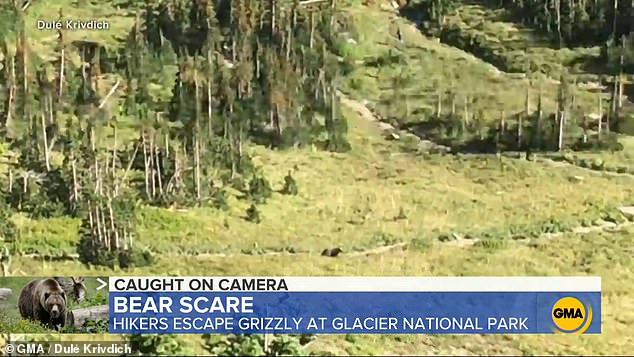 In the footage one person is heard yelling back ‘what do we do?’

However the tactic didn’t appear to work and the bear ‘made a bluff charge.’

‘We saw people booking it like we’ve never ever seen before in our lives. Even in the Olympics,’ Krivdich said in the caption of a Facebook video.

Some viewers of the video disagree that the bear made bluff charge and believe it was just curious.

However Krivdich responded online that you can see the bear did.

‘If you watch carefully enough, after it slowed down and once the folks start running again just off screen, the Bear does a bluff charge towards the runners and stops 15 yards later with the chest puffed out,’ Krivdich responded.

‘No question a bluff charge. I saw it with my own eyes.’ 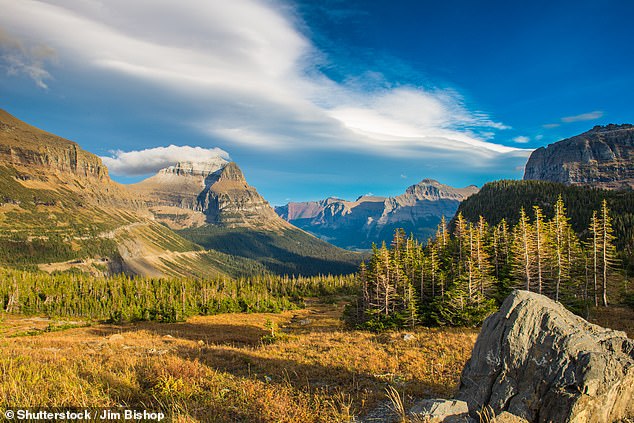 Commenters criticized the trio for ignoring advice to avoid eye contact, remain calm and slowly back away.

However Krivdich told Good Morning America  on Wednesday that their shocked reaction was understandable.

‘We complain about them running but they had a one-year-old toddler on their back,’ he told GMA.

The show said that the animals can weigh as much as 600lbs.

Hikers are advised to make noise so their presence is known in bear country and try to keep a distance of 100 yards.

However if confronted while it is close by don’t attempt to haze the bear and the same advice goes for if the encounter occurs while it’s feeding on a carcass.

The advice is to avoid eye contact, speak softly and remain still or slowly move away.

If items such as a glove or hat are available it could be useful to toss something on the ground to distract the bear.

As a last resort the person should curl up in a ball or lie face down on the ground, using hands to protect the head and neck and keeping a backpack on for protection.

However at night people are advised to fight off the bear to signify they could be a threat as the animal could be seeking food rather than trying to neutralize the potential threat of a human.

He hopes the clip can serve as an education to viewers should they be put in the same position one day.

‘I think that it was a case of the bear not knowing people were coming up as the people had no idea but even once they did they still did the worse thing … they RAN!’ Krivdich added online.

‘Thank goodness that it all went well afterwards.’

The warning comes as upland bird season and archery season begins and is expected to increase the number of visitors to the area. 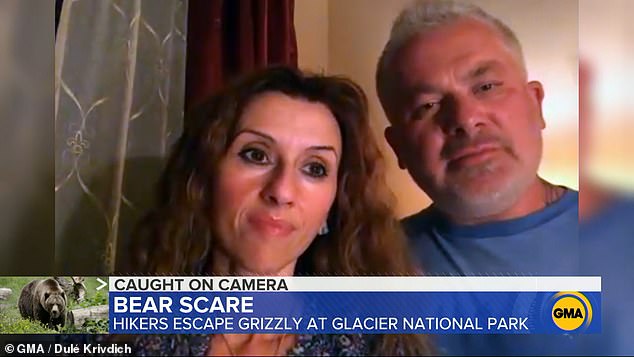 Dulé Krivdich (pictured with his wife Evie) said he sympathized with their reaction, noting they had a one-year-old toddler on their back