Vice President Mike Pence has canceled plans to attend a Trump campaign fundraiser in Montana following revelations that the event’s hosts had expressed support for the QAnon conspiracy theory.

The campaign did not provide a reason or say whether the fundraiser might be held at a later time.

The change comes after the AP reported Wednesday that hosts Cayrn and Michael Borland in Bozeman, Montana, had shared QAnon memes and retweeted posts from QAnon accounts. 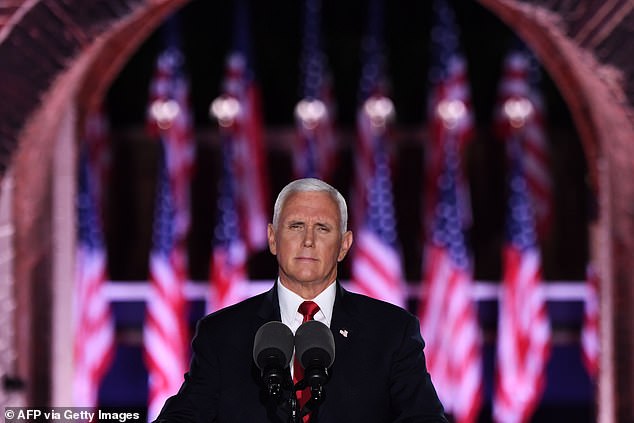 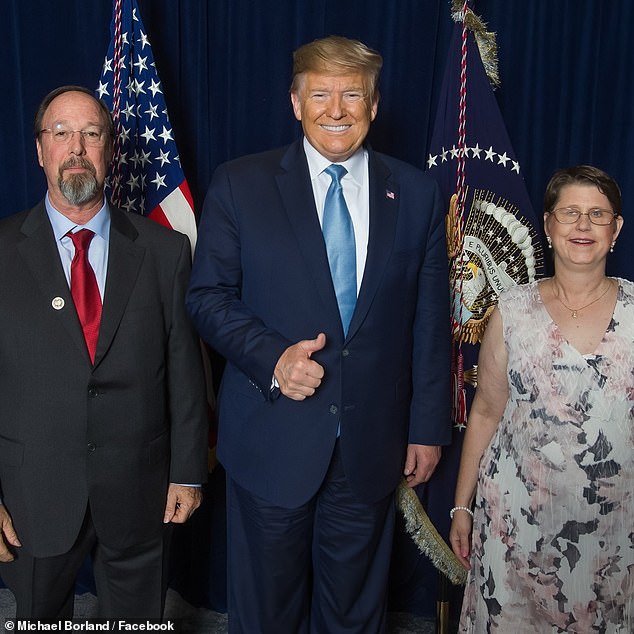 Fundraiser plans: Caryn and Michael Borland will host top Republicans led by Mike Pence next week in Montana. They two have shared QAnon memes and retweeted posts from QAnon accounts – as well as donating six figures to the cash-strapped Donald Trump campaign and posed with the president 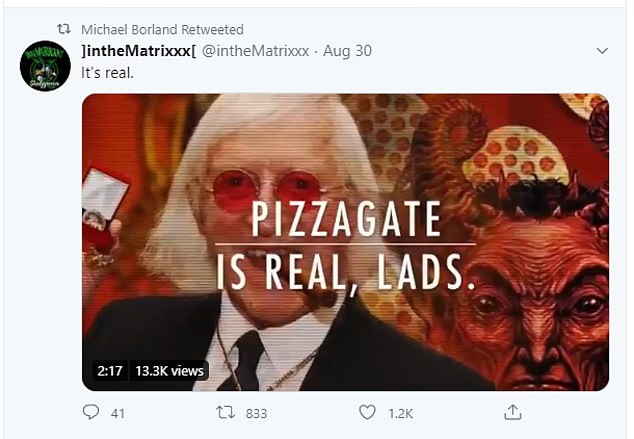 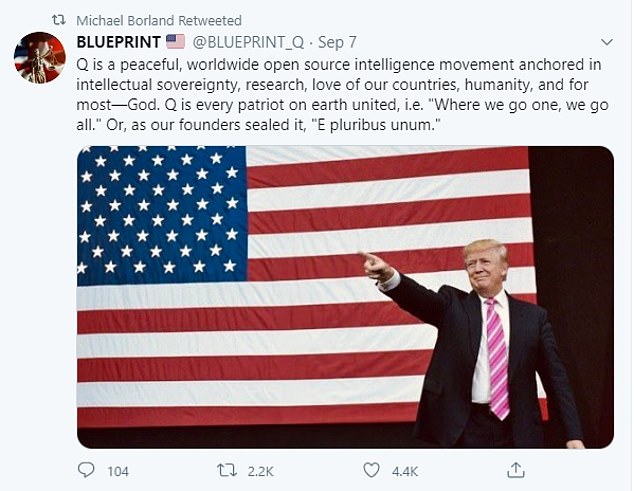 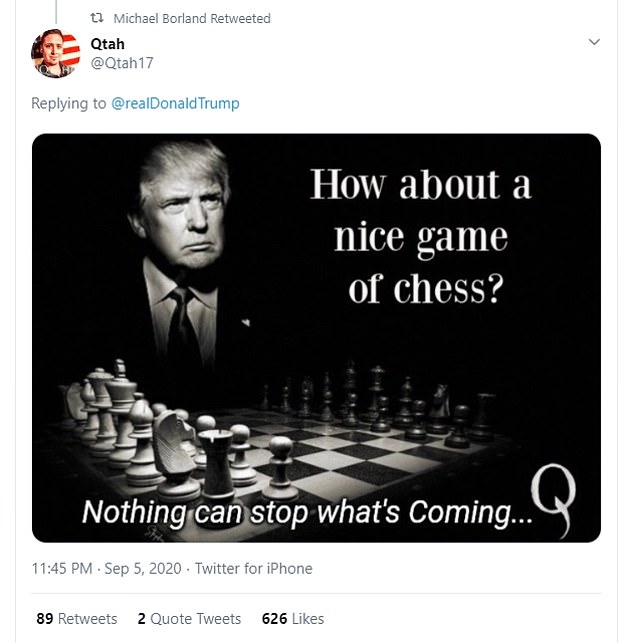 Memes: These are just some of the images posted by Michael Borland on his Twitter account. His Pizzagate claim features infamous British pedophile Jimmy Savile, a celebrity whose prolific child abuse was unmasked after his death, but also after decades of suspicion

Pence, Daines and the other Republican candidates are still scheduled to hold a campaign rally Monday afternoon in Belgrade, near Bozeman.

Pence will host a rally earlier in the day in Wisconsin, an event that was added as a substitute for the fundraiser, the Trump campaign said.

Daines campaign spokesperson Julia Doyle said the first-term senator does not know the Borlands nor ‘does he know what QAnon even is.’

She referred questions on whether the event would be rescheduled to the Trump campaign. 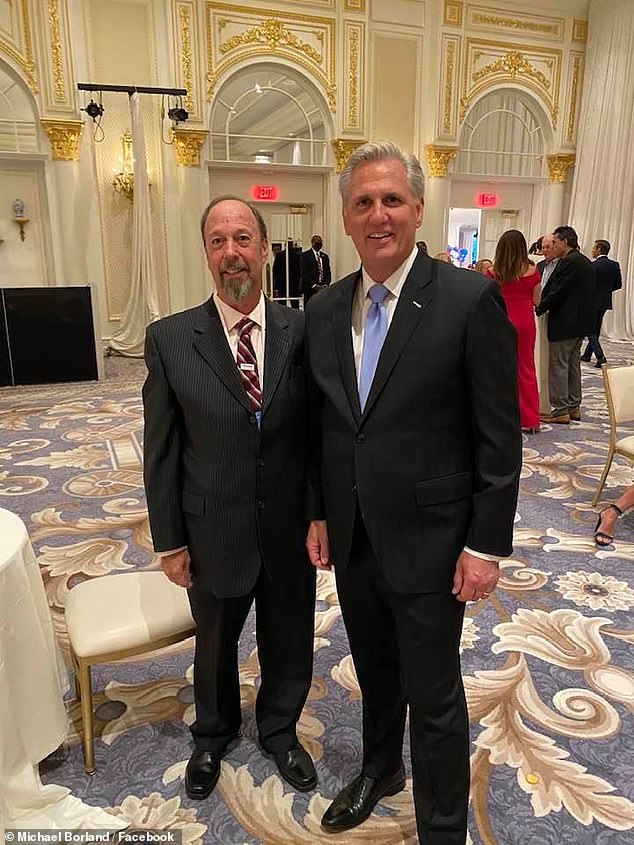 Not just Trump: Michael Borland posted proud images of him with Kevin McCarthy, the House minority leader, at the Trump Hotel in Washington during the RNC

Cards on the table: Michael Borland’s Facebook profile shows his support for QAnon

Gianforte, who faces Democratic Gov. Lt. Gov. Mike Cooney in November, also does not know the Borlands or what QAnon is, spokesman Travis Hall said.

A Rosendale spokesman said he was unaware of QAnon.

Rosendale ‘isn’t focused on false conspiracy theories and the attempts of liberal extremists to smear the President,’ spokesman Andy Westberry said in an email. He declined to say if Rosendale knows the Borlands.

The Borlands have donated over $220,000 to Trump’s reelection bid, the bulk of which was made in Caryn Borland’s name, and they were guests at the national GOP convention last month.

The QAnon narrative has grown to include other long-standing conspiracy theories, gaining traction among some extreme Trump supporters.

The movement is often likened to a right-wing cult. Some followers have run for office, primarily in the Republican Party, though some have been independent or run as third-party candidates.

The president has refused to condemn QAnon, recently telling reporters that the conspiracy theory is ‘gaining in popularity’ and that its supporters ‘like me very much.’ 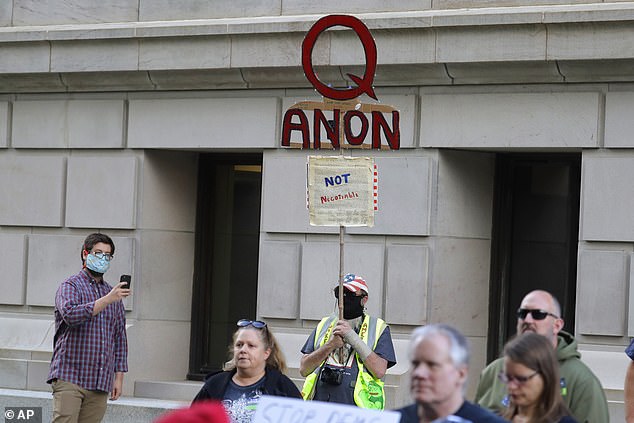 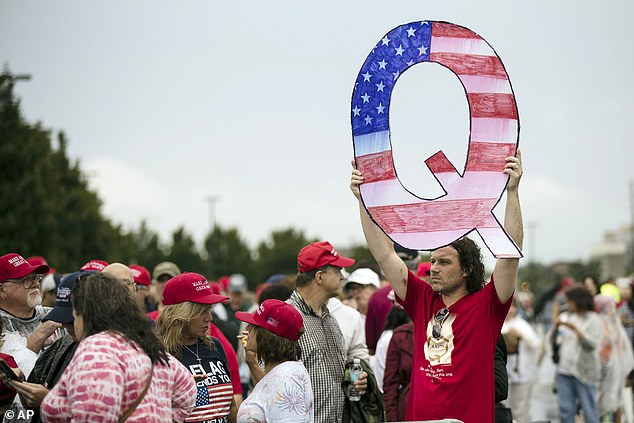 Pence has said it’s a conspiracy theory and last month told CBS, ‘I don’t know anything about QAnon, and I dismiss it out of hand.’

The Borlands have shared multiple QAnon social media posts, as well as other discredited conspiracies.

Michael Borland prominently featured several QAnon ‘Q’ logos on his Facebook page. Caryn Borland has retweeted or engaged with QAnon Twitter accounts. In April, she responded to a pro-Trump Tweet from a QAnon account by replying ‘Always’ with a praying hands emoji.

The Borlands have not responded to Pence’s decision.