She recently revealed she’s coming to terms with the physical changes to her body after welcoming her daughter Sienna with husband Hugo Taylor in May.

And Millie Mackintosh was the picture of confidence as she posed in a swimsuit during her first family trip to Santorini with her three-month-old and the sunglasses entrepreneur, 34, on Sunday.

The former Made In Chelsea star, 31, embraced her postpartum figure as she slipped into the black Melissa Odabash one-piece for images shared to her Instagram, which she captioned: ‘I don’t have a flat stomach and I’m okay with that.’ 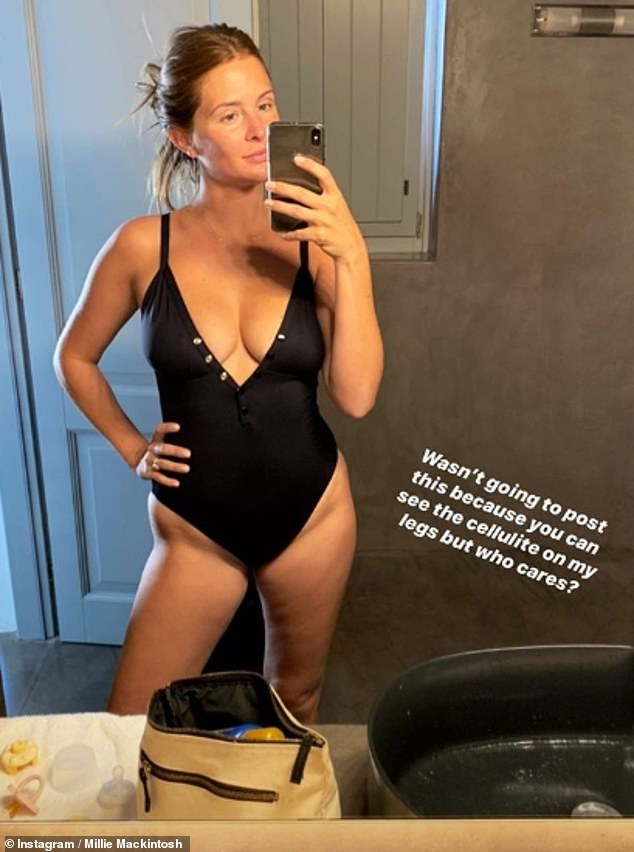 Yummy mummy: Millie Mackintosh was the picture of confidence during her first family trip to Santorini with her baby girl Sienna, three months, and husband Hugo Taylor on Sunday

Putting on a busty display, the lifestyle influencer looked sensational in the designer beachwear garment, complete with a perilously plunging neckline.

The media personality proved less is more as she went make-up free to showcase her naturally glowing complexion.

Millie declared she wasn’t let the pressures of being in the public eye affect her social media posts, as she penned: ‘Wasn’t going to post this because you can see the cellulite on my legs but who cares?

‘Also I don’t have a flat stomach and I’m ok with that.. love this swimsuit by @melissaodabash.’ (sic) 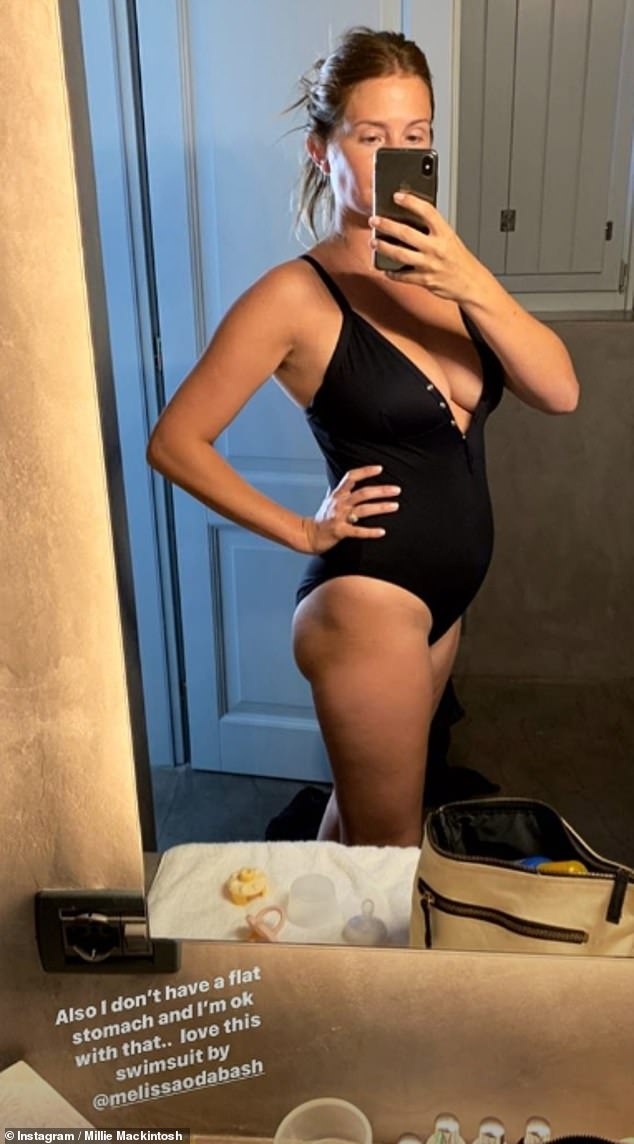 ‘I don’t have a flat stomach and I’m okay with that;: The former Made In Chelsea star, 31, embraced her postpartum figure in the black Melissa Odabash one-piece for Instagram snaps 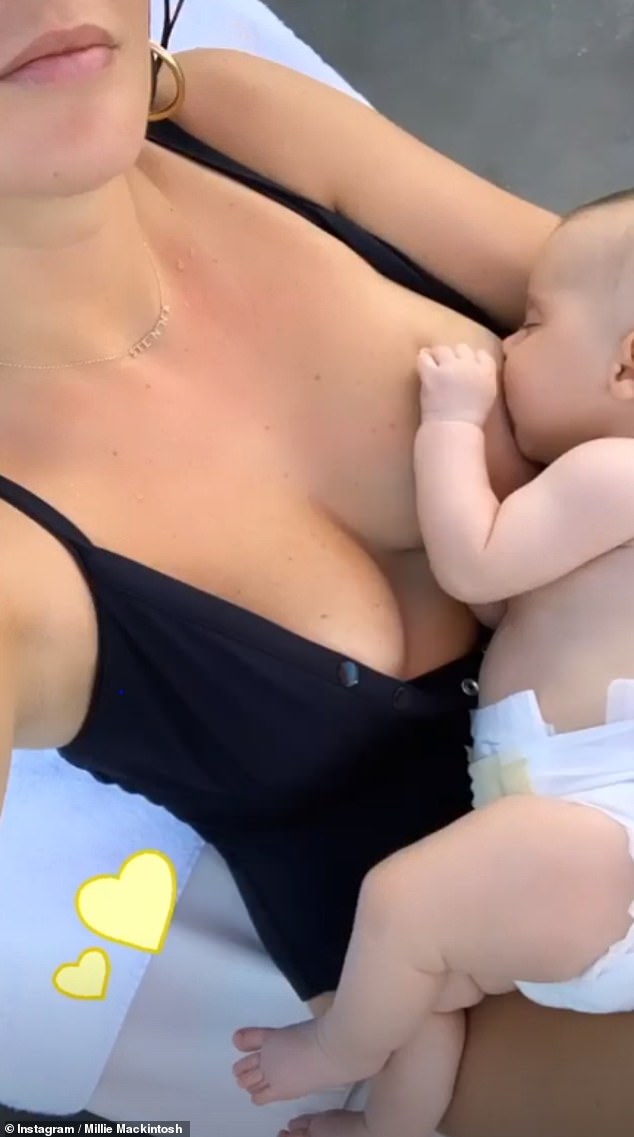 Candid: The lifestyle influencer uploaded a photo of herself nursing her little one, who turned 12 weeks on Saturday 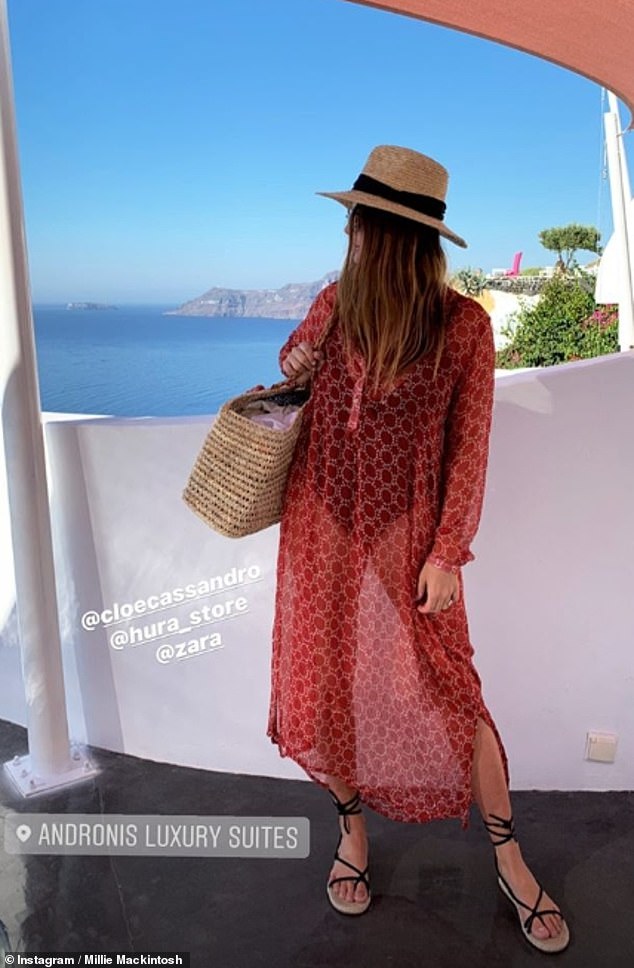 Working it: The media personality teamed her designer garment with a sheer red kaftan, lace-up sandals and a straw trilby hat as she stood by her five-star hotel Andronis Luxury Suites

On Tuesday, Millie uploaded a sweet snap of herself breastfeeding her daughter Sienna during her baby’s first flight.

Proving safety comes first, she sported a protective face mask as she thanked British Airways staff for their help during their ‘smooth’ journey.

The media personality, who has been vocal about urging others to ‘normalise breastfeeding’, appeared in great spirits as she nursed her little one.

Sharing her delight at her relaxing trip from London Heathrow Airport, the TV star said: ‘Our first experience @heathrow_airport with Sienna went really smoothly, everyone had masks on and kept their distance.

‘Planning on feeding at take off and landing to help with her ears.’ (sic) 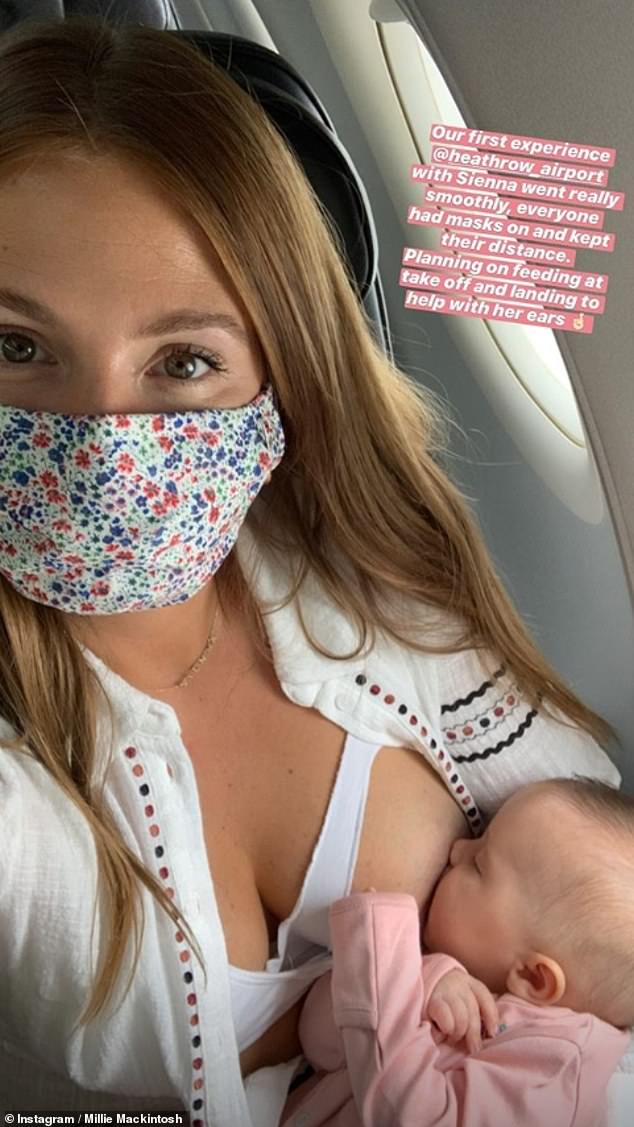 At peace: On Tuesday, Millie uploaded a sweet snap of herself breastfeeding her daughter Sienna during her baby’s first flight

On July 4, travel advice in the UK changed, with exemptions for going on holiday to certain countries and territories that no longer pose a high risk for British travellers.

Speaking to Glamour earlier this month, Millie insisted the contrast between her pre and post pregnancy appearance is akin to looking at two completely different people.

‘I just don’t like the term, ‘getting my body back,’ because I think it’s a new body, it’s different, you’ve given birth. So, it’s not your old body anymore.’ 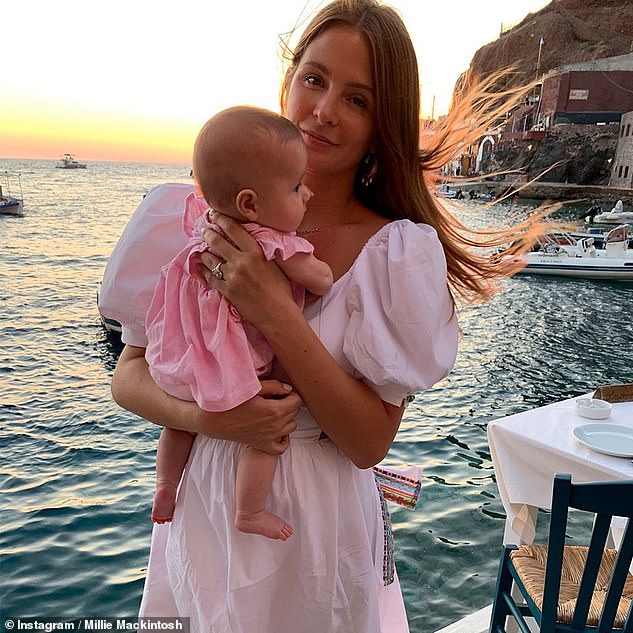 Cute! The TV star has been having a whale of a time in the idyllic holiday hot spot with her little one 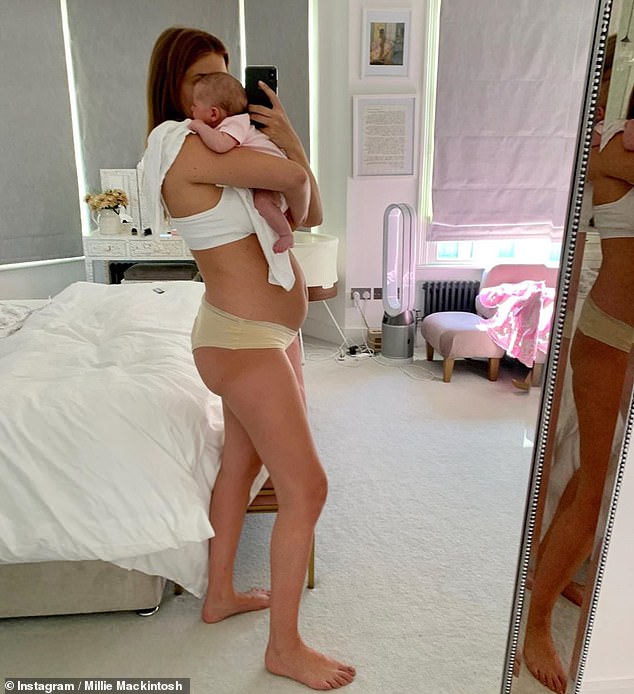 Honest: Earlier this month, the blonde beauty said she is coming to terms with the physical changes to her body since giving birth