A woman who suffered with eczema so severe that it smelled like rotting flesh and left her bedbuond claims she’s cured the skin condition by eating a raw food diet.

Model, Paula Adamczyk, 22, from Taunton, Somerset, switched to a fruitarian diet in 2018 consisting solely of raw fruit and vegetables to cure her eczema – a skin condition which had blighted her since birth.

Born in Krakow, Poland, Paula suffered from a protein intolerance and as a result, was prescribed soya milk as a child; something she believes contributed to her developing eczema from a young age.

Moving to England in 2017 to study beauty therapy, Paula found that her skin condition was only getting worse, and the antihistamines and steroid creams that she had previously used to manage her symptoms were proving to be ineffective against her deteriorating condition. 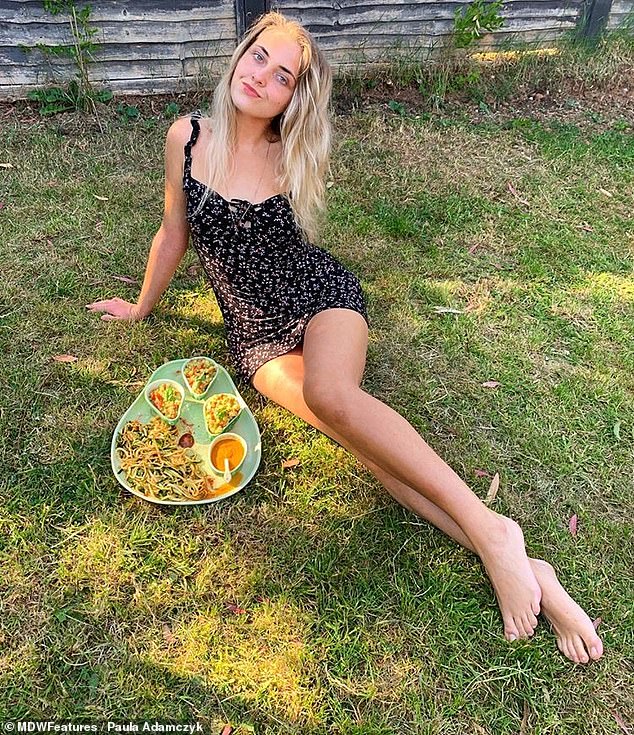 Model, Paula Adamczyk, 22, from Taunton, Somerset, switched to a fruitarian diet in 2018 consisting solely of raw fruit and vegetables to cure her eczema

Paula suffered from eczema that covered her entire body, and the skin condition was so painful she was regularly left bedbound 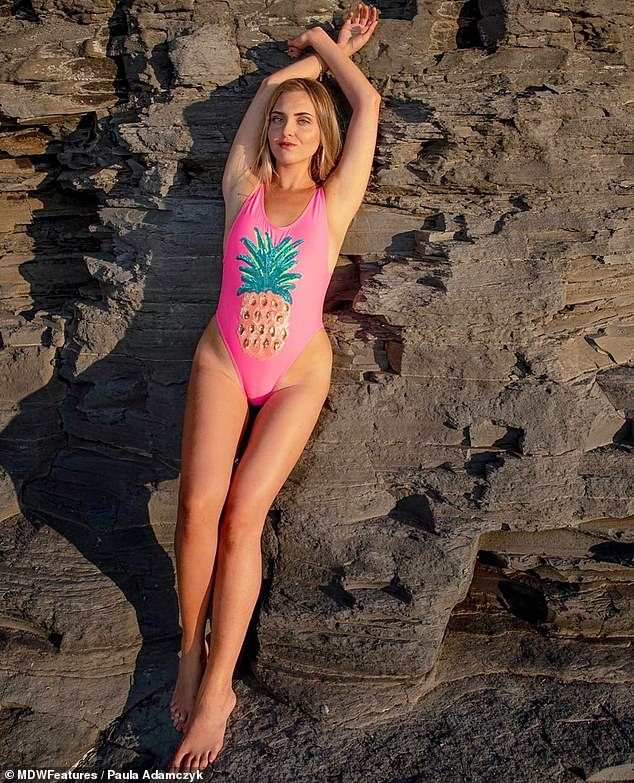 Paula is now a model, a dream that never seemed achievable before due to her skin condition

With her dry skin peeling away, leaving oozing wounds that stung with every movement, Paula spent days on end in bed crying and used food to drown out her sadness.

With nothing to lose, Paula looked for advice on the internet and discovered a vast number of videos and blog posts from people who swore that a raw food diet – consisting primarily of fruit, vegetables, nuts, and seeds – could cure skin complaints like hers.

WHAT IS A FRUITARIAN DIET?

The fruitarian diet – or raw vegan diet – is a restrictive regime in which you omit all meat and dairy and only consume raw fruit and vegetables.

It is adapted differently by each follower, but most ensure that between 55 and 75 per cent of their diet is solely made up of raw fruit.

Others add nuts, seeds and grains.

Though the diet is largely made up of fruits, some add tomatoes, avocado, cucumber and peppers to their meals.

But fruit also contains the natural sugar fructose, which could lead to abdominal discomfort, diarrhoea and bloating in some people.

Moving to a fruitarian diet and cutting out gluten, sugar, and starchy foods – such as potatoes, oils and grains – has cured Paula’s eczema entirely and she has even lost four-stone in the process taking her weight from 13st 2lb to 9st 2lb.

Paula’s new diet consists of exotic fruits including pineapple, passionfruit, and watermelon as well as salads, raw sushi, courgette noodles and avocado. Every morning she drinks a large glass of celery juice – something widely touted as a potential cure for eczema.

‘I have suffered from eczema since birth, with my stronger attacks being treated with antihistamines and steroid creams,’ Paula said.

‘Two years ago, my eczema attacks got worse. I tried taking hot showers to relieve the itching, but nothing seemed to work. The skin was dry and would flake off like snowflakes. My skin was literally everywhere and my sores would then scab over and ooze.

‘I didn’t feel like doing anything so I just lay in bed for hours and cried because every movement hurt me. I was plunging into a deep depression which I drowned out with food. I was desperate and hopeless.

‘I started looking for help on the internet, where I found the profile of a lady who cured her daughter of eczema with a raw food diet. I started reading and watching videos and gradually started to eliminate harmful products from my diet.

‘I began with a vegan, gluten-free and sugar-free diet and then I got rid of mucus-producing food like oils, starches, potatoes and grains. 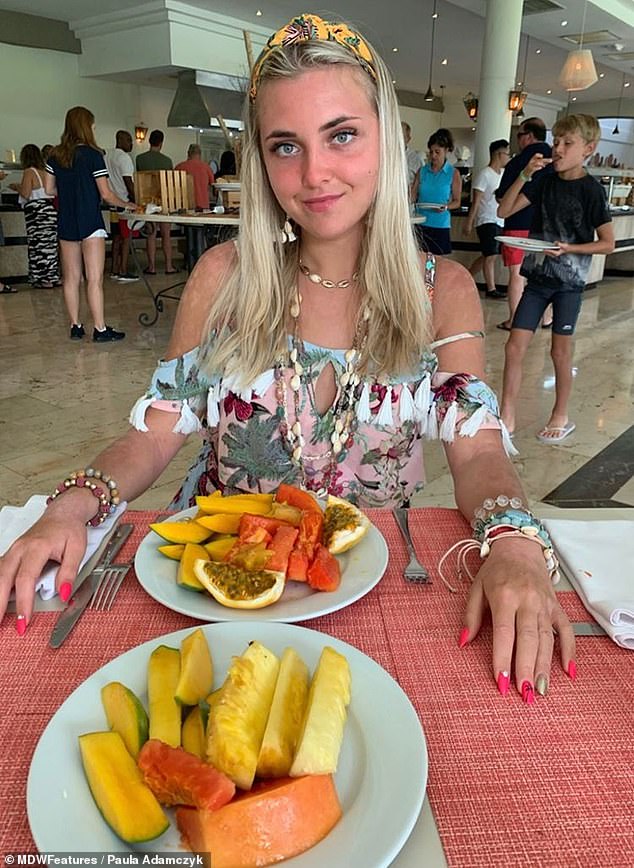 Paula out for a fruit-based lunch, consisting of a plate of pineapple, mango, papaya and passion fruit 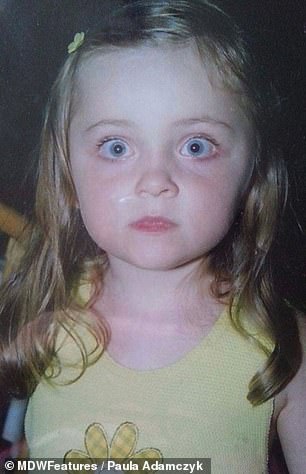 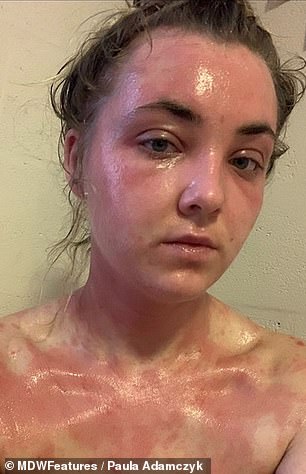 Paula, pictured as a child (left), has suffered with eczema her entire life. The skin condition was so severe that Paula felt like her body was burning 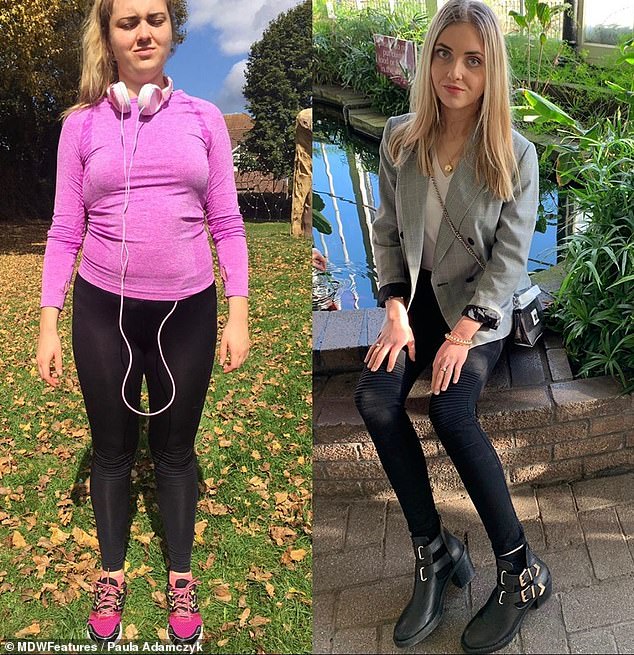 Since embarking on a raw food diet, Paula has more energy than ever and has been able to pursue a career as a model after losing 4st 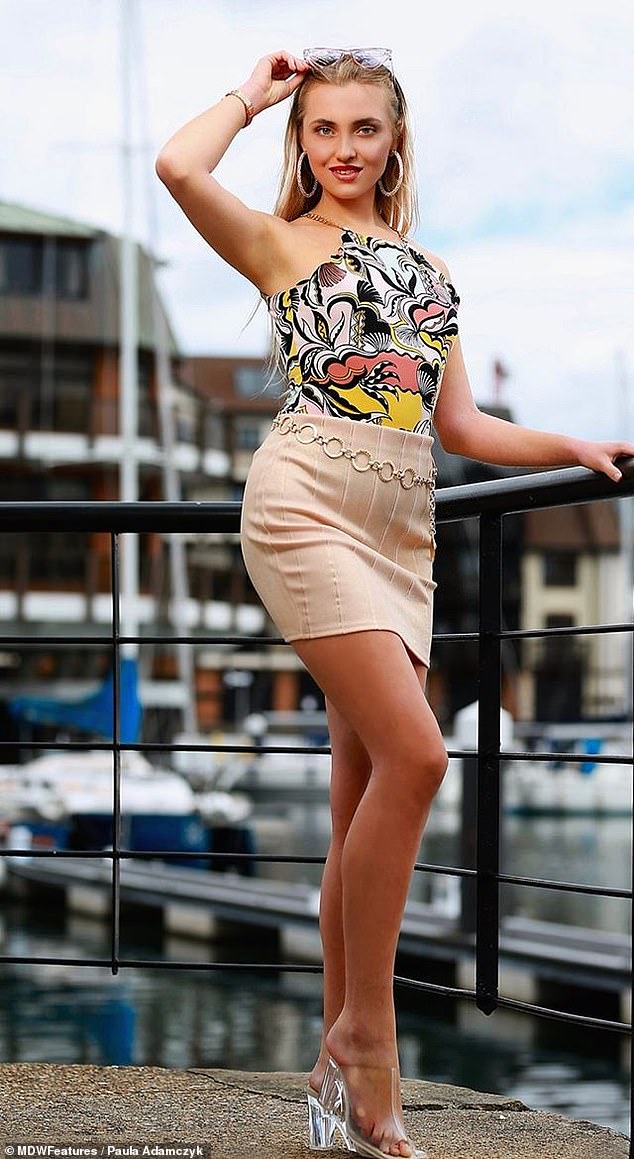 The aspiring model looking glamorous during a photoshoot. She says that she wanted to be a model since childhood, but her skin condition always stood in her way

‘Every morning I drink celery juice, which is the number one treatment for eczema.’

As a result of the drastic changes she has witnessed, Paula has been able to pursue the modelling career that she says always seemed out of reach due to her skin condition and her weight.

Having more energy than she has ever had in her life, alongside a sharper mind and stronger hair and nails, Paula is fully onboard with the fruitarian lifestyle going forward. 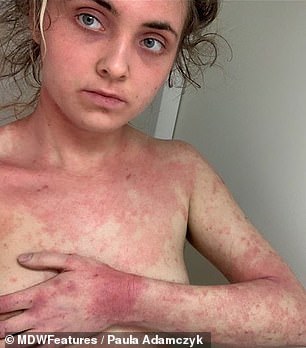 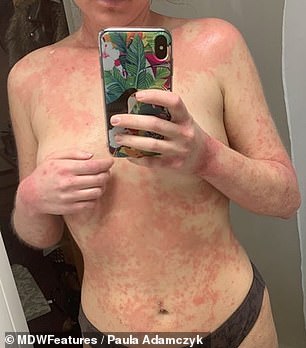 Two years ago, Paula’s eczema attacks got worse and her skin was so dry it would ‘flake off like snowflakes’. She would lie in bed for hours and cry because every movement hurt, leaving her feeling ‘desperate and hopeless’ 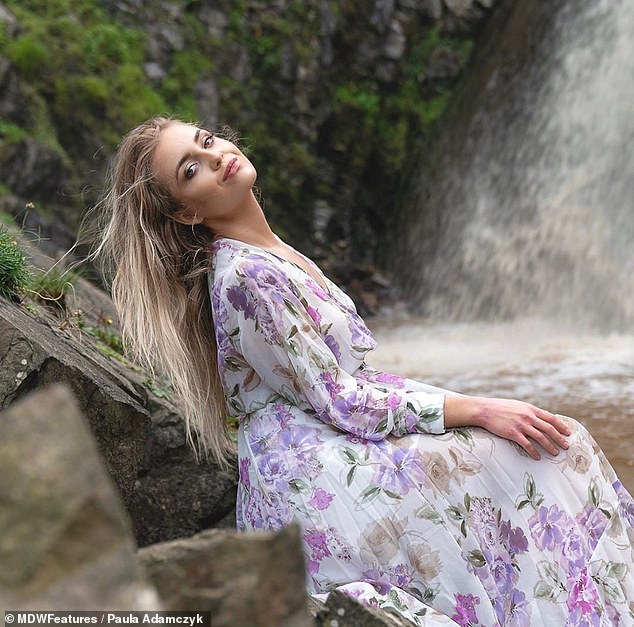 The model (pictured during a shoot) found out about the benefits of a raw food diet while doing online research, after steroids and antihistamines didn’t help 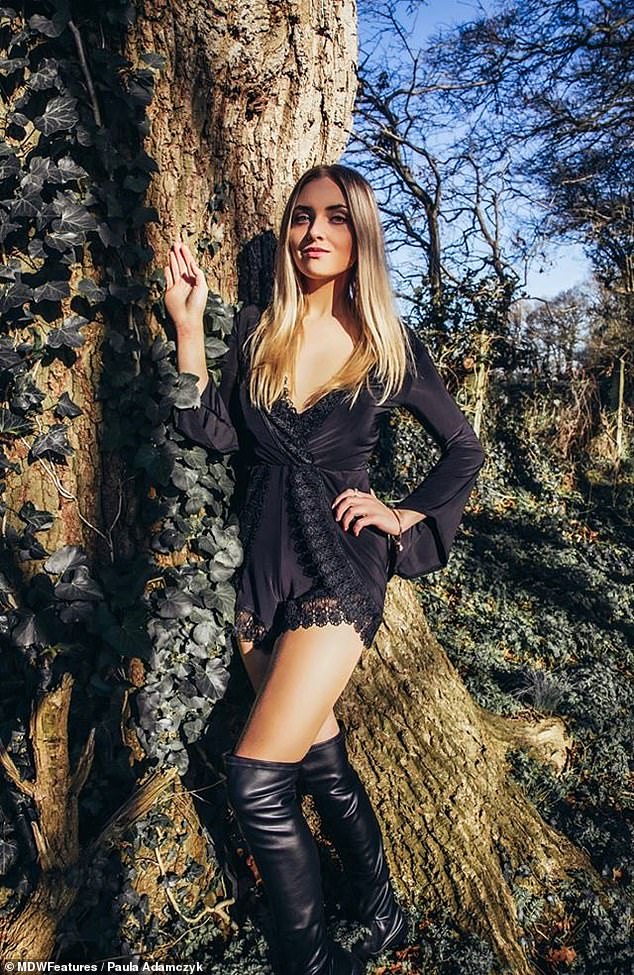 With Paula’s skin completely clear, she has been able to pursue a modelling career (pictured during a shoot)

However, she confesses that it has not been without its challenges, due to the temptation of slipping back into old habits and the lack of restaurants that cater for a raw food diet.

‘I always wanted to become a model since I was a little girl, so it wasn’t a new dream, but having skin problems and being overweight meant that it wasn’t possible before,’ she said.

‘At first I noticed the increase in my energy levels. I am now active throughout the day without an unnecessary reliance on my bed. 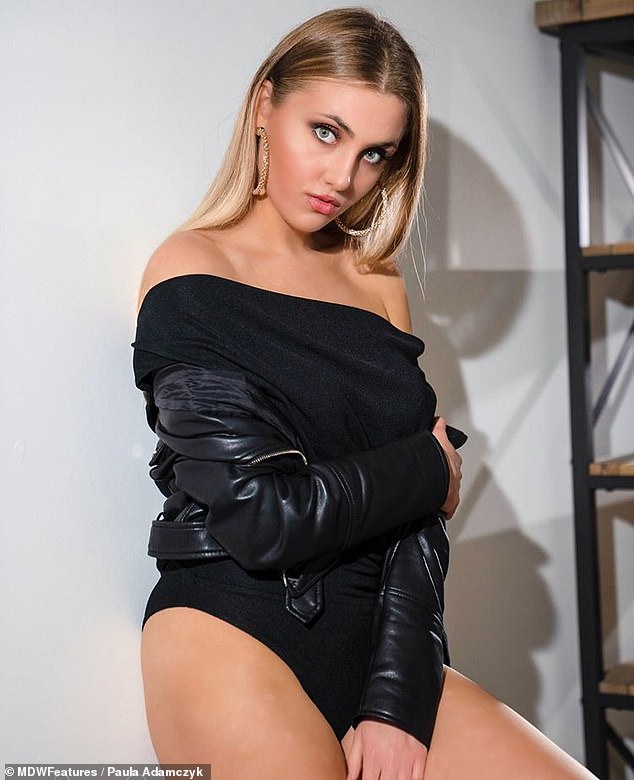 The 22-year-old says that her new diet has completely changed her life, making her feel mentally sharper and physically healthier 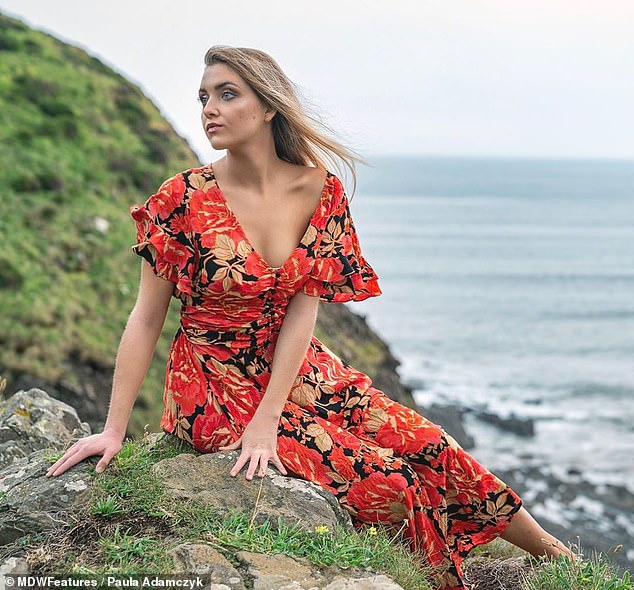 Paula, pictured posing for a modelling shot by the sea, would spent days on end in bed crying and used food to drown out her sadness

‘My mind has become clearer and my senses have sharpened. My nails have got stronger and instead of feeling depressed, I have faith in the future.

‘I even have developed an aversion to television and my desire to be with nature has increased.

‘Going from a traditional diet where I ate a lot of sweets, gluten, and dairy, to suddenly going vegan and now fruitarian was a challenge. I have failed a few times to get to where I am now.

‘There were times when I ate chips and drank beer and one time, I even went to my favourite restaurant and ate everything, including the prawns that I used to love. 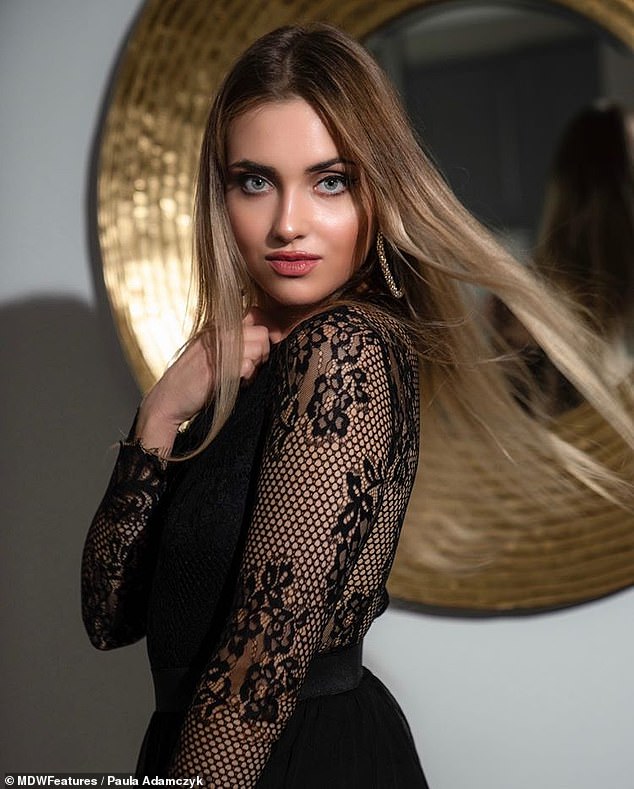 An action shot of Paula modelling. The 22-year-old loves her new lifetsyle but admits it can be hard to find places to eat that cater for her raw food diet 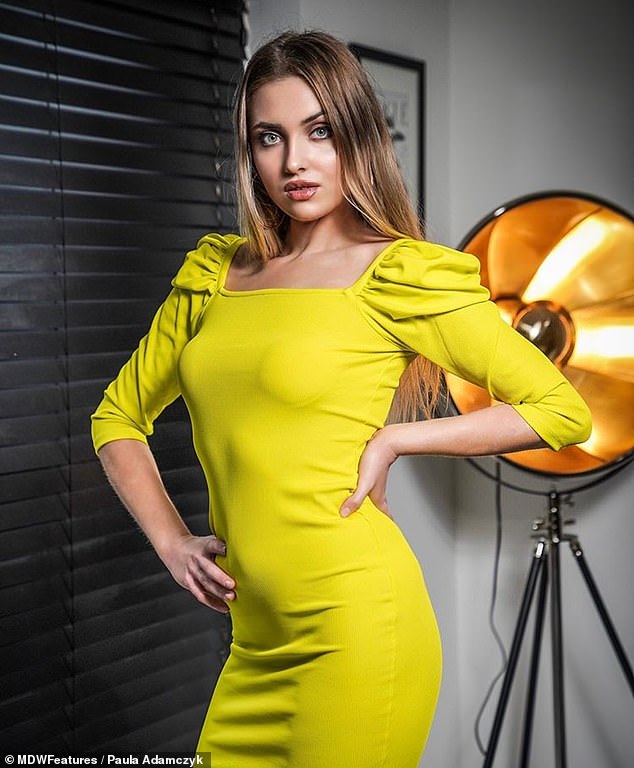 With nothing to lose, Paula looked for advice on the internet and discovered a vast number of videos and blog posts from people who swore that a raw food diet – consisting primarily of fruit, vegetables, nuts, and seeds – could cure skin complaints like hers.

‘It can also be pretty difficult to find good quality vegan restaurants but I feel as though I am at the beginning of the road and there is still a lot ahead of me.

‘My desire to develop is growing and I am constantly learning and developing. Every day I am trying to be a better version of myself.

‘If you decide to start a fruitarian diet, you will probably stick to it for the rest of your life because you won’t like to feel the way you did before.

‘On a fruitarian diet you feel so much energy and happiness.’