This is the shocking moment two police officers come under attack and are forced to defend themselves with pepper spray while trying to make an arrest.

Dramatic footage captured the ugly clashes with officers after they stopped and questioned a man outside a newsagent in Telford, Shropshire, on Tuesday afternoon.

It shows a male and female officer frantically calling for backup as they fight off a frenzied mob of attackers.

West Mercia Police has since charged three men, all aged 18, with seven counts of assaulting an emergency worker.

A 31-year-old woman has also been charged with obstructing police. All four are due to appear in court today.

The force said it will be increasing the number of patrols in the area to reassure the public and vowed attacks on its officers ‘will not be tolerated’. 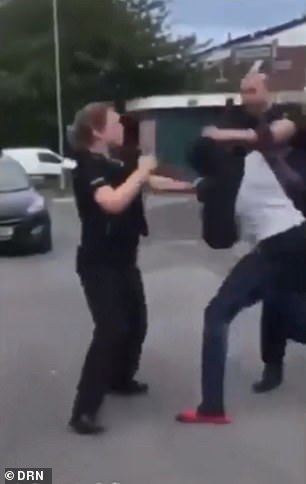 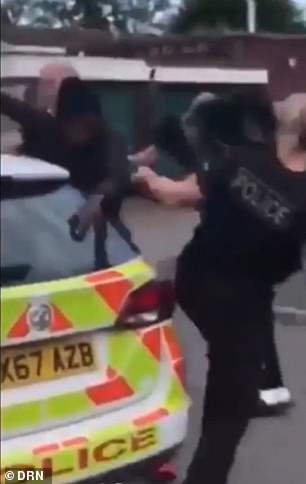 Dramatic footage captured the ugly clashes with officers after they stopped and questioned a man outside a newsagent in Telford, Shropshire, on Tuesday afternoon 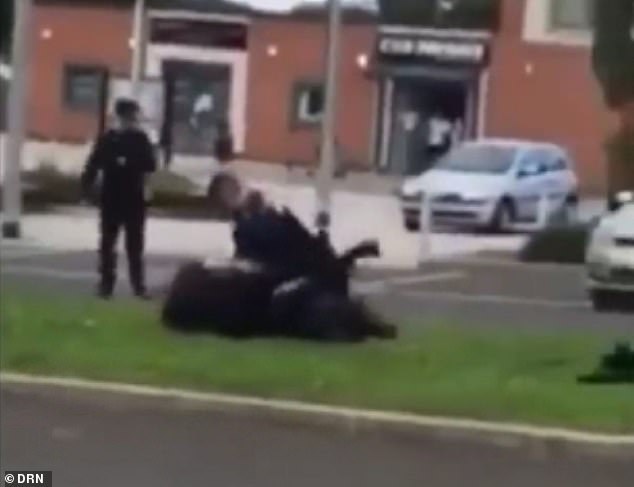 Footage of the incident was posted anonymously on social media yesterday and has been viewed more than 70,000 times.

It shows a male and a female police officer speaking to a man at the side of the road, who tells them: ‘I don’t give a f***. You gonna arrest me? Go on, then.’

They take hold of him and the female officer appears to take out a spray canister, as angry bystanders shout: ‘He hasn’t even done nothing. Why you spraying him?’

As the officers drag the suspect towards their car, they are confronted by a man and a woman who try to stop the arrest.

The female officer orders them to ‘get back’ and appears to spray the man as he advances towards her.

Her colleague warns ‘there’ll be more officers’ as the scene become more chaotic and two male suspects are seen wrestling with police in the street. 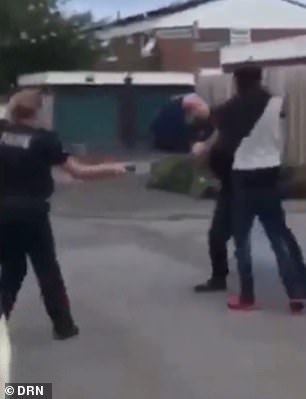 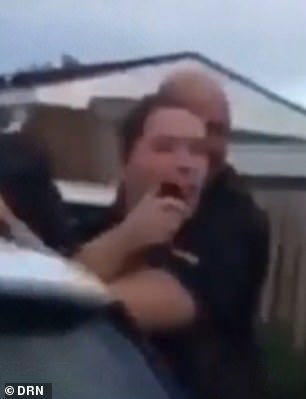 The officers grapple with the mob, before the female PC desperately radios for back-up

One of them then appears to hit the officer in the face, sending his glasses clattering to the ground.

The other suspect – who was previously sprayed – howls in pain as he clutches his face, unable to see, and is heard furiously thumping the police car.

Meanwhile, backup arrives and several officers are seen tackling the other man to the ground before quickly subduing him.

‘My colleagues were on patrol, keeping the community safe – we do not come to work to be assaulted.

‘This type of behaviour will not be tolerated in Telford and we will be increasing the number of uniformed patrols in the area.

‘This was undoubtedly a very distressing incident for anyone who witnessed it and I am pleased we made four arrests, having gained control of the incident quickly.

‘Our staff are committed to keeping the public safe and these events will not deter police from patrolling the area and continuing to do their jobs.

‘All our officers are dedicated to their roles and we will continue to engage with the communities we serve and be there when they are in need.’