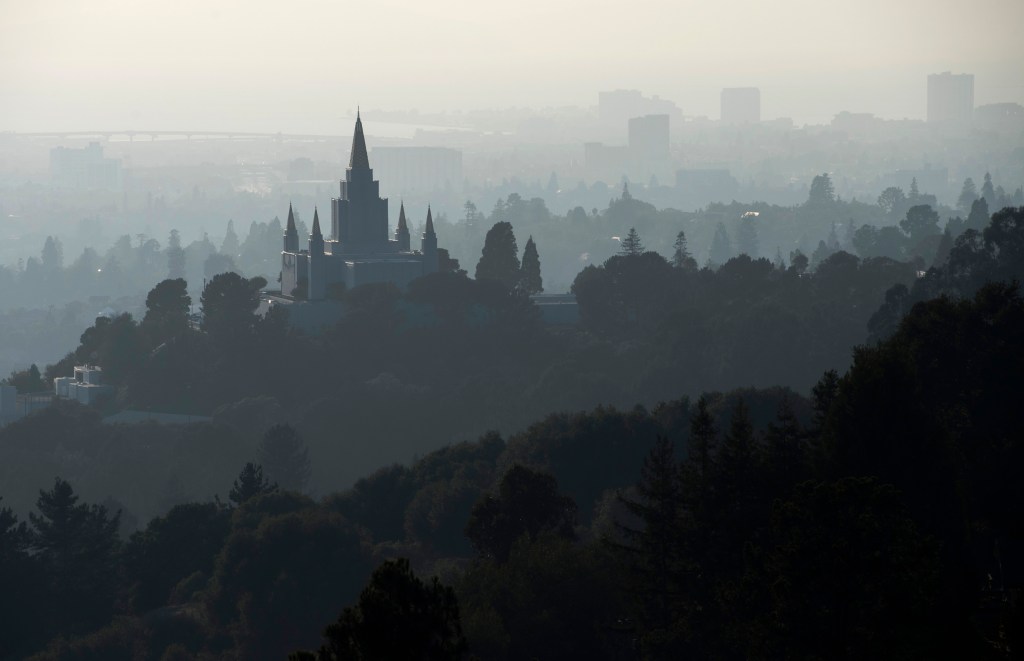 CLICK HERE if you’re having a problem viewing the photos on a mobile device.

The heat wave blanketing the Bay Area is expected to break records in an array of cities Monday, but those falling milestones won’t be as plentiful as they were Sunday, according to forecasters.

Temperatures were expected to taper off beginning on Monday and into Tuesday. But for the rest of the week, that relief will be exchanged for elevated fire risk thanks to offshore winds and extremely low humidity, compounded by poor air quality that’s expected to worsen Monday night as wildfires continue to burn to both the north and south of the region.

Incidentally, smoke is a primary factor that could actually make the day less sweltering than predicted.

“What may throw a wrench into all that is all the smoke we’re seeing across the region from the Creek Fire and Red Salmon Fire,” said Drew Peterson, a meteorologist with the National Weather Service’s San Francisco Bay Area station. “Smoke is such a nebulous thing, and is hard to forecast, but it’s likely to reduce temperatures slightly.”

With the current heat, plus humidity in the Bay Area that’s expected to remain in the single digits percentage-wise, state officials are responding to the threat of new fires by dispatching resources to eight California counties. In a news release, the California Office of Emergency Services announced that Contra Costa and Marin counties will be bolstered with OES firefighting personnel and equipment including a strike team, water tenders, fire engines and a dozer unit.

California ISO, the agency that oversees the state’s power grid, is continuing to advise a Flex Alert for residents, urging them to voluntarily conserve their use of high-wattage appliances like air conditioners from 3 to 9 p.m. Monday. On Sunday, ISO had warned of rotating outages in the evening but lifted that warning within about two hours.

But if official outages were averted, some Bay Area residents were puzzled as they literally found themselves left in the dark. Some Los Altos-area residents reporting having their power cut off between 8 and 9:30 p.m. PG&E had issued an alert Sunday for residents in 18 counties to brace for potential power shut-offs over the next couple of days — including Napa and Sonoma counties — but Santa Clara County was not among them.

Residents at the Sahara Mobile Village in Mountain View similarly reported being without power Sunday and Monday amid the stifling heat. A message to PG&E about what happened to these groups of residents was not immediately returned Monday.

As of 10 a.m. Monday, power usage was hemming closely to the agency’s hourly forecasts, and was trending lower than what officials \were expecting earlier in the week. But ISO officials are keeping a watchful eye on the late afternoon, when they anticipate that electricity use could surpass 90 percent of the system’s approximately 50,000-megawatt capacity from solar, wind and conventional energy production.

Starting Tuesday, forecasters expect temperatures to drop between five and 15 degrees through the week, with the most relief happening along the coastline.

“It’s still going to be relatively warm inland, but we’re expecting the marine layer to regenerate coming up through midweek,” Peterson said.

That’s while smoke continues to make its way to the Bay Area from the Creek Fire, in the Sierra National Forest, which has burned about 79,000 acres northeast of Fresno and was 0% contained as of 10 a.m. Monday. The region is also taking smoke from the far reaches of Northern California, with the Red Salmon Complex Fire in the Trinity National Forest near where Humboldt, Siskiyou and Trinity counties meet.

“A lot of smoke we’re seeing generated in northwest California, a lot of that smoke is going to stream directly into the Bay Area this evening,” Peterson said. “It would not surprise me if we move into the very unhealthy range for all populations. Smoke will definitely be thickening up until this evening, and will definitely be permeating through overnight.”

Check back for updates to this story.