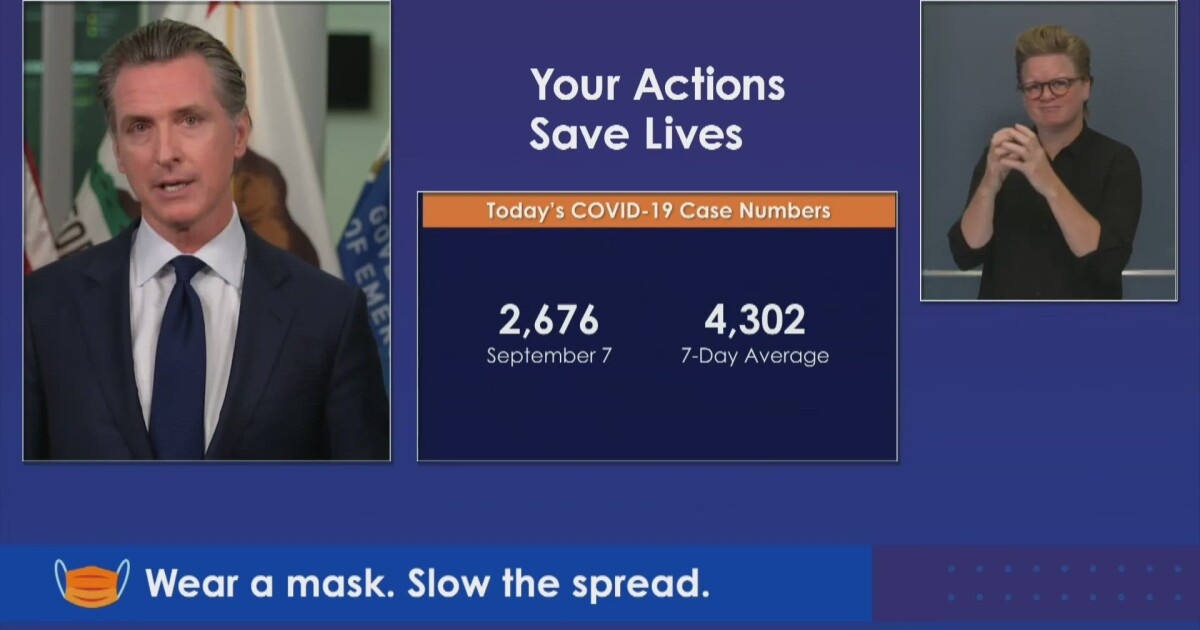 The continuing statewide decline in new coronavirus cases will allow five additional California counties to accelerate the reopening of their economies, putting them a step closer to possible in-classroom learning at schools, under Gov. Gavin Newsom’s retooled effort for easing restrictions on communities.

The Newsom administration on Tuesday announced that COVID-19 conditions have improved enough in Orange, Santa Clara, Santa Cruz, Placer and Amador counties to move them to the second tier of California’s four-tier reopening plan.

The change would allow many businesses and services to partially reopen, including restaurants to serve customers indoors, places of worship to hold in-person services and movie theaters to operate — but only at 25% capacity.

Newsom said COVID-19 related hospitalizations across the state have dropped by nearly 24% over the past two weeks. Of the Californians who have been tested over that same time frame, 4.3% were positive. That’s down from 5.3% on Sept. 1 and 6.3% in mid-August. The number of confirmed daily new cases also has been on the decline.

“If those appear to be more promising numbers, it’s because they are,” Newsom said during his briefing on Tuesday.

Still, he cautioned Californians not to be complacent, especially after a three-day Labor Day weekend and record heat wave in portions of the state. California experienced surges in transmission of the virus after the Memorial Day and Fourth of July weekends, which saw more people flocking to beaches and gatherings with friends and family.

“Three-day holiday weekends have not been advantageous in terms of the mitigation of the spread of this virus,” Newsom said. “As a consequence, we’re very cautious in terms of our approach as we move forward. We’re going to hold the line in terms of the approach we laid out in partnership with counties up and down the state.”

On Aug. 28, Newsom announced a new four-tier reopening plan that requires counties to show consistent success in stemming the transmission of the coronavirus before allowing businesses greater flexibility to reopen and group activities to resume.

Newsom vowed to take a more cautious and stringent approach than his first reopening effort in the spring, when his decision to rapidly ease restrictions led to such a major surge in cases that he ordered another statewide shutdown.

Even with the changes announced on Tuesday, 33 of California’s 58 counties remain on the state’s most restrictive tier, indicating “widespread” virus transmission. Restaurant dining, religious services, gyms and fitness centers, movie theaters and museums will remain restricted to outdoors only in those areas.

San Diego is the only county is Southern California that was elevated to the second tier, classified as having “substantial” virus transmission. Newsom said that seven additional counties in the state may be moved to the second tier next week, although administration officials did not name them.

Currently, there are 14 counties in the “substantial” second tier. A total of 11 counties are in the least restrictive tiers, which are classified as having moderate or minimal transmission.

The new rules also provide a new pathway toward the partial reopening of schools in some communities.

School officials in the 25 counties listed in the state’s new structure as having “substantial,” “moderate” or “minimal” virus transmission will be able to offer limited in-person instruction on school campuses once those counties maintain that status for at least 14 days. Counties with even fewer incidences of confirmed coronavirus cases and lower test positivity rates could allow students to return to campus part-time even earlier.