A mother has documented her three-year-old son’s naughty antics in pictures that are both hilarious and hair-raising.

From smashing beloved mugs, smearing toothpaste on furniture, to chucking crisps and cereal all over the floor, little Romeo, three, has done everything to become a parent’s worst nightmare.

The cheeky tot, from Torquay, Devon, then blames his mishaps on the family dog, before his exhausted mother Steffi Rox, 37, discovers the mess left behind. 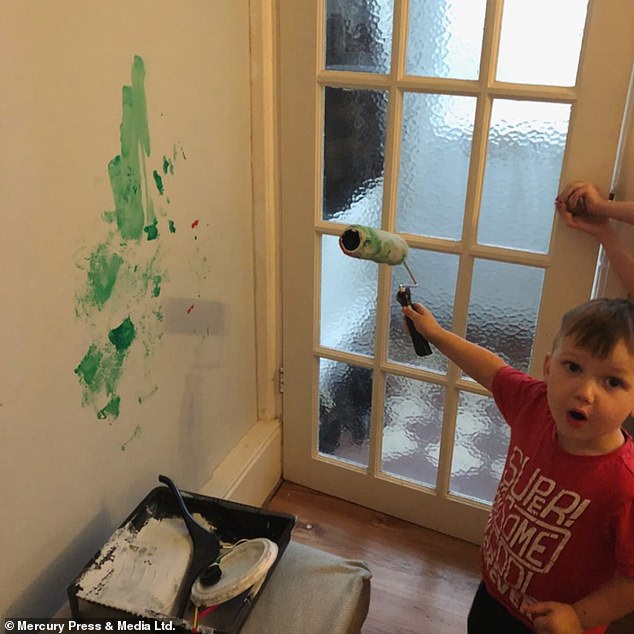 Cheeky little Romeo, three, has been documented by his mother getting into all sorts of disasters at their home in Torquay, Devon. Here he is pictured giving the freshly-painted grey living room wall a lick of green poster paint 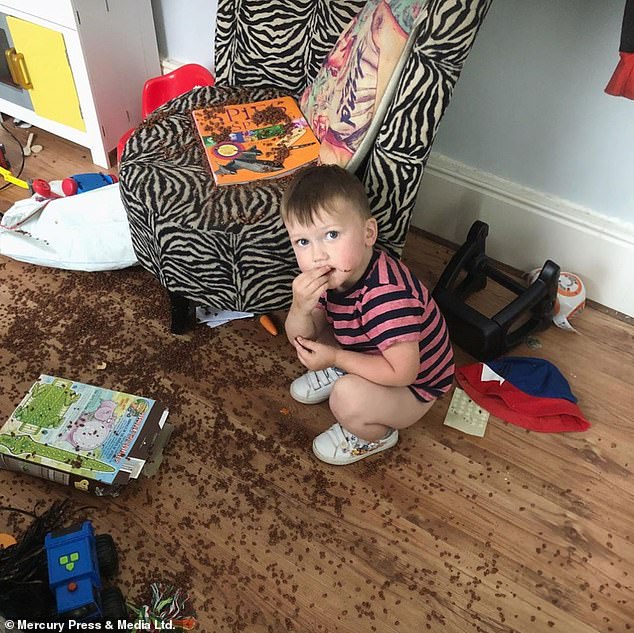 The destructive tot has been described by his mother Steffi Rox, 37, as a ‘walking tornado’. Pictured eating what appears to be chocolate cereal that he has spilled on the floor 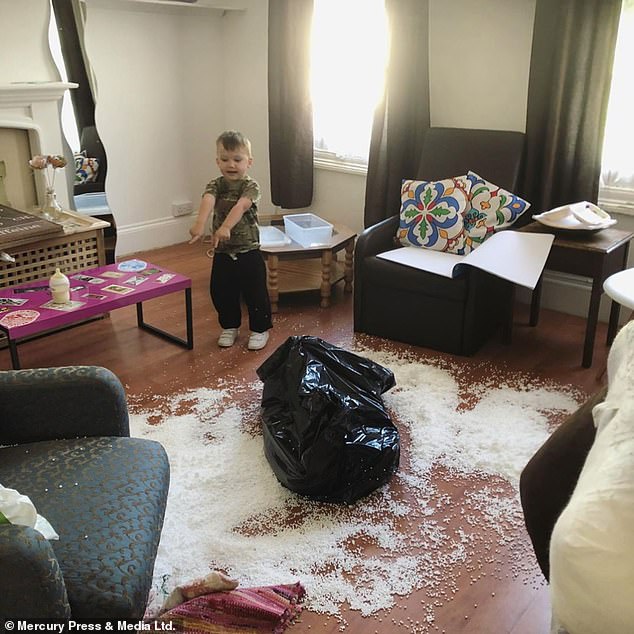 No household item is safe around three-year-old Romeo, with his tendency to be destructive without even trying. Pictured surrounded by white polystyrene balls – most likely from an exploded beanbag chair 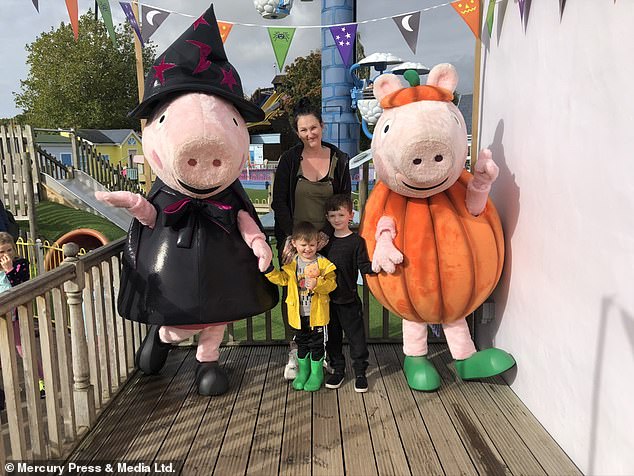 Mother Steffi, pictured with sons Romeo, three, (left) and Brody, 8, with Peppa Pig characters, says her sons are completely different – describing her eldest Brody as ‘so calm and chilled’

But, after laughing it all off, the mother-of-two posts hilarious pictures and videos of her son’s destruction to share with parents of other small children who can relate.

Steffi, a community organisation director, said: ‘From day one, we were told Romeo was the biggest baby born in Torbay in 10 years, and he’s just been a whirlwind ever since.

‘My eldest child Brody, eight, is so chilled and calm whereas Romeo is like a walking tornado.

‘He learns through doing things, for example realising some objects break if you throw them across the room – I don’t even realise something is breakable until he touches it. 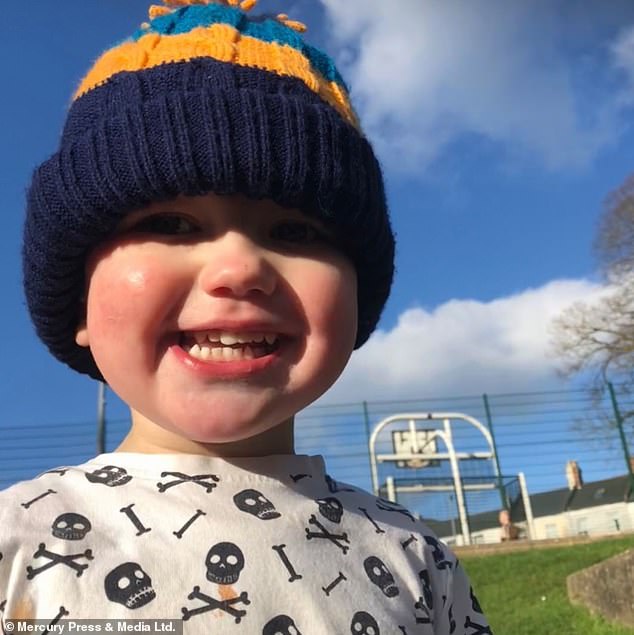 Romeo will often blame their family dog Freddie for the mess he makes before he eventually says sorry. His mother says he is very hard to stay angry at because he is so cute with it 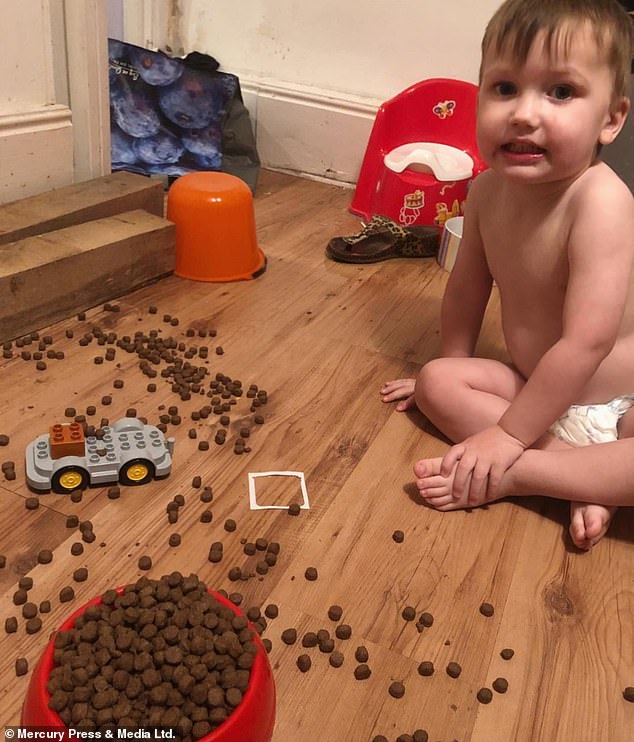 Even the dog food bowl is not off limits, with fearless Romeo playing around with the pet’s biscuits. His mother laughs off his antics and shares pictures for other parents who can relate to what she goes through 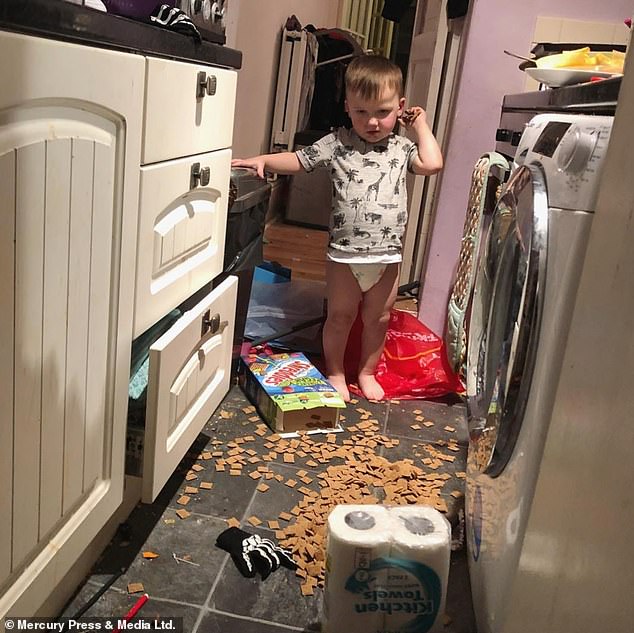 Another box of cereal meets the floor with a far from innocent looking Romero stood in amongst the chaos. Steffi said from day one Romeo was a whirlwind – being crowned the biggest baby to be born in Torbay, Devon, for ten years

‘He blames our dog, Freddie, for everything but the poor dog hasn’t even done anything.’

Steffi started sharing her son’s numerous disasters on Instagram and nearly has 1,000 followers admiring his antics.

‘It blows my mind how he can get the whole house covered in cereal or wet wipes,’ she said. 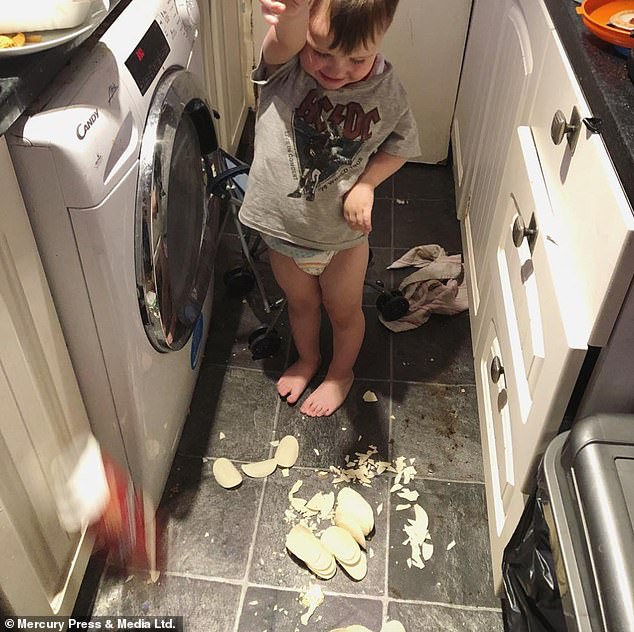 Steffi says Romeo – pictured after throwing crisps on the floor – learns through doing things: ‘For example realising some objects break if you throw them across the room – I don’t even realise something is breakable until he touches it.’ 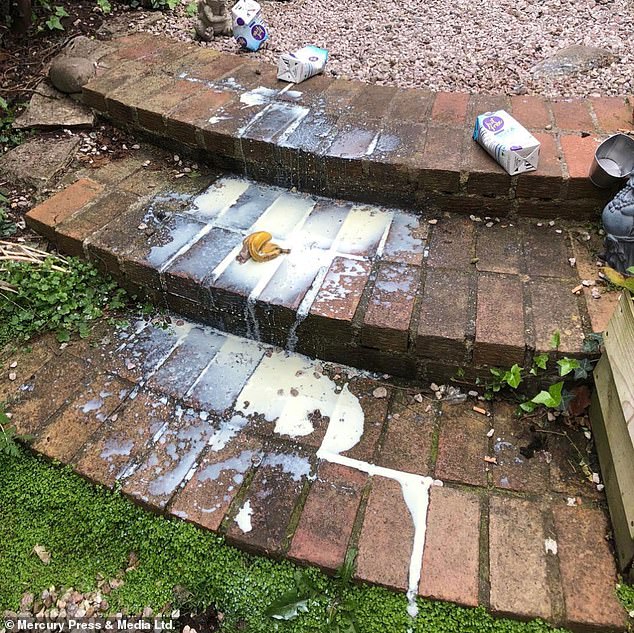 No use crying over spilt milk: Steffi always tries to see the funny side of her son Romeo’s antic, including spilling milk down the steps in their garden and throwing a banana skin on top for good measure 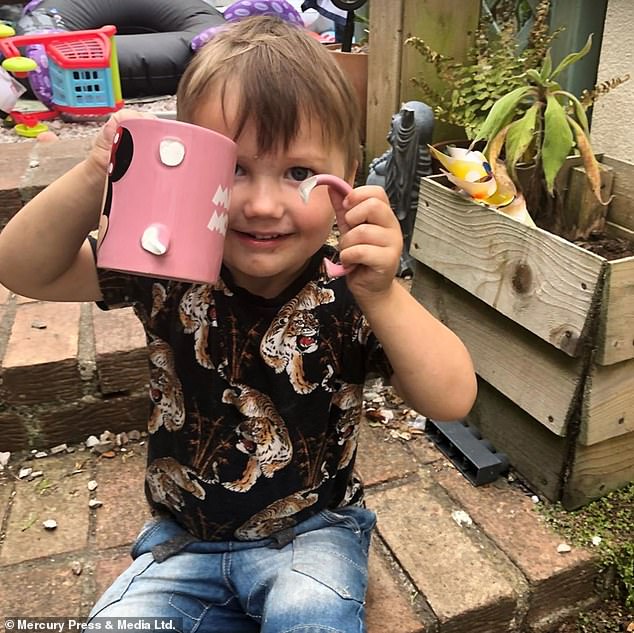 Another one bites the dust: As well as painting walls and destroying furniture, Romeo has a tendency to smash mugs

‘I didn’t have this wave of destruction with my other child so I find it quite funny putting the pictures together and looking back at what Romeo has done.’

She said: ‘He’s very apologetic and says sorry when he’s broken something – he’s very cute with it so it’s hard to be mad at him. 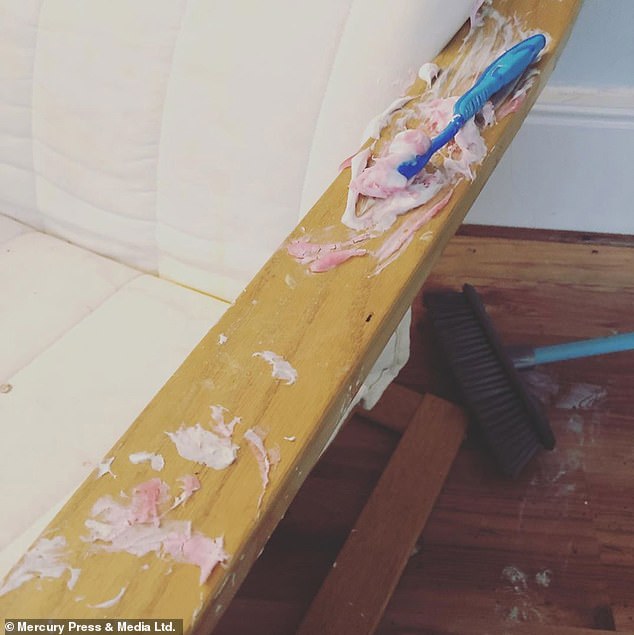 The mother-of-two says she did not have the same ‘wave of destruction’ with her son Brody, eight. Pictured: Romeo tells his mother he has been helping her clean up, by smearing toothpaste all over the furniture 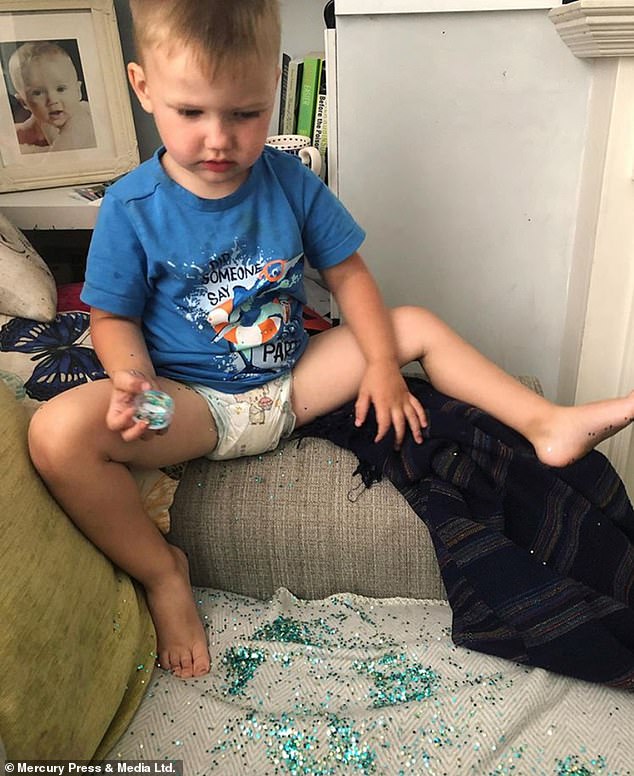 Rookie error: Steffi left out some face glitter for a festival the family were going to and did not make sure it was out of reach of Romeo, who of course managed to spill it all over the sofa 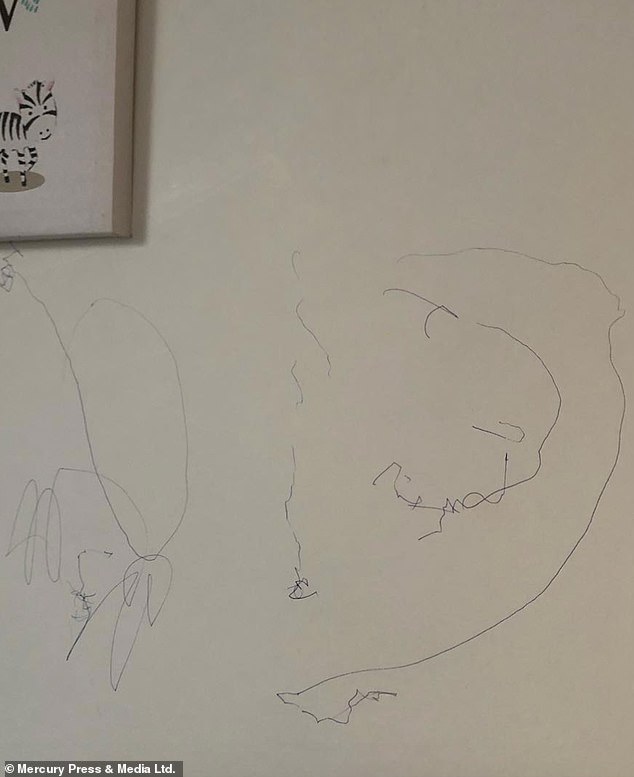 As well as painting on the walls, Romeo has also been known to flex his artistic skills by taking a biro to the walls in their family home and creating a masterpiece – much to his mother’s horror

‘I’m still waiting for him to cake himself in Sudocrem at some point but he seems to have skipped that stage and gone on to do more destructive things.’

After Steffi began posting her photographic journey through Romeo’s path of destruction, the account began gaining hundreds of followers – something which she didn’t expect.

Steffi added: ‘Brody has just started an Instagram to document his fishing hobby and he’s very upset that he’s doing a lovely sport and got no followers but Romeo’s page almost has 1,000. 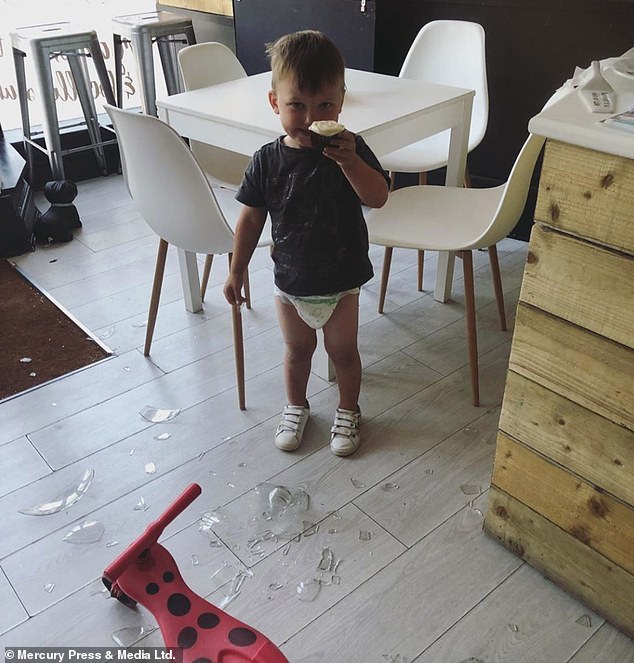 He may be surrounded by smashed shards of glass but Romeo is more than happy posing in the chaos with his cupcake. Steffi has gained nearly 1,000 followers since she started posting his hilarious disasters 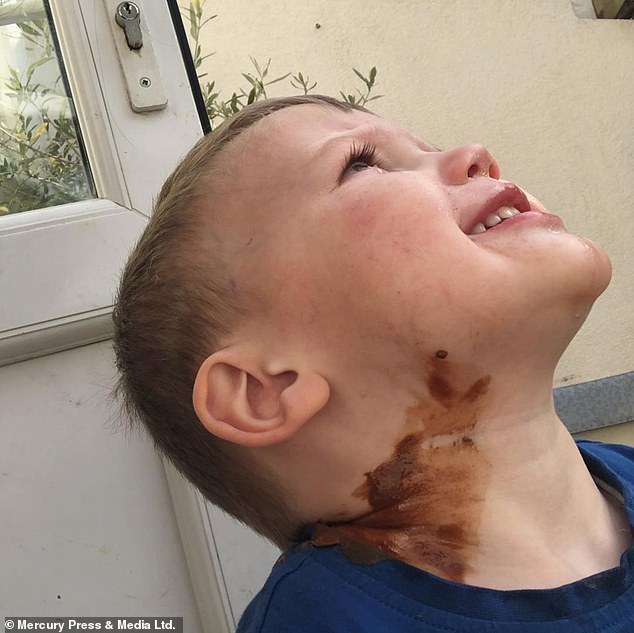 Steffi says she hopes to embarrass her son Romeo, pictured with melted chocolate down the side of his neck, when he is older by showing him all the pictures and videos of how untidy he made her house

‘There’s a lot of comments from other mums who say that they’ve been in similar situations to me and they’re very understanding.

‘It’s just something that other parents can relate to and laugh about in retrospect – it’s all a bit of fun.

‘I’m hoping to embarrass Romeo with the pictures and videos when he’s 18 and show him how untidy he made the house when he was little.’