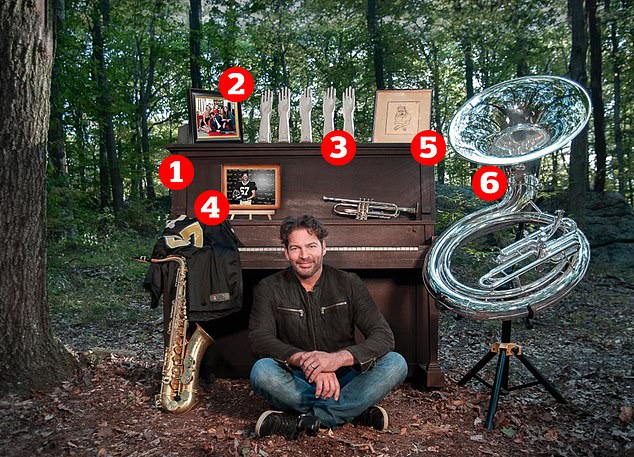 Harry Connick JR, 53, (pictured) who is an actor, singer and composer, shared items of significance outside his house in upstate New York

I can work anywhere and I like being outside, so occasionally I put this old piano out into the woods at the back of my house. The piano is my favourite instrument and it’s the heart and soul of what I do.

I’m constantly playing around with ideas and I practise so much that my hands are always ready to go. I always write my lyrics first – I find that it’s easier to mould the melodies around that.

This picture was taken on the Hollywood Walk of Fame with my actress wife Jill [Goodacre] and daughters Georgia, Kate and Charlotte the day I got a star.

I met Jill when I was 22 and was infatuated with her, but we took our time and got to know each other before getting married in 1994 when I was 26.

I discovered these ceramic glove moulds in the back of a venue I was playing. They dip them in latex to make rubber gloves. As a piano player, I thought they looked cool because they were all hands. 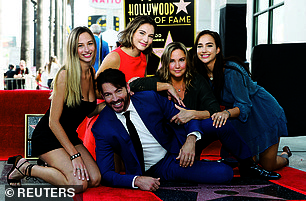 Harry treasures this photograph taken on the Hollywood Walk of Fame. Pictured: Harry with his wife Jill Goodacre and daughters

Over the years I’ve continued to collect them and I try to find ones that are a little bit unusual, mainly from the 1940s and 1950s – they have a different shine that’s a little richer than the newer ones. They look great all together on a surface.

I’m originally from New Orleans and love the city’s American football team, the New Orleans Saints. They were formed the year I was born so I have a real feeling for them.

I enjoy going to see them play when I can, and if I’m not there we like to gather on Sundays as a family and watch them on TV.

I would do anything for the team. I’ve sung at the Super Bowl [the finale of the American football season] before – what would really be amazing would be to perform at the Super Bowl when the Saints are actually playing.

This is a sketch of an old man that my mother did before I was born. She was a lawyer but loved drawing. She was the best mother – so empowering, smart and understanding.

I was only 13 when she died but she was by far the most profound influence on me. When she died I slipped into a very dark place and only time, family support and prayer got me through it.

This enormous sousaphone was a present from my manager. I’d been looking for one for a long time and I needed it for a particular recording – and she surprised me.

You carry the sousaphone around your neck so it’s good for marching bands, and it’s used a lot in New Orleans. I still play it, along with the saxophone and trumpet I’ve had for more than ten years.

As told to Chrissy Iley. Harry’s album True Love: A Celebration Of Cole Porter is out now on Decca.