She has displayed her impeccable work wardrobe time and again.

And Myleene Klass delivered another flawless look as she made her way to Global Radio studios in central London on Wednesday morning.

The broadcaster, 42, turned heads in an eye-catching black and white spotted dress as she headed inside to present her Smooth FM show. 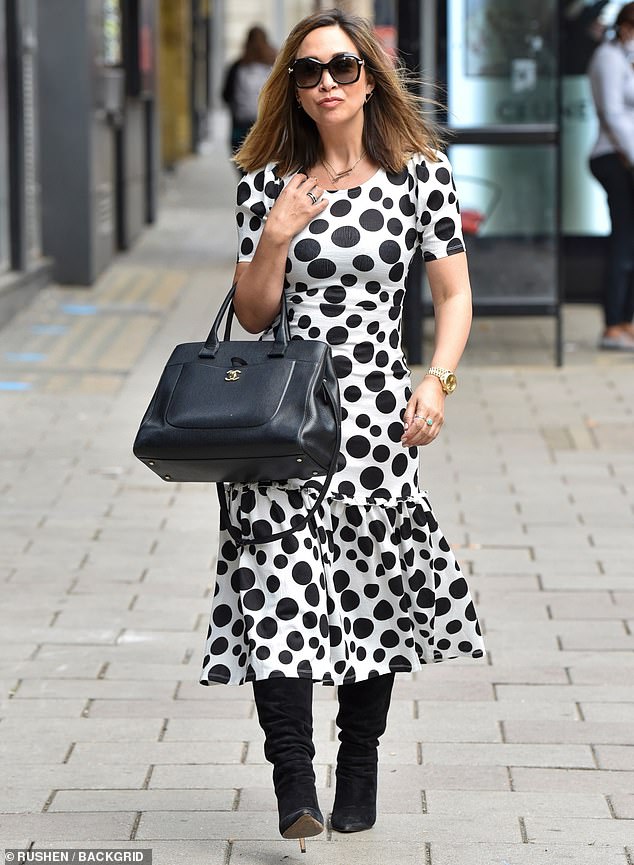 Hard to miss: Myleene Klass delivered another flawless look in a figure-hugging midi dress as she made her way to Global Radio studios for work in central London on Wednesday morning

The TV and radio presenter put her love for Chanel on full display with a classic designer leather tote bag with the gold ‘CC’ logo emblazoned on the front.

Myleene also highlighted her incredible figure with the spotted dress that featured a frilled hem and puffed sleeves.

The mother-of-three protected her eyes from the September sun with a pair of black oversized shades.

She styled her caramel tresses in a sleek bob and opted for a natural make-up look that highlighted her radiant glow. 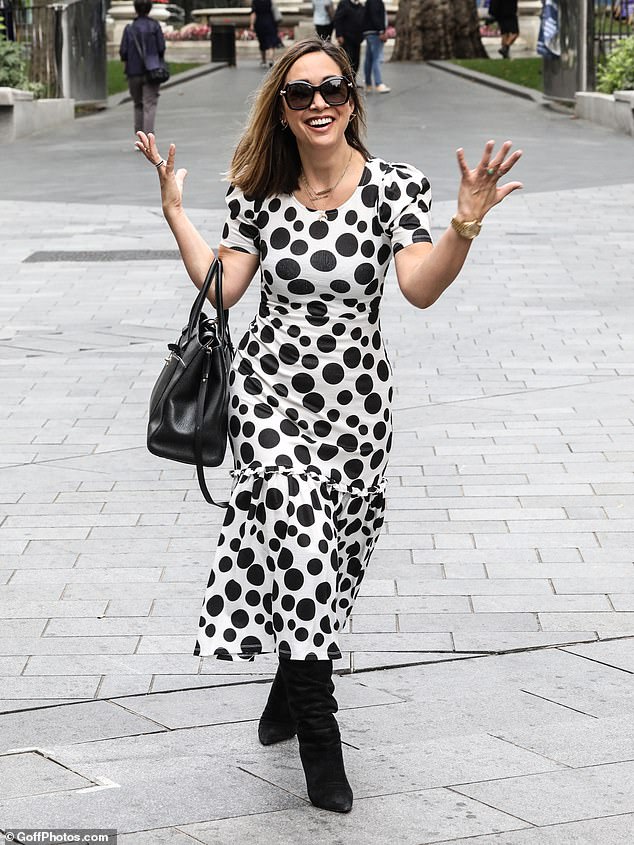 Monochrome look:  The broadcaster, 42, turned heads in the eye catching black and white spotted dress and suede black heels as she headed inside to present her Smooth FM show

For the finishing touches, Myleene wore an eclectic selection of necklaces, rings, and a gold Rolex watch.

The former pop singer opted for a pair of stylish suede boots as she made her way inside the broadcast building.

Myleene’s latest appearance came after her recent social media run-in with a troll who claimed her boyfriend Simon Motson will cheat on her.

Striking: The broadcaster stood out from the crowd in her dashing midi dress which featured a speckled black spotted pattern, a frilled hemline and puffed sleeves 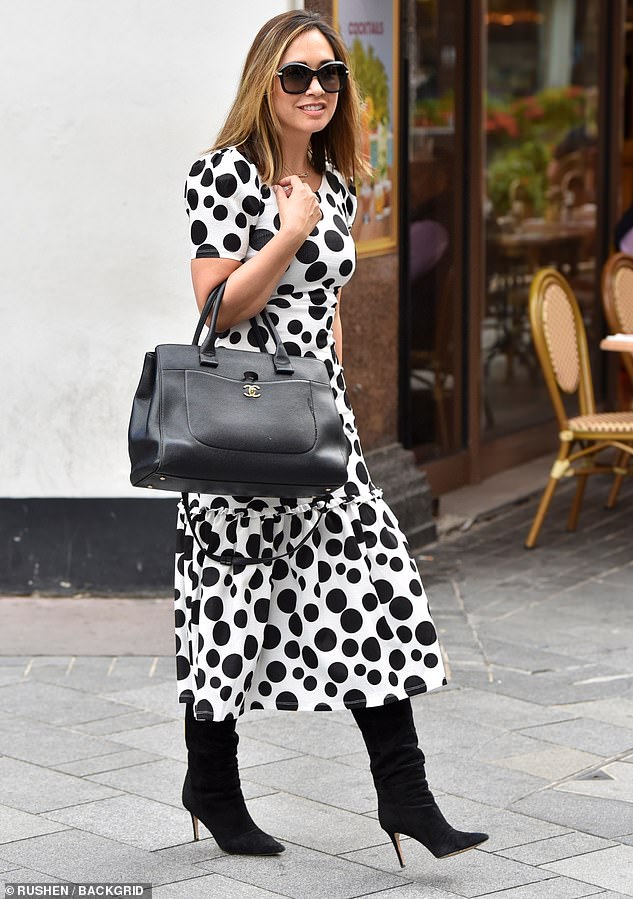 Flawless: Myleene styled her caramel tresses in a sleek bob, while protecting her eyes with a pair of oversized shades

The presenter recently posted a gallery of images with the PR executive, 45, to celebrate their five year anniversary as a couple.

However a troll wrote underneath: ‘Not long before this one cheats on you. Dear oh dear, heading for the lawyers are we?’

In a pointed response, she fired back: ‘He wishes! Cheating exes usually get a house, a car and a fat pay-off.’

It appeared to be a dig at her ex-husband Graham Quinn, who left her on her 34th birthday in 2012. 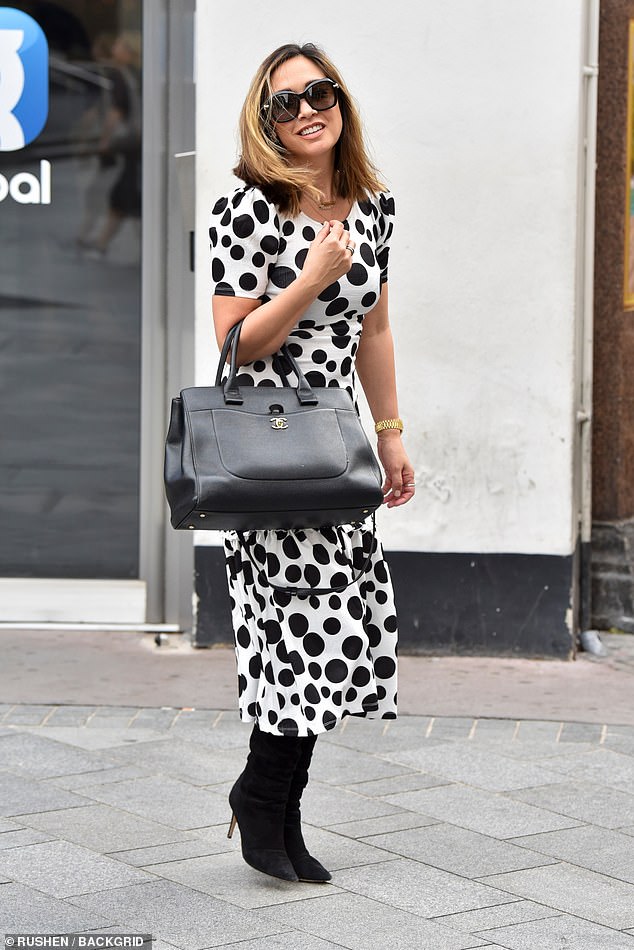 Looking good: Myleene’s latest appearance came after her recent social media run-in with a troll who claimed her boyfriend Simon Motson will cheat on her 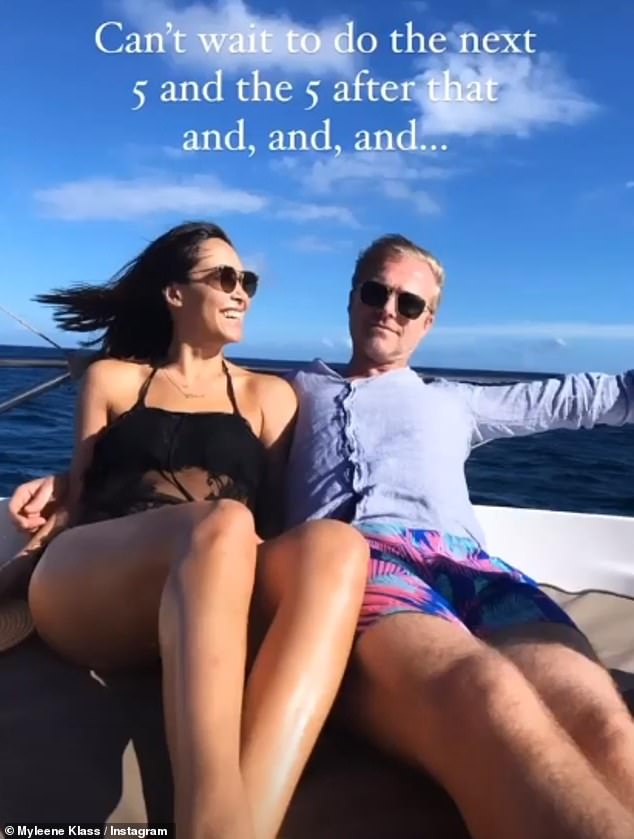 Fire back: The star recently celebrated her five year anniversary with her PR executive beau, 45, and shut down claims that he has cheated on her in a pointed social media response

The incident came just six months after the couple’s wedding, but they had been together for 11 years after meeting when Graham became the bodyguard for defunct pop group Hear’Say.

Myleene, who shares daughters, Ava, 13, and Hero, nine with Graham, was devastated to learn that he had secretly bought a bachelor pad for himself – meaning that he must have been planning his departure for some time.

The presenter is now in a happy relationship with Simon, who she began dating in 2015 after being introduced by two mutual friends. 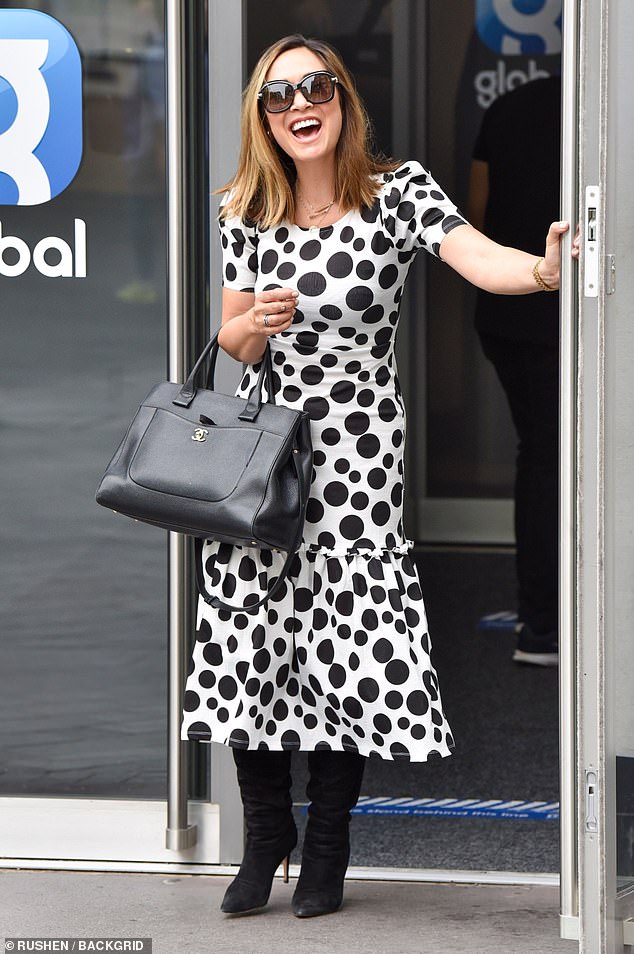 In love: The presenter began dating Simon in 2015 after being introduced by two mutual friends, and the pair welcomed their first child together, son Apollo, in August last year