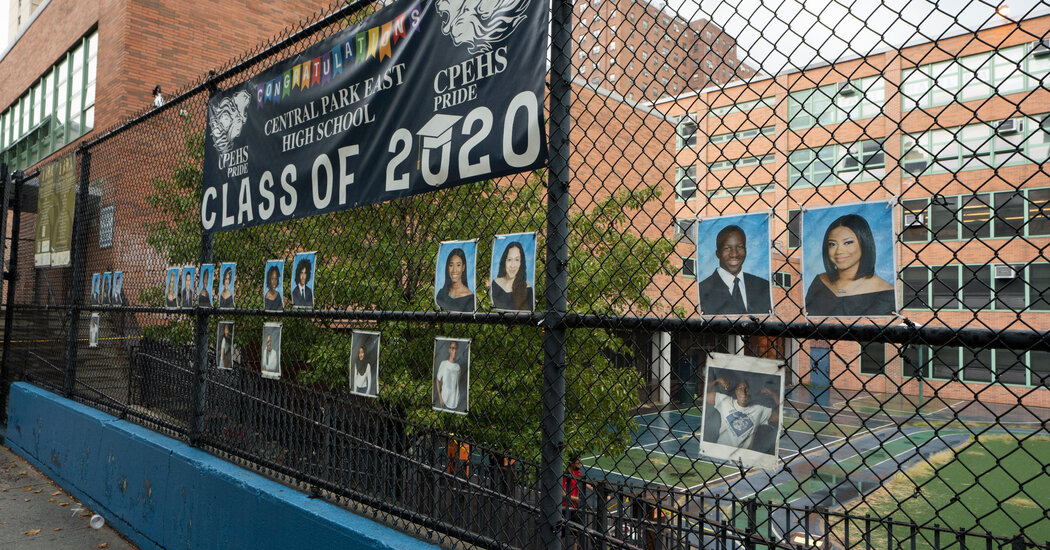 Coronavirus testing tents will be constructed outside New York City schools. More than 10 percent of students and teachers will get a nose swab once a month. At $70 per test, the operation could cost the city $10 million per month.

Bringing children back to classrooms in the nation’s largest school system was already a monumental challenge. Now New York City is also rushing to set up mandatory random testing at 1,800 schools by Oct. 1 — a last-minute wild-card mission that no other major city has tried.

Mayor Bill de Blasio, a Democrat who has staked his legacy on reopening schools during the pandemic, said his administration can pull off the testing endeavor, even as city officials scramble to address other safety concerns before schools reopen for in-person learning on Sept. 21.

“It will be done every single month,” the mayor said on Tuesday. “It will be rigorous. We’re going to be looking constantly for any signs of a challenge we have to address.”

As children across the globe slowly return to school this week, most schools that are reopening classrooms are not requiring testing. Health officials in New York pointed to Luxembourg, a tiny European nation with a population less than half the size of the Bronx, as the only place that had tried something similar by testing all of its high school seniors before reopening.

In Los Angeles, school officials have worked for months to plan a robust testing system after delaying in-person learning. Their program is expected to cost $150 million.

New York City, the only major school district in America attempting to reopen, is trying to create a coronavirus testing system on a much faster timeline.

“It strikes me as being very ambitious,” said William Hanage, an associate professor of epidemiology at Harvard University. “I’m glad they’re doing it, but I think it would be better if they’d been planning to do this in advance.

“This is not something that is easy to pull out of a hat,” he added.

Mr. de Blasio moved this week to delay the reopening of schools from a start date of Sept. 10, agreeing to the testing program to avoid a teachers’ strike. The teachers’ union also wanted more time to address other issues, including hiring nurses for every school and upgrading ventilation systems in classrooms.

The goal of random testing is to identify students and teachers who have the coronavirus and do not have symptoms, city officials said. But testing in New York has already been plagued by delays. Some people have waited more than two weeks to get results, rendering them essentially useless.

Avery Cohen, a spokeswoman for the mayor, said the schools testing plan was “entirely unprecedented in its size and scope, building on our city’s reputation as a world leader in making testing available to all.”

On Wednesday, the city announced it had hired a company called Fulgent Genetics to conduct the school testing.

About 34 percent of parents have decided to keep their children at home for remote learning, but that leaves more than 600,000 students who could attend school in person.

The city is planning to randomly test about 10 percent to 20 percent of students, teachers and staffers at each school once a month, which could mean processing 60,000 to 120,000 tests every month. Officials hope to return test results in 48 hours and provide individual students with their results, city officials said.

Each test costs about $70 to $90 — a steep bill for the city at a time when it is in financial crisis. Mr. de Blasio has warned that he might have to lay off 22,000 city workers next month.

The city’s health and hospital system will oversee the schools testing program and is likely to rely on school nurses to help administer the tests. The city is contracting with additional labs to process test results and is working to secure a partnership with a lab in New York City.

“We’re looking at different innovative strategies to expand our testing capacity, including a stand-alone lab, and will have more to say soon,” Ms. Cohen said.

The latest on how schools are reopening amid the pandemic.

The powerful union that represents teachers, the United Federation of Teachers, said that as part of its agreement with Mr. de Blasio, children who do not have parental consent to testing will be required to learn remotely at home. School staff who choose not to participate will be put on unpaid leave, the union said.

Critics say the testing plan raises logistical concerns and is too intrusive. Steven Matteo, a Republican councilman from Staten Island, sent Mr. de Blasio a letter with a list of questions: Who will perform the tests? Will children miss class? Can parents be present for the test?

Joseph C. Borelli, another Republican councilman from Staten Island, said barring students from school if they refuse to be tested was “an astounding stretch of authority.”

“We must fight,” Mr. Borelli said on Twitter, urging parents to call the school chancellor’s office.

Mr. de Blasio had resisted calls from the teachers’ union to require mandatory testing and repeatedly argued that other school districts that had successfully opened did not require it. But union leaders demanded testing to help protect teachers who are afraid to return to classrooms.

Michael Mulgrew, the leader of the teachers’ union, said testing was an important part of the city’s safety plan, along with social distancing, wearing masks and cleaning classrooms.

“We’re going to make sure that if there’s any signs that there could be a problem, that we’re in there as quick as possible and stopping it very quickly,” he said.

Some private schools and universities are conducting more aggressive testing, as often as twice a week. The Rochester Institute of Technology in New York is even testing sewage for genetic evidence of virus shed in feces.

Mr. de Blasio said he was confident that most parents would agree to testing, noting that children would receive a “self-swab” test using a short Q-tip.

“It is the Q-tip, not the long apparatus that goes farther up your nose,” the mayor said. “I did that one. I don’t want to do it again.”